Today, we expect a number of court decisions related to the Laurentian U insolvency, the dissolution of the federation, and perhaps a few other bombshells… but there’s no big news yet, and it’s nothing to celebrate.

I guess today you can celebrate “International Dance Day,” “We Jump the World Day” (if you’re into Parkour), “World Wish Day” (thanks to Make-a-Wish Foundation), or even “Zipper Day” (since the patent for Gideon Sundback’s “hook-less fastener” was issued on Apr 29 1913). But sadly after a year of pandemic isolation, the idea of dancing with others, free running in the city, blowing out candles, or wearing pants that aren’t sweatpants seems far, far away…

Personally, I’ll be meeting up with my university CMOs this afternoon, and dropping in on my eldest’s illustration grad show at Sheridan tonight!

This morning, I want to take a break from Laurentian and the Pandemic (sort of), to focus instead on application and admissions news from Canada and the US…

Naturally, the pandemic has had an impact on student mental health, career aspirations, family finances, and attitudes towards the appeal of campus life and experiential learning. It also seems to be impacting student choices of major and program… 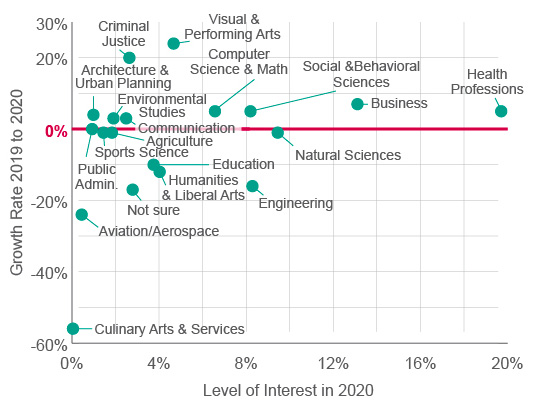 The pandemic seems to have shifted the choice of major for incoming US undergraduate students in measurable ways. Understandably, from 2019 to 2020, interest dropped significantly in aviation/aerospace (-24%) and culinary arts (-56%). Students gravitated towards health professions (+5%), business (+7%), and computer science (+5%), while accelerating a long-running trend away from the humanities and liberal arts (-12%) and education (-10%). “Watching teachers struggle with online learning or enforcing COVID restrictions may not have helped education, in particular.” But perhaps driven by the pandemic and current events, they really embraced criminal justice (+20%) and environmental science (+17%), and perhaps also social and behavioural sciences (+8%). While the plague has closed our theatres, it’s harder to see what is driving growth in visual and performing arts enrolments (+24%). And why a -7% drop in Engineering?  Encoura

While we don’t get timely national data on CdnPSE enrolment, the closest thing we have is the release of application data from Ontario’s universities…

OUAC has released application data as of Apr 7, giving us a better look at enrolment trends heading towards Fall 2021. (See below for what it suggests about the fortunes of individual universities.) Compared to last year at this time, some programs appear to be big winners, attracting more high-school-direct applications, particularly Health Professional and Related Programs (+18.9%), Nursing (+16.9%), and Biological and Biomedical Sciences (+14.8%). Clearly, the visibility of health professionals, and our universal obsession with immunology and epidemiology, has significantly boosted student interest in these fields. HS-direct applications are also up in Computer and Information Science (+12.8%) and Psychology (+4.1%). On the other hand, the biggest declines in HS-direct applications this year are Natural Resources & Conservation (-18.3%), Languages & Linguistics (-16%), Agriculture (-11.5%), Communication & Journalism (-10.9%), Fine & Applied Arts (-10.4%), and General Science (-10%).

(I’m not saying this is GOOD, just that it’s happening.)

Granted, the recruitment/enrolment cycle in American colleges is quite a bit different from CdnPSE. There’s far more stress over SAT exams, application essays and interviews, legacy admits for the children of alumni and generous donors, not to mention multi-million-dollar fraud schemes. The blend of elite private colleges, state universities and local community colleges – and the wide range of tuition fees – create a much larger range of hierarchies and rankings. But nonetheless, a few enrolment trends are worth noting…

Applications to the most prestigious US colleges have rebounded as many Americans feel growing (perhaps premature) optimism that the pandemic is behind them. It also helps that many have gone test-optional or even test-blind, since the pandemic has made test administration challenging (and as many advocates predicted, the diversity of their classes increased as a result). This spring, Harvard received more than 57,000 applications for fewer than 2,000 places – up +4.25% from last year. Applications also surged this year to Colgate U (+103%), MIT (+66%), Boston College (+36%), Tufts U (+35%), Yale (+33%), and uPenn (+34%). As a result, admission selectivity is up, and acceptance rates are some of the lowest on record. Instead of accepting 6.1% of applicants, Columbia is now down to just 3.7%, thanks to a 51% increase in applications. Princeton is down to 4%.  Campus Review

“In the short run, the promises of the test-optional proponents were all confirmed. Colleges ended up with more applicants, more qualified applicants and more diverse applicants and that was reflected in who they admitted.” – Bob Schaeffer, Executive Director, FairTest

The chase for admission into the Ivy League “grew a few more degrees frenzied during the coronavirus pandemic as applications soared and acceptance rates plummeted to, in some cases, crazy-low single digits.” Although the vast majority of American colleges offer admission without the angst, “it is the angst that fuels the fascination” with the most prestigious institutions. Last year, Cornell announced it wouldn’t immediately share its acceptance rates “to reduce the ‘metric mania.’” The deadline for students to accept their offers is May 3.  Washington Post

“I applied to these Ivies just for the sake of applying… Surprisingly, I wasn’t surprised LOL. Rejected #Ivyday.” – Twitter user, cited in Washington Post

At many Ivy League institutions, students who deferred admission last year are being admitted along with this year’s class. (Some, like Harvard, intend to increase the size of the entering class so that this year’s high school graduates aren’t disadvantaged.) Others, like Yale, have 300 students returning from a gap year and are making admissions more competitive than ever. (Duke U reports that 10% of its incoming class will be taken by students who deferred admission last year.)  Slate

Other selective US colleges are also “going to have a very good year” when it comes to admissions, because students have pandemic-year time on their hands to complete extra applications just out of curiosity. Colby College (ME) attracted a record 15,857 applicants, and has cut their acceptance rate from 13% in 2019 to just 8% now. Williams College (MA) and Swarthmore College (PA) are also down to an 8% admit rate. uGeorgia saw applications rise 40%. Many institutions are reporting increased diversity among their incoming classes, along with higher academic averages, despite going test-optional. Overall, there was an 11% increase in applications through the Common App, but just a 2% increase in applicants – meaning record numbers of applications, lower yields, and plenty of waitlist activity. But the “trickle-down” effect for less-selective institutions is that they have to admit more applicants, will have shorter waitlists, and “will be subject to the waitlist decisions of schools further up on the prestige scale.”  Inside Higher Ed

Some trends I noted back in February seem to be continuing…

OUAC reports that, as of Apr 14, applications to Ontario universities for Fall 2021 are up by 31,265 (+4.7%) over last year. While high-school-direct applications are up 11,021 (+2.4%), the increase is driven particularly by non-direct applicants, up 20,244 (+10%). (These include mature students, PSE transfers, out-of-province and international applicants. Note that an increase in applications could reflect students cross-applying to multiple institutions.)  CBC

Gravitating to the Top

So far, the repercussions of Laurentian’s Feb 1 insolvency announcement appear to have had only subtle impacts on application numbers. Non-HS applications are pretty much level with last year (-0.1% as of Apr 8) – although provincewide those applications are up +10%, so perhaps that isn’t very healthy. HS-direct applications tend to reflect reputation and competitive positioning better, because those applicants are more willing to consider relocating. HS-direct applications to LU were down -2.7% over the previous YTD on Jan 17, and that was only slightly worse by Apr 8 (-3.3%). LU attracted just 11 more HS-direct applications in the 2 months from Feb 4 to Apr 8, compared to 91 last year – so perhaps they have lost 80 applications that they might otherwise have gained, due to the CCAA proceedings. HS-direct applicants have largely applied by January, and after that point tend to adjust the order of their “choices” rather than withdrawing applications entirely. So perhaps it’s telling that the 11 new LU applications in April were unanimously 4th choice or worse, and that 29 others – half of them formerly 1st choice LU – dropped LU to their 4th choice or worse. And none of these stats yet reflect the scores of programs cancelled on “Black Monday,” Apr 13 – so the next OUAC update will almost certainly look worse for LU. The real proof will be in the pudding – confirmation stats this fall.

Since Tuesday, there have been 6 more cases of COVID19 reported by CdnPSEs. (See my master spreadsheet for a running tally of 2,600+ cases in CdnPSE since Sept 2020.)

Briercrest College (SK) proudly announced Tuesday that they completed the academic year on campus, “with zero COVID19 transmissions or outbreaks.” (There were 2 positive cases, identified upon arrival in Sept and Jan during precautionary testing.) Two-thirds of Briercrest’s almost 500 students lived in dorms this year.  Briercrest

UNB’s outbreak in the Magee House residence has grown to 8 cases (from 6 reported earlier). Residents, family members and staff were being retested yesterday, and residents and staff in the Elizabeth Parr-Johnston residence are still awaiting test results from Tuesday. All are currently self-isolating. The “essential services” model has been extended at UNB until end of day Sunday.  Global

NSCC has reported 3 cases in the past week.  NSCC

UBC Okanagan released an artistically-shot 1:40min video yesterday that effectively showcases its state-of-the-art facilities set in the beautiful Okanagan Valley, with understated music and almost ASMR soundtrack. “Raise your hand or get them dirty… Wherever you’re from, wherever you’re headed… Choose a path that’s uniquely yours.”  YouTube

As always, thanks for reading!

Expect a lot of news from Sudbury in tomorrow’s issue. Meanwhile, please do drop me a line if you spot something else interesting, thought-provoking or cool out there!

Stay safe, and be well,