It’s funny how I never quite know where the day’s news will take me when I sit down to write this newsletter each night.  I’ve been busy enough for the past 2 weeks that I haven’t taken the time to examine the latest Ontario university application stats until now, and I think we can see at least 2 clear patterns in the year-over-year changes, which I have graphed for you below.

Let’s call them the Amazon Effect, and the Fauci Effect. See what you think, and let me know if you have a better explanation.

Although still preliminary, Ontario’s University Application Centre has released application data of high-school direct applicants for full-time programs in Fall 2021, as of Jan 16. This does not include many international applications, mature student or transfer student applications, but comparing it to previous years may be a leading indicator of trends for fall enrolment… 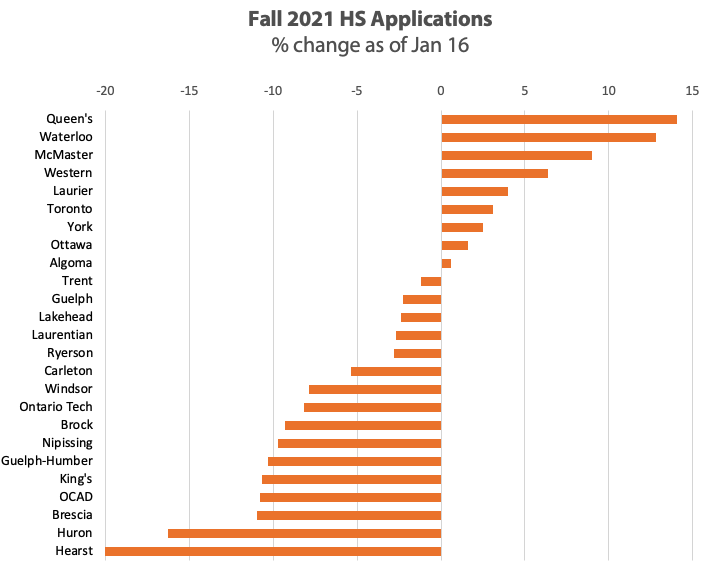 Graph of % change in HS direct FT FY applications to Ontario universities for Fall 2021, as of Jan 16, based on OUAC data.

The COVID19 pandemic has been brutal to small retailers, as anxiety about small enclosed spaces has driven consumers to multinational online platforms with convenient technology and delivery. It’s been pretty clear that last Fall’s enrolments swung in favour of top brand universities, at the expense of smaller and more remote institutions, too. And now, OUAC’s data suggests the same thing may be happening – perhaps to an even greater extent – for next Fall.

Queen’s U reports its high-school-direct applications for Fall 2021 have surged +14% compared to last year, to ~45,000 – for just 4,700 spots. (The overall Ontario university average is just +2.3%.) Applications from self-identified Indigenous students are up +26% at Queen’s, and first-generation PSE students +19%. Even international student applications are up +11%. In particular, applications to Nursing at Queen’s are up an astonishing +60%.  Global

On the other hand, the institutions struggling most, at least as of now, are the small affiliated or federated colleges, Hearst (-51.4%), Huron (-16.3%), Brescia (-11%) and King’s (-10.7%). Traditionally, these small colleges within larger university campuses (Western and Laurentian) have attracted students as nurturing, human-scale communities where students get to know their profs, classes are less intimidating and leadership opportunities are well within reach.

I’m going to go out on a limb here and suggest that what we may see happening is that, with the pivot to nearly universal online learning, applicants aren’t seeing the “personal touch” as so much an attraction anymore. Instead, they seem to be opting for top name brands, or the institutions they think will provide sophisticated online learning and supports at scale. (I don’t have the data to say for sure whether Western’s gain is the affiliates’ loss, but if in fact applicants are gravitating towards main campus, it may reflect a certain “online fearlessness” of larger classes in a virtual environment.)

Like shoppers, who are opting for the convenience of massive online retailers instead of the cramped quarters of a local main street store, high school students seem to be attracted to the security of bigger institutions, rather than the comfort of more intimate ones.

With the pivot to nearly universal online learning, high school seniors don’t seem to be attracted to the “personal touch” of the smaller university experience this year. Instead, they’re opting for big names with solid infrastructure to deliver the student experience at scale. It would seem they aren’t as intimidated by large virtual classrooms.

Kudos to the Outliers

That being said, Laurier’s recruiters seem to deserve some credit for beating the odds. With 25,839 applicants (so far) they aren’t truly small, but are #12 in size by applicant pool – and yet they have the #5 increase in applications, right up there with Western and Toronto. Likewise, tiny Algoma seems to have done well, albeit with just 698 applications, to have stayed level with last year’s numbers.

(P.S.  I’m behind about 2 weeks in much of my reading, so I finished this whole newsletter before checking my pal Alex Usher’s blog.  Sure enough, he provided some analysis of the OUAC stats too, although as usual he saw things a bit differently. His “flight to big schools” aligns somewhat with what I’m describing. But where I focused on total applications, Alex emphasized first-choice applications: uToronto looks far better in his graph, Queen’s far worse, and the affiliated colleges were omitted. Not only are students more likely to apply to the big schools, but they are even more likely to shoot for them as their first choice.)

OUAC’s data on HS-direct applications to university for FT first-year programs this Fall reveals the impact of 12 months of pandemic on the psyche, and career aspirations, of young Ontarians… 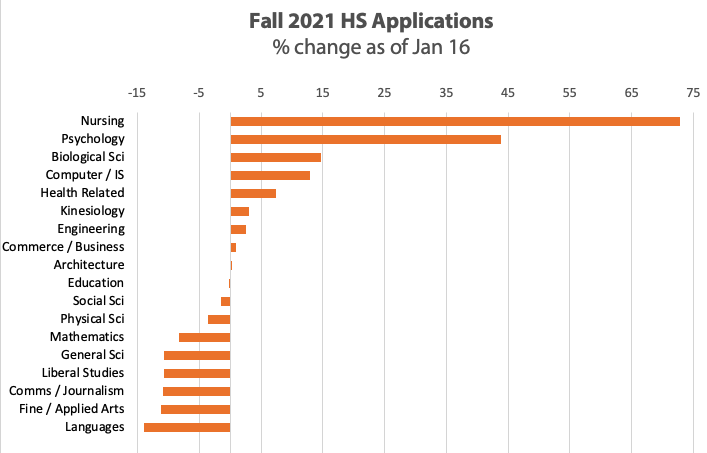 Graph of % change in HS direct FT FY applications to Ontario university programs for Fall 2021, as of Jan 16, based on OUAC data.

It’s an oft-shared anecdote that enrolments in archaeology soared when Spielberg’s Indiana Jones movies hit theatres back in the ’80s. Likewise, when we look at the biggest gains in applications by program, it seems clear that a year of pandemic has prompted major increases in applications to nursing (+72.8%), psychology (+43.9%), biological and biomedical sciences (+14.7%), health professions and related programs (+7.5%).

The huge surge in health program applications, along with rising interest in computer and information science (+13%) and engineering (+2.6%) may explain much of the gains we saw above for Queen’s, Waterloo, McMaster and Western.

Full disclosure: I’m someone who pursued 3 degrees in English language and literature, and I was raised by a History professor. Still, I’m certainly not alone in believing that critical thinking, communication skills and creativity are increasingly in demand from employers, and will be ever-more essential for young grads heading into the tsunami of a global pandemic-induced recession plus the fourth industrial revolution of automation through robotics and artificial intelligence. (That will be the subject of a whole issue sometime, but in the meanwhile check out my Ten with Ken on “Interdisciplinarity and Soft Skills.”)

Nevertheless, clearly the high school seniors out there still aren’t believers. Enrolments in liberal studies around the world have been in decline since the 2008 recession, and if this year’s stats are anything to judge by, things look even bleaker for next fall. The biggest year-over-year application declines (for Ontario high-school students at least) are in languages and linguistics (-13.9%), fine and applied arts (-11.2%), communication and journalism (-10.9%), and liberal arts and sciences / general studies / humanities (-10.7%).

Students aren’t wrong to worry about employment prospects in journalism, of course. And the academic aspirations that might have led students to pursue other humanities disciplines with an eye to the professoriate could be justifiably diminished, considering how many would wind up trapped in a lifetime of limited-term contracts or adjunct positions. I’m convinced the pendulum will swing back on humanities enrolments, but evidently one year of isolation and reflection wasn’t enough to do it.

I’m convinced the pendulum will swing back on humanities enrolments, but evidently one year of isolation and reflection wasn’t enough to do it. Applications are down 10-14% from last year.

Despite the rising popularity of health, computing and engineering programs, it’s also striking that applications to math and sciences generally are down among high school seniors in Ontario this year. General science is down just as much as liberal studies (-10.7%), but so are mathematics and statistics (-8.2%), and physical science (-3.6%).

The long-term rise in careerism may well explain much of this, as students focus on non-academic career paths and see engineering or computer science as more obviously connected to employment prospects upon graduation. (Perhaps the more we lament the crisis in higher education, intensified by the pandemic, the more we will scare prospective students away from academic career tracks.)

But I also wonder whether these high school seniors, who will have endured more than a year of remote instruction, are in fact struggling in their math and science courses to such a degree that they are turned off from pursuing these programs at university. (So far I’ve only seen mention of course failure rates skyrocketing in many school districts, but they haven’t specified which subjects. Some province-wide data would be nice.)

More contagious variants of COVID19 and resurgent infection rates have led to abrupt about-faces at MUN and Queen’s, as CdnPSE continues to accept the inevitable and move events online for 2021 – although some institutions are also making optimistic plans for Fall…

uGuelph announced yesterday that the June convocation will be held online this year. Parchments for Winter 2021 grads will begin arriving in mid-Feb.  UofG

Memorial U is responding to the sudden rise of COVID19 cases in the province by transitioning its St John’s, Signal Hill and Marine Institute campuses to fully remote teaching, learning and work environments for the next 2 weeks. (Just days ago, MUN was mandating a return to work on campus for many staff.)  MUN Gazette

Queen’s U has reversed its position announced just days ago, when it was “tentatively” scheduling homecoming events for Oct 15 and Oct 29. Instead, there will be no in-person homecoming events in 2021 – returning to the virtual “Homestaying” format of last year.  Global

uLethbridge announced yesterday it is “planning for a significant return to campus” this Fall, anticipating positive developments in fighting the pandemic over the coming months. UofL will offer “as many course experiences on campus as possible” while complying with PHO orders. (The summer semester will continue to be a blend of F2F and online.) uLeth anticipates a “significant increase” in campus housing occupancy this fall too.  UL

“I am so proud of the resiliency our community has shown during this time and excited about the prospect of seeing the lively, energetic campus atmosphere we’ve all missed so much. It will be great for our students to begin to once again experience the social and academic benefits a more traditional in-person setting offers.” – Mike Mahon, President, uLethbridge

Since Monday, I have added 3 more COVID19 cases associated with CdnPSE. (Many cases go unreported, but see my master spreadsheet for a running tally.)

Durham College reported a new case at its Oshawa campus yesterday. The individual was last on campus Jan 26.  DC

NAIT reported 2 confirmed and “linked” cases on main campus, among “individuals from the same program” who were last on campus Feb 4-5. Another 12 individuals from the NAIT community were identified as close contacts, and have been required to quarantine.  NAIT

On Monday I shared Georgian College’s conversion video, portraying offer packages being delivered via drone to 3 surprised Mechatronics applicants. Although less elaborate, I came across this lively 1-min video from Niagara College yesterday…

Niagara College recruiters show highlights of 85 offer packages and “keep warm kits” being delivered to applicants across Ontario, as captured on social media. The video ends with an invitation to attend a virtual spring open house on Mar 27 for a chance to win a $100 Visa gift card, or a $3,000 tuition credit. Nicely done! YouTube

Thanks for reading! Stay safe and be well,