I should have used Dalhousie U’s annual “George Munro Day” as my excuse when I took Friday off – at least I wasn’t alone in taking a breather.

It’s been a week since I last summarized the state of the pandemic (see Vaccine Vexations), so here’s what you need to know since then. In a nutshell: cases are dropping but still high, provinces are reopening their economies, but variants are spreading rapidly and the SA strain is alarmingly resistant to natural immunity and vaccination alike…

Thankfully the COVID19 story is no longer about astounding spread or overwhelmed hospitals, so much as about cautious reopenings and frustrating delays in vaccination. (Although the prospect of serious viral mutations still hangs over us.) As more and more institutions express confidence that students will return to campus this Fall, the precise timing of herd immunity and potential ways to manage vaccine records will be crucial to CdnPSE planning… 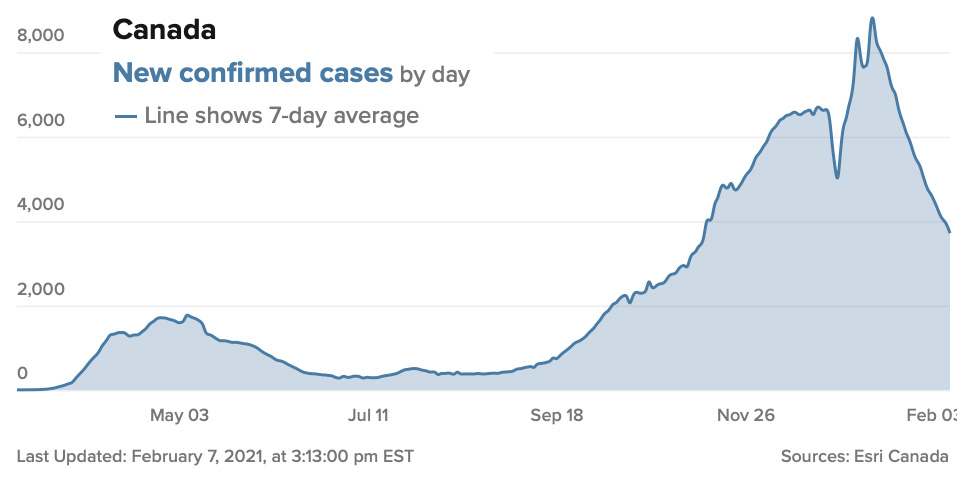 In most parts of the world, the COVID19 infection curve continues to subside after its post-Christmas peak, and thanks to some more aggressive lockdowns – but of course, we’re still logging thousands of new cases every day in Ontario and Quebec, and scores of deaths. (Quebec alone surpassed a total of 10,000 pandemic deaths on the weekend.) 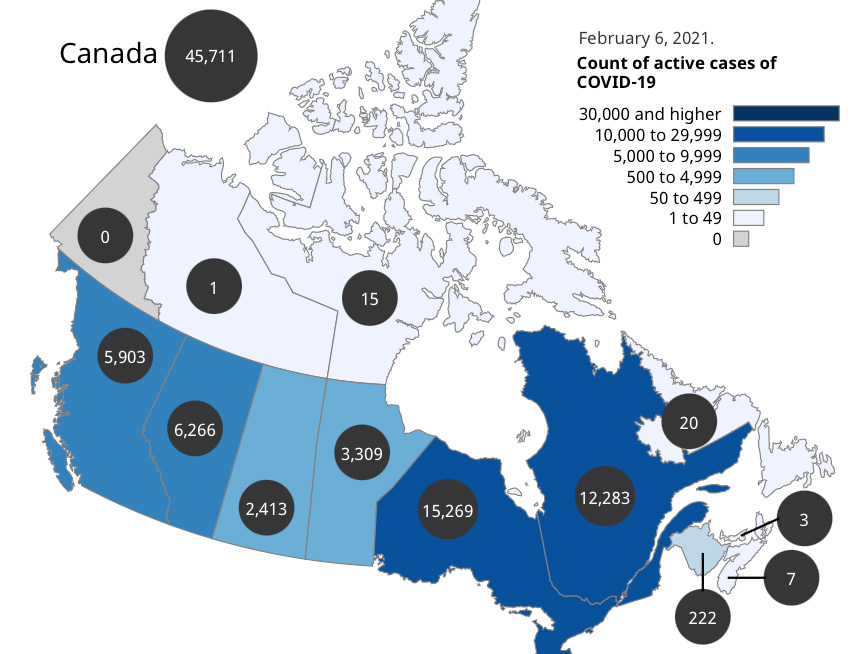 It’s alarming to see another 11 cases at the Cargill meat plant near High River AB, which processes about a third of Canada’s processed beef. Last spring, half of Cargill’s workforce there – 950 employees – tested positive in Canada’s largest-ever outbreak. RCMP are still investigating one fatality there, and a class-action lawsuit has been launched against the company. There are currently outbreaks in 6 other meat processing facilities in Alberta.  CBC

“Even with the steady two week decline, case counts are still about double what they were at the peak of the first wave, so easing of restrictions will need to be done gradually and cautiously. As well, there is continuing concern in Canada and internationally around more transmissible virus variants.” – Theresa Tam, Chief PHO, Canada

With more aggressive variant strains of COVID19 spreading, we may yet regret it, but much of Canada is reopening as the infection curve drops and hospitals gain some breathing room…

Ontario is returning many K-12 students to classrooms today, and expanding emergency childcare for frontline workers starting tomorrow, so it can gradually reopen the economy. The Ministry says it has set aside funding to hire 4,290 additional teachers, 2,200 custodians, and 623 public health nurses to support schools. The province is considering cancelling March Break, to be announced later this week, and is rumoured to be planning to lift its state of emergency tomorrow, gradually returning to its colour-coded framework. Several regions would move into “green zones” on Wednesday, while “hot zones might be a week later.”

Quebec is allowing CEGEP and university students to return to classrooms once a week, although in red zones class capacity would be reduced by 50%. The decision apparently came as a surprise to many, and poses logistical “nightmares” for students and faculty alike.

Nova Scotia is loosening restrictions effective today, allowing retail businesses and fitness facilities to operate at 75% capacity, and allowing gatherings of up to 150 people outdoors, or 50% of capacity up to 100 people indoors. (Informal gatherings are limited to 10 people.)

On the other hand, BC has extended the pandemic restrictions in place for the past 3 months, indefinitely: social gatherings are restricted to immediate households only, all events are banned, and masks must be worn in indoor public spaces. “We need to protect the progress we have made and not squander our progress,” said PHO Bonnie Henry.

“We need to protect the progress we have made and not squander our progress.” – Bonnie Henry, BC Provincial Health Officer

Of course, the biggest wild card in the pandemic right now is the rise of variants. Numerous recent studies suggest that the novel coronavirus may be particularly adept at recombination, “allowing the virus to shapeshift in dangerous ways” within a single patient. In all, researchers have identified ~4,000 COVID19 variants, although only a few pose major threats to vaccination efforts. In most cases, the problem is that they are far more contagious – potentially meaning even brief interactions could spread the virus, not just the usual 15-min “close contacts” we have been tracing for the past year. “In reality, 5 minutes in an elevator with poor ventilation could lead to transmission. There’s nothing magical about Minute 15.”

The UK variant (B.1.1.7) continues to spread worldwide, with 71 cases in Alberta, 174 in Ontario, >14 in BC, 8 in Quebec, 4 in New Brunswick and 2 in Saskatchewan – and since it is doubling every 10 days in the US, it is expected to become the dominant strain there by March. It has been responsible for major surges in Ireland, Portugal and Jordan – and another new mutation in Britain has the potential to make vaccines less effective.

Less widespread is the Brazilian variant (B.1.1.28.1), although late yesterday the first case in Canada was reported, involving a Toronto resident who recently travelled from Brazil.

Most serious is the South African variant (B.1.351), which seems capable of infecting people even after they recover from other strains of COVID19, and resists the existing vaccines. There are already 7 known cases of this variant in Alberta, >5 in BC, and 1 in Ontario. Moderna and Pfizer have only indicated that their vaccines are less effective against the SA variant. J&J’s is 57% effective, while Novovax’s is just 49% effective. AstraZeneca offers such “minimal protection” that the country has suspended plans to vaccinate front-line healthcare workers, even though it has 1M doses in hand now. AstraZeneca is “tweaking” its vaccine to test against the SA variant by Fall.

Researchers at uWashington warn that the US could reach 630,000 COVID19 deaths by Jun 1, and still worse, that emerging variants could make it much worse, if “herd immunity is only variant-specific.” Anticipating that the newly immunized may quickly seek to travel, they also urge “concerted efforts to avoid rebound mobility in the vaccinated.” Britain’s vaccine deployment minister said yesterday that annual vaccinations are “very probable.”

“We see very much probably… an annual [vaccination] in the way we do with flu vaccinations, where you look at what variant of virus is spreading around the world.” – Nadhim Zahawi, UK Under-Secretary of State for Vaccine Deployment

The good news is that a number of pre-print studies suggest that the COVID19 vaccines not only protect against serious illness, but also suppress viral transmission. AstraZeneca claims their vaccine reduces positive swabs, and therefore the ability to transmit the virus, by 67%. (Critics warn that’s “a leap of science” that remains to be proven, and the AZ clinical trials have certainly been complicated by dosage errors.)

There also seems to be some evidence that a single dose provides reasonable protection for up to 3 months, and that in fact the AstraZeneca vaccine is even more effective if the second shot is delivered 3 months later, rather than 6 weeks. This seems to justify the decision of some jurisdictions to vaccinate as many people as possible to try to stop the spread of the COVID variants. “The growing threat of the variants has turbo-charged the need for speed.” Some experts are concerned, however, that delaying the second dose could theoretically nurture new vaccine-resistant strains of the virus .

J&J: All the better, then, that on Thursday, Johnson & Johnson applied for FDA emergency use authorization for its new single-dose COVID19 vaccine, which it claims is 66% effective and 85% effective at preventing serious symptoms. Anthony Fauci says the J&J vaccine could be authorized “within a week or so.”

Novovax: Another vaccine candidate from Novovax showed robust protection in a UK clinical trial, and is now being trialed in the US. The company hopes to get FDA authorization as early as April, and would provide the US with 110M doses by the end of June. Novovax also claims its new vaccine is 89% effective in clinical trials.

Mix & Match: As more vaccines get authorization, and deliveries become unpredictable, many are starting to ask whether we can “mix and match” vaccines and boosters from different manufacturers. The first formal study began last week in the UK, combining Pfizer and AstraZeneca vaccines. (Results will be available in 13 months.)

Vaccine manufacturing and distribution is continuing to experience more and more unexpected delays. Canada’s delays have become so bad that the government is accepting up to 1.9M doses from the Covax Facility, a WHO initiative intended to assist 140 developing countries. (No other G7 country is drawing doses, although New Zealand and Singapore are.)  Washington Post

“No rich country right now is doing enough… and we are about to fall off of a cliff from which I’m not sure we can return. But I feel like it’s a little bit rich to give Canada such a hard time when they’re clearly not outperforming anyone in terms of actual vaccines delivered or vaccines administered.” – Andrea Taylor, Global Health Innovation Center, Duke U

US president Biden is actively considering the feasibility of a digital “vaccine passport,” and Denmark has announced they will roll out there by June. The IATA has developed a “digital travel pass” which will be required by several mideast airlines in the next few weeks. IBM is working on a blockchain Digital Health Pass. The World Economic Forum is testing a CommonPass digital health passport. (Proof of negative COVID19 tests are already required before boarding flights to many countries, with tests required upon arrive and during quarantine in many regions. As vaccination becomes more common, evidence of COVID vaccination may be required instead – and perhaps will even be required of students or faculty who wish to attend classes on campuses.)  New York Times

American higher education is astoundingly diverse, and its response to the COVID19 pandemic has been accordingly variable, under the Trump and Biden administrations…

Liberty U is controversial at the best of times (you may recall that president Jerry Falwell Jr stepped down last August over a bizarre sex scandal), but last week the new acting president was apologizing for hosting a Jan 31 snowball fight involving hundreds of unmasked students crowded together.  WFXR

uMass Amherst tightened campus restrictions last week after a “concerning rise” in COVID19 cases among undergraduates – 239 new cases in the first 3 days back on campus for the Spring semester. (Campus residences are operating at 39% capacity, almost 5x the density of the Fall semester.) Starting last Friday, UMA has imposed bans on student gatherings of any size, on visitors to campus, and on in-person dining. Classrooms and labs remain open, with PHO protocols in place.  Boston Globe

Villanova U (PA) logged 478 new cases of COVID19 since Jan 19 – more than the entire Fall term – and has told students to “stay in their own residence to the greatest extent possible” — but still attend F2F classes. (Sigh.)  Villanova

Duke U (NC) is also seeing more cases now than in all of the Fall term (296 since Jan 3), and administrators are warning that at this rate “we may not be able to complete the semester as we started… That could mean going completely remote.”  Duke Chronicle

UNC Chapel Hill reports 179 reported violations of COVID19 safety protocols on campus in the past 3 months. 88 resulted in “developmental action” and 9 in evictions from campus housing.  US News

Since last week, I have added 2 more COVID19 cases associated with CdnPSE. (Many cases go unreported, but see my master spreadsheet for a running tally.)

Over recent years, higher ed has raised the bar numerous times for elaborate acceptance letter packages, from confetti to virtual reality. On Pi Day 2015, MIT even imagined deploying drones with acceptance letters. Now, under the pandemic, one Ontario college brought that idea to life for selected students…

Georgian College decided to boost the excitement of acceptance letters to a whole new level this year, delivering the good news via “AirGrizzly” drone to 3 “very surprised” applicants to the Mechatronics program. Georgian marketers took the opportunity to capture these heartwarming moments – although “all other acceptance offers were sent out the traditional way.”  Georgian News   |  YouTube

Thanks for reading. I hope your week is off to a smooth start!