In last week’s “Hindsight is 2020” issue, I summed up some interesting trends from last year, and potential lessons for higher ed. This week I’m going to share some selected predictions for the year ahead, from a pile of 75 articles and reports I’ve collected in the past 2 months. (But I’m going to pace myself across the week, so it won’t all be in one long issue!)

But first, some updates on the pandemic, and another 103 cases at CdnPSEs (bringing my tally to at least 1,173 since the Fall term began).

As briefly as I can, here are some new developments in the pandemic since my last summary on Thursday: 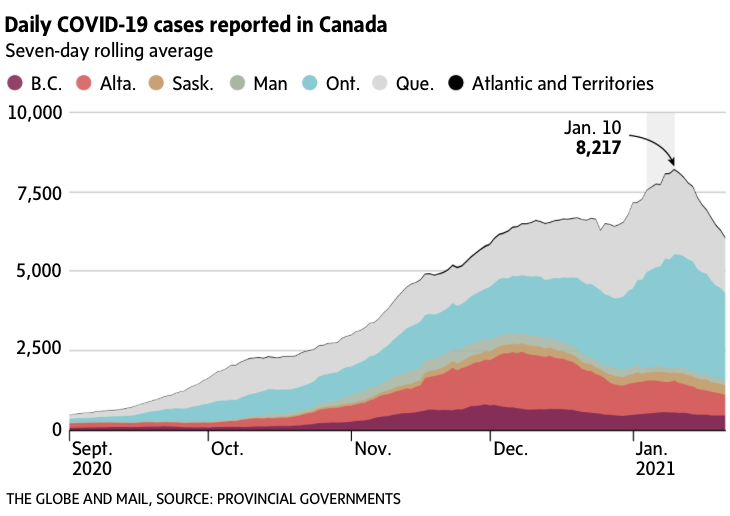 Canada surpassed 20,000 COVID19 deaths as of yesterday, although the infection curve has already dropped significantly. (“Grim milestone,” like “unprecedented,” “resilience,” and “global pandemic,” have become keyboard shortcuts for journalists this year.) Canadian airlines have cancelled all flights to the Caribbean and Mexico as Canada announced new hotel quarantine and COVID testing requirements for travellers. Mexico’s death toll surpassed India’s late last week, despite having a tenth the population – making it the third highest in the world after the US and Brazil.

Australia: After 10 months without any locally acquired cases of COVID19, the city of Perth Australia has imposed a 5-day lockdown stricter than most in Canada, because a single quarantine hotel guard tested positive. That’s the kind of swift and decisive action we can only dream of here: an Aylmer church is still being allowed to hold indoor Sunday services, and one Regina bar-owner is fighting a $14,000 ticket because she found PHO requirements “confusing.”

More vaccine delays have hit Canada. Ontario overstated its progress last week by reporting doses as if they were fully-vaccinated people (2 doses). Pfizer cut last week’s shipment by 20%, cancelled another shipment entirely, and will cut the next 2 weeks’ shipments by 80% – while urging us to squeeze an extra 20% out of each vial. Then on Friday, Moderna added to our “vaccine vexation” by announcing that shipments to Canada would be cut 20% next week as well.

The Economist calculates that Canada may not achieve widespread vaccination until mid-2022, while poorer countries, especially in Africa, will still be struggling through 2023. Australia’s Lowy Institute ranked Canada #61 out of 98 countries for its response to the pandemic, even before the vaccination delays. By comparison, the chaos and inefficiency of the US vaccine roll-out is much more promising. (So I remain somewhat pessimistic about a return to normal for CdnPSE by this September.)

On Friday, the European Union imposed export restrictions on COVID vaccines, alarming the UK and potentially prompting Oxford/AstraZeneca to prioritize UK doses. (They have already reduced shipments to Europe by 60% – but the EU only approved the AZ vaccine on Friday.) Early Saturday the EU scrambled to reassure both the Republic of Ireland and Northern Ireland that shipments to them would not be restricted. (Vaccines have become a flashpoint to underscore the ramifications of Brexit, which I covered 2 weeks ago.)

“Vaccine nationalism… [could cause a] protracted recovery [from the pandemic].” – TedrosAdhanom Ghebreyesus, WHO Director General

Variants are continuing to spread worldwide: the UK variant (B.1.1.7), which is estimated to be 70% more infectious and 30% more deadly, is pretty much everywhere now, including >100 cases in Barrie ON and a case in Waterloo. The Brazil variant (B.1.1.28.1) has been detected in Minnesota. The most worrisome is the South African variant (B.1.351), which is more resistant to vaccines and has been demonstrated to reinfect those who had previously recovered from COVID. So far, 2 cases have been detected in South Carolina, and the US banned travel from SA on Saturday. And then there’s the California variant (CAL.20C), now responsible for half of cases in LA and southern California.

The next few months will be a race between vaccination and viral variants which may become increasingly adept at evading the vaccines – especially if tens of millions of people are only partially vaccinated, become perfect incubators for vaccine-resistant strains. Social distancing, masking, quarantines, reduced density and avoiding non-essential movement or gathering will remain crucial to slow the spread (and diversification) of COVID19 variants, no matter how flat the curve appears right now.

“If we don’t get to herd immunity, or close to it, by late fall, we face the possibility of a significant third wave of the pandemic. That’s what happened in the influenza pandemic of 1918, which returned with a vengeance in 1919 to kill millions more around the world.” – David Freedman, in Newsweek

Since Friday, I have added 103 more COVID19 cases associated with CdnPSE. (Many cases go unreported, but see my master spreadsheet for a running tally.)

uGuelph’s residence outbreak has risen by 4 more cases to 61 as of Saturday.  CBC

McMaster U reports a staff member tested positive on Jan 27, and had been on campus at the McMaster Innovation Park on Jan 25.  McMaster

uToronto reports a total of 150 cases in its community since fall, 98 more cases than I had previously captured from media coverage. (Reportedly none of the cases involved students living in residence, although the enforcement of rules has varied widely between colleges.)  UofT

While I did indulge in some belated “year-in-review” observations in last week’s “Hindsight is 2020” issue, this week I want to devote substantially more energy to considering the “year-in-prospect” ahead…

In Oct and Nov, Ipsos Mori asked >23,000 adults in 31 countries what they expected of 2021. 70% reported 2020 was a bad year for them economically, but 77% were optimistic that 2021 would be better. But 61% expected people will still be wearing masks a year from now, and 47% were expecting “a new global pandemic caused by a new virus.” 41% expect life to get back to normal in 2021, but 52% think that unlikely. Economically, 32% expect their country’s economy to fully recover this year, but 60% do not. 57% expect to spend more online than in stores, and even more expect income inequality to increase. 75% expect average global temperatures to increase this year, 16% expect human extinction will occur, and 12% are anticipating alien first contact on Earth this year. Although I try to look for the upside of the pandemic, only 30% of respondents think the world will change for the better because of COVID19.  World Economic Forum

Vaccines and a New PM?

Over the holidays, Leger surveyed 1,506 Canadians and 1,003 Americans on their research panel. Looking ahead to 2021, 72% of Canadians expect to be vaccinated, 58% expect the US border to reopen, 54% say they will be hosting parties again, and 34% plan a vacation outside Canada. (By comparison, just 51% of Americans expect to be vaccinated.) Politically, 36% expect Canada to elect a new PM (expecially middle-aged Quebecers), 59% expect to pay more taxes, and 26% expect Kamala Harris to become US president. (To put it in perspective, 31% expect a Canadian hockey team to win the Stanley Cup too, which hasn’t happened since 1993.) Only 19% reported being able to work from home during the pandemic, and just 27% of those aged 18-34 attended classes remotely.  Leger

The “post-pandemic” world of 2021 won’t return to the old normal. Many people will continue working, shopping, and learning online (or at least in hybrid ways) – and fraudsters will capitalize on the shift to digital, with spam attacks, fraud schemes, and more convincing deepfakes. Businesses optimized for digital will thrive, from video games and interactive fitness to streaming video platforms and telehealth providers. Corporate offices and workers alike may relocate to midsized hub cities to cut costs or buy larger living spaces. (US examples include Austin, Raleigh, Charlotte, Miami, Birmingham and Kansas City.) The combination of airports, universities, and lower costs of living may make those cities ideal. (And perhaps provide a boost to smaller regional institutions in those markets, too!)  Inc

You may recall I wrote about the Urban Exodus and Rethinking Architecture (both downtown offices and PSE campuses) back in August. 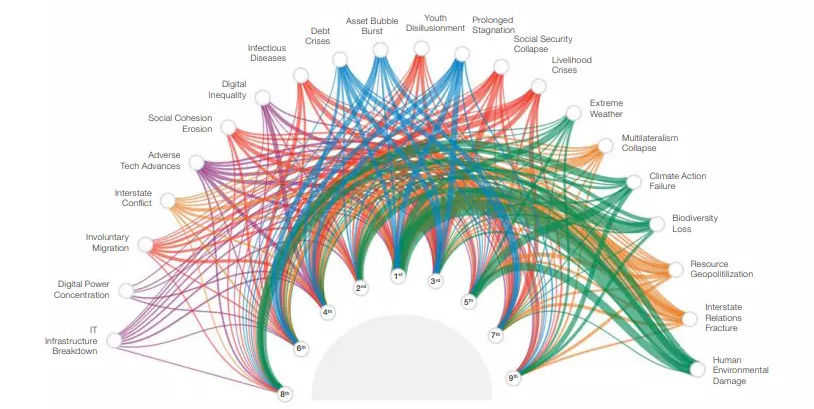 Not surprisingly, this year the WEF’s ranking of global risks has elevated “infectious diseases” from #10 to #1 in impact, followed by climate action failure, weapons of mass destruction, and biodiversity loss. Most of the top “existential threats to humanity” are environmental, including extreme weather and human environmental damage. COVID19 threatens to “scale back years of progress” on global poverty and inequality, social cohesion and global cooperation. Technology risks include the digital divide, adverse tech advances, the concentration of digital power, and a breakdown of IT infrastructure. Other drivers of risk in 2021 include youth disillusionment, an asset bubble burst, involuntary migration, resource geopoliticization, and the collapse of multilateralism.  World Economic Forum

“Amid the horrors of 2020, we saw the world awaken to the power of new technology and radical ideas, from mRNA and BLM to satellite internet and sustainable fashion,” say the editors of Fast Company, who have assembled “21 reasons to hope in 2021.” The tech giants of Silicon Valley may finally be brought to heel. Flexible remote work and telemedicine are becoming mainstream, and “fast fashion” may actually be dead. Outdoor dining may pedestrianize our downtowns, and plant-based meat our food supply. Google’s “AlphaFold” AI looks poised to revolutionize medicine, like the mRNA vaccine technology that vastly accelerated the development cycle. Public acceptance of direct income support and alternative policing are growing. The costs of renewable energy and space launches are dropping. And the editors anticipate a rapid rebound in travel thanks to vaccines and “a glut of personal savings.”  Fast Company

Be a Force at Work!

George Brown College released a visually dynamic, 15-sec spot last week featuring an instrumental excerpt from Raphaël Lake’s “Turn it Up,” and a young woman apparently punching her way through a solid concrete wall. The spot emphasizes 84% employment within 6 months, and the campaign landing page urges prospective students to “be a force at work” thanks to “programs informed by industry” that will “help you hit the ground running when you enter the workforce.”  YouTube

I hope YOU “hit the ground running” this Monday morning, and that the first week of February goes smoothly for you!