Sudbury Steamrolled, or Getting Steamed?

Good morning, and happy “World Creativity and Innovation Day,” “Bulldogs are Beautiful Day,” “Chocolate Covered Cashews Day,” “Banana Day,” and – for those of you fortunate enough to have one in your life – “Administrative Professionals Day”!

Personally, I am not that fortunate, and I’ve had too many late nights this week, so I’m going to celebrate Wellness Wednesday by streamlining today’s issue…

Since yesterday, there has been at least one more development in Sudbury worth mentioning…

Since LU announced its intention to unilaterally terminate the federation on Apr 1, Thorneloe U has objected loudly and begun pursuing a court order to prevent it. Within a week, though, Huntington signed a deal to allow LU to “acquire” its Gerontology program, and agreed it would teach no courses for LU credit. And while uSudbury was publicly exploring ways to become an independent, unilingual francophone institution back in March, before LU’s announcement, that didn’t seem to be gaining much momentum. (Although MP Paul Lefebvre suggested an independent uS might be one way to protect francophone PSE in Sudbury, while Jagmeet Singh and Alexandre Boulerice have been calling on the federal government to support it.) When the province announced its intention to grant autonomy to Hearst U and NOSM last week, there was no mention of uS.

Indigenous groups have been vocal in their concerns about the disappearance of uSudbury’s English Indigenous Studies program for months. Tasha Beeds, assistant prof at uS, sharply criticized LU’s recolonization of Indigenous Studies: “Laurentian will take the entire Indigenous Studies departments, program, classes, history… all of the Indigenous minds, intellectual legacies, heart and thought, and they will take that and profit from it.” Sadly, though, last week it appeared uS might be conceding defeat along with Huntington: uS announced it was cancelling all Spring term courses, and one philosophy prof told the Globe & Mail that “our union suggests [uSudbury] will wind down.” Friday, uS signed an interim agreement to allow LU to teach 6 distance-learning Indigenous Studies courses “previously taught” by uSudbury, using “sessional instructors for the Spring term only.”

But yesterday we learned that uSudbury’s board of regents filed a notice of motion with the courts last Wednesday, arguing (much like Thorneloe) that the federation agreement is permanent and cannot be unilaterally terminated by LU. “Laurentian is not acting in good faith,” and the arbitrary termination would allow it to appropriate 100% of uS student tuition and grants, while burdening uS with ~$4M in costs to terminate its employees. Moreover, if uS were unable to maintain its payments on the land it leases “perpetually” from LU, LU could conceivably take possession of uS’s entire campus. The motion explains that “Laurentian owes its existence to USudbury,” founded 46 years earlier. The suit also explains that the one-month notice is inadequate for uS to manage the process of resuming its autonomy and independence.  CBC

The uSudbury board of regents unanimously voted to undertake the transition process to independence on Mar 11, has assembled an ad hoc committee and a community working group, and retained a consulting firm to develop a business plan to submit to MCU. The Assemblée de la francophonie de l’Ontario enthusiastically supports uS as a third francophone university in Ontario, after UOF and Hearst.  Sudbury Star

A group of Francophone and Francophile LU faculty are promoting a petition to the Ontario government to establish uSudbury as “a university by and for the Francophone community” of “Middle-North” Ontario. They demand a moratorium on French-language programs at Laurentian and the other federated universities, and urge the repatriation of all French programs and courses from LU to uSudbury, and “all material, physical, human and financial resources (including but not limited to archives, scholarships, donations, and copyright).”  Sudbury.com

“Apology” to the Community

You have probably noticed that I can’t resist a powerful metaphor… I’m drawing my title today from a letter to the editor by a “proud alumna,” who describes Laurentian U as “the very fabric of Northern Ontario… part of our poetry.” With the tragic cancellation of the midwifery program, she also describes LU as an Olympic pool in which “the students now have anvils attached to them.” Sudbury is now “a mining capital with no French mining program,” where an Italian Studies student “might never meet a Romano” (ie Ross Romano, Ontario’s minister of colleges and universities). The letter ends with an apology for running over LU “with a steamroller, frankly.”  Sudbury.com 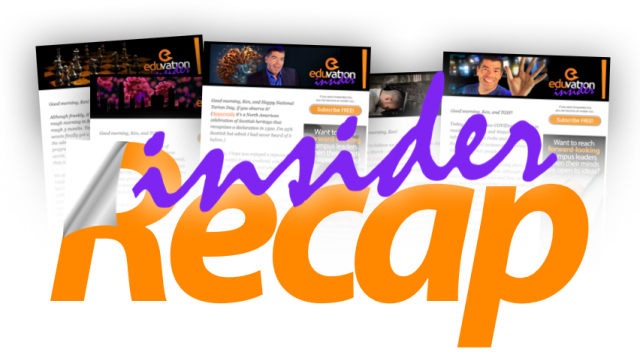 I’ve started assembling collections of Insider coverage on topics I think might be worth referencing, from issues over the past 13 months. If you want to retrace the evolution of the Laurentian University insolvency saga, for example, just click here:

As you know, I’m keeping a running collection of CdnPSE announcements about plans for Fall 2021 academic delivery, here:

Yes, that old classic, “COVID101” is part of this series, with some fundamental concepts described visually:

It’s very much a work in progress, but I am collecting the “upside” articles about some of the positive transformations this year that higher ed should strive to keep post-pandemic, such as compassionate academic policies or WFH flexibility:

I put together several solid issues on recent developments in microcredentials, and I know I’ll be sending people to them when they ask me for more details:

The single biggest financial impact of the pandemic, for many smaller Canadian institutions, has been reduced international student mobility because of border restrictions, quarantine requirements, and visa processing delays:

While there’s a great deal more to say on this topic, I have also published some items over the past while on how campus leaders can manage uncertainty and ambiguity, and help their teams deal with the resulting stress:

You’ll have to tell me a) whether this is worth spending a lot of my time on, and b) what other themes you think I should pull from back issues and assemble as “Insider Recaps.” Please do drop me a note!

I see hundreds of PSE program commercials every week, but this vid, released Monday, made me smile…

Perhaps it’s the funky music in this :25-sec spot, or the blend of stock video, lively animation and humour, but Red River College has done a nice job allowing the medium to be the message. “Fuse artistry and story-telling with cutting-edge production techniques. Master digital design fundamentals to create content for web and social media.” It’s worth half a minute of your time!  YouTube

As always, thanks for reading!