Don’t get me wrong – I’ve never been a fan of Apr 1 pranks, like Saran Wrap across toilets or Vaseline on doorknobs. Nor do I think it’s particularly funny when people mislead their relatives with false announcements of pregnancy, deaths or whatever else. (Even actual baby showers, gender reveal parties, etc. are clearly getting out of hand.)

But over the past decade watching higher ed activity on social media, I confess I’ve enjoyed the flurry of creativity that gets unleashed around Apr 1, particularly when it is genuinely creative and funny. It’s rather nice to see academic institutions relax a little bit and enjoy some fun, usually at their own expense.

So – while I do believe the corporate April Fools frenzy was getting overly commercial and way too heavy in 2019, it was nonetheless just a touch tragic when we all recognized independently last April that there was just nothing worth joking about in the midst of a global pandemic. We were shocked, anxious, depressed, isolated, and simply not in the mood.

With the kind of week I’ve been reporting, the pandemic is clearly heading into even more serious territory than it was last April, and despite the promise of vaccines, it’s still too soon to jest. Maybe, after 2 years shying away from it, April Fools will never quite come back again. Or perhaps, in 2022 or 2023, we’ll all get our sense of fun, humour, and confidence back again.

If I had to guess (and at this point I do), I would say that CdnPSE will likely be VERY subdued today, if they even acknowledge April Fools Day at all.

[I’m cataloguing the examples I come across at this blog post: Higher Ed Hijinks, April 1 2021 edition.]

But since this is my final issue of the week, before taking a 4-day long weekend, I want to wind up on a fun note – so instead I’ll invite you to join me on a “Throwback Thursday” nostalgia tour of April Fools back in the good old days, of 2016, 2017, and 2018…

Since yesterday, there have been 16 more cases of COVID19 reported by Ontario universities. (See my master spreadsheet for a running tally of ~1900 cases in CdnPSE since Sept 2020.)

Ryerson U confirmed 7 positive cases on campus in March, and 3 cases remain under investigation. An external contractor reported at least 3 cases among their workers.  The Ryersonian

uWaterloo reported 6 more confirmed COVID19 cases among “people who live on or have visited our campus.” All are associated with the outbreak in residence, bringing the total to 27 cases.  UW

Western U continues to grapple with COVID19 outbreaks in Elgin Hall, Ontario Hall, and Saugeen-Maitland Hall, but the outbreak in Essex Hall was declared resolved on Tuesday. Community outbreaks continue to spread due to a gathering of business students, and off-campus parties at fraternity and sorority houses. Global News reports that the staff outbreak, reported yesterday, involves staff from Western’s Facilities Management division. As students prepare for exams, they are saddened and frustrated by the academic and social challenges: “All the years before this, during exams season they leave the libraries open 24 hours a day… but not there’s just really nothing like it at all.”  Global

But before a long weekend, I should tidy up some loose news ends…

As I detailed on Monday, Tuesday and Wednesday, new infections are skyrocketing across BC, Alberta, Saskatchewan, Ontario and Quebec thanks to VOCs.

Alberta premier Jason Kenney, on the other hand, asserts that surging variants are “a wake-up call” but apparently not for him: his government will not impose curfews, stay-at-home orders, or widespread business closures. “The broader cost to peoples’ lives, to their livelihoods, to our social and economic health, would be massive if we were to pursue true lockdown policies.”  Globe & Mail

Saskatchewan Teachers’ Federation is calling on the province to close down in-class learning and move K-12 online for 2 weeks after the upcoming spring break, until Apr 23. “It’s a little too late to be proactive… [this variant] puts staff and students and their families at risk. That’s just not acceptable.”  CBC

Quebec premier François Legault has moved 4 regions back to red zones, and imposed a 10-day lockdown on 3 cities (Quebec City, Lévis, and Gatineau) starting tonight. At the same time, Quebec’s education minister Jean-François Roberge is ordering anglophone schools to bring secondary grades 3-5 back to the classroom, over objections from students, parents and teachers.

“It’s like we have to put populations in intensive care right now – otherwise we’re going to lose them.” – François Legault, premier of Quebec 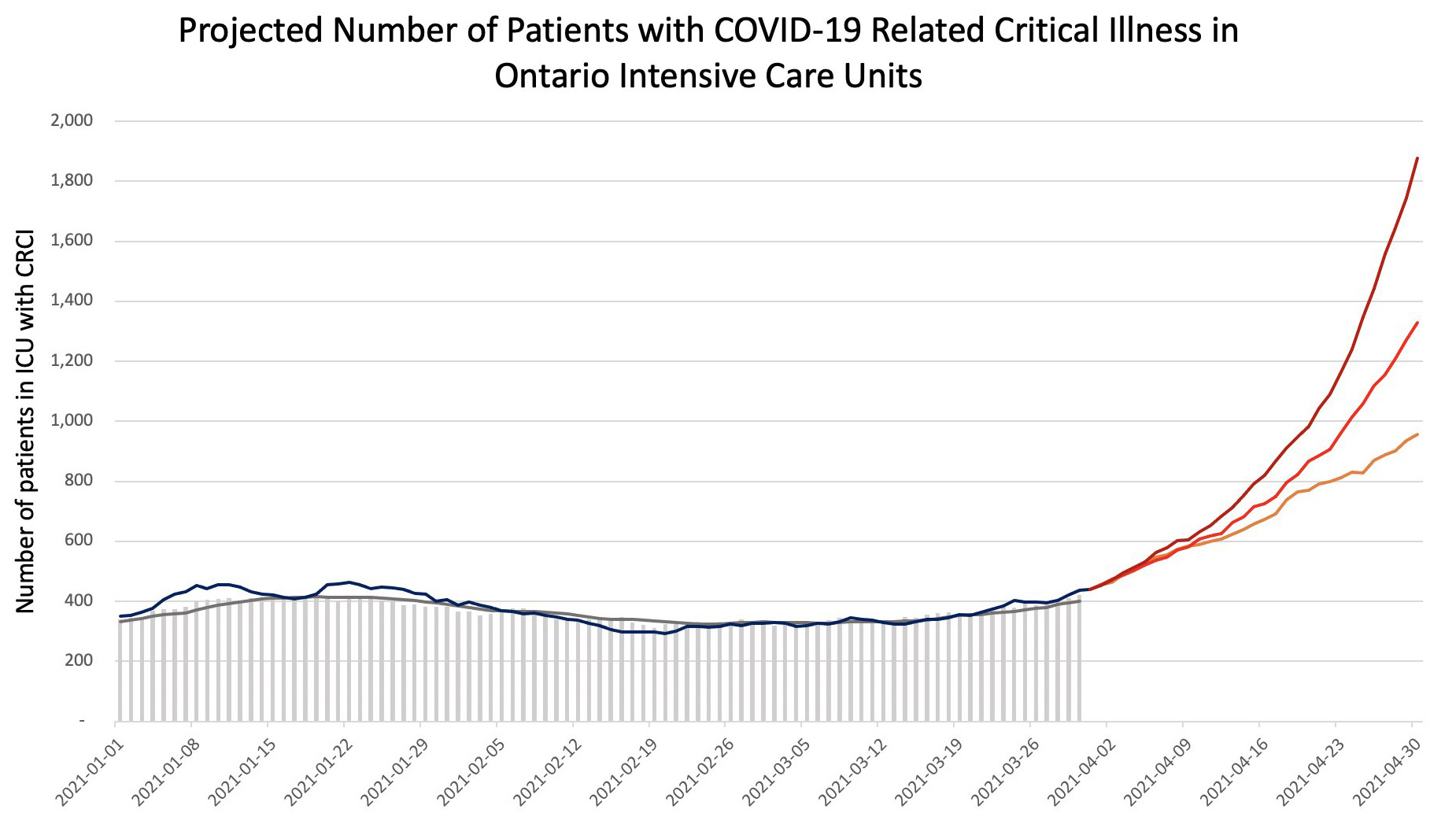 Ontario premier Doug Ford, looking back at 7 straight days of >2,000 new cases in the province and 421 COVID19 patients in ICUs, assured the public he “won’t hesitate” on Tuesday. On Wednesday, he teased that an announcement would be forthcoming on Thursday. (NDP Leader Andrea Horvath objected, “I don’t know why we’re waiting for the cabinet to have a conversation about politics versus public health.”) At press time, “sources” were telling CTV that Ontario will announce a month-long shutdown today, a move past “grey” to “white” zones, likely to begin on Apr 3 (the day before Easter).

Because sure, if you want people to start taking public health precautions seriously, you delay 2 days so you can announce them on April Fool’s Day, right??

Some recent news stories would make you suspicious if they were released on April 1, but they weren’t – I’ve just been saving them!

A study out of Mount Sinai Health System (NY) finds that subtle changes in your heart rate variability can be detected by an Apple Watch, signalling the onset of COVID19 up to 7 days before symptoms arise. (HRV normalizes again 7-14 days later, though.)  Mount Sinai

The Toronto Sun reported Tuesday (so maybe we’re safe, or maybe not) “more hard news from the COVID19 front”: a new study from U Rome has found that men triple their risk of developing erectile dysfunction after contracting COVID19. (This might be too good to be true, but it would certainly get the attention of many young frat boys – and perhaps even some old ones!)  Toronto Sun

An employee at a San José CA hospital wore an inflatable Christmas tree costume to cheer up staff and patients on Christmas Day. Clearly the attached fan stirred up too much air: within days, 44 staff tested positive.  New York Times

U Québec à Montréal is suing visual arts student Helene Boudreau for $125,000 in reputational damages over a series of “explicit” photos of herself including UQAM’s logo. One features a UQAM diploma, another a UQAM 50th banner. Boudreau claims she earns $20,000+ a month from her OnlyFans channel.  CTV

Because that’ll fix everything, right? AstraZeneca announced yesterday that its COVID19 vaccine, developed with Oxford, has been renamed “Vaxzevria.” The new name was approved by the European Medicines Agency back on Mar 25, so it’s no joke… but it sure doesn’t roll off the tongue!  Entrepreneur

Most rebrandings announced in the final week of March are just hoaxes, of course…

I confess, I’ve been watching the quickly-evolving electric vehicle segment with a lot of interest. (The reallycool ones are way outside my snack bracket, and I’m not convinced the battery packs will hold as much as advertised in a Canadian winter – but that’s a topic for another day.) Certainly I have noticed VW’s new electric ID4, and VW’s announcement that it would stop developing gasoline engines by 2026. So it didn’t actually strike me as strange or funny, really, when VW announced Tuesday it would be rebranding as “Voltswagen.” (I actually think it would be an improvement.) Like most half-hearted April Fools gags, it started with a pretty simple tweet, a mocked-up logo, and a media release. The real problem began when internal sources lied to reporters to maintain the hoax a bit longer (it wasn’t Apr 1 yet, after all) and reporters were eventually outraged at being “duped.” After its 2015 fraudulent emissions scandal, the $30B “Dieselgate,” VW has some pretty big issues with corporate credibility. My guess is they’ll steer clear of April Foolery for a while. MarketingDive

For the second year in a row, Google has declared that it will not create the usual elaborate April Fools pranks. “In 2020, we made the decision to pause our longstanding Google tradition of celebrating April Fools’ Day, out of respect for all those fighting COVID19. With much of the world still grappling with serious challenges, we will again pause the jokes for April Fools’ Day in 2021.”  The Verge

US cellular carrier T-Mobile is “transforming April Fools’ Day into a day of giving” with its social and crowdfunding campaign, #GiveThanksNotPranks. Every hashtag mention will trigger a $5 donation to DonorsChoose, towards school supplies for students in need (up to $500,000).  www.GiveThanksNotPranks.com

Humour has always been risky territory for higher ed marketers, but April Fools has been one day on which academic seriousness has been relaxed (just a little bit). So, should marketers consider foolishness in the midst of a pandemic? The general consensus is: be cautious, but consider parody and humour’s potential to act as a coping mechanism for stress after an incredibly long and challenging year. In the US, considering that 27% of the population has now been vaccinated, “the landscape has changed dramatically since this time last year.” Many Madison Ave agencies are developing April Fools campaigns for their clients this year, so we’re likely to see some of it spill over into international markets too. Obviously, brands that engage in Apr 1 hijinks should avoid anything that smacks of misinformation or deceit, keep it tasteful, and ensure they leave people with a smile, not heightened anxiety!  AdAge

So, in the spirit of helping you smile, and reminding you of the good old days when we could shoot fun videos on campus without facemasks, I bring you…

It’s never easy to share examples the same morning they are released into the wild, and timing is everything with April Fools Day. So, it’s a wonderful coincidence that it’s also Thursday, the day of the week that we all love “throwbacks.” So, just #ICYMI, here are a couple of fun anthology episodes of my webcast, Ten with Ken, including clips from hundreds of higher ed April Fools pranks…

My first Ten with Ken on the subject was organized around the tropes and themes most common in PSE April Fools videos. (Can you tell I was an English major for 10 years?) This fast-paced, bizarre 25-min documentary looks at name changes, mascots, improbable infrastructure, celebrity students, cats, absurd new programs, campus security, and more. I also wind up with 5 tips for your own Apr 1 pranks.  10K-2016

The following year I tried to be more succinct – but it still took 25 min to share only the barest highlights from thousands of higher ed prank news releases and videos. Themes included absurd animal announcements, more extravagant campus facilities, riffs on Harry Potter and IKEA, and 4 world-class examples I rated “best in show.”  10K-2017

Inventorying and editing hundreds of clips to produce those 2 anthology double episodes – a full HOUR of April Fools examples! – was exhausting, and increasingly March has become a busy time for my day job. So for Apr 1 2018, I instead spent the day cataloguing higher ed hijinks in real time on my blog.  Higher Ed Hijinks 2018

[I’m cataloguing the examples I come across at this blog post: Higher Ed Hijinks, April 1 2021 edition.]

Hopefully some of that was fun for you too, and you found a little time to watch those classic 10K episodes.  I’m taking a 4-day break for the long weekend, and will be back in your inbox on Tuesday.

I hope you have a lovely spring weekend, a happy Easter, and above all that you stay safe in this time of escalating infections!