March Madness Draws to a Close

Good morning! It’s hump-day in a short week, and many institutions will be recognizing Transgender Day of Visibility today.

But for the third day in a row, my desire to get away from pandemic news has been frustrated. My subject line this morning is probably unduly optimistic.

When I say “March Madness,” of course, I don’t mean NCAA basketball, but instead the all-star playoffs between vaccines and variants, with much dribbling around the court by political jocks who really ought to be letting the geeks call the shots.

And when I say it’s “drawing to a close,” sadly I don’t mean that things are improving on the pandemic front – merely that today is month-end. No matter how rough January was, and how alarming March has been, I fear T.S. Eliot will be proven right this year, and April will be “the cruellest month.”

As you’ll see below, it looks like stricter lockdowns are coming to many regions of Canada very soon, and they’re already affecting thousands of students amidst major outbreaks at Brock, Waterloo, and Western. You may have noticed my past 3 round-ups of “COVID on Campus” have averaged 50 new cases each time – and in all, March set a new record, more than double the average since September…

The crazy pace of change this week for COVID19 infection curves, vaccine authorizations and PHO restrictions underscores the exponential acceleration of the pandemic right now…

Quebec premier François Legault is ignoring advice and criticism from health experts (and the cautionary tale of neighbouring Ontario), and instead insists he can ease restrictions despite surging variant strains of COVID19. He is apparently waiting for hospitalization rates to strain the system’s capacity before moving back to restrictions – which is misguided, as I explained way back in COVID101, because of the month-long mortality lag. “Our situation is now better. Our measures are tougher, including the curfew at 9:30. All the restaurants, for 60% of Quebec, in red zones, are closed.” But opening up theatres and houses of worship for 250 people is just asking for trouble. CBC

“The virus doesn’t really care if you’re there for prayer or for theatre — what it really sees is a crowd of people, and 250 people indoors is just asking the virus to spread faster.” – Prativa Baral, epidemiologist, Johns Hopkins Bloomberg School of Public Health

Likewise, Saskatchewan premier Scott Moe says “the way through this is vaccines. The way through this is not to increase public-health measures.” Schools in hard-hit regions have pivoted to remote learning, but the government is allowing bars and restaurants to stay open. NDP health critic Vicki Mowat responded, “You only need to look down the road to Regina to see the cost of inaction. Regina hospital admissions and ICU beds are overwhelmed.”  Globe & Mail

As Ontario continues to report well over 2,000 new cases of COVID19 daily, the more aggressive VOCs are sending twice as many patients to the ICUs, which will soon be at capacity. Although the education minister insists that March Break (now April Break) will not be further postponed, premier Doug Ford warned Ontarians yesterday, “don’t make plans for Easter… I won’t hesitate to lock things down.” (Of course, he is hesitating in the very act of saying that…)  Globe & Mail

“I am very concerned about the breakdown in social cohesion and the understanding of the risk and the sacrifice that is still needed to get us all through this safely together and without unnecessary death and harm and further massive disruption to hospital care.” – Anthony Dale, president, Ontario Hospital Association

As Ontario K-12 schools prepare to close for the Easter weekend and the postponed March Break starting Apr 12, the country’s biggest school board is warning staff they may need to pivot to online learning again. The Toronto District School Board wrote all principals and vice-principals on Monday to ask schools to prepare to make the switch.  680 News

Then again, >300 health professionals are calling on Ontario’s government to keep schools open for the rest of the school year, “regardless of community rates of SARS-CoV-2.” They argue that children are often asymptomatic, and face little risk of hospitalization or death, but that “school closures negatively impact the physical and mental health of children as well as their social development.” Calls to the Kids Help Phone doubled between 2019 and 2020, and hospitals are reporting unprecedented levels of youth suicide attempts and eating disorders.  Toronto Sun

A bit of Good News

Good news stories are frankly few and far between this week, particularly regarding the pandemic, but PM Justin Trudeau announced yesterday that Pfizer and BioNTech will send Canada an additional 5M vaccine doses in June. All in all, Canada expects >44M doses by Canada Day (Jul 1) – more than enough to offer one dose to all 31M adults in the country.  Globe & Mail

Over the past 7 months, I have tracked 1,760 cases on Canadian college and university campuses (and 276 cases at university hospitals). From September through February, we saw an average of 202 cases a month – but March almost TRIPLED that, to 546 cases! The pandemic is picking up speed in CdnPSE, driven by VOCs and pandemic fatigue, and unsafe student socializing for everything from St Patrick’s Day to Spring Break. (I’m getting really tired of being the party-pooper…)

Since yesterday, there have been 49 more cases of COVID19 reported by CdnPSEs – and all but 1 were in Ontario, of course.

Brock U reports that almost 70 students living in campus residences are isolating due to the outbreak (still at 31 cases).  Brock News

Outbreak at ALL uWaterloo Residences

uWaterloo reports that, in addition to the 11 student cases reported previously, there are now 21 cases in students living on campus or visiting campus, including VOCs. The PHO has declared an outbreak at allcampus residences. (There are 2,000 students living on campus.) Campus dining will be shifting to take-out only, and UW is urging students to remain in their rooms except for classes, exercise or to get food.  UW

Western U is now grappling with two more outbreaks of COVID19, for a total of 4 in the past week alone. 7 students tested positive in the Elgin Hall student residence, reported yesterday. And an unknown number of staff involved in another outbreak in “one particular unit” have also tested positive. (This is in addition to the 22 cases in Saugeen-Maitland and Ontario Halls, reported yesterday, and the ongoing outbreak in Essex Hall. And the off-campus outbreak of ~50 cases due to student gatherings in sorority and fraternity houses earlier in March.) Another group of 10 students who attended “a social function associated with the business school” have also reportedly tested positive.  London moved from orange to red zone this week, and the CBC reports that 20% of all COVID19 cases in London are on Western’s campus. Western is now requiring 3-layer masks on campus, and employees working within 6 feet of each other must also wear face shields. All common areas in residence have now been closed.  Western News  |  London Free Press  |  CBC  |  CTV

If you found that exhausting to read, rest assured I found it even more demoralizing to research and write!  I’m going to try to catch some extra sleep tonight, and come up with something more enlightening for tomorrow’s issue. (If not, I may have to take an even longer Easter break than I planned.)

Many CdnPSEs have released videos to acknowledge the hard work of their faculty and staff, the resilience of their students, and the ways they reached out to support the broader community. But frankly, few have lobbied me so persistently, so… 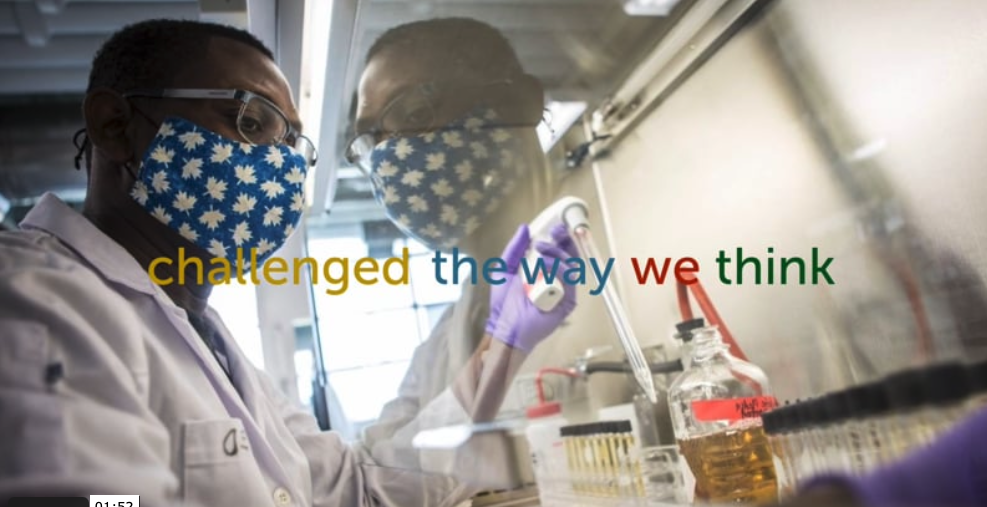 Challenging the Way We Think

Trent U released a 2-min slideshow video last week to reflect on the past pandemic year, and look forward to “a more auspicious future.” It has some upbeat music, touching photos, and lovely typography, but in particular I like the way it puts a new spin on Trent’s recruitment slogan, “Challenge the Way You Think.” No doubt your institution has put out a similar warm and fuzzy video too – but after 3 days of bad news, I needed a little pick-me-up.  Trent

Speaking of pick-me-ups, tomorrow is April Fool’s Day.  It looks like at least one automaker is getting into the action early – will higher ed institutions participate too, or will everyone sit the year out like they did last year?

Please drop me a line if you spot some April Foolery, at your institution or anywhere in higher ed!