Doubling Down on Debt, Vaccine Dilemmas

Good morning, and happy Volunteer Recognition Day – although it’s also 4/20, for those of you who feel the need to acknowledge “Weed Day.”

As for me, I’m just really looking forward to speaking with the Ontario College Administrative Staff Association’s Leadership Conference today, about “Post-Pandemic Pivots.” It can be challenging to step back from a relentless crisis and ongoing uncertainty to see the opportunities to regroup, refocus and rethink our strategies – but we’ll do our best in one hour!

This morning, though, I want to revisit a few developments at Laurentian, and dozens more announcements and discussion about vaccination policies for the Fall.

But first, those of you who postponed buying that new yacht are probably kicking yourself…

Yesterday the minority Liberal government unveiled their first official budget in 2 years, a 724-page monster that I confess I will never read. (I’m merely distilling media coverage here.) Apparently, it included new taxes on e-cigarettes, digital services, luxury cars over $100,000, and yachts over $250,000, and of course >$100 billion in goodies for voters (as the next election approaches), more than doubling the federal debt to a projected $1.4 trillion by 2026… 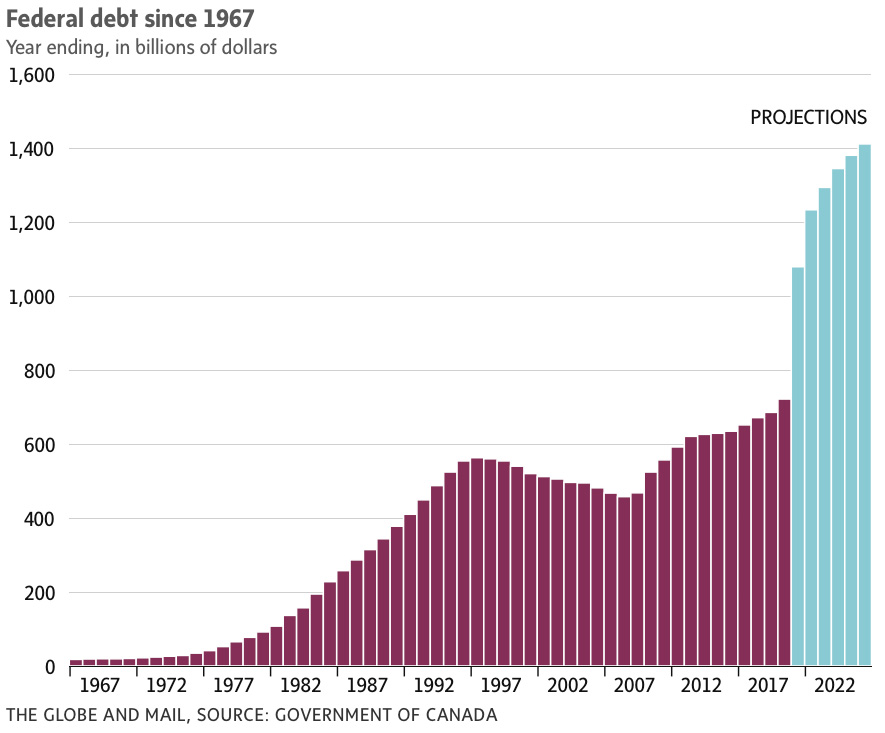 Budget 2021 doesn’t so much invest in infrastructure as in “social infrastructure,” like childcare subsidies, worker and employer supports, and student loans. It projects another $12B for CERB and $26B for CEWS in the upcoming fiscal year, although it plans to phase both out by Sept 25 (when vaccinations are apparently expected to be completed and the economy reopened). A new CRHP (Recovery Hiring Program) will provide subsidies to employers for payroll growth in Jun-Nov, and the budget directs $2.4B over 3 years to upskilling and trades training. The budget includes new funding for long-term care homes, Indigenous communities, and mental health services, and most notably, up to $30B over the next 5 years to half-pay for a national daycare subsidy, which would bring childcare costs down to an average of $10/day by 2026. (The hope is that this will boost the labour participation rate among Canadian women as it did in Quebec, but it will require the provinces to match funds.) The budget also bumps Old Age Security payments by 10%, and raises the minimum wage in federally-regulated private-sector jobs to $15/hr.  Globe & Mail

Compared to the big-ticket items like CEWS or Childcare, it’s a drop in the bucket to promise $5.7B over 5 years to double federal student grants, and waive interest on Canada Student Loans until Mar 31 2023.  Globe & Mail

“One of the most striking aspects of the pandemic has been the historic sacrifice young Canadians have made to protect their parents and grandparents. Our youth have paid a high price to keep the rest of us safe.” – Chrystia Freeland, Canadian Finance Minister

The budget also promises $8.75B over the next 5 years to develop green tech (particularly to decarbonize large emitters), and $916M for life sciences and bio-manufacturing (to “provide Canada with a more secure pipeline for vaccines in the future”). It extends and expands previous programs, including superclusters, $443M for R&D in AI (over 10 years), and $360M for a National Quantum Strategy.  Globe & Mail

Also “buried” in the budget is $15M over the next 3 years for archaeological exploration of the shipwrecks of the HMS Erebus and HMS Terror, deep beneath the waves in Nunavut. (I know at least one fan of The Terrorwho will be watching closely!) There’s also $32.1M for bookstores, $101M to support wineries, $80M for CanCode to teach K-12 students “coding, data analytics and digital content development,” and scholarships to commemorate the victims of Ukrainian Airlines Flight 752.  Maclean’s

Since yesterday, there have been 5 more cases of COVID19 reported by CdnPSEs. (See my master spreadsheet for a running tally of ~2,500 cases in CdnPSE since Sept 2020.)

McMaster U reported a confirmed case on campus yesterday: an international student who had already been quarantining in residence.  McMaster

Western U reports that 80% of the 3,100 students who were in residence Apr 1 have now moved out. (Western’s residences opened at 70% capacity in September.)  London Free Press

A week ago I reported on 14 American colleges that were making COVID19 vaccinations mandatory for students returning to campus this Fall, including Rutgers (NJ), Notre Dame (IN), Cornell U (NY), Brown U(RI), Duke U (NC), and others. (I also outlined some of the legal considerations being discussed in the US.)

Since then, 32 more US colleges have jumped on the bandwagon, including Johns Hopkins U (MD), NYU(NY), and Vassar College (NY). (The Chronicle is maintaining a list of US colleges announcing mandatory vaccinations, and it’s now up to 46 in all.)

Columbia U (NY) will integrate a COVID19 vaccine mandate into the Columbia Community Health Compact, an agreement all students are required to sign in order to access campus facilities.

Dartmouth College (NH) will require all students to be vaccinated before returning to campus, or shortly thereafter. (If Dartmouth “does not achieve herd immunity levels,” social distancing and hybrid/remote learning will be required.)

Johnson County Community College (KS) is paying employees $250 to get vaccinated, in “an innovative way to reinforce healthy decisions.”

Yale U (CT) will require all undergrad, grad and professional school students to be fully vaccinated before they can attend on-campus classes. (A decision about whether or not to require staff to get vaccinated will be made in June.)

“Any school that fails to make this a requirement is compromising the safety of its students, its faculty and staff, and the members of its surrounding community. This is going to be the norm.” – David Paltiel, prof of health policy, Yale U

69% of Students are OK with it

A survey of 15,600 applicants to US universities early in March found (not surprisingly) that “just about everyone wants face-to-face learning” (59% of prospective first-year students, and 72% of their parents/guardians). Overall, 85% were willing to comply with mandatory vaccination rules, 95% with mask mandates, and 92% with social distancing requirements. 69% of applicants were “comfortable” or “very comfortable” with getting a COVID19 vaccination – and that comfort increased significantly with family income.  Maguire Assoc

Is a Mandate Ethical?

A new WHO policy brief identifies 6 ethical considerations to guide decisions about making COVID19 vaccinations mandatory: 1) Is it necessary for and proportionate to the achievement of an important public health goal? 2) Is there sufficient evidence of vaccine safety for the populations in question? 3) Is the vaccine efficacious and effective? 4) Is there sufficient reliable supply of the vaccine, with free access? 5) What impact will mandating the vaccine have on public trust? 6) Has the decision-making process been transparent and deliberative? Western health studies prof Maxwell Smith, who led the preparation of the brief, observes that “mandatory vaccination is unlikely to be ethically justified among the general public given limited supply and because it is unclear that a mandate is necessary to achieve public health objectives.” In vulnerable settings like long-term care homes or hospitals, however, it might be ethically justified.  Western News

In the US, state legislatures may impose a vaccine mandate, or a ban on vaccine mandates, that explicitly includes or excludes college campuses – and regardless of CDC guidelines. There may be legal risk for an institution that imposes a mandate, or fails to do so. There are religious minorities and outspoken Republicans who will resist and protest a vaccine requirement. But many campus leaders agree that if the vaccine is not mandatory, particularly for students living in residence, a return to “normal” cannot happen this fall. For now, most are emphasizing persuasion and information campaigns to encourage faculty, staff, and students to get immunized. (ACHA is developing a “vaccine confidence toolkit” and a national social media campaign. The City University of New York has launched a #VaxUpCUNY campaign.) Effective policies may not mandate the vaccine, but could “spell out what will and won’t be available to those who are not vaccinated.”  Chronicle of Higher Ed

Since my last summary on Friday, a few key things have happened in Sudbury…

Lakehead U is objecting to the province’s move to grant the Northern Ontario School of Medicine institutional autonomy. “We are concerned by today’s news, particularly in light of the absence of any consultation with the university.”  Sudbury Star

uSudbury signed an interim agreement, announced Friday, that will allow LU to teach 6 distance-learning Indigenous Studies courses “previously taught” by uSudbury, using “sessional instructors for the Spring term only.” This summer, LU will consult about “how best to ensure the ongoing delivery of Indigenous education.”  Laurentian

Thorneloe U filed its court challenge against LU’s unilateral termination of the federation agreement, in the Ontario Superior Court last Thursday. The court filing says that LU cutting off provincial funding will precipitate Thorneloe’s own insolvency, while making no material improvement to LU’s finances.  Sudbury Star

Lakehead economist Livio Di Matteo calculates that the LU cuts to staff and programs will mean at least a $100M impact on the Greater Sudbury economy, or 2% of the city’s GDP. (That’s just taking $30-$40M in direct wages, and a multiplier for indirect impact – but not counting the impact of out-of-town students, who may be dissuaded from attending LU.)  Sudbury.com

“Universities are much more complicated than pulp mills in terms of their programs and what they do in communities.” – Livio Di Matteo, economist, Lakehead U

~100 Protestors picketed near the home of LU president Robert Haché on Friday, wearing masks and attempting to maintain social distance. The group included students, employees, alumni, and midwifery students, outraged at being told to switch to nursing. They were even joined by Thorneloe U president John Gibaut.  Sudbury.com

The Nipissing U Faculty Association is calling for the resignations of MCU Ross Romano, LU president Robert Haché, and his senior leadership team, citing “the loss of confidence in the minister’s commitment to the university sector” and “the catastrophic mishandling of the situation at LU.”  Sudbury Star

Jean-Marc Dalpé renounced his honorary doctorate from Laurentian. The francophone author, poet and playwright has written to president Haché to demand an investigation into the real causes of LU’s financial chaos. “The resistance is only just beginning.”  CBC

Chancellor Steve Paikin, host of TVO’s The Agenda, has resigned. He has served as Chancellor at Laurentian since 2013, and his second term was to continue until July.  Sudbury.com

While Quebec politicians publicly protest the injustice to minority francophone education rights in Sudbury, they are simultaneously undermining minority anglophone PSE in their own province…

The Parti Québécois voted 94% Sunday in favour of adopting their youth wing’s proposal to impose Bill 101 on the province’s CEGEPs. If the CAQ government were to apply the measure, the language bill would prevent francophones and allophones from attending English CEGEPs.  Montreal Gazette

Since we’re talking about the impact of the Laurentian restructuring…

13-year-old Ada King Gold had hoped to study music and education at Laurentian, but last week’s cuts eliminated the option of music in Sudbury. With her mother, an LU alum, Ada co-wrote and recorded a song expressing their frustration at “corrupted” management and “disrupted” lives, but sounding a defiant note: “We won’t stay silent, we will not back down… There is still time to turn this around.” The song calls on government to “help fix the deficits,” and on accountability for “those responsible,” because “Who’s gonna come now, Who’s gonna stay now, With this crisis in our town?”  YouTube  |  Sudbury.com