While You Were Out…

I hope you enjoyed a peaceful holiday break, and found ways to gather safely with friends and family. (We made extended use of Zoom in my family.) I have to admit, I rather enjoyed the 3-week vacation from chronicling the daily developments of the pandemic – but I hope you didn’t enjoy my absence from your inbox TOO much!

Of course, now I pay the price for that respite. Since it’s Monday, I thought I would try to sum up all things COVID since my last update on Dec 14. That proved easier said than done… so I’ll have to spread the summary out over several days.

Some key things today: Canada’s cases rose an alarming 43% (and that doesn’t even count the impact of holiday gatherings and travel); hospitals around the world are running out of oxygen and using refrigerated truck trailers as portable morgues; CdnPSE reported 25 more cases on campus; and we’ve now got 5 variant strains of the coronavirus from the UK, South Africa, Nigeria and Brazil to worry about. (And perhaps a hypothetical US variant too.) I’ll sum up what we know about the variants so far below – and, #ICYMI, a new brand expression from uWaterloo!

In many ways the pandemic continued its inevitable, inexorable, and entirely predictable course. (Remember the key lessons from the 5 graphs in my COVID101 series.) And yet somehow the world also managed to deliver the unpredictable and absurd…

The sudden appearance of gleaming metal monoliths continued to mark the end of 2020 around the world, from the Utah desert to Romania, from Pinawa Manitoba and the Humber Bay shoreline in Toronto to several around Vancouver BC. (In keeping with the season, one monolith in San Francisco was even made of gingerbread.) And as you might expect of outreach efforts from advanced intelligences, monoliths also appeared on campus at Indiana U of Pennsylvania, Austin Community College (TX), uBridgeport (CT), and uHawaii Mānoa. (Although the latter clearly involved time travel, since it was erected in 1973!)

Also – purely by coincidence I’m sure – there was news of mysterious signals from Proxima Centauri, suggesting intelligent life just 4.3 light years away. (“It’s never aliens – until it is,” observed Scientific American helpfully.)

And on Dec 21, a “great conjunction” of Jupiter and Saturn delivered us a “Christmas star” the like of which we haven’t seen in 800 years. There’s nothing like gazing out towards the stars to instill a sense of cosmic peace, and give us a broader perspective on our petty politics and even global crises of the moment. This too shall pass.

Since my last Monday round-up on Dec 14, the COVID19 pandemic has been continuously setting and breaking new records for cases, hospitalizations, ICU beds and deaths. (It’s not been pretty.) Optimism at the prospect of imminent vaccines has given too many people a false sense of relief, with more infectious variants accelerating the seasonal surge, and the real impact of holiday gatherings still to come. 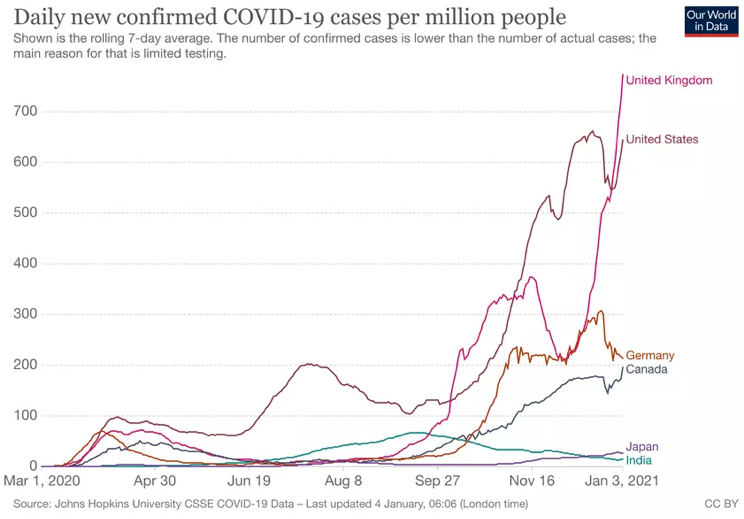 Globally, in less than a month we’ve gone from 72.2M cases to 89.7M (a 24% increase). Global deaths have climbed from 1.6M to 1.93M (a 21% increase). The UK has seen case counts skyrocket, with 30,000 deaths in the past 30 days. In London, 1 in every 30 people is infected and hospitals are at the breaking point. Surgeries are being cancelled, ambulances are waiting hours for available beds, and oxygen is in short supply with >20,000 COVID19 patients in hospital. Hospitals in Ukraine are overwhelmed, with one medical college converted into a makeshift hospital with hundreds of patients in lecture halls. At 2 hospitals in Egypt last week, every COVID19 patient in the ICUs reportedly died when oxygen supplies were depleted.

Hospitalizations have surged to >132,000, particularly across the South, where 13 states set new records this past week. 40 hospitals across Georgia can no longer accept new patients. In Los Angeles, medical facilities are running out of oxygen, and ambulance crews have been told to declare patients dead on the scene rather than bring them to hospital if they have little chance of survival. Even with sufficient oxygen, older hospitals are finding their oxygen pipes are freezing up from overuse. Refrigerated trucks are being dispatched across California as mobile morgues. Arizona now has 69 of every 100,000 residents hospitalized with COVID19 – the highest rate in the country – thanks to a “very lax policy environment.”

“We’re no longer in a wave or surge, or surge upon a surge. We really are in the middle of a viral tsunami.” – Robert Kim-Farley, Medical epidemiologist, UCLA 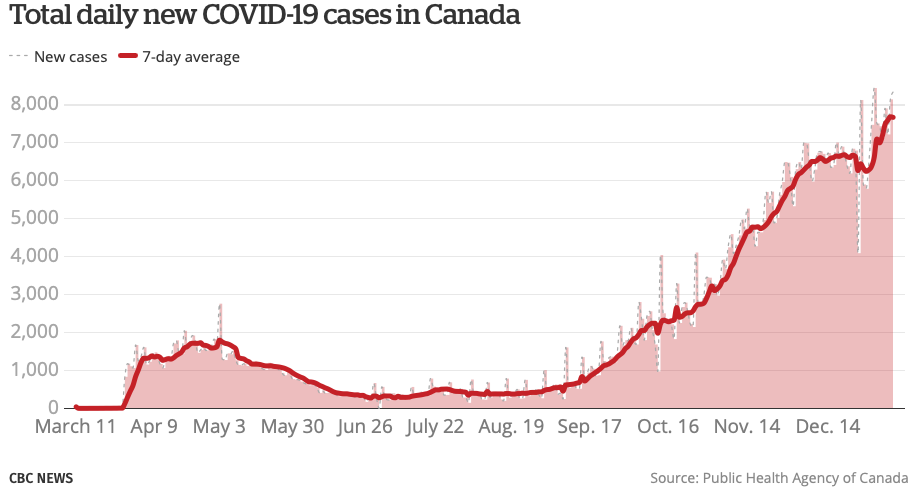 The Atlantic bubble burst back in November, although Newfoundland and Labrador reports no new cases for the past 4 days, and has just 4 active cases. PEI has just 8 active cases. With 171 active cases and 30 new cases on Saturday alone, all of New Brunswick is at “orange alert,” and has prohibited all nonessential travel in the province. Nova Scotia reported 3 new and 31 active cases this weekend. Students returning from anywhere other than PEI or NL are “encouraged” to book a COVID19 test halfway through their 14-day quarantine. 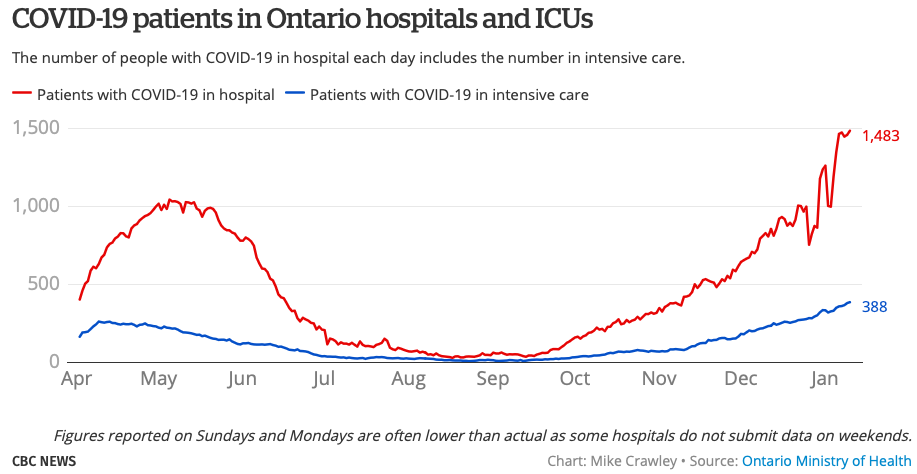 Ontario has been reporting >4,000 new cases daily, and new modelling to be released this week will make Ontarians “fall off their chairs.” Premier Doug Ford warns, “we are in a crisis. It is scary.” More than 1,400 COVID patients are in Ontario hospitals, 400 of them in ICUs. Ford warns that Ontarians will have to be vigilant until April or possibly June. Field hospitals are being pressed into service in Oakville and Burlington. Windsor Regional Hospital has opened a new temporary morgue, and Western U’s University Hospital is using a refrigerated truck trailer as an overflow morgue.

Worse may be yet to come in the pandemic. Back in August I reported that the COVID19 “G-Variant” had emerged in Europe in Feb 2020 and quickly become the dominant strain on the planet, because it was more readily transmissible than the original from Wuhan. We’ve discussed several times since the risk of zoonotic transmission to and from animals like minks, as an accelerant of genetic mutation. In fact, there are >3,500 genetically distinct branches of the COVID virus mapped at NextStrain.org (and that’s just a selection of all that exist).

In mid-December, a new variant of COVID19 was identified in the UK (SARS-CoV-2 B.1.1.7) with 23 genetic mutations, which is 56% more infectious than the original, and seems to be more contagious among children. This new variant seems to be a key driver in the rapid escalation of cases which have led to a third national lockdown. Although many countries banned travellers from the UK in response, the UK variant has now spread to the US, Canada, and many other countries. Disturbing new modelling out of Queen’s U projects that the new strain could become the dominant one in Ontario as soon as late February, and that it could double the cases every 10-15 days instead of every 40.

Last week, a uTexas study concluded that the Pfizer/BioNTech vaccine appears to remain effective against one mutation (N501Y) in the UK variant, but more work remains to be sure it will be effective against all 23 mutations involved. Nonetheless, the accelerated spread of the UK variant means even more pressure to speed vaccinations, and raises the threshold for effective herd immunity.

“Before the new variant I was more hopeful of a summer that would allow people to go to camp and travel and that sort of thing. I’m less sure about that now. That just makes this a much harder problem… It’s certainly not good news.” – Marc Lipsitch, Epidemiologist, Harvard

Scientists seem to be more concerned about the E484K mutation, in the new South African and Nigerianvariants (501Y.V2). And of course, experts fully expect more mutations and variants of COVID19 to come.

On Friday, news outlets reported a new, highly-contagious “US variant,” which is currently just a hypothesis proposed by Deborah Birx, of the White House coronavirus task force. “This fall/winter surge has been at nearly twice the rate of rise of cases as the spring and summer surges. This acceleration suggests there may be a USA variant that has evolved here, in addition to the UK variant that is already spreading in our communities and may be 50% more transmissible.”

And just last night, Japan’s health ministry reported yet another COVID19 variant with 12 mutations, in 4 travellers from Brazil. It reportedly differs from the UK and African variants, and tests are being conducted on the effectiveness of existing vaccines on it.

“It is highly likely there are many variants evolving simultaneously across the globe. However, it could take weeks or months to identify if there is a single variant of the virus that causes Covid19 fueling the surge in the US similar to the surge in the UK.” – Jason McDonald, CDC spokesperson

There are many reports of cases, hospitalizations and deaths on US college campuses, but here are a couple of notable ones:

uColorado Boulder chancellor Phil DiStefano has tested positive for COVID19 and is in isolation.  CU Boulder

St Bonaventure U (NY) president Dennis DePerro has been hospitalized with COVID19 after travelling home for winter break. SBU

The number of cases in CdnPSE slowed significantly during the holiday shutdown, but nonetheless there are 25 I have added to my master spreadsheet, which so far has tracked 1,071 since the fall term began:

Dalhousie U confirmed a student case of COVID19 in residence on Jan 5. The student sought testing “at the onset of symptoms” and is now in isolation. (Total 5 since Sept.) Dal

McMaster U reported 5 more cases on campus, Dec 20 and Jan 4-8. 4 of the cases involved staff members, while 1 was an international grad student in quarantine on campus. (Total 22 since Sept.) McMaster

Redeemer U had a total of 5 student cases last month. CBC

St Francis Xavier U students are returning to Antigonish NS to quarantine before classes recommence. Just before the break, I shared the happy news that StFX had made it through the fall term with zero cases of COVID19. Unfortunately, the same cannot be said for students’ hometowns, as 2 students have now returned to campus and tested positive. Toronto Star

uWindsor confirmed 8 more cases of COVID19 on campus in December, and 1 on Jan 1. (Total 19 since Sept.)  uWindsor

On the brighter side…

On a lighter note…

Ironically, it was only after months of neglect and very few published videos last year that the Ten with KenYouTube channel suddenly saw a burst of new subscriptions, and finally passed the 1,000 mark. (Perhaps it’s a sign of pandemic binge-watching?) They do say a watched pot never boils…

Thank you to those of you who subscribe and spend time with me that way… I will try to reward your patience with some new content soon!

uWaterloo has replaced its “Beyond” brand expression with a new slogan, “You+Waterloo,” to usher in upcoming brand awareness and annual giving campaigns. “The focus is on the connections and community that continue to advance Waterloo research and innovation at home and around the world. You+Waterloo calls on creators, explorers and boundary-pushing thinkers to join us in driving real-world solutions that meet today’s and tomorrow’s challenges… Our greatest impact happens together.” uWaterloo Daily Bulletin  |  Brand Guide  |  Youtube Vid

As always, thanks for reading!  Tomorrow we’ll take a look at pandemic lockdowns across Canada and around the world, and the impact it’s having on the return to campuses and classrooms. Perhaps your institution reopened last week, perhaps it’s reopening today, or perhaps it’s still unclear when you’ll be back. As always, I’ll try to provide some context and perspective.

Meanwhile, stay safe and be well!