On the weekend, most media outlets proclaimed Joe Biden and Kamala Harris the president- and VP-elect – so, although it’s not official until congress certifies the votes of the electoral college in a couple of months, and it seems likely the Trump administration will try every avenue to challenge the outcome, it seems reasonable now to consider what the implications of a Biden administration may be for higher education in the US, Canada and elsewhere.

But first – 252,000 COVID19 cases on US college campuses, mutant minks may derail the whole vaccine project, Ontario’s response is “scientifically illiterate,” and just as SaskPolytech gears up to send students back to campus after a cyberattack – a blizzard forces them to declare a snow day!

Global: The world has now surpassed 50M confirmed cases of COVID19 and 1.25M deaths – and the actual toll is likely much higher than that. 10 countries account for two-thirds of the cases, led by the US, India, and Brazil.

Mink Variant and the Vaccine

Denmark has committed to destroy 17 million farmed mink to prevent the spread of a mutated coronavirus, and now the virus has infected mink in 5 more countries (the Netherlands, Spain, Sweden, Italy, and the US). Even worse, the mink variant has infected hundreds of people – and is notsusceptible to COVID19 antibodies. The new strain could potentially render the vaccines currently in development useless, and launch a second COVID19 pandemic upon the planet.

US: Last week, Anthony Fauci’s June prediction of 100,000 COVID19 cases per day came to pass, and the case counts and hospitalizations continue to climb rapidly in a third wave. 350 of the 376 counties with the worst COVID19 outbreaks right now voted overwhelmingly for Trump in the election – probably not because of the outbreaks, but because Trump supporters echo his cavalier attitude to the virus.

Canada: The inevitable second wave of the COVID19 pandemic has continued to drive case counts to new record highs for Canada as a whole, led as usual by Ontario and Quebec – but BC is setting new records too, and per capital, Manitoba is actually the country’s epicenter right now. BC has imposed new restrictions in the Lower Mainland, and even Nova Scotia and Nunavut are concerned about new cases.

And yet, the Ontario government has implemented a new system of restrictions that epidemiologists call “gibberish” and “scientifically illiterate,” and they warn it will “light an inferno rather than snuff out the pandemic.” (The criteria they recommend are “dangerously high,” say critics.) Ontario hospitals are astonished at Premier Ford’s decision to reopen restaurants, pubs and gyms in Peel Region as COVID19 cases skyrocket there.

“Given the powerful evidence of spread of the COVID-19 virus in the region… the decision to proceed with reopening is reckless and must be reversed immediately given the risks it poses to area hospitals.” – Anthony Dale, CEO, Ontario Hospital Association

“Perhaps we were cursed by our early success.” – Brian Pallister, Premier of Manitoba 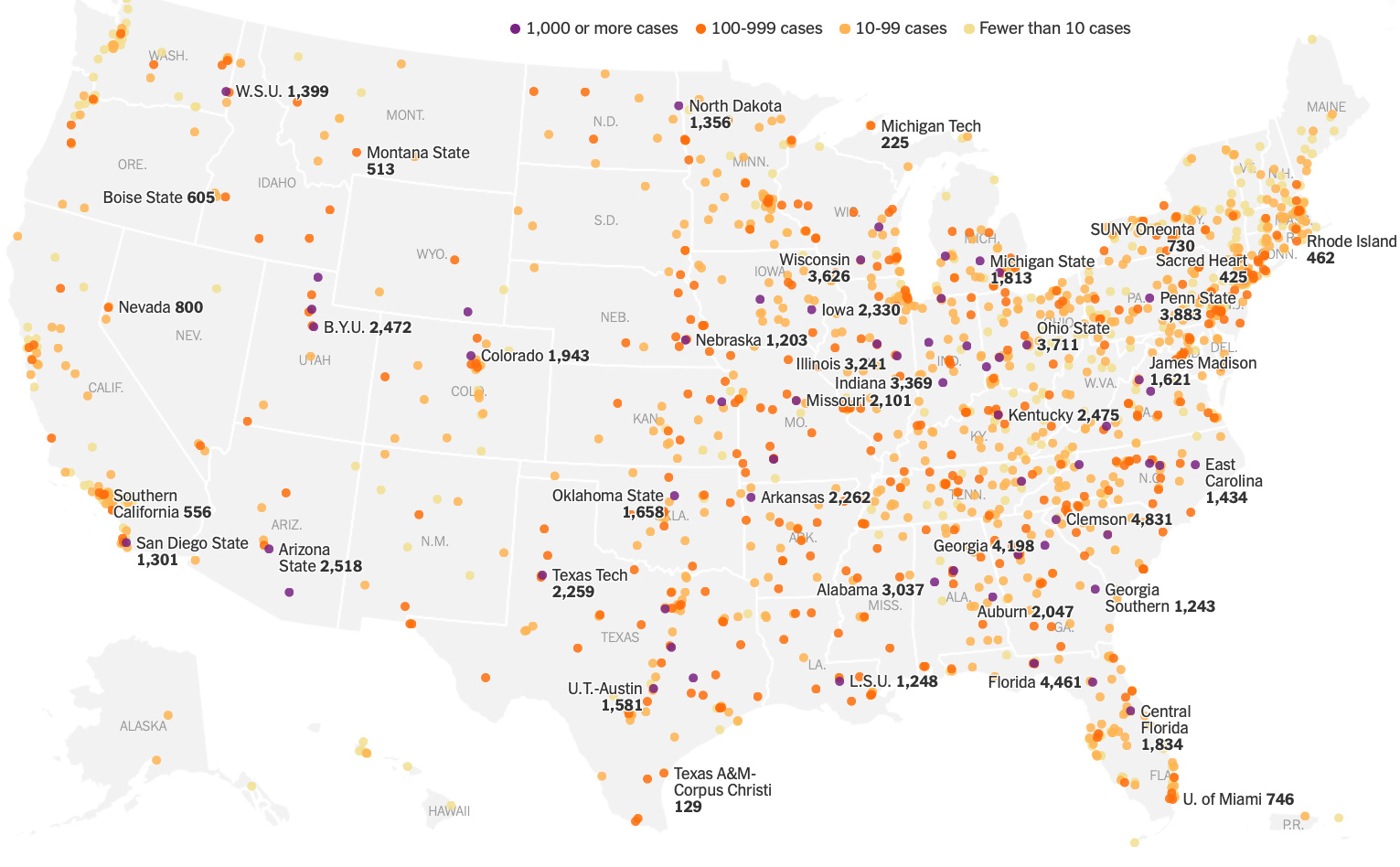 Brock U reports that 5 students living in 2 townhome households on campus have tested positive for COVID19.  Brock

Cambrian College reports an unspecified number of “members of its community” have tested positive for COVID19, in addition to “a member” back on Nov 4. (So this is at least 3 cases.)  Cambrian

McMaster U reports that 2 students taking Health Sciences classes on campus have tested positive, although they do not appear to be connected cases. They were last on campus Nov 2. (That makes 10 cases this fall – although these are both Mohawk College students, so…)  McMaster

Red River College reports 1 individual who was last on campus Oct 28 has now tested positive for COVID19. (I think that makes 5 cases this fall.)  RRC

uWaterloo reported a case of COVID19 “on our campus” on Friday. (I think that makes a total of 5 cases since Oct 1.)  uWaterloo

uWindsor has reported a 2nd confirmed case of COVID19 in a student residence. (The case is unrelated to the first.)  CBC

BCIT’s campuses are covered by the new PHO orders for the next 2 weeks, resulting in the suspension of all indoor recreational activities, practicums and field trips, aside from clinical programming for the School of Health Sciences.  BCIT

U Fraser Valley has also implemented new restrictions in response to Bonnie Henry’s orders for BC: employees should work remotely whenever possible, daily assessments, safety plans and masks are required, no indoor athletics activities will occur and all competition is suspended, and no social gatherings of any size will be held.  UFV

SaskPolytech has been gradually restoring its online platforms all week, after a cyberattack on Oct 31. All online classes should resume today, and “limited in-person learning is steadily being resumed.” (But all campuses are closed today due to snow!) SP will be implementing multi-factor authentication, new antivirus software, and information campaigns to raise awareness about phishing emails. SaskPoly

Simon Fraser U anticipates “a difficult budget cycle” due to COVID19 and uncertainty about investment returns, future enrolment, and the cost of transitioning to remote delivery. Currently SFU projects a drop of $26M in revenue. The board has approved tuition increases (+2% domestic, +4% international) for the current year, and similar increases for the next 2 years.  SFU

As you might expect, the Biden administration is likely to reinstate many of the Obama-era education policies that Trump and Education Secretary Betsy DeVos reversed. Trump repeatedly proposed deep cuts to education which Congress rejected; Biden has promised to triple spending on high-poverty schools. The incoming First Lady, Jill Biden, is an English prof at a Virginia community college and plans to continue teaching. The president of the California State Board of Education is reportedly heading up Biden’s education transition committee. In fact, Biden’s campaign platform includes an extensive plan for PSE.

“For America’s educators, this is a great day: You’re going to have one of your own in the White House.” – Joe Biden, US President-Elect, about his wife Jill

Funds for Precautions: Instead of denying the threat of COVID19 and pushing campuses to reopen anyway, Biden hopes to provide funds for pandemic expenses and clear guidance on safely reopening. (Funding bills in particular, though, will require the support of Senate – which currently looks to be controlled by a Republican majority.)

Stimulus Funding: US colleges hope that Biden can pass additional pandemic stimulus funding that might provide them with some direct support, and fund short-term certificate or diploma programs to retrain laid-off workers.

International Students: Biden has promised to repeal Trump’s ban on travellers from primarily Muslim countries, and has criticized policies designed to deport students whose classes move entirely online. Some 450,000 “dreamers” who entered the US illegally as children will likely no longer face deportation either, and undocumented students may have access to emergency financial support. Gradually, international students may start to perceive the US as a welcoming study destination again.

Gainful Employment: The Obama administration sought to rein in the worst excesses of the for-profit colleges and universities, which absorbed substantial amounts of federal financial aid for programs whose graduates seldom earned enough to repay the debt. The efforts resulted in for-profit closures, reduced enrolments, and conversions to not-for-profit status. DeVos hired former for-profit college executives to serve in the Education department, and eliminated the gainful-employment rule. Biden is likely to reinstate it – and Kamala Harris was actively involved in bringing down Corinthian Colleges when she was California attorney general. But many non-profit colleges objected to the accountability measures, too, which emphasized starting salaries at the expense of liberal arts and sciences programs.

Free Tuition: Biden has proposed making public colleges and universities tuition-free for families with incomes under $125,000. The Wharton School of Business at uPenn estimates that could cost $1.38 trillionover 10 years. This idea, originally promoted by Bernie Sanders, is extremely unpopular with Republican voters and politicians.

College Debt Forgiveness: Biden has committed to make 2 years of community college debt-free for students, particularly those from households earning <$125,000, and to double the maximum value of Pell grants. He may eliminate Trump’s revisions designed to cancel less debt of students who were misled by their colleges. He may also want to extend the moratorium on debt collection that has been in place since March.

Sex Assault: Just this May, DeVos introduced Title IX regulations to give students accused of sexual assault more due-process rights, and the right to cross-examine accusers in a live hearing.

Many other campaign promises spell good news for PSE and the planet, even if they are not specifically about education…

Net Neutrality: If there’s one thing we’ve had to face this year, it’s that broadband access is a fundamental human right, and that we need to manage information and misinformation online. Biden would likely reinstate net neutrality, preventing ISPs from privileging commercial sites. (Trump’s FCC repealed net neutrality in early 2017.)

Rejoining WHO: Biden has promised to rejoin the World Health Organization on the first day of his presidency. He also plans widespread free COVID19 testing during the pandemic, and funding for vaccine development and distribution, as well as economic stimulus for workers.

“Today, the Trump Administration officially left the Paris Climate Agreement. And in exactly 77 days, a Biden Administration will rejoin it.” – Joe Biden, US President Elect

Dogs:  Joe and Jill Biden will “build bark better,” bringing their 2 german shepherds, Major and Champ, to the White House. (Donald Trump was the first president in decades not to have a dog, and it showed!)

So although the Biden administration is likely to be a positive thing for the environment, multilateral trade and pandemic health coordination, diversity initiatives and education broadly, student debt, net neutrality, and public institutions – that doesn’t mean it will all be good news for colleges and universities in Canada or overseas.

As America becomes more attractive to international students again, obviously that growing slice of the global market will come at the expense of New Zealand, Australia, and especially Canada, who has benefited immensely from global perceptions of a xenophobic, racist, anti-intellectual country led by Donald Trump. (Those perceptions won’t disappear overnight, but will fade under Biden.)

Enhanced scrutiny of major for-profit institutions will (as it did under Obama) discourage or distract them from expansion into Canada or other countries. But gainful employment rules could also further discourage enrolment in the liberal arts and sciences – the sort of cultural short-sightedness that could easily spill over into cultural awareness internationally.

If Biden successfully ramps up investments in research funding, competition will be more intense for institutions in Canada and elsewhere to attract top research talent. And if he can implement free tuition programs, some US students will be less motivated to study in Canada just to save a few bucks!

I’m sure I haven’t thought of every possible implication of the Biden administration for CdnPSE – so please share your thoughts by commenting or emailing me.

Hope you have a great day!  Be safe and stay well,