Coronavirus on the Campaign Trail

Many CdnPSE campuses are observing a fall reading week, so I fully expect plenty of you will be taking a few days off yourselves. Not me though – I’m excited to be working today with the recruitment, marketing and communications teams at Capilano University, and have spent my weekend scouring the latest examples of PSE campaigns. Plus, of course, I have plenty of news about COVID19 and higher ed to share with you this morning.

But first, politicians have ALSO been busy this weekend…

Elections in a Pandemic

BC incumbents were celebrating what looks like a new majority thanks to an entirely unnecessary early election called by the premier.

“Premier John Horgan’s gamble to call a snap election during the COVID-19 pandemic paid off in an extraordinary fashion… [with] the largest NDP victory in BC history.” – Vancouver Sun

Last month, we saw a similar strategy pay off in New Brunswick for the incumbent Progressive Conservative party, and today Saskatchewan goes to the polls for what may well be a similar outcome.

Last week, Alex Usher pointed out that the competing platforms in BC and SK contain “diddly-squat” for PSE institutions to cover rising operating expenses. The BC Greens offered a minor increase to student grants, and the Liberals promised $60M for apprenticeships, work study, and healthcare training. The (apparently) winning NDP platform committed $45M to PSE, which would somehow stretch to review the funding formula, create more tech and ECE spaces, open a second medical school (at SFU Surrey), and much else. The Saskatchewan Party says they would add $2M more in scholarships, and the SK NDP would remove interest from student loans and make tuition free for youth entering from foster care. Overall, Canadian politicians are treating PSE like a utility, settling for “good enough” rather than aspiring to “world-class” institutions. Which, Usher argues, means that “more international students” is implicitly the political order of the day.  HESA

“You could almost say that ‘more international students’ is the implicit program of pretty much every party in the country, whether they know it or not.” – Alex Usher, Higher Ed Strategy Associates

COVID is the Real Winner 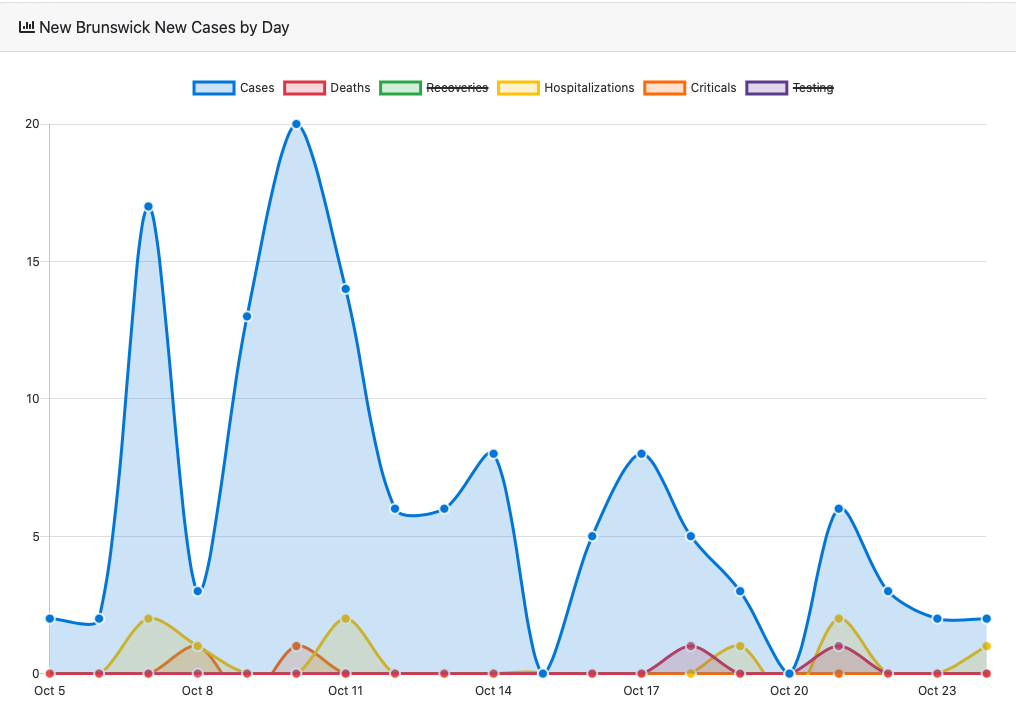 New Brunswick saw COVID19 cases multiply rapidly about 2 weeks after the election on Sept 14, as you would expect. (Of course, it’s tough to disentangle the combined effects of fall weather and school reopenings.) In Saskatchewan, we’ve already seen an outbreak thanks to a political rally held at a Prince Albert lumber yard on Oct 3. (US vice-president Mike Pence insisted on campaigning yesterday too, despite a COVID19 outbreak among his aides. The White House claims he is an “essential worker” with the election just 8 days away.) Sadly, we’re likely to see case counts in BC and Saskatchewan rise 2 weeks from now too.

Quebec surpassed 100,000 cases itself this weekend. Ontario recorded >1,000 new cases yesterday for the first time ever (probably still echoes of the Thanksgiving weekend), focused on the GTA – while oblivious politicians are trying hard to prevent PHO restrictions in Halton Region.

And of course south of the border, the US broke its all-time record for new cases on Friday with >85,000 – meanwhile people have been lining up for as long as 11 hours in order to vote early in the presidential election. We can expect the pandemic wildfires to keep raging out of control right through November.

Centennial College reported 3 confirmed on-campus cases for last week: a faculty member at Morningside campus, and 2 cleaning staff at Progress campus. (With a student who tested positive in September, that makes 4 this fall.)  Centennial

Durham College reports a confirmed case for a student at the Whitby campus. (Total 11 cases since Sept.)  Durham

uManitoba reports 4 more cases of COVID19, for a total of 10 since the fall began. (I’ve only reported 2 of them previously.) uManitoba

Mohawk College reports a student who attended the Fennell Campus on Oct 19 has tested positive. There are no college-related close contacts. (This is the 3rd case at Mohawk this fall, including 2 previously at the Stoney Creek campus.)  Mohawk

Languages Canada reports that 10% of Canada’s language schools have already closed, and 75% of its members were facing potential closing by year-end. Ottawa’s decision to permit international students to enter the country “will be a lifeline.”  Vancouver Sun

Capilano U enrolment is down -9% to 7,727 students. (Domestic is down -6%, and international down -13%.) Residence is running at less than half capacity. An $8.3M budget shortfall is projected. Only 5 faculty and 10 staff have been laid off.  Vancouver Sun

Sault College enrolment this fall is up +2.4% over its revised forecast, and down just 3.4% from last year – although international enrolment has fallen 36%, from 1,102 to 705. Sault has 441 students studying in Toronto and Brampton under a new partnership agreement with TriOS, a private career college. eLearning is up >20%.  Sault Star

Simon Fraser U is projecting revenues will drop from $802M to $776M this year. Ancillary earnings are expected to drop by $35M.  Vancouver Sun

uToronto Mississauga is estimating it will miss its budgeted enrolment by 9% this fall, driving $7.2M of a projected $12M shortfall for the year. UTM will use $11M from its central budget savings and $1M from delayed staff hires to balance the budget.  The Varsity

The latter half of last week’s presidential update video is a 3-min feature about wetland habitat restoration on BCIT’s Burnaby campus, simultaneously highlighting an approach to preserving in-person experiential learning in a pandemic. Ken Ashley, director of the BCIT Rivers Institute, describes the ecological importance of wetland areas, and shows us collaborative work undertaken by students from several programs: ecological restoration, forest and natural areas management, fish and wildlife recreation, and the Rivers Institute. They are re-excavating a wetlands basin, replanting and repopulating the area as a “unique living lab.” And he describes the distancing and disinfecting precautions being implemented to counter COVID19.  YouTube

Thanks for reading! Be safe and stay well,