I’ve got my hands full this week with a virtual keynote for the SEMM Forum tomorrow, and two days of MarCom workshops with the talented folks at Red River College, so the next few issues may be somewhat “streamlined.”

I do, however, want to dive into an important subject today: the impact of misinformation on our society, the role of higher ed to counter it, and the challenge of scholarly publishing paywalls.

But first, as I’ve been predicting for some time, the dominoes are finally beginning to fall in American higher ed. The US has exceeded 5 million confirmed COVID19 cases and 162,000 deaths. Now just 24% of US colleges plan a primarily on-campus Fall, and 15% a hybrid approach – and every day, more institutions backpedal on their previous announcements as the pandemic rages out of control across the country…

When even the most well-endowed Ivy League schools struggle to manage a safe return to campus, and face substantial deferrals by incoming students, NO college can afford to underestimate the challenges coming next month…

Princeton U announced Friday night that it was reversing its plan to bring undergrads back to campus next month. Because the pandemic “prevents a genuinely meaningful on-campus experience,” all undergrad classes will be remote. (Harvard previously announced a fully online fall term.) Princeton

On Thursday, Harvard U admitted that 20% of incoming freshmen are opting to defer admission, validating some of the early projections I summarized in Eduvation Bulletin #1. (MIT also reports that 8% have deferred, 8 times their typical 1%.) Harvard had been planning for 40% of their undergrads opting to live on campus, but has now cut their expectation almost in half, to 25%. Forbes

In Australia, about 3,700 FTE higher ed jobs have already been cut, according to the National Tertiary Education Union, but they anticipate as many as 30,000 positions eliminated over the coming year – notincluding casual employees. Already the U of Technology Sydney is bracing for $200M in losses and up to 500 layoffs, Melbourne U announced 450 redundancies, U New South Wales 500, Deakin U 400 and Monash 300. Sydney Morning Herald

Once upon a time, idealists (including me!) believed the internet would usher in a golden age of unlimited information and instantaneous global collaboration. Sadly, that neglected to take into account the many human vices and weaknesses that shape our economy and politics. Social media and citizen journalism has indeed turned the internet into a torrent of information – but also of MISinformation, abuse and hatred. Capitalists are trying to overturn net neutrality, as populist politicians undermine trust in science, education and intelligence itself.

The existential threat facing higher education is not the viral pandemic, but rising anti-intellectualism and ignorance in the world’s democratic states…

In times of anxiety or uncertainty, people are attracted to the “easy answers” provided by conspiracy theories for a false sense of security. Faced with a fast-moving global pandemic, public patience wears thin with the cautious, nuanced, and sometimes contradictory findings of medical science. The certainties and cure-alls proffered by snake-oil salesmen have always been seductive, but in an age of social media and clickbait, the voices of misinformation are amplified worldwide. Western News

Conspiracy theories about COVID19 are spreading dangerous misinformation downplaying the virus and discouraging masks or social distancing. Politicians, celebrities, and anti-mask movements can inflame pandemic outbreaks and make it difficult to bring the curve under control. The more people rely on social media, the more exposed they are to misinformation, and the more likely they are to disbelieve or disobey PHO guidelines. And as a Carleton study demonstrated in May, 46% of Canadians believe at least one COVID19 conspiracy theory. CBC

“Calling Bullshit” in a Pandemic

Biologist Carl Bergstrom, author of Calling Bullshit, emphasizes the importance of skepticism and data literacy in our digital world. High quality information has been vetted, triangulated, and presented in context. To avoid confirmation bias, “be just as skeptical of ideas that confirm your beliefs and desires.” Scientific research into COVID19 is evolving rapidly, so “the people you can’t trust are the ones who have not changed their views.” News media are increasingly reporting on preprint research papers, which have not yet been peer-reviewed. The real risk is that “this entire pandemic has been so politicized” that partisan media “cherry-pick” results and overinflate their importance. Scientific American

One of the great ironies and injustices in modern academia is that intellectual property rights and commercial publishers’ financial interests so often take precedence over students’ educations or the scholarly pursuit of knowledge and open collaboration. Over the years, movements towards open textbooks and open journals have made gradual progress, but one can hardly fault the public for its ignorance when lies are freely available everywhere, but the truth is buried behind atrociously expensive paywalls…

Truth is Paywalled; Lies are Free

It has been said that when the product is journalism, readers are charged for access; when the publication is available free, the reader is the product. The world’s most reputable newspapers and magazines have paywalls around most of their content, while partisan outlets like “Breitbart, Fox News, the Daily Wire… [or]InfoWars” offer their content free to the world, for viral sharing on social media. Academic paywalls have even more exorbitant pricing: “a white supremacist on YouTube will tell you all about race and IQ but if you want to read a careful scholarly refutation, obtaining a legal PDF from the journal publisher would cost you $14.95.” Free versions of scholarly articles are often early pre-review drafts, so “the more reliable an article is, the less accessible it is.” “How much more could be accomplished if knowledge were not fragmented and in the possession of a thousand private gatekeepers?” Current Affairs

Faced with a global pandemic, academic publishers have begun offering open access to COVID19 content in unprecedented ways, while use of online prepublication platforms has seen “almost exponential growth.” uMontréal’s Vincent Larivière observes that publishers are effectively acknowledging that “barriers to access are an obstacle to the advancement of knowledge.” Prepublications accelerate the spread of knowledge and its refutation, and there is no evidence that peer review eliminates erroneous or fraudulent publication. University Affairs

A Renaissance beyond Paywalls

Research findings, even when publicly-funded, have been increasingly hidden behind the paywalls of commercial journal publishers. But as the planet faces an extraordinary public health threat, COVID19 research is being shared, openly and collaboratively, to accelerate the mapping of the SARS-CoV-2 genome and development of a vaccine. Janet Napolitano, president of the uCalifornia system, argues that “lifesaving research should always be available to all,” but “will require a total disruption of how universities and publishers create and share information.” UC recently struck such a deal for 2,700 Springer journals, and cut ties with Elsevier over it. “Years from now, we will look back at this pandemic… as an inflection point – the end of restricting knowledge to a privileged few and the dawn of a new era in scientific progress,” a “scientific renaissance.” IHE

Of course, I have a gnawing suspicion that, once again, idealists are underestimating the resilience and ingenuity of capitalists to maintain the status quo, whether it serves humanity’s best interests or not…

Assiniboine CC is a “mask supportive environment,” meaning that “students, staff and the public will be encouraged to consider wearing a mask on campus, but will not be required to do so.” ACC

Brock U has just launched a new graphical tool for tracking the status of more than 20 categories of campus operations across 5 stages of activity. Currently in Stage 2, Brock hopes to advance to Stage 3 from Sep 1 “until at least Jan 2021.” Brock 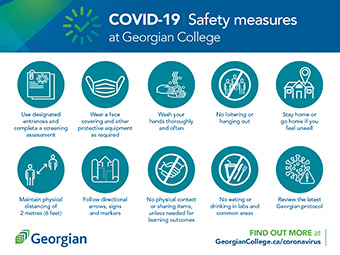 Georgian College has published a “What you need to know” page for stranded students returning to campus, including a video walk-through, link to COVID19 protocols, and a handy one-page poster with 10 icons for student responsibilities. Students will need to complete an online training module, download the Safe@Georgian app, complete daily screening assessments, and wear face coverings indoors. Georgian

Mount Allison U and the town of Sackville NB are working together on the “MtA Sackville Bubble,” recognizing that COVID19 needs to be managed both on and off campus this fall. The Community Commitment “calls for everyone to stay informed, remain vigilant on and off campus, and to uphold COVID-19 regulations.” (The Mayor of Sackville starred in an Allisonian Update video on Friday.) “We’re all in this together,” says the student union president. Chronicle Herald

Mount Royal U established a mask policy in July, while uCalgary and SAIT imposed them in early August, and the City of Calgary’s bylaw requires masks in indoor public spaces as of Aug 1 – likely meaning that AUArts and Bow Valley College will follow suit. Calgary Herald

I hope your week is off to a great start!  Stay safe and be well…