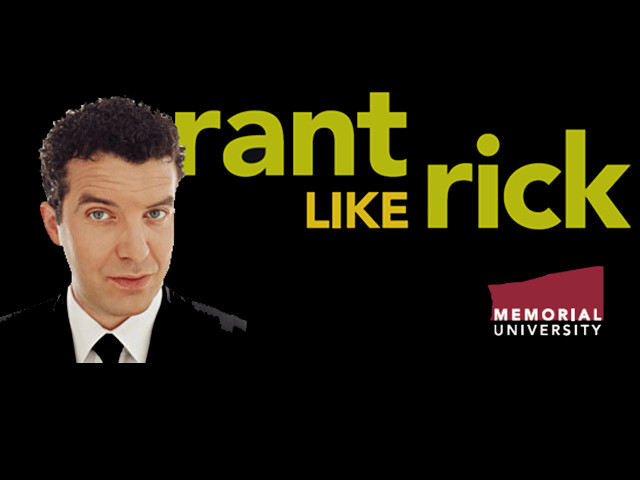 Rick Mercer is perhaps the most popular Newfoundlander across the nation, and although his degree from Memorial University is honourary, he has become an ambassador of sorts for the institution.

In 2007, MUN launched one of the longest-running social media contests in Canada, “Rant Like Rick.”  The contest invited new entering students to record their own “rant,” in Rick Mercer’s signature style, and then to submit it for judging and a chance to win thousands of dollars off tuition at MUN.  The contest ran in 2007, 2008, 2009, and 2010, and was promoted nationally through social media as well as traditional media (TV ads, posters, cinema ads, and transit shelters).

The contest for new students also triggered interest among current MUN students, who also wanted to rant. MUN incorporated a similar contest for current students into their annual MUNdays celebrations from 2008 to 2012, with cash prizes from $500 to $1000.

Over the 4-year lifespan of the Rant Like Rick contest, there were a total of 234 video entries. The prize for the top entry in the first two years was a tuition voucher for 2 semesters. In subsequent years MUN offered a cash prize of $10,000, which boosted entries fourfold.

Over the 5-year span of the internal MUNdays contest, 120 students from MUN’s 3 campuses entered video rants, and then competed in front of a live audience.

Ultimately, the campaign and contests were discontinued because of declining return on marketing investment, reports Victoria Collins, Executive Director of Marketing & Communications at MUN. “The first year garnered a lot of media attention and that gave us huge value for the dollars and time spent. But over the subsequent years we realized that the contest only appealed to a small segment of the potential undergrad audience. It is a special type of person who can write a rant, rant on camera and have it viewed and judged by the world!”

"All in all, Rant like Rick was a valuable tactic in our brand-building strategy following the launch of our brand in 2006. It reflected our positioning (Memorial offers the freedom to explore and experience your ingenuity) in an unexpected way. And it helped differentiate Memorial from other institutions as a place ‘where people and ideas become’." - Victoria Collins, Executive Director, Marketing & Communications, Memorial University