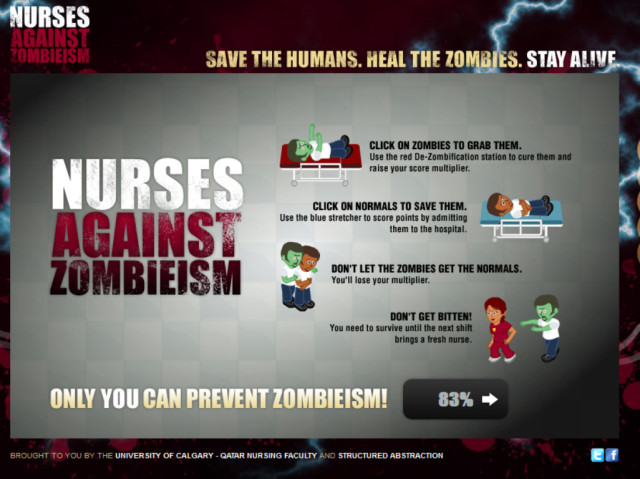 The University of Calgary – Qatar School of Nursing has implemented a multi-part strategy to recruit more male students into a field traditionally dominated by females. One eye-catching tactic is the launch of an online video game, “Nurses Against Zombieism,” built by Calgary’s Structured Abstraction, and launched to mark National Nursing Week.

Only quick thinking (and eye-hand coordination) can prevent a zombie apocalypse, in what has been called “Angry Birds for Nurses.” Instead of traditional zombie-hunter tools of the trade (shotguns, chainsaws, etc) players are nurses in a triage unit dealing with the results of a mysterious disaster. The nurses must save the humans by admitting them to the hospital, which prevents them from being bitten and infected by the zombies. Simultaneously, they have to wrangle the zombies into a de-zombification station that cures them. (It raises some interesting paradoxes: the Edmonton Journal asks, “Does the Hippocratic Oath apply to the living dead?”)

“It’s a twist on the traditional zombie mythology” says spokesperson Jenny Conway Fisher, who was the project lead from UCQ. “Creating nurse-hero characters that fight evil by healing instead of killing is a genuinely new idea, and one that we hope increases interest in the nursing profession both in Qatar and around the world.”

The $25,000 cost of development was paid by the Qatar government. A smartphone version of the game may be developed.

“The reason for creating a video game is not just educational or message driven, but to stimulate interest in nursing with a fresh and entertaining approach. Nursing is a truly diverse profession; today’s nurses are accomplished scientists, health administrators, researchers and clinical professionals. Yet there are lingering negative stereotypes about nursing that persist all over the world. We are working to combat those stereotypes using fresh and innovative ideas.” - Dr. Carolyn Byrne, UCQ Dean & CEO