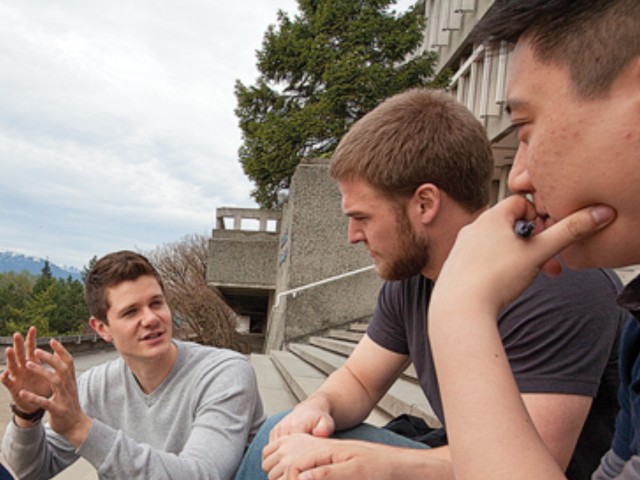 In April 2012, the Simon Fraser Student Society announced that they were finally going to right an injustice. Since 1974, SFU had funded a Women’s Centre – but now that men were the minority on campus (45% of SFU students), the Student Society thought that they deserved a similar “safe space” on campus.  Keenan Midgely, SFSS Treasurer, observed that men deal with more suicides, alcoholism, and drug abuse, and suffer negative stereotypes just as women do. SFSS committed $30,000 to establish the Men’s Centre, the same budget as the Women’s Centre.

The Men’s Centre mandate, approved by the SFSS board in April 2013, promises “a space where different meanings of masculinity can be explored and challenged,” and a commitment to “challenging the traditional notions of gendered ideologies and stereotypes.” The Men’s Centre will provide resources for men’s health, family and personal issues, provide peer support and referrals, and “promote the positive image of men as healthy partners, fathers, role models and community members.”

The initiative, naturally, was met with opposition. Feminist critics expressed concerns that the Men’s Centre would become “heteronormative.”  The Women’s Centre observed that the “Men’s Centre” is “already everywhere else.”

SFU is not the first campus to launch a Men’s Centre: the University of Manitoba launched a Men’s Resource Centre, although in July 2010 it ended its affiliation with UofM to operate independently in Winnipeg.

The Canadian Association for Equality is campaigning to create Men’s Centres on every campus across Canada. They promote the idea in this 5-minute video, which emphasizes the challenges of male graduation rates, homophobia against gays, workplace fatalities, prostate cancer, and parental rights: