Bring the Campus to the Fair 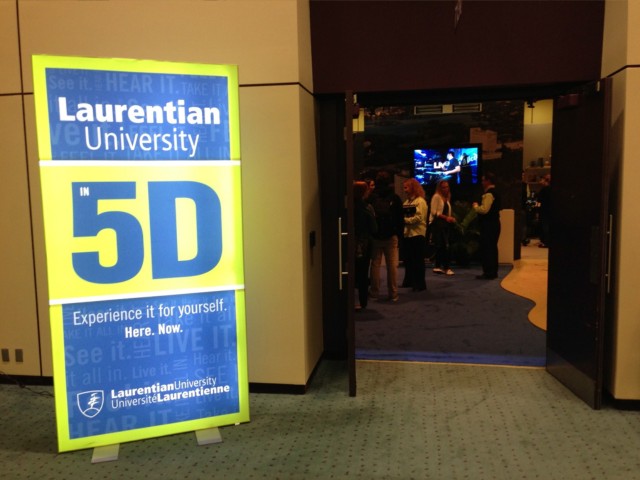 The Ontario Universities Fair is the largest PSE consumer expo in the world, with fewer than 30 exhibitors but more than 130,000 prospective students and their families flooding through the Metro Toronto Convention Centre in one weekend. (See my detailed blogs describing the OUF, with photos, in 2006, 2007, 2008, 2009, 2010, and 2011.)  Typically, exhibiting universities expend their creativity on print materials, carry bags, and large exhibits on the exhibit room floor, while the hourly presentations upstairs have been utterly conventional, with rows of seats facing a Powerpoint screen and one or two enthusiastic recruiters.

In September 2011, Laurentian University transformed its seminar room into something radically different, which they called a “5D virtual campus tour.”  The room was configured to represent key areas of campus: one corner a gymnasium where representatives could talk about athletics in detail, another corner a dorm room where students could discuss student life, and yet another filled with sand and a volleyball net, to remind all comers that Laurentian is Ontario’s only university with a beach on campus.

Laurentian’s President, Dominic Giroux, reports that in 2010 just 175 people visited Laurentian’s traditional seminar room.  With the transformation in 2011, more than 3,200 prospective students visited the room, and the unique approach certainly got people talking!