Today is a mouthful, according to the UN: it’s both “International Day of Remembrance of the Victims of Slavery and the Transatlantic Slave Trade” and “International Day of Solidarity with Detained and Missing [UN] Staff Members.” (Of course, yesterday was “International Day for the Right to the Truth Concerning Gross Human Rights Violations and for the Dignity of Victims,” which may just be a record.)

If you have simpler tastes, today is also Pecan Day and International Waffle Day. (Sorry I missed you yesterday for National Chocolate Covered Raisin Day, my personal favourite, and Wednesday for National Puppy Day. I was absorbed in preparations for a CMO Roundtable on managing staff diversity.)

I thought I should circle back today to the labour relations file, before another week slips by…

About a week ago, I summed up a month’s worth of CdnPSE strike action in this record-breaking year (see “Labour Strife & Leprechauns,” from St Patrick’s Day). Naturally in this fast-moving file, news emerged within hours on some of the bleakest fronts…

When I last wrote, the 16,000 academic staff at Ontario’s 24 public colleges had been “working to rule” for 3 months, since Dec 18, as OPSEU futilely attempted to negotiate with the CEC for some pretty big asks: job security for contract faculty, protection against outsourcing and public-private partnerships, new language around equity and reconciliation, and revisions to the workload formula “appropriate to the internet age.” The negotiator walked away in disgust back in October, and conciliation failed in November. The CEC insisted that OPSEU’s demands were “illegal,” contradicting the spirit of Ontario’s Bill 124, and insisted that the union put its final offer to a vote (which was rejected by 62%). By mid-March both sides knew the contract needed to go to arbitration, like previous agreements – but the CEC insisted on final offer arbitration, while OPSEU was demanding binding interest arbitration (in which the arbitrator considers the contract clause by clause). The CEC asserted that the outstanding union demands “fall well outside any acceptable provision. We can never accept them.” (Like OPSEU, I took the CEC at its word.)

Back on St Patrick’s Day, we were mere hours away from OPSEU’s strike deadline, colleges were already warning students what to expect, locals were planning their pickets – and although both sides agreed to meet one last time, I really didn’t expect some miraculous compromise to result.

And yet, literally at the 11th hour that Thursday night, the announcement of a “last-minute deal” hit the media. (The tweets went out at 10:53pm, before the midnight strike deadline.) After a marathon 12-hour virtual bargaining session, the OPSEU strike was averted, and all work-to-rule actions would stop immediately. This wasn’t a compromise: the CEC finally acquiesced, caving to the union demand of binding interest arbitration. The official line from CEC CEO Graham Lloyd was that, “after all that students, faculty and the college community have been through over the past two years, we felt it was essential that we put our differences aside and conclude these negotiations without a strike.”

(Personally, I have to wonder whether MCU minister Jill Dunlop intervened to change the CEC’s mind; certainly her public pleas – with an election just months away – was that “students cannot afford a strike.”)

uLethbridge faculty hit the picket lines on Feb 10, in what has been an “increasingly acrimonious” bargaining impasse over the usual issues: wage parity with comparator universities, equity for sessionals, and respect for collegial decision-making. The ULFA  filed an unfair labour practice complaint against the UofL board, while the University filed a bad faith negotiations complaint against the union. Meanwhile, students were disappointed that their long-awaited return to campus was being spoiled, while local businesses urged a resolution to restore their student revenues.

A Deal at Last!

Both parties entered mediation on Mar 14, but it didn’t look promising when I last wrote about it Mar 17. But the very next day, the ULFA announced it was putting a proposed collective agreement to a vote on Saturday, and by Monday it was announced that faculty had in fact ratified the new contract, by 91% of the vote. The strike ended Monday night, after 39 days, and classes resumed Wednesday morning. (The 4-year contract will run until Jun 2024.) ULFA president Dan O’Donnell reported that the union was generally “very pleased,” and that “while we didn’t get everything that we wanted, we nevertheless were able to get some movement on some of our most important issues.” Faculty will now have seats on the UofL budget advisory committee and senior administration appointment committees, but the contract is “obviously disappointing in terms of compensation.” (The pay increases are basically “tied to the GDP of the province.) UofL students are disappointed too: their semester has been extended by 2 weeks until May 5, and “innovative contingency plans” will help students unavailable to attend extended classes. As compensation, UofL is offering students a refund of 20% of their tuition, 25% of their recreation fees, and no-charge extended campus housing.

“I think it’s telling that unlike at other universities where people were able to reach settlements, at this university, we needed to go through a 5½-week lockout and strike.” – Dan O’Donnell, president, uLethbridge Faculty Association

Of course, as CdnPSE emerges from a 2-year pandemic, inflation surges upwards while provincial budgets tighten, collective agreement negotiations are tough everywhere. Since last week, things have been bubbling up in Quebec and Alberta in particular…

40 faculty and librarians at uSte Anne walked out (virtually, since the institution is online this term) on Mar 4, over the usual issues: pay parity with other institutions, and workload “rebalancing.” They’re still on strike 21 days later, and today reinforcements from across Canada will join them on the picket lines (at least 6 profs and librarians so far).

Last week, 2,500 unionized contract lecturers at uQuébec à Montréal voted 90% in favour of a strike, to send a clear message to UQAM administration after 29 negotiation sessions over more than a year have failed to reach a new agreement. The union says UQAM wants to increase probationary periods, reduce contract lengths, and remove lecturer qualifications to teach courses after 5 years. Lecturers are already on 15-week contracts with no job security, although they teach 60% of undergraduate courses.  CTV News

A “town crier” announced a strike by residence advisors at McGill U last week, “after nigh on 2 years of foul offers and vexatious negotiating tactics.” McGill apparently reduced its wage offer for RAs from $13.64 to $13.50 per hour. The RAs were going to leave residence halls over the St Patrick’s Day weekend, when arguably they are most crucial.  CTV News

200 AUPE caretakers staged an information picket at uCalgary on St Patrick’s Day, protesting budget cuts that cause “unnecessary pain” for some of the university’s lowest-paid workers. “Most of these workers are women, people of colour or new to Canada. They earn between $16 and $20 per hour, which is less than a living wage.” (AUPE points out that UofC’s president earns “$249 per hour.”) In view of UofC’s commitments to EDI, the union says “targeting” these workers is “hypocritical and shameful.” While AUPE says 24 jobs have been cut, UofC explains that only 16 positions were eliminated, with no layoffs (although some workers had hours cut). Contract negotiations have been ongoing for 13 months, since Feb 2021.  CTV News

“Most of these workers are women, people of colour or new to Canada. They earn between $16 and $20 per hour, which is less than a living wage.” – Justin Huseby, president, Alberta Union of Provincial Employees

Contract negotiations between Red Deer Polytechnic and its 3 unions have reportedly “not been going swimmingly,” and the faculty association and CUPE local have been without a contract since before the pandemic. Faculty are concerned that the current offer includes “some increases to workloads,” and that almost all programs have had to adopt some form of hybrid delivery. CUPE says “we couldn’t be any further apart” on bargaining, and has begun taking steps to permit a strike. AUPE, representing ~250 support staff, has been without a contract since mid-2020, and while negotiations aren’t as close to job action, they “could be headed that way.”  RD News Now

And speaking of miracles, students in Quebec are seeking one of their own…

On Tuesday, thousands of Quebec students marked the 10-year anniversary of the “Maple Spring” uprising, as some 80,000 students were “on strike” this week, protesting for free tuition and paid internships. (Over the past 8 years, Quebec tuition has increased on average just 3% – but students are concerned a larger hike might come this Fall.) As one McGill politics prof observes, “I’m really not sure where this will go,” as the Legault government wrestles with inflation and the pandemic.  Global News

“We are fighting for free tuition and a vision of education that is different. We are against commodification of education — we want to see universities and CEGEPs as essential goods that everyone can have access to.” – Lucia Flores Echaiz, UQAM grad student

Speaking of students being left behind, this startling spot made me choke, literally… 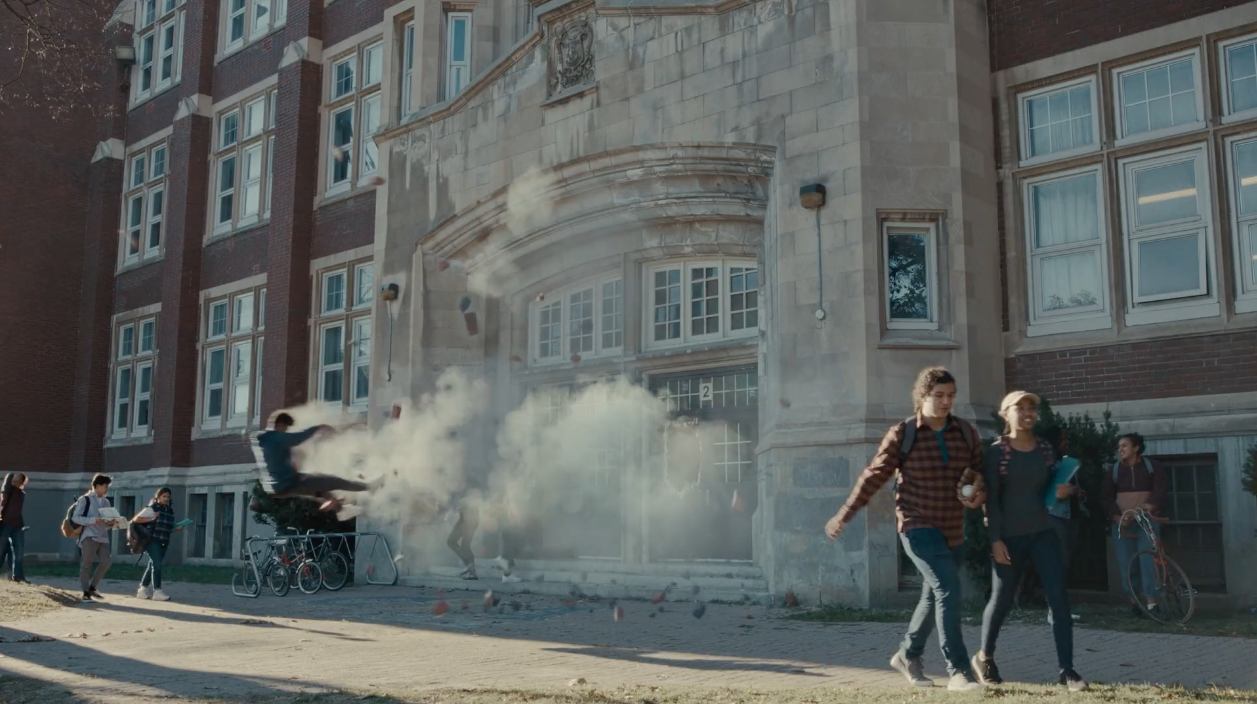 Pathways to Education is a non-profit that helps low-income students overcome obstacles to high school graduation and PSE participation, through wrap-around financial, social, academic and counselling support. The pandemic has only made things worse: “there is a growing gap between students from low-income communities and their education.” This :30-sec commercial, released back in October, depicts a racialized student being violently hurled backward out of class, and out of his school entirely.  Strategy  |  Pathways

As always, thanks for reading.

Have a great weekend, stay safe and be well!