Good morning, and happy “Wobbly Wednesday!” (Actually intended to raise awareness of Nystagmus, an ocular issue many of us in Ontario can’t get diagnosed right now anyway.) When it comes to this newsletter, Wednesdays are always a little bit wobbly for me: after a couple of lengthy issues Monday and Tuesday, I often take a day off mid-week.

Today is also apparently “Cliché Day” (as always, you can count on me!) and “Stress Awareness Day.” (After 19 months of pandemic anxiety, is there really an awareness issue?)

Anyway, in recognition of stress awareness and the Wednesday wobbles, I’m going to keep this issue very short today, to give us both a break! If you feel short-changed and missed the previous issues, check out “Fourth Waves and Fourth Doses” (Monday’s pandemic précis) or “Liminal Moment for Labour Relations” (Tuesday’s exploration of CdnPSE strike actions and governance concerns).

Instead of such heavy matters, let’s explore one big US news story a bit off the beaten path…

It’s rare for a university infrastructure story to gain national news coverage, much less to appear almost simultaneously in leading business magazines, but apparently this story has it all: a nonagenarian billionaire, donor interference, student protests…

97-year-old billionaire investor Charlie Munger is vice-chairman at Warren Buffet’s Berkshire Hathaway. He is also an “amateur architect,” says the Washington Post, who has donated “hundreds of millions of dollars to universities and high schools to build school facilities he designed himself.” (Slate came up with the headline, “The Munger Games.”)

“The arrogance of the proposal is breathtaking.” – Carla Yanni, Architectural history prof, Rutgers U

Munger is in the news this week for his proposed 11-storey, 1.7M sq ft, $1.5B “windowless mega-dorm” at U California Santa Barbara. The building, to be named Munger Hall, would contain 4,536 tiny single bedrooms, and 94% of them would have no actual window, only “virtual windows that would simulate sunlight” (as on Disney cruise ships, Munger says). He donated $100M to uMichigan to build a similar residence hall, doubling its capacity by ditching windows. “It’s a pretty cheerful place, these little bedrooms.” Students at a UCSB town hall meeting likened them to “solitary confinement,” a “self-storage warehouse,” and a “factory farm.” The Santa Barbara Independent dubbed the project “Dormzilla.” Slate calls it a “nightmare dorm.” Fast Company calls it “dystopian.”

“The building is a social and psychological experiment with an unknown impact on the lives and personal development of the undergraduates the university serves.” – Dennis McFadden, Architect 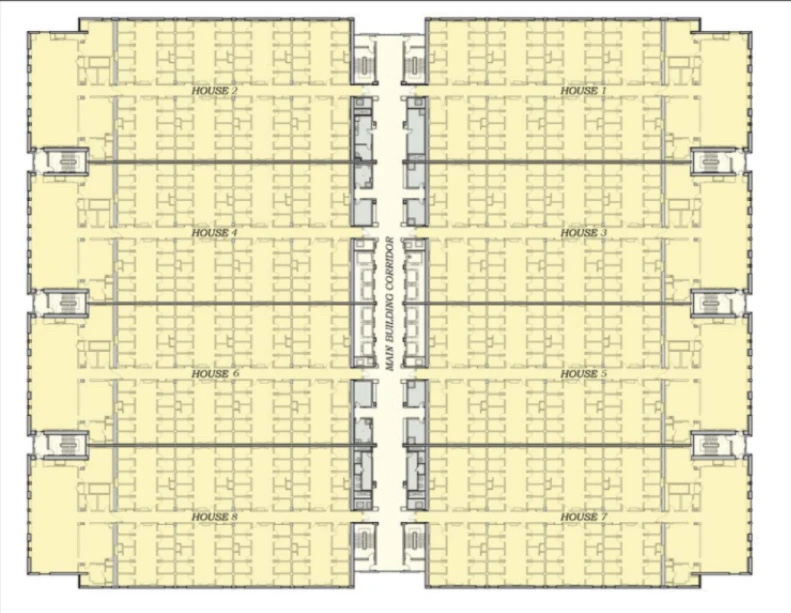 A 15-year member of UCSB’s architectural review committee, Dennis McFadden, resigned in protest, calling the proposed design “unsupportable from my perspective as an architect, a parent, and a human being.” The UCSB dorm would be the largest academic dormitory in the US, and would qualify “as the 8th densest neighbourhood on the planet,” said McFadden, “falling just short of Dhaka, Bangladesh.” It will have just 2 exits – and apparently no fire escapes. It will also radically transform the appearance of the low-rise waterfront campus, which overlooks the Pacific coast. (He has refused comment on the story, and says his resignation letter was never intended to be leaked publicly.) The UCSB Graduate Student Association says, “there is mounting evidence that Munger Hall, as currently designed, will have a detrimental impact on students’ mental health and bodily safety.”

I wonder if this “social and psychological experiment” has been submitted to the UCSB Research Ethics Board for approval?

UCSB has been struggling with a student housing shortage, using hotels as emergency accommodation for hundreds of students this Fall. They anticipate a need for 5,000 more campus beds as enrolment grows; little wonder they appreciate “Charlie’s vision” (and money). UC Berkeley was forced to halt enrolment this summer under a new application of California environmental law, because it had not built enough housing for students.

UCSB Chancellor Henry Yang calls Munger’s design “inspired and revolutionary,” providing affordable housing and minimizing energy consumption. The university says it is a “transformational prototype for world-class student housing” with “flourish and elegance.” (Slate calls it “Mungeropolis.”) For his part, Munger assures us he consulted multiple licensed architects: “This is not something that’s done by a nut case in a room by himself.” (How’s that for a textbook case of “reinforcing the negative” when talking to news reporters?) Despite the controversy, a spokesperson says the project is moving forward “as planned,” and is expected to open in 2025. (Isn’t it amazing what loyalty a $200M donation can buy?)

It’s not uncommon for students on many campuses to tell me that their residence halls were designed “by the same architects who design prisons.” There is no doubt that tiny, windowless rooms are a bad idea in a pandemic, and a worse idea with the echo pandemic of student mental health to consider! These dorms are starting to resemble overcrowded chicken coops…

Let’s escape the real world of pragmatic financiers, and explore the romance of northern Wales! (And no, it’s not a Hallowe’en video…)

Bangor U (Wales) released a new 90-sec TV spot this week, in Welsh and English, that speaks to prospective students, collaborators, donors and funders about its transformative teaching, student experience, and research – while also highlighting its unique location, facilities, and “epic landscape.” The ad, shot with a deliberately “cinematic quality,” uses subtle visual effects to convey ripples of magic emanating out from individuals at BU. (The English spot is voiced by Steve Backshall, a BU honorary lecturer, and popular naturalist, explorer, and TV personality.) No tiny windowless dorm rooms here!  The Bangor Aye  |  YouTube

As always, thanks for reading! Please do drop me a line if you spot something thought-provoking.