Staying the Course on Density

If you’re reading this, chances are good you still have electricity this morning, unlike some in southwestern Ontario and thousands in Newfoundland & Labrador, thanks to Hurricane Larry. (A whole other kind of storm was unleashed in Fredericton on Friday afternoon, as a bomb threat triggered the evacuation and lockdown of UNB, St Thomas U and NBCC. Thankfully that appears to have been a false alarm.) This weekend the world also marked the 20th anniversary of 9/11, and today Space:1999 fans mark the 22nd anniversary of the fictional “Breakaway Day.”

Somehow I doubt anybody in CdnPSE is recognizing “Boss/Employee Exchange Day” today, and in the midst of a fourth wave, “Hug Your Boss Day” should really be postponed too. While some people celebrate Roald Dahl or Housekeepers, Peanuts or Programmers, I suspect most of you would really prefer me to recognize “Positive Thinking Day.”

So far as the COVID19 pandemic is concerned, very little has changed since Thursday’s rather dark “Welcome Back to Déjà Vu”…

Oblivious students are continuing to party in Kingston, Guelph, and elsewhere, already apparently leading to outbreaks in Kingston’s University District. It’s not just PSE-age students, of course: wedding receptions continue to be major superspreader events, and in PEI, 18 schools in Charlottetown have been closed due to COVID19 outbreaks among children. 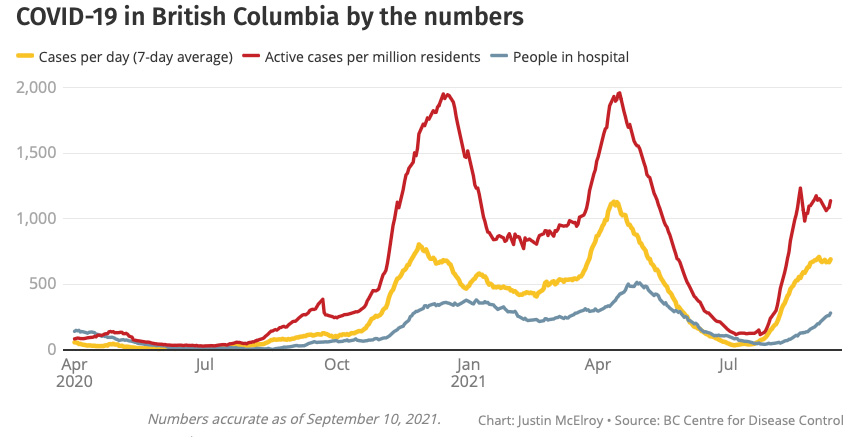 BC Hospitals a “Warzone”

In British Columbia, COVID19 case counts and deaths are reaching 3-month highs as the province’s new vaccine card comes into effect today. Hospitals in the Lower Mainland and the north have been cancelling surgeries as a surge of unvaccinated COVID19 patients and crippling nursing shortages bring some “close to collapse.” In Kamloops, a grandmother tragically died in a hospital waiting room where 3 nurses were trying to do the work of 24. 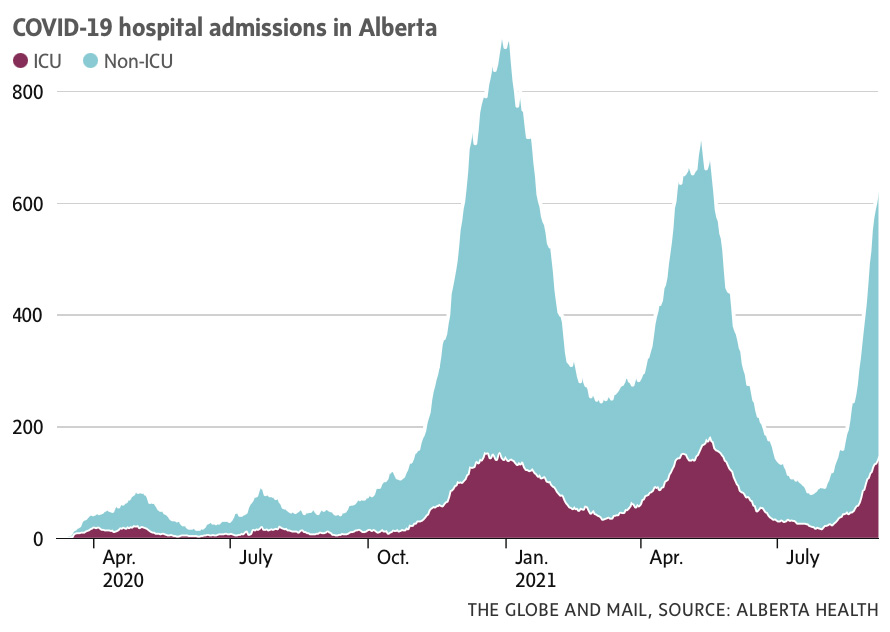 As the Alberta government stubbornly resists imposing rational public health measures like vaccine mandates or even passports, case counts are rapidly rising in a fourth wave that will soon rival the second and third. Outbreaks at long-term care homes near Calgary have doubled in a week. COVID19 hospitalizations have already reached record highs in the province, where physicians warn that the healthcare system is on the verge of collapse. Unvaxxed pregnant women are winding up in ICUs and even the morgue. Elective surgeries have been cancelled in the Calgary zone, some ICUs are “double-bunking” patients, and critical care triage is a grim possibility that may need to be implemented for the first time. (There is debate over whether vaccine status should be factored into the calculation of who gets ICU care and who doesn’t.) Calgary pediatricians are bracing themselves for a flood of children in ICUs with COVID19. Jason Kenney’s new $100 bribe (er, “incentive”) to urge the unvaxxed to do the right thing is “all but meaningless” since it will have little effect on hard-core antivaxxers, and it will take 6 more weeks for the newly vaxxed to develop protection. Evidence suggests that a vaccine passport and mandatory vaccination for access to social and cultural events, sporting competitions or restaurants is “the most effective and broadly acceptable measure.”

“This is much, much worse than I think people understand. We, as health-care workers, are telling you that things are very dire, that ICU beds are running out, that we are stretched very thin in terms of our hospital capacity.” – Shazma Mithani, emergency room physician, Edmonton

“Our health-care system truly is at the brink of collapse right now… Cases are going to continue to inundate our system and, predictably, people are going to die. And at this point, the cause is negligence.” – Ilan Schwartz, infectious-disease professor, uAlberta

Although Boris Johnson’s government has backed off from vaccine passports for UK nightclubs and events, US president Joe Biden has expanded vax mandates to include 100M American federal workers, healthcare staff and large employers. The momentum has been clear for months as CdnPSEs implement mandatory COVID19 testing and vaccination policies, but a few late-breaking announcements continue to trickle in. (See the Insider Recap on Vaccination Policies for the full chronological story.)

Bow Valley College announced Friday that, “after careful consideration, overwhelming feedback, and scientific evidence” it will require all students and employees on campus to be fully vaccinated against COVID19 effective Oct 22. Those who “choose not to vaccinate” will be subject to weekly rapid testing.  BVC  |  Education News Canada  |  Calgary Herald

U Canada West announced Sep 1 that all faculty and staff must be vaccinated to work on campus (1 dose by Sep 13, 2 doses by Oct 24). “While the current policy does not include mandatory vaccinations for students, we are currently exploring our options.” uCanWest

Capacity Limits in ON

Reader Marilyn Mason, VP Enrolment at King’s UC, asks if uWindsor is the only Ontario university “that is not taking the social distancing exemption for instructional spaces.” Since her question prompted me to dig a bit, I thought I would share in case others were also curious…

In late August, a number of ONpses expressed their urgent anticipation of new MCU guidance for the Fall. A joint statement was issued by Colleges Ontario and the Council of Ontario Universities. Loyalist Collegeexplained it was “awaiting further guidance” but was “planning for a gradual but progressive return to on-campus academic program delivery.” St Lawrence College announced it would reduce F2F programming “due to a lack of information” from MCU (but after the announcement, said that “our vaccine policy means we can have increased numbers of people using instructional spaces” and that “more programs” can have F2F components than last year).

On Tuesday Aug 31 (at what you might rightly call the 11th hour), Ontario’s deputy minister of colleges and universities issued guidance to ONpses advising them that the province would not require physical distancing or capacity limits in most classrooms. (The existing legislation limited indoor classroom capacity to either 50% or a max of 1,000 students, and enforced distancing.) Masks and vaccination/testing mandates would be required – which was really just MCU trying to get back in front of the parade, since most ONpses had already announced vax mandates. OCUFA objected, among others, to the removal of capacity limits, and MCU emphasized that institutions could set their own, stricter rules.

Within a day or two of the MCU guidance, I noticed plenty of ONpse statements that they did not plan to revise their plans for classroom scheduling at the last minute. (I didn’t track or report on these, because they were basically status quo, but Marilyn’s question has me retracing my steps.)

Some ONpses seem to be quietly considering ways to take advantage of the option for greater density in instructional spaces. (I mentioned St Lawrence College above.) Centennial College said it was “truly overjoyed to be welcoming more of our community back on campus” and warns that “some community members will have various personal space needs.” Trent U says it has been planning for a “full return to in-person learning” since announcing its vax mandate. Northern College sounds like it is planning to bring “all… staff” back to campus, and bring students back to its campuses in “a return to some semblance of normal.”

uWaterloo president Vivek Goel and Provost James Rush wrote students and employees within hours of the MCU guidance that, “out of an abundance of caution, we will maintain the approach we outlined in July,” a mix of online and in-person delivery with physical distancing per Ontario’s step 3. “Many” instructional spaces would remain limited to 50% capacity.  uWaterloo

“Out of an abundance of caution, we will maintain the approach we outlined in July. The trends in vaccination rates are positive, but we must remain vigilant as the fourth wave of the pandemic unfolds.” – Vivek Goel, president, uWaterloo

uWindsor president Rob Gordon spoke out Sep 2, emphasizing that uWindsor “has often taken a more robust approach to our health and safety protocols than others,” and that “we will not be increasing capacity limits or changing physical distancing requirements” in response to the new MCU guidance. “We made a promise to staff, faculty, and students that once announced, class schedules and delivery modes would not change.” uWindsor

“Despite this recent Ministry announcement, we made a promise to staff, faculty, and students that once announced, class schedules, and delivery modes would not change. This remains a promise kept.” – Rob Gordon, president, uWindsor

Carleton president Benoit-Antoine Bacon emphasized that despite the new MCU guidance, “we are staying the course with our fall 2021 plan and maintaining planned distancing requirements.” Measures will be reassessed for the Winter term.  Carleton News

“While the province has recently announced that they would allow flexibility with regards to physical distancing in classrooms, in consultation with local health authorities, we are staying the course with our fall 2021 plan and maintaining planned distancing requirements.” – Benoit-Antoine Bacon, president, Carleton U

As for the rest? Here are some I noticed…

Canadore says “program delivery is remote where possible, and a hybrid of remote and on-campus learning where necessary,” and that “facial coverings and physical distancing are still required.”  Canadore

uGuelph announced that despite the MCU guidance, “UofG will proceed with its plans to reduce density in classrooms” to no more than 75% or a maximum of 250 students. Elsewhere, UofG also explained that the new MCU guidance “aligns” with mid-July guidance, and with UofG’s preparations for Fall. Faculty teaching large classes with density higher than 75% “may opt for remote delivery.”  uGuelph News

uOttawa profs and students were still talking about the plan to deliver “bimodal” or “hyflex” classes, with half of students in person, and the other half online.  Ottawa Citizen

uToronto indicated that just 55% of classes were planning for in-person activity.  Globe & Mail

No doubt there have been other public statements – does anyone want to add to this for Marilyn?

It’s certainly not every day that a CdnPSE launches a new brand identity, so I certainly sit up and take notice when they do. Especially when it’s one of my favourite higher ed innovators…

Quest University, located amid scenic mountains in Squamish BC, is capitalizing on that inspiring setting in a new brand identity that adds line art of a mountain to the Quest wordmark that has been in use since it opened in 2007. This 3-min brand vid showcases the “new look for Canada’s most unique university,” one that “prioritizes education, not just the granting of degrees.” (I’ve written and spoken many times about Quest’s unique interdisciplinary “block method” of course delivery.) The Quest brand mission is “to equip students for their brightest possible future,” emphasizing discovery, critical thinking, innovation, individuality and community. “Education is a journey, not just a destination… There are no wrong routes when it comes to the diverse paths students may take in the process of reaching the summit of their dreams.” (I worry a bit, of course, when a university that just sold off its campus doubles down on its physical location for the brand identity, but the inspiring shape of the Stawamus Chief, one of the world’s largest granite monoliths, justifies the risk.)  YouTube