Today is apparently a day to celebrate sponge cake and cuban sandwiches (and perhaps remember the death of Rudolph Valentino) – but it’s also “Ride the Wind” Day (marking the anniversary of human-powered flight in 1977).

“Ride the Wind” seems to resonate most with today’s “Pandemic Précis,” and the accusation from CBC Manitoba reporter Bartley Kives that the province is choosing to “surf” as the Delta wave looms on the horizon…

It’s been slightly under a week since my last Pandemic Précis (“Are Kids ‘Sitting Ducks’?”). After my insanely-long Friday issue on “A Flood of Vax Mandates” (again, sorry about that), I’ll try to be really brief this morning…

The Delta variant of COVID19 evolved specifically to spread in the context of a half-vaxxed society, and it has a propensity for breakthrough infections despite vaccination, and carries 1,000x the viral load of the original virus. It continues to spread aggressively in regions with low levels of vaccination, from Vietnam and Thailandto Russia, Iran, and Mexico, and governments are imposing some harsh lockdowns to get it under control. Australia reported a record 914 infections yesterday, as 60% of the population remains under a strict lockdown, and projections of up to 2,200 daily cases in NSW has residents fearing endless “yo-yo lockdowns.” After 6 months of freedom, New Zealand is back in a nationwide lockdown until Aug 27, thanks to an outbreak of 100+ new cases. Healthcare systems are near collapse in Cuba and Lebanon, thanks to shortages of fuel, oxygen, saline and other critical supplies.

With about half of its population fully vaxxed, the US is reporting 42 COVID19 deaths every hour, and the pandemic’s death toll has now surpassed the Civil War. Many American hospitals are becoming overwhelmedby the Delta variant, struggling with patients who need antibody treatments and large backlogs of elective surgeries. The pandemic “has never been worse” in Mississippi: as COVID19 cases surpass 5,000 per day, 20,000 students are in quarantine and Mississippi’s hospital system is “rapidly approaching statewide failure.” Nearly 30,000 teens in the state have contracted the virus, dozens have been hospitalized, and several have died. “We have seen so much death, and now it’s young people dying of things we can prevent.” Across the US, paediatric hospitalizations with COVID19 are at an all-time high, with ~2,000 children in hospital, many in the ICU, and more than 400 dead. Mere days after returning to school, thousands of students are quarantined in Nashville, Mississippi, and Arkansas, and one county in Georgia has halted the school year.

“Children are filling hospital intensive care beds instead of classrooms in record numbers, more even than at the height of the pandemic.” – Mary Ellen Cagnassola, in Newsweek

“We’ve lost more people from COVID than we have from World War Two, and we’re not even willing to wear a mask or get a shot or stay away from a bar.” – Thomas Dobbs, PHO, Mississippi

“Because so many have chosen to willfully ignore the accomplishments and discoveries of the scientists of the late 1800s, we have pushed ourselves back to the disease-spread patterns of the Civil War.” – Rachel Lance, in Time

Florida governor Ron DeSantis is perhaps one of the most frustrating, outspoken Republicans contributing to the decimation of his state’s population by the pandemic. He has vehemently opposed mask mandates and vaccine passports, banning them from educational systems and cruise ships, and threatening school boards and colleges with financial repercussions if they defy him. Now, perhaps we have a glimpse of evil, ulterior motives behind his otherwise incomprehensible behaviour: one of his $10M donors is heavily invested in Regeneron Pharma, makers of a monoclonal antibody treatment for COVID19 which DeSantis has been promoting instead of prevention. Of course, the donor also holds shares in Pfizer and Moderna, so he wins either way, so long as the pandemic drags on…

As the Delta variant gains speed and vaccination efforts lag – and breakthrough infections mean that even fully-vaxxed people can be carriers or even be hospitalized – the CDC reversed its guidance in late July and started recommending mask mandates again – which has prompted increasingly hostile anti-vax and anti-mask protests and demonstrations across the US. Republican governors are banning mask mandates, but school boards in Florida, Texas and Arizona are defying them, imposing masks on millions of K-12 students as classes begin. The Texas State Supreme Court has upheld the governor’s ban, but children with disabilities are suing him in federal court. (At least the Texas Education Agency reports it has stopped enforcing the governor’s ban, for now.)

As resentment of anti-vaxxers rises among the vaccinated, it’s all too easy to fall into schadenfreude as we see some high-profile figures get their comeuppances. Texas governor Greg Abbott, who has been banning pandemic precautions and holding maskless political events, tested positive for COVID19 last week and is isolating at his mansion. Three US senators (Maine’s Angus King, Mississippi’s Roger Wicker, and Colorado’s John Hickenlooper) all tested positive last week, despite being fully vaxxed. Fully-vaxxed Texas representative Troy Nehls tested positive this weekend. In Wisconsin, Catholic Cardinal Raymond Burke, a rabid antivaxxer who claimed vaccines could contain microchips, has been hospitalized and placed on a ventilator himself with COVID19.

Across Canada, new cases are rising by about 3,000 per day, and we’re seeing them hit 2- and 3-month highs in BC, Alberta, Ontario, and Quebec. Health restrictions have been reimposed this weekend in the BC interior, and projections suggest that the province might hit 12,000 per day, putting stage 4 of BC’s reopening plan in doubt. (“It’s very likely we won’t be seeing a move to any more loosening of restrictions in the near term,” says BC PHO Bonnie Henry. New guidance for K-12 and PSE is expected this week.) Even the Northwest Territoriesis grappling with 198 active cases, and has called in the military to help.

Canada’s vaccination push has slowed to a mere nudge this month. A week ago, Canada had fully vaccinated 63% of the population, and as of Sunday we’re at just 65%. If our goal to fend off the fourth wave is 90% or more, as some epidemiologists suggest, it will take us until Nov 25 to get there, at this rate. Fully a third of Canada remains unprotected, including all kids under 12. 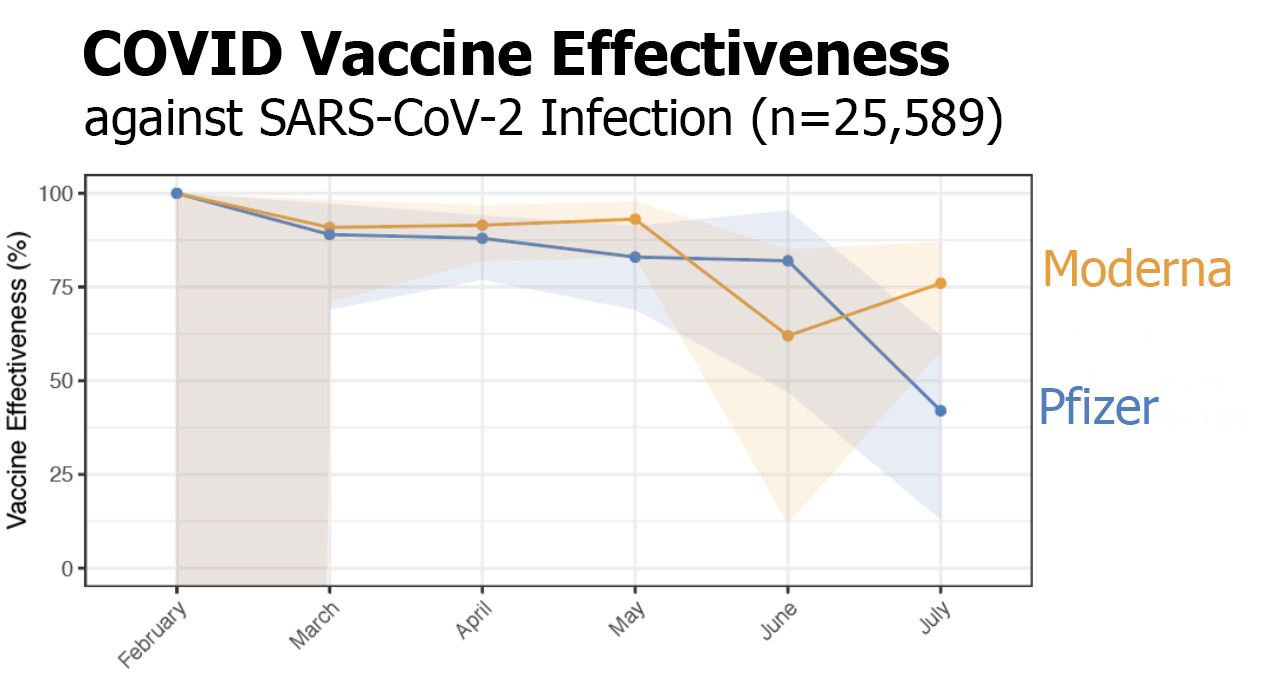 Although fully vaccinated people are 10x less likely to catch COVID19, 30x less likely to wind up in hospital and 75x less likely to be in the ICU, new studies suggest that protection against infection may be gradually waning over time. Preprint Mayo Clinic data suggest that Pfizer’s effectiveness against infection dropped to just 42% in multiple states last month (for symptomatic as well as asymptomatic infection). A Qatar study measured it at 54%. Israel reports a “significant drop in protection against hospitalization” among those over 65 who were vaccinated in Jan and Feb (down to about 55%), prompting them to administer booster shots to everyone 50+. About 1M Americans have already obtained a 3rd shot on their own. Germany, Hungary, and Britain have said they are doing the same. Pharma companies are naturally onside, and the CDC has started planning for 3rd booster shots in late September (8 months after the 2nd), particularly for the immuno-compromised.

“Vaccines are not bug zappers. They’re not force fields. The goal of the vaccines was to make breakthrough infections clinically inconsequential, and that’s what they’re doing.” – Amesh Adalja, Johns Hopkins Center for Health Security

Of course, the WHO has been an outspoken critic of affluent nations for hogging not just 1st and 2nd doses, but now also 3rd doses, when poorer countries still haven’t even vaccinated their healthcare workers. The Covax initiative, which aimed to deliver 2B doses this year, is so far up to just 178M. To prevent further mutations and ever more dangerous variants, the WHO recommends focusing on getting 10% vax coverage in every country ASAP – not to mention the ethical arguments for vaccine equity.

“No one seems to have gotten the message that the world is burning — and the status quo is unacceptable.” – Gregg Gonsalves, public health researcher, Yale U

As Delta wave infections and hospitalizations rise among younger and unvaxxed Americans, and evidence of vaccine breakthrough infections and spread accumulates, US higher education has begun to backpedal on their plans for a full return to campus in September. uCalifornia San Francisco has authorized its employees to continue WFH until Mar 1 2022. Cal State Stanislaus is reverting to online learning for the first 6 weeks of term. Rhode Island College has postponed the start of classes by 2 weeks until Sep 8. uFlorida apparently considered going virtual for the first 3 weeks, but was ordered back to campus by good ole’ Ron DeSantis. Even in Texas, Rice U, UT San Antonio, Houston Community College and Alamo Community Colleges are “temporarily adjusting” their approach, and now planning to start the fall semester online.

The situation in CdnPSE is certainly less extreme right now, and may stay that way… or we may see similar backtracking over the next 2 months. Certainly, the preferred tool to manage the risk of a return to campus is vaccination, and it seems much less politically partisan in Canada than the US. Since last week, there have been even MORE vaccine requirements announced in CdnPSE – more on that next time!

Reader Terina Mailer, Manager of Academic Advising at UBC Okanagan, is looking for examples of institutions that are combining academic and career advising programs really well. (UBCO is currently bringing them together under one umbrella.)

Reader Adrian Berg replied that “at the University of Toronto Scarborough, we are the Academic Advising & Career Centre and have been for many years.”

Does anyone have other good examples for Terina?

Reader Brian Scriver, associate registrar at St Francis Xavier U in NS, asks if there are any data points yet about whether secondary schools across Canada will be allowing recruiters to visit. (So far, the only announcements I’ve noticed come from provincial education ministries, and focus on academic delivery plans for Fall. It’s possible that school visitor policies will be determined week-to-week based on local PHO guidance, but that’s just a guess on my part.)

Does anyone have a better answer for Brian?

In contrast to the many calm, supportive (and yes, kinda boring) recent videos from CdnPSE leaders, McGill U’s associate provost Christopher Buddle is a great sport in this rather unique one…

McGill U released a 2-min “Return to Campus trailer” this month to “lighten the mood” in anticipation of returning to campus this Fall. Presented like a parody of a promo for a feature film, it contrasts the tedious world in which we wonder “will we ever wear pants again?” with the drama and anxiety of coming together in person again. “Together we are better.” (The :30 sec of bloopers and credits at the end is worth the wait.)  YouTube

Thanks for reading! I hope your week gets off to a great start!

Please drop me a line if you spot something interesting, thought-provoking or cool happening on your campus, or elsewhere in the world!