You may have noticed that the Insider was a bit quiet last week, not because I was on vacation, but quite the opposite: I was managing a 2-day virtual conference for the polytechnics marketing Guild, and facilitating a thought-provoking virtual board retreat for Bishop’s U.

Canadian colleges and universities have been pretty busy too, walking a number of metaphorical tightropes: recognizing Indigenous History Month while acknowledging the tragic discovery at the Kamloops Residential School; celebrating Pride Month while reacting to the Islamaphobic mass murder in London; urging vaccinations as rapidly as possible while trying not to stoke pandemic panic; optimistically promoting a return to campus this Fall while trying to reassure anxious staff and faculty of the safety of doing so. And of course, on many CdnPSE campuses, cheerfully celebrating the class of 2021, while sharing their sadness at the loss of in-person convocation ceremonies.

In many ways, as political leaders try to walk the tightrope reopening their economies while containing new pandemic variants, PSE leaders are navigating multiple tightropes as well. And apparently D’Youville College is literally bringing Nik Wallenda to its Buffalo NY campus this week, to walk the highwire!

With CdnPSE campuses largely emptied for the spring and summer terms, new cases over the past week have largely been confined to outbreaks at university hospitals in London and Calgary, with at least 33 new cases. (See my master spreadsheet for a running tally of 2,600+ cases in CdnPSE since Sept 2020.)

Calgary’s Foothills Medical Centre (adjacent to the uCalgary campus) reported 27 cases of COVID19 related to outbreaks in 4 units, including 20 confirmed cases of the pernicious Delta variant (B.1.617.2, or what we used to call the “India double mutant”). All but the first case were acquired in the hospital, and what is particularly disturbing is that 10 patients who acquired the Delta variant were already fully immunized. (I have tracked 87 cases at Foothills since Sept 2020).  Global  |  CBC  |  CTV

“To see outbreaks happening at this stage of the pandemic, it just goes to show that this virus… won’t rest. It will always make sure to keep us on our toes and we have to take every measure we can to protect ourselves from it.” – Cameron Westhead, United Nurses of Alberta

University Hospital, adjacent to Western U in London ON, confirmed a new COVID19 outbreak Sunday, involving “fewer than 5” cases in a transplant unit. (There were 12 previous outbreaks at UH between Nov 2020 and Mar 2021, with ~200 cases and 23 deaths.)  CBC  |  CTV

While many countries in the northern hemisphere enjoy a summertime respite from infectious disease, combined with effective lockdowns and quarantine policies, and substantial uptake on COVID19 vaccinations, the world remains decidedly uneven…

WHO Director-General Tedros Adhanom Ghebreyesus warned last week that the world is increasingly seeing a “two-track pandemic” in which countries with the highest vaccination rates are starting to lift restrictions, while others remain in extreme danger. In the first 6 months of vaccinations, 44% of doses have been administered in high-income countries, and just 0.4% in low-income ones. Vaccine inequity is giving COVID19 the opportunity to spread, and the virus to mutate.

“Increasingly, we see a two-track pandemic: many countries still face an extremely dangerous situation, while some of those with the highest vaccination rates are starting to talk about ending restrictions.” – Tedros Adhanom Ghebreyesus, Director-General, World Health Organization

Naturally, as we reopen economies and people relax their stringent social distancing, COVID19 case counts will rise. As you might expect, one week after Royal Caribbean launched the first North American cruise since the pandemic, 2 passengers tested positive and are now in quarantine. (At least they’re asymptomatic.) But many less self-indulgent populations are suffering the ravages of the pandemic, through no fault of their own. Case counts are dropping in India, but (thanks to the mortality lag and some reporting irregularities) the country is seeing record-breaking COVID19 deaths. Chile has locked down its capital, Santiago, following “some of the worst COVID19 case numbers since the pandemic began” – despite having fully vaccinated 58% of its population! (Mostly using China’s Sinovac vaccine.) The Gamma (P1 or Brazilian) variant is driving much of the infection curve, and ICUs are already at 98% capacity. Uganda reimposed a lockdown last week, closing schools and suspending inter-district travel for 42 days, in response to a new peak level of daily infections. New cases of COVID19 in Russia spiked by 47% in the past week, and more than doubled in Moscow (responsible for half the new cases). The city of Guangzhou, China, is suddenly reporting 96 new cases, resulting in new lockdowns, travel restrictions, and mass testing.

Japanese PM Yoshihide Suga claims “firm support” from other G7 leaders for his determination to make next month’s Tokyo Olympics “a success at any cost.” Brazilian president Jair Bolsonaro was fined for failing to wear a mask as he led a caravan of motorcyclists in Sao Paulo on Saturday. And, People’s Party of Canada leader Maxime Bernier was arrested by RCMP on Friday for participating in a small-town Manitoba anti-lockdown rally without observing the mandatory quarantine period.

Francis Christian, a clinical prof of surgery at uSaskatchewan and director of quality improvement and patient safety at the Saskatchewan Health Authority, is making waves with his opinions on COVID19 (which have been disavowed by the uSask College of Medicine and the SHA). Christian declares in a BitChute video that he is a “pro-vaccine” physician, but considers the COVID19 vaccines “an experimental injection” not “being made like a vaccine.” He claims the public is being “conditioned by fear” and that reports of case counts and deaths are “nonsense.” (Preston Smith, Dean of the College, published a blog post Friday dismissing the video as “promoting false views.”)  CTV

In the past week, Canada has made great progress in its vaccination campaign, although many regions are far behind the average… 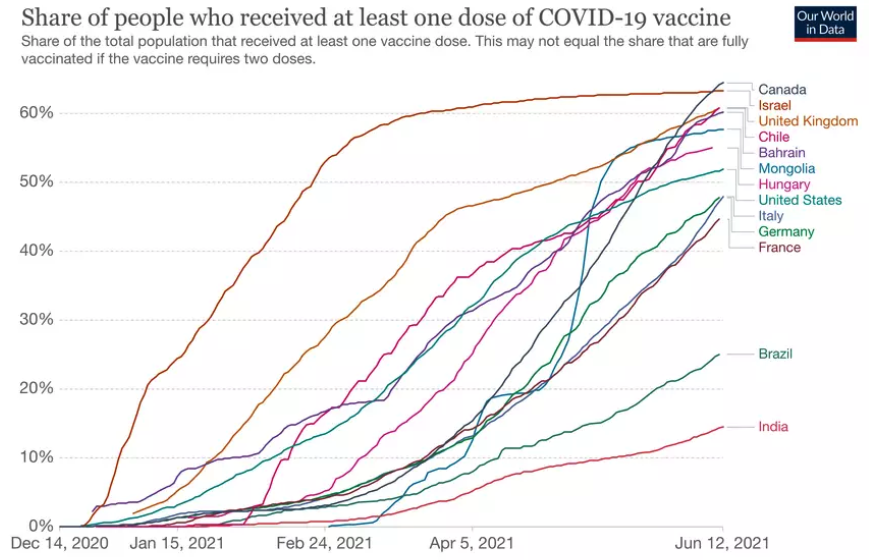 After months lagging behind the US, UK, Israel and other countries in our COVID19 vaccination efforts, in just the past week Canada has come from behind to lead the world’s nations on first doses. With 13M+ doses of COVID19 vaccine expected to arrive in Canada over the next 8 days, the country is on track to hit Theresa Tam’s goal of 75/20 (75% first doses, and 20% both doses) within 8-10 days. 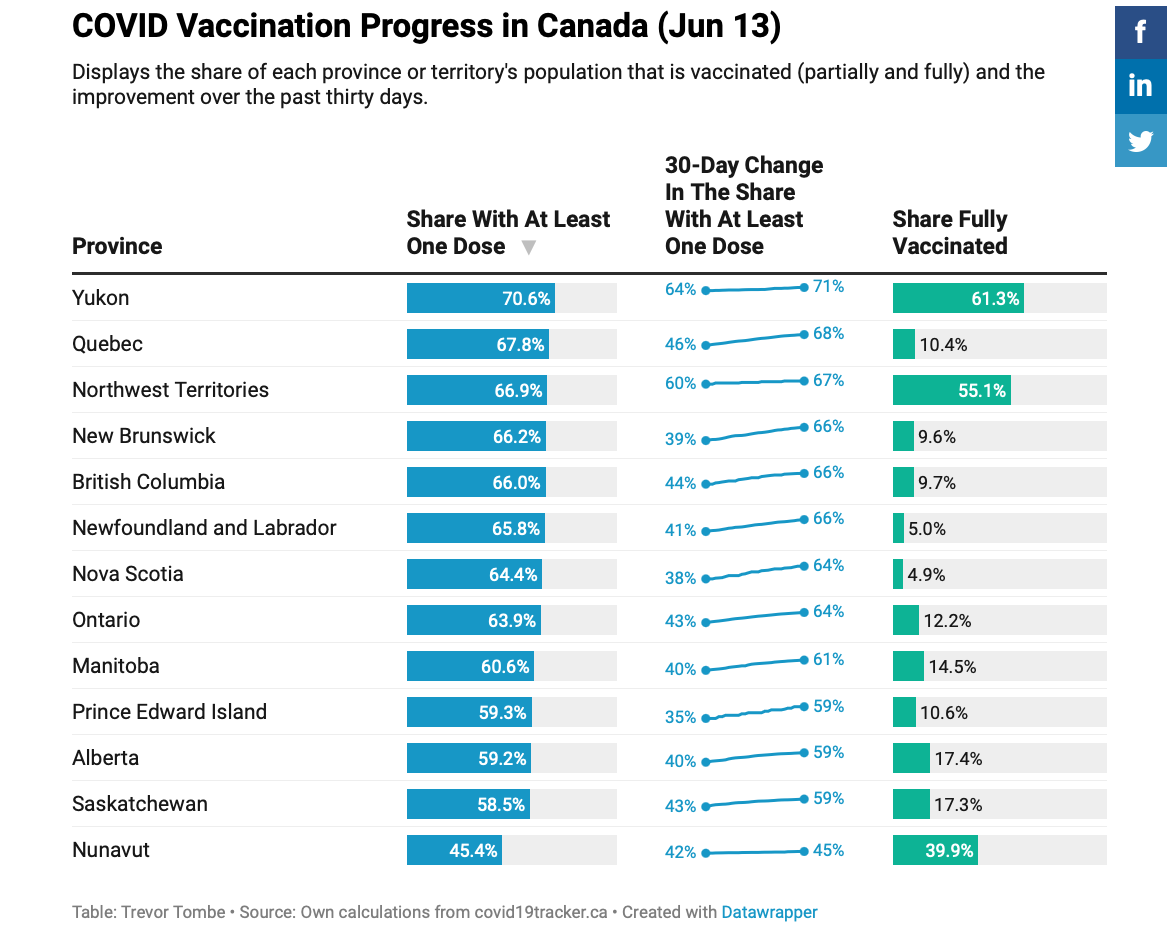 Of course, vaccination rates aren’t consistent between provinces, or even within each province. uCalgary economist Trevor Tombe is tracking vaccination rates on his website, and he reports as of Jun 13 that 75.6% of Canadians aged 18+ have at least one dose, and 15.9% have 2. (Of the total population, we’re at 64.3% and 12.1% respectively.) The far north is well ahead with 61.3% fully vaccinated in YK, 55.1% in NWT, and 39.9% in NV. Among the provinces, AB and SK have 17% fully vaccinated, compared to 15% in MB, and 12% in ON. With less than 5% fully vaccinated, NS and NL have the farthest to go.  Tombe

Over the past few weeks, Canadian provinces have unveiled their plans to reopen the economy, typically tied to vaccination rates and/or hospital or ICU occupancy. As vaccinations progress, most provinces are gradually reopening for our “one-dose summer”…

BC is moving to Step 2 today, lifting restrictions on recreational travel within the province, allowing outdoor gatherings to grow to 50 people, and allowing movie theatres to reopen.

Alberta has launched a $3M “Open for Summer” lottery to help overcome vaccine hesitancy, as first doses have plateaued in the past 10 days – particularly outside Calgary and Edmonton, where just 62.8% have a first dose. Thousands of open first-dose appointments have raised concern. (New cases are down, but cases of the Delta variant have more than doubled in a week – which premier Jason Kenney says is “not… alarming.”) AB moved to phase 2 of reopening last Thursday, allowing casinos, cinemas, museums and more to reopen at 30% capacity, gyms to reopen, and indoor dining to resume.

Saskatchewan has seen first doses stall, although it is approaching the 70% threshold to trigger the final phase of reopening.

Most of Ontario moved to stage 1 on Friday, reopening non-essential retail (supposedly at 15% capacity) and allowing the return of patio dining and outdoor gatherings of up to 10.

New Brunswick is inching closer to its 75% first-dose target for starting the first phase of its “path to green.” (Currently 74.2% of those aged 12+ have at least one dose.)

Newfoundland & Labrador moved back to alert level 2 on Saturday, with just 40 active cases in the province and no-one in hospital.

Since March 2021, I’ve been watching with concern as the B.1.617 strains from India spread around the world. Now called “Delta,” the 60% more contagious variant is rapidly becoming the dominant strain worldwide, because it has essentially evolved to thrive in a partially-vaccinated world. If Canada has a fourth wave of the pandemic this summer or fall, it will likely be driven by Delta…

Not only is the Delta variant 60% more contagious than the UK/Alpha variant, but it doubles the risk of hospitalization for those infected, according to a new Scottish study.

The Delta (B.1.617.2) variant has been proving its ability to break through vaccine protection this week. At the Foothills Medical Centre, adjacent to uCalgary, 11 out of 22 patients infected with the Delta variant had already been fully immunized, and 1 required ICU care. According to studies so far, the protection of a single dose of mRNA vaccines (Pfizer and Moderna) drops from 73% against the Alpha (UK) variant to just 33% against Delta. With 2 doses, mRNA vaccines offer 91% protection against Alpha and 88% against Delta, but the AstraZeneca vaccine is significantly less effective (33% with 1 dose, and 66% with 2). While Delta can break through immunity and infect people, the symptoms tend to be milder: Public Health England reported yesterday that a new study of 14,000 Delta variant cases found that 2 doses of Pfizer vaccine were 94% effective at preventing hospitalization, and 2 doses of AstraZeneca were 71% effective at the same objective.

“Any population that isn’t vaccinated is a tinderbox that’s waiting to explode and drive lots of cases and hospitalizations and new variants.” – Alyson Kelvin, virologist, Dalhousie U and VIDO

Yesterday, UK prime minister Boris Johnson extended the current phase of pandemic lockdown by 4 more weeks, delaying reopening by a month due to the spreading Delta variant, which accounts for >90% of new cases, recently rising by 64% per week. The latest UK models project that hospitalizations could match those of last year’s peak if the reopening went ahead as planned on Jun 21. By delaying the final stage until Jul 19, Johnson hopes to allow time for an accelerated second-dose vaccination program to progress. (Already, 57% of adults in Britain have been fully vaccinated.)  Global

“By being cautious now we have the chance in the next 4 weeks to save many thousands of lives by vaccinating millions more people.” – Boris Johnson, UK Prime Minister

New research suggests that the main symptoms of the Delta variant are headache, sore throat and runny nose, rather than the main symptoms of previous COVID19 strains, which were fever, dry cough and fatigue. The loss of smell doesn’t even make it into the top 10 symptoms reported by users of the ZOE symptom tracking app. In fact, many younger people with the Delta variant mistake it for the common cold.  Newsweek

As forensics and criminology programs proliferate, the temptation grows to promote them with videos that echo the police procedural genre…

Combining criminology and social justice, Crim students at U South Wales (Australia) take up historical cold cases, often of missing persons or unidentified remains, and reopen the investigation, consulting with experts in USW and beyond. This 2.5-min video nicely recreates the tone of many police procedurals, promoting enrolment in the program through a strong sense of purpose in the courses themselves, while also highlighting the “dream job” that might await when a student graduates.  YouTube

As always, thanks for reading! I’m working on a summary of the latest Fall announcements from CdnPSE, but it’s a big task so I’m not honestly sure yet whether you’ll see it tomorrow or Thursday.

Meanwhile, please do drop me a line if you spot something interesting, thought-provoking or cool happening on your campus, or elsewhere in the world!

Stay safe and be well, everyone. And I do hope you’ve had a chance to “stick it to COVID19!”