And of course, happy St Patrick’s Day to those of you in Newfoundland & Labrador, who get a government holiday today! Across the rest of CdnPSE, there is just the usual anxiety about unmasked student gatherings where green beer flows freely – and apparently the partying has already begun at Queen’s and Western. (Since Thursday, CdnPSE has reported 46 more cases!)

And speaking of “irrational” celebrations…

Yesterday, on 3.14.2021, the world of mathematicians, engineers, geeks and those who love them (and also most bakeries and pizzerias) observed “Pi Day.” Most higher ed social media accounts contented themselves with punny posts about pie, but some took it a bit further…

Swansea U Mathematics Society released a 6-min video yesterday to celebrate the “International Day of Mathematics.” Several students share their love of “maths” (regardless of their major), its utility and its beauty. YouTube

IUPUI math chair Jeffrey Watt shared a 4-min video explaining the history of pi, from Egyptians and string on down. YouTube

Ontario Tech spent at least 14 days building anticipation of its 4th annual “Pi Day of Giving” on social media, from countless tweets and posts to 20 vids on YouTube, including a flurry of quick testimonials and longer “Pi Day Speaker Series” lectures. Mechatronics student Marianna Correia even sings the value of pi to 20+ decimal places in this 1-min video. OnTech chose Mar 14 because pi is infinite, and is used to calculate the size of a circle: “Help us grow our circle of donors” and create “endless possibilities for our students.” When I last checked, they had raised 96% of their $100,000 goal.  OnTech

Selected key developments from the past 4 days… 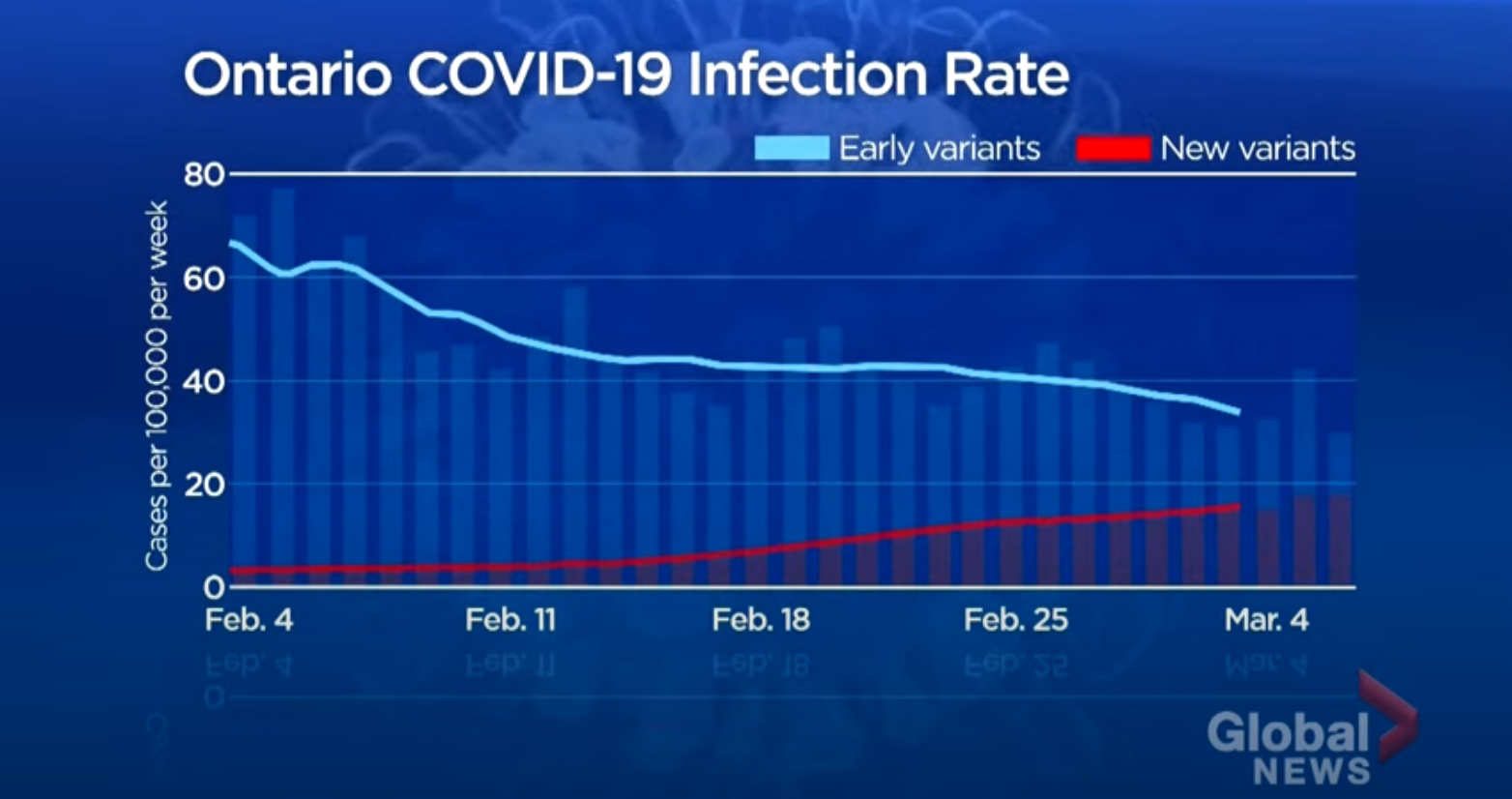 Pandemic within a Pandemic

We’ve heard that expression used metaphorically several times in the past year, describing growing concerns about mental health or domestic violence, but now it’s being used quite literally to describe the steady rise of COVID19 variants (now 40% of Ontario cases). Although the overall pandemic curve has been falling, it is now plateauing – and that plateau conceals what is really happening below the surface. “Right now we’re basically in the middle of a minefield,” says Adalsteinn Brown, chair of Ontario’s science table.

Rise of the Mutants

The UK variant (B.1.1.7) is not just 40-70% more transmissible, but it has been found to be 30-100% more deadly than previous dominant variants, and has now spread to >100 countries. (There have been >2,600 cases identified in Canada so far.) It can be controlled with existing vaccines, however: the forthcoming Novovax vaccine proved 96% effective in late-stage clinical trials, and 86% effective against the UK variant (and the Pfizer, Moderna and AZ vaccines have likewise proven >75% effective). Much more worrying is the South Africa variant (B.1.351), against which Novovax was just 49-55% effective, and the Brazil variant (B.1.1.28.1), which has proven to “blunt” immunity from vaccines or previous infection. That variant is the main reason that Brazil has entered “the deadliest chapter of its epidemic.” (So far there have been >207 casesof the SA variant, and >30 cases of the Brazil variant, identified in Canada.) The real concern, though, is the prospect of even more virulent, transmissible and resistant variants to come: already >700,000 COVID19 genomes have been sequenced in unprecedented, real-time genomic surveillance of the pandemic.

Lagging in the Vaccine Race

Although Canada did 3x better than the US at flattening the pandemic curve last year, and therefore suffered less than half as many deaths per capita, we’re now lagging well behind as the US has already administered 4x as many doses per person. Justin Trudeau says he expects to have vaccinated all Canadian adults by the end of September – but Joe Biden has promised that all American adults will be eligible for COVID19 vaccination by May 1 – less than 7 weeks from now – and expects small celebrations to be permitted by July 4. One French broadcaster observed that “we feel all of America’s power in this vaccination campaign,” as the US surpasses 21% of its population with at least one dose. (By comparison, Canada sits at 6.23%, Australia at 0.63%, and the UK at 36%.) Canadian tourism operators and manufacturers alike are concerned about the implications of a vaccination gap, even as small as 3 months. (Australia announced a $1.2B tourism support package last week.)

The Oxford/AstraZeneca vaccine has encountered a new obstacle, as several deaths due to blood clots have caused a dozen European countries to halt the use of batches of vaccine. (The WHO is assuring the world that the AZ vaccine remains safe, and there is no link to subsequent adverse events.) Meanwhile, Ottawa-based VBI Vaccines has a new vaccine ready for first-phase clinical trials, and Calgary’s Providence Therapeutics is wrapping up phase I trials.

This is No Time to Relax

Viruses mutate randomly, and particularly in individuals with weakened immune systems or being kept alive through heroic medical interventions. COVID19 has already proven it can become more deadly and resistant to vaccines, and “if we allow the virus additional opportunities to mutate, it will have more opportunities to become the worst version of itself.” As politicians ease health restrictions and attempt to reopen the economy, it will remain vital for the general population to continue wearing masks and maintaining social distancing, until the vaccines can block off the virus’ opportunities.

“Lifting a masking order not only means more people will get sick and die. It also gives the virus more rolls of the dice. That is a fact.” – John Barry, Tulane U School of Public Health

According to McMaster researcher Andrew McArthur, vaccinations will eventually tame the COVID19 pandemic, even if they have reduced efficacy against some variants. But Canadians’ springtime optimism is ill-advised: “Between now and then is extremely dangerous. I have short-term fears and long-term optimism.”

As the days grow longer, the weather milder, and the prospect of spring break, end of term, or imminent vaccination makes spirits lighter, more and more bad behaviour can be expected…

On Saturday, Montreal police issued 144 tickets and arrested 10 protesters – all for refusing to wear masks at a crowded anti-mask demonstration that attracted thousands of people. Some charges may still be pending for weapons possession and assaulting a police officer.

Spring Breakers are Back

4 of the hottest Spring Break destinations in Florida and Alabama are projecting hotel occupancy close to pre-pandemic levels. Miami reports 72% hotel occupancy and 74% home-sharing occupancy for the month of March – compared to just 11% last April. Orlando has invested $8M in a tourism marketing campaign, and expects to far exceed last year’s 12% occupancy during spring break. Gulf Shores and Orange Beach (AL) are projecting 60% occupancy of vacation rentals, the bulk of lodging there.  Newsweek

Fraternities and sororities are at the epicentre of many campus outbreaks this month. Expect these case counts to continue climbing as PHO restrictions are loosened and students celebrate reading weeks, spring breaks, St Patrick’s day and Easter…

Duke U (NC) has quarantined all of its undergraduates, effective Saturday night until at least Mar 21, after >180 positive cases in a single week. Duke administrators attribute the outbreak to “students attending recruitment parties for selective living groups” (ie Greek rush weeks). “Flagrant or repeat violators” may be subject to suspension or dismissal.  US News

Since my last summary Thursday, there have been 46 more cases of COVID19 reported by CdnPSEs, including outbreaks at Queen’s and Western. (See my master spreadsheet for a running tally of >1500 cases in CdnPSE since Sept 2020.)

Fleming College will resume some F2F classes today “with added safety measures in place” as the outbreak at Peterborough’s Severn Court student residence slows – but students at the complex will not be allowed to return until the PHO lifts the stay-at-home order. Cases at the complex now total 56 (up 5 from my last report on Thursday), including 44 presumed variants of concern, and 1 student is reportedly “gravely ill” and in a Toronto hospital. The local PHO makes it clear that it is impossible to calculate the total impact on cases in the region.  Global

Queen’s U has announced 10 more student cases, including an outbreak of 5 students living on the same floor in the Watts Hall residence on campus. Watts Hall has been locked down, and affected students have been moved into an isolation unit. The local PHO has ordered curfews and fines of up to $10,000 for any gatherings of >5 people, Mar 13-20, to try to curb St Patrick’s Day parties.  Global

Trent U apparently now has 8 cases in the Champlain College residence (up from 7 reported Thursday).  Global

Western U confirmed that some of its students were involved in “at least 10 different PSE student gatherings” held in private homes in London Mar 2-6. On Thursday, the local PHO declared an outbreak after 22 of the students tested positive. 3 of the students lived in campus residence and have been moved offsite to isolate. The outbreak appears to involve some of Western’s 15 off-campus fraternities and sororities. As contact tracing and testing continues, more cases linked to this outbreak are expected. (London’s mayor has vowed “there will be fines.”)  Global

“Keep your crowds down; keep your house parties non-existent; use your backyards; go to a bar or restaurant, enjoy a beverage, enjoy camaraderie and fellowship. But don’t do the dumb stuff, please.” – Ed Holder, Mayor, London ON

I’m tracking cases reported in CdnPSE university hospitals separately from those reported in the campus community, but since those hospitals are often located within the campus gates it makes sense not to ignore outbreaks there too…

University Hospital (adjacent to Western U) reported another outbreak on Friday affecting “fewer than 5 patients.” So far no staff have tested positive and there have been no deaths. UH has experienced 12 outbreaks since November, affecting ~200 patients and staff – and the last was resolved ~5 weeks ago.  CBC

Apologies for misattributing Allan Coyle’s title in the item about Okanagan College’s plans for Fall 2021 on Thursday. Allan is, of course, Associate VP External and Strategic Initiatives (not President). And my sincere apologies too to president Jim Hamilton. I have BBQed with them both, in sunnier pre-pandemic times, and certainly know better! (This is what happens when I’m writing in a hurry at 1:00am, and why I needed to take the day off on Friday…)

I’m a big fan of Stephen Colbert, and so even if it’s not a higher ed video, I think this musical recap is worth sharing…

One Year Since I’ve Been Outside

The 2-min “cold open” to Friday night’s Late Show with Stephen Colbert humorously summed up a year of COVID19, set to the classic Canadian Barenaked Ladies tune, “One Week.” It manages to squeeze in Peloton, Toobin, sourdough, sea shanties, antimaskers, Tiger King, space lasers, GameStop, and so much more. To give you a taste: “It’s been one year since I’ve been outside, I gained 11 pounds even though I tried… I have a tendency to trust Dr Fauci, I have an ass indent on my couchy.” Start your Monday with a smile and give it a listen.  YouTube

As always, thanks for reading; I hope your week is off to a great start!

Please do let me know if you spot something interesting, thought-provoking or cool happening in the world of higher ed.