Today I want to revisit developments at Laurentian U, which is still navigating its insolvency amidst all sorts of political fireworks – and plenty of silence and secrecy.

I also want to share some undergraduate enrolment trends and a few suggested strategies. Laurentian’s challenges aren’t all about enrolment, but to some extent it fits today’s apocalyptic theme…

Laurentian on the Brink

So far, all the negotiations and mediation in Laurentian U’s restructuring are occurring behind closed doors, and nothing has really happened yet – but there have been some remarkable things said publicly…

On Mar 5, the Laurentian U Faculty Association, OCUFA and CUPE jointly appealed the court order sealing correspondence between the university and the Ministry of Colleges and Universities (MCU) regarding Laurentian’s insolvency. A judge ruled on Feb 11 that disclosure of the documents could be “detrimental to any potential restructuring.” (You really have to wonder what the province and the LU administration discussed, that it could jeopardize negotiations with the unions, the federated universities, and creditors…)  Sudbury.com

At a virtual town hall Mar 3, organized by OCUFA, Save Our Sudbury, and local MPP Jamie West (NDP), speakers called on the Ontario government to provide secure funding for Laurentian U, and decried the in camera insolvency process. Roughly 400 concerned citizens participated virtually, but MCU minister Ross Romano “declined” his invitation. (Organizers highlighted his absence by featuring a “digital effigy of Ross Romano” during the Zoom call.) Some speakers accused the university of “malfeasance” in misappropriating research funds, and the administration of “collaboration behind the scenes” with the minister.  Sudbury.com

On Mar 10, Romano told the public that “students at Laurentian should feel comfortable continuing their studies at Laurentian because our government is committed to Laurentian University.” (Although, clearly not committed in a financial sense…) He declined comment on specifics of the CCAA process, because it is “before the courts.”  Sault Star

The federated universities that came together 60 years ago to create Laurentian U are clearly in the cross-hairs of the restructuring process, and uSudbury is proactively responding. The uSudbury board of regents has proposed it drop its english programs and focus on being a francophone institution. One of uSudbury’s biggest programs however, Indigenous Studies, is offered in English, and students in the program are concerned. uSudbury is discussing the potential of an Indigenous charter with its Indigenous communities.  CBC

At Tuesday’s meeting of the Laurentian Senate, president Robert Haché insisted that he could not secure more than $25M in financing (on $650M worth of real estate) because the campus is “purpose-built” and therefore not a “saleable” asset. As a result, that $25M will only cover operating expenses until Apr 30. “It is not an if, and, or maybe. That’s when the money runs out.” Therefore, Haché asserted, the CCAA restructuring plans need to be finalized, and approved by Senate, or “the university will cease to function as of April 30.” Assuming the plan is approved, Laurentian will enter phase 2 of the CCAA process, and the lender is expected to provide further interim financing May 1. (Phase 3, to begin in September, could involve sales of assets.)  Sudbury.com

“If the recommendation to the Senate is turned down, the university will cease to function as of April 30. It is not an if, and, or maybe. That’s when the money runs out.” – Robert Haché, president, Laurentian U

When senators asked whether a report on the LU restructuring plan could be provided to Senate in time to permit broader consultation, the administration’s response was that “mediation is ongoing, and participants are unable to comment on specific progress being made due to court-imposed confidentiality with respect to the mediation.” Senate’s elected representatives are expected to report back on the restructuring in the month of April, “hopefully” by Apr 15. Haché told Senate that there would be time for a “fulsome presentation, hopefully a fulsome discussion,” but that ultimately, their approval would be absolutely required. Senators are naturally frustrated at being asked to “rubber-stamp” a fait accompli.  Sudbury.com

In a message to “current and future students,” Laurentian president Robert Haché explained yesterday that “the next six weeks are critical to Laurentian’s future.” He continued, “provided Laurentian and its stakeholders are able to meet those conditions, we anticipate that by mid-April, current and future students will start to see emerging clarity around important issues such as how Laurentian’s academic offerings will be restructured for the Fall of 2021.” (The specific “conditions” are not described.)   Laurentian

Without a doubt, we’ll be anxiously watching events unfold as a public institution undertakes an insolvency process designed for private companies, negotiations continue in secret against a looming ultimatum, and the provincial government simultaneously tells students and creditors to assume business continuity, while refusing to provide support that could enable a more open, collegial approach to restructuring.

As I’ve said before, this is “tough love” from the province, allowing its creature to struggle with its back up against the wall rather than throw “good money after bad.” (Or perhaps, the point is to get the unions’ backs up against the wall…)

OK, on to something a little less gut-wrenching…

Yesterday I summed up announcements about grad school applications (which are way up in Canada and Australia, but down in the US thanks to their dependence on international students). Today, some undergraduate college and university announcements…

Ontario colleges, on the other hand, have seen a -6% drop in applications overall. While high school direct applications are down, non-direct applications are actually up +2.6%, perhaps because mature students find online learning more convenient or appealing. Colleges Ontario observes that their students often make decisions much later, “sometimes as late as a day or two before classes start.” (They are also much more likely to want hands-on applied learning.)  London Free Press

St Clair College reports record enrolment for the Winter 2021 term, up +21% over last year to 14,225 full-time students. Enrolment also grew “substantially” in the Fall 2020 term. Courses in both terms were delivered primarily online. “Remarkably, the pandemic has not adversely affected the pursuit of PSE – at least in the case of our students.”  St Clair

Western U reports that domestic undergraduate applications have surged +10% for Fall 2021, thanks in particular to strong programs in medicine, health, engineering and management. Enrolment for Summer 2021 has increased +15%, “possibly due to an increase in online learning opportunities.” UWO also credits a “highly effective digital recruitment strategy” for virtual campus tours, peer engagement and mentoring, opportunities to meet profs, academic advisors and staff, and attend “mini-lectures.”  London Free Press

Maritime universities reported a slight increase in overall enrolment, +0.5% in Fall 2020 over the previous year – despite the fact that international students account for 20% of their enrolments, and declined -3.8%. Students from Atlantic Canada rose +1.1%, and from elsewhere in Canada +3.9%.  CBC

Memorial U reports undergrad applications have risen +17.9% overall from this time last year (excluding medicine). New applicants are up +19.6%, and PSE transfer applications are up +15.4%. International applications in particular jumped +46.7%.  “Our admissions team really stepped up to handle the surge in applications, continuing to go the extra mile for applicants to the university. This is especially true since they were transitioning to remote work when many of these applications came in.” MUN will continue to accept applications until Aug 13.  MUN Gazette

“I’m thrilled with these numbers! I’ve said time and again that our students are resilient. Though they’ve had a tough year, they clearly see the value of PSE. And no matter what the Fall holds for on-campus instruction, the student experience will continue to be a priority.” – Vianne Timmons, president, Memorial U

Preliminary NSCRC data (as of Feb 11) show that the enrolment declines at US institutions last Fall have continued this spring: overall college enrolment is down -2.9% year over year. Undergrads are down -4.5%, while grad enrolment is up +4.3%. (As I outlined yesterday.) American community colleges have been particularly hard-hit, dropping -9.5% from last spring. International enrolments are down -16% for undergrads, and -5% for grad students. Enrolment in certificate programs, however, is up: +3.3% for undergrad certificates, and +15.4% for grad certificates.  Campus Technology

“Freshman Recession” in the US

Demographics can be destiny, and current cohorts of 17-year-olds were fixed in number way back in 2004. US colleges have known for some time that enrolments would hit a demographic “cliff” in 2026, but new analyticslook at projections for 454 individual institutions. 80% will see incoming first-year classes shrink after 2025, some as much as 20%, while the rest (including elite institutions and those recruiting from high-growth states) will see “very modest” gains at best. Location matters, but outcomes will hinge on recruiting strategies – and increasingly intense competition.  Forbes

Australian universities in the state of Victoria (which began their fall term this month) report that enrolments have surged up to +20% in nursing and biomedicine, thanks in part to the government’s recalibration of tuition. (Nursing fees have been cut -45%.) On the other hand, arts and humanities enrolments have declinedthis year: BA applications dropped -5.5% at uMelbourne, and up to -20% at Monash U.  The Age

Here are a couple of interesting ideas, out of thousands of course… 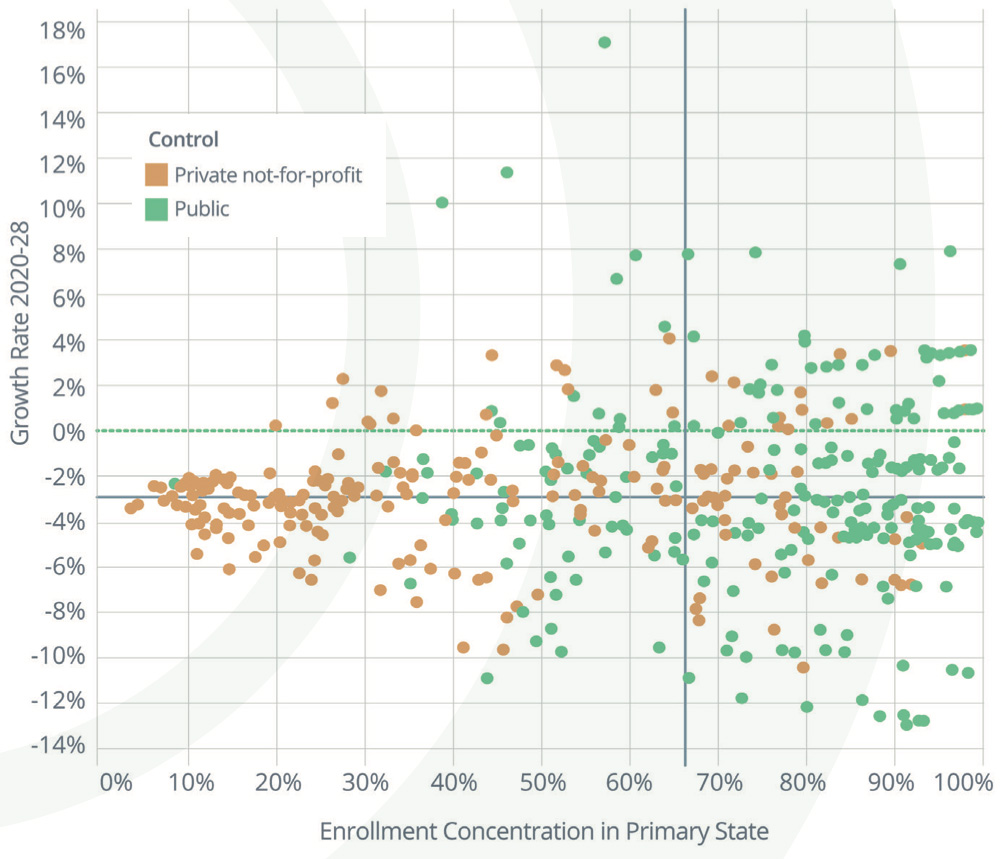 Institutions can be “unbridled” from the “three horsemen of enrolment fate” (geography, demography, and the economy), observes a detailed report on the looming “demographic cliff” facing US colleges. After a small rise for the next 4 years, first-time college-going Americans will decline -15% between 2025 and 2029 (particularly in New England and the East Central US). The critical issue, though, is not the location of your college, but where you recruit your students. Nimble institutions should invest in predictive analytics to boost retention rates, increase yield rates in their current market, and diversify recruitment to new regions and student populations – while ensuring they don’t neglect their own catchment and leave it open to poaching by competitors.  Orthot

Headcount Up, Enrolment Down?

What can a community college do if, come August, your enrolment numbers remain stubbornly low, despite solid student headcounts? EAB recommends you optimize faculty workloads by collapsing unfilled course sections, and consider offering late-start “mini-mester” sections of gen ed courses. You can identify students taking reduced course loads and encourage them to maintain their pace toward graduation, perhaps by offering grants to reduce or even eliminate the added tuition fee. You can reach out to stop-outs to identify and overcome obstacles to persistence. You may find university-bound students who have decided to defer, but might pick up a few credits locally from your institution.  EAB

Since yesterday, there have been 8 more cases of COVID19 reported by CdnPSEs. (See my master spreadsheet for a running tally of >1500 cases in CdnPSE since Sept 2020.)

Queen’s U residence outbreak at Watts Hall has now been linked to 28 cases (up 8 from yesterday). Students are being urged to get tested for COVID19, even if they are experiencing no symptoms, if they have had close contact with someone outside their household.  CTV

After starting today’s newsletter with stresses and strain in Sudbury, it seems only fair to bookend with a truly peaceful vid from Timmins, even farther north…

The Northern Way of Life

Yesterday, Northern College released a :30-sec video aiming to convey the northern Ontario lifestyle to prospective students. From “the cool, crisp air” and beautiful forests, to “the friendly, familiar faces of our tight-knit communities,” the “Northern way of life… is about so much more than education.” Northern College is emphasizing the majesty of the great outdoors, Canadian winter, and “potential adventures.” (The notes on YouTube, however, provide extensive details about programs and campuses.)  YouTube

As always, thanks for reading! Please do let me know if you spot something interesting, thought-provoking or cool happening in the world of higher ed.

Time to Loosen Our Belts?

Inching Back to Normalcy?

Between FoCo and Turkey Day…

The Future of Learning