I’ve had a busy couple of days, but want to thank the faculty and staff at University Canada West for a great session together (virtually) yesterday! Plus, a special shout-out to anyone reading this who might be joining me tomorrow at the Booth University College board retreat. Canada is fortunate to have such a diverse PSE landscape, and these are just 2 of the institutions occupying distinctive niches.

So, did you miss my usual wall-to-wall coverage of the pandemic this week, or was it a welcome relief to shift our focus onto the incoming Biden administration, the implications of Brexit, and the growing threat of Cyberattacks? Let me know your thoughts!

Today, let’s catch up on the week’s developments in CdnPSE, and the latest meme taking CdnPSE twitter feeds by storm…

We already knew that Pfizer would be delivering zero doses of its COVID19 vaccine to Canada next week, and that shipments would drop by 50% for 4 weeks. But last night we learned that shipments the week of Feb 1 will also be cut 79%. Provinces may be unable to deliver second doses on schedule, and will likely have to start reserving second doses in future.  Globe & Mail

Claire Cory, a Republican lawmaker in North Dakota, introduced a bill this week to ban wastewater testing for COVID19 as an invasion of privacy for students living on campus. Another ND Republican is sponsoring an initiative that would require a public hearing and vote before local officials decide to participate in state testing. (What is it about these people?!)  US News

Environics analyzed location data from 20M Canadian mobile phones, and calculated that 1.2M Canadians, many from affluent, white neighbourhoods, slept away from home at least one night over the Christmas holidays, despite government urging to the contrary. Apparently these holiday guests were disproportionately employed in business, finance, education and government; neighbourhoods filled with essential frontline workers had “fairly subdued” overnight travel. Travel rates overall were down 50% from 2019, but in QC and NL travel actually rose 15-20%.  Globe & Mail

“There is a trend we see with higher-socioeconomic-status families, this idea of personal control. These people are quite successful in their careers and in life, and so they think, ‘I have control over my own destiny, and the decisions I make are the right ones.’ ” – Vito De Filippis, Director, Environics Analytics

Apparently Florida governor Ron DeSantis heard about plans to market the vaccine to Canadian snowbirds, because on Wednesday he announced that proof of residency or property ownership would now be required for the shot. Sources report “huge demand” for private chartered jets.  CTV

“To just kind of come in from another country or whatever, we don’t support that and we’re not going to allow that… we’re not doing vaccine tourism!” – Ron DeSantis, Florida Governor

Linda Hasenfratz, CEO of auto-parts maker Linamar and Chancellor of Western U, travelled to Barbados in December, shortly after joining Ontario’s COVID19 Vaccination Distribution Task Force. On Wednesday, premier Doug Ford accepted her resignation from the task force, saying “we continue to urge everyone to stay home.”  London Free Press

“Western students got thrown under the bus last fall for get-togethers and parties… Meanwhile, their chancellor, a person chosen by the government to figure out how to get us all protected from COVID19… ignored the restrictions and kicked up her heels at the beach like she was on spring break.” – Jane Sims, Columnist, London Free Press

Yesterday, CdnPSE reported 13 more cases of COVID19, all but one in Ontario. (Many go unreported, but see my master spreadsheet for a running tally.)

uGuelph reported an outbreak of 7 confirmed cases yesterday, connected to “unsanctioned social gatherings” in the university’s East Village townhouses on Jan 15-16. “The number of positive cases will likely change.” (They won’t go down…)  uGuelph

Laurentian U announced a second case in its campus residence Jan 20.  CTV

Sault College reported a case who was on campus for “a limited time.”  Sault Star

Millions of Tests in Massachusetts

An extensive collaborative testing system implemented last fall by 108 Massachusetts colleges and universities could serve as an example for other jurisdictions. Students were required to take nasal swab tests at leastweekly, and PSE in the state performed some 2.8M tests over 3 months, in partnership with MIT/Harvard’s Broad Institute, where a $10M grant helped create capacity for 100,000 COVID19 tests daily. At $25 per test, one-quarter the commercial price, that still means Massachusetts institutions spent more than $70M on testing in the Fall 2020 term.  Boston Globe

A 21-year-old grad student at Baylor U, in Waco TX, died on Sunday of COVID19. On Monday, Baylor announced mandatory weekly COVID testing for all students. (A new on-campus lab can process 8,000 tests per day, with a 24-hour turnaround time.) Students who miss 2 tests will be prohibited from attending sporting events, and after 3 missed tests they will be blocked from campus wifi for the remainder of the semester. 4 missed tests could mean disciplinary actions up to suspension.  Newsweek

Bishop’s U, in Lennoxville QC, has hired a private firm to perform “pooled” COVID19 saliva tests in residence. The tests are voluntary, and anonymous within the pool. Should a pool test positive, everyone in the group will be “encouraged” to get a nasal swab test. Most classes this term are online, although some are blended.  CBC

Researchers at Western U announced this week a new COVID19 antibody test that is “quicker, more accurate, and cheaper than any approved so far in Canada.” The test, currently under peer review, uses serum or plasma samples, can be completed in just 5 minutes, and costs about $10 (vs $50-100 for other approved tests).  London Free Press

Pass/fail grading options are defined at Brock, debated at Ryerson, and “incompletes” skyrocket at some Quebec Cégeps…

8 Quebec CEGEPs report an increase in course incompletes for the Fall 2020 term, most spectacularly at Cégep de Trois-Rivères where they rose from 48 to 712. The ministry has waived the requirement of a doctor’s note during the pandemic; it is sufficient for a student to complete a form. Journal de Montreal

Ryerson U has rejected a student petition with 3,111 signatures calling for optional pass/fail grading in the Fall 2020 term. Unlike the winter term, the university argues there was no “sudden disruption” or “instant upheaval” in the fall, and the extended course date (until the final day of class) should be sufficient.  Ryersonian

It’s Friday, so cut me some slack – these are some bizarre and somewhat entertaining ideas, although I doubt they will truly catch on…

Razer unveiled a concept for a reusable N95 mask at the virtual CES this month, christened “Project Hazel.” The glossy transparent mask doesn’t just claim to be waterproof and surgical grade, with twin rechargeable ventilators – it also has microphones and amplifiers for “voice projection,” developed in conjunction with THX engineers. Oh, and it has multicolour LED rings for the cool factor, and to illuminate your mouth should people need to see it in the dark. (Somehow, I can see this being most useful for DJs, should dance clubs ever reopen…)  The Verge

VYZRTech is marketing a reusable “personal air purifying shield,” the BioVYZR, to the immunocompromised or those who love them. For $380 US, this 3-pound helmet would be at home in a 1980s Star Trek movie. It completely covers the head, and filters air through a KN95 filter using a battery-powered fan. The focus is clearly on respiratory droplets, not all forms of aerosol transmission, but unlike traditional masks, it doesn’t cover up facial expressions or impede lip-reading by the hearing-impaired. It also features built-in gloves and pockets, in case you need to adjust your glasses or blow your nose. (ew!)  Biovyzr

If you missed this meme on Wednesday and Thursday, it’s so “yesterday” today that it may be too late…

At Joe Biden’s inauguration on Wednesday, senator Bernie Sanders caught global attention for his attire (bulky parka, massive knit mittens, and a surgical mask) and his conscious social distancing (isolated in a folding chair). The #Berniememe went viral. Thousands of tweets featured Bernie and his folding chair in scenes from Game of Thrones, Queen’s Gambit, Star Wars and Big Bang Theory – and so much more!

The social media frenzy was aided by NYU masters student Nick Sawhney, who built a website, Bernie-sits, that will automatically insert Bernie into any streetview image from Google Maps. (Pull out your address book and try it; it’s addictive…) Within hours traffic to his Heroku website was out of control, and by the next morning it was processing ~70 visitor requests per second – and Google charging him thousands of dollars for the privilege.  Wired 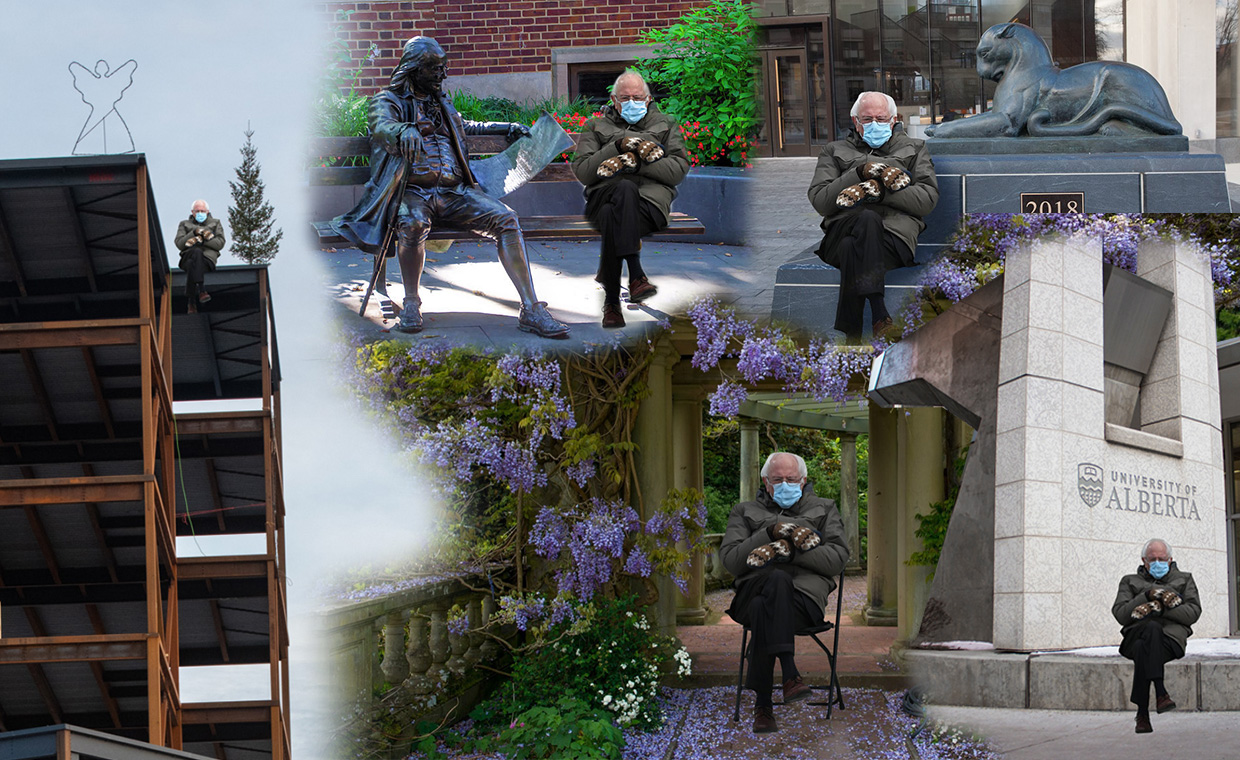 Here’s a smattering of higher ed #berniememes from uMichigan, uPenn, Royal Roads and UPEI. Kudos to UofA for pairing their parody with a health and safety message: “Be like Bernie. Wear a mask, maintain social distancing and don’t forget your mittens when it’s cold.”

I don’t think I can come up with a better send-off for you this weekend than that!  Thanks for reading,