Thursdays are my Pandemic Postscript day, when I try to update the news about COVID19 as succinctly as I can. (I’m probably coming to dread Thursdays as much as you are!)

But there are some interesting variations in national vaccination timelines, and some astonishingly bad trends in the prairies. (So bad that William Shatner has criticized Alberta.)

And the backlash against public health measures serves as a starting point for us to consider the psychology behind conspiracy theories and “freedom” protests, from youthful exuberance and a sense of invincibility, to toxic risk-taking masculinity…

Britain approved COVID19 vaccines from Pfizer and BioNTech yesterday, and intends to begin a nationwide immunization program as early as Tuesday. The US plans to begin vaccinating Americans in mid-December, as it continues to record >2,000 deaths daily from the disease, and has >100,000 in hospital. As Newsweekgrimly puts it, “America’s COVID deaths may be equivalent to a 9/11 every day by Christmas.” (Canada hopes to complete its review of the Pfizer vaccine “soon.”) Not to be outdone, Russian president Vladimir Putin ordered mass voluntary vaccinations to begin next week. (Russia has already vaccinated >100,000 high-risk people.) Australia plans to decide on vaccine approvals by the end of January, and start vaccinating health workers in March.

Canada’s prairie provinces now have the highest active cases per capita in the country. 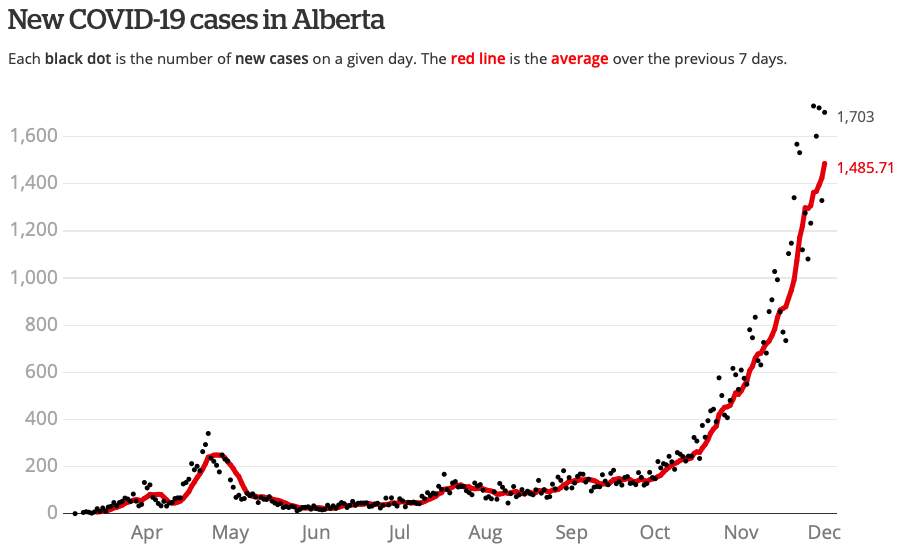 Alberta has reported >1,000 COVID19 cases daily for nearly 2 weeks now, and COVID19 patients are occupying 56% of ICU beds. Calgary hospital staff are being asked to conserve oxygen, an unprecedented request, and the province is asking the Red Cross about supplying field hospitals as the healthcare system gets overwhelmed. The province is stigmatizing COVID19 fatalities by publicizing the comorbidities of every death in the province, “inferring that the dead… bear ‘personal responsibility’ for their deaths.” Premier Jason Kenney’s approval rating has dropped from 61% last June to 40% last week, and his disapproval rating is second only to Manitoba’s Brian Pallister in the country. Hundreds of Albertans attended an anti-mask rally in Calgary over the weekend. Alberta remains a hold-out, insisting on its own contact tracing app instead of the federal COVIDalert app. It’s so frustrating that now Captain Kirk is “questioning the intelligence of Alberta-based life forms.”

Manitoba imposed restrictions on public gatherings and businesses 3 weeks ago, and finally the daily case counts have begun to drop. The province is nonetheless trying to expand ICU capacity, and will require most grade 7-12 students to learn remotely for the first half of January.

Saskatchewan has currently capped household gatherings at 5 people, and it seems unlikely that will be loosened before Christmas. Despite restrictions on public venues, the province is still “tracking towards a surge” with more community transmission now than at Thanksgiving. 350 doctors and >100 medical studentshave petitioned the province to do more, as ICUs across Saskatchewan approach capacity.

Quebec is setting new records for COVID19 cases, and imposing new capacity limits and fines on retail stores. Emergency rooms are already exceeding capacity, and 99 COVID19 patients are in ICUs. Doctors and nurses in the province are expressing concern about the rising COVID19 hospitalizations, and many are on sick leave. Premier François Legault said Tuesday he might have to cancel plans to allow multihousehold gatherings over the Christmas holidays.

Ontario has reported >1,700 new COVID19 cases for the 6th straight day, as deaths spike again and at least 183 are in hospital ICUs. (The province had indicated that 150 was the threshold at which hospitals are overwhelmed.) Toronto and Peel Region remain in lockdown, as new provincial models show Ontario could see>9,000 cases per day by Dec 30. Nonetheless, Premier Doug Ford is “really pushing” to halve the quarantine for travellers returning to Canada, and replace it with rapid testing. (Argh. You know what I think about the wide margin of false negatives…) At least he’s standing his ground against the retailers.

Elsewhere in Canada, PHOs remain concerned. BC PHO Bonnie Henry rolled out more restrictions on sports and banned all social interactions, as >10,000 people in the province are under active monitoring due to COVID19 exposure. Nova Scotia reported 17 new cases yesterday, New Brunswick 6, and Newfoundland & Labrador 1. Nunavut has lifted the 2-week-old lockdown in almost all communities, except Arviat.

Confederation College reports that “individuals” have tested positive “as a result of off-campus activities.”Confederation

Western U’s University Hospital outbreak has now expanded to 97 cases and 9 deaths, at least partially caused by a lack of PPE in staff break rooms. Later today, the provincial cabinet may move London into an Orange zone for next week, and the PHO warns that London might be a Red Zone by the week after that.  CBC

“The last thing we need now are super-spreader events dressed as Holiday traditions… Employers in particular need to create online events to mark the holidays for their staff members, if they don’t want their workplaces to turn into outbreak zones.” – Chris Mackie, Middlesex-London Health Unit

College of the North Atlantic plans to bring ~50% of students back to the classroom in January, particularly in engineering tech, health sciences and industrial trades programs. 40% will remain online, and 7% blended.  CBC

York U experienced a DDoS cyberattack last night, targeting university systems like eClass. IT implemented countermeasures and appeared to have the situation under control by 7pm.  Twitter

Based on June StatsCan data, sociologists at Western U report that older immigrant women living in urban centres are most likely to wear a mask, keep a distance, avoid crowds and scrub their hands. On the other hand, young men born in Canada and living in rural areas represent the worst-case for non-compliance with health precautions – and if they work in trades, their reluctance is even greater. Just 67% of adult Canadians reported they were willing to wear a mask, and while handwashing appeared to be more prevalent, “people tend to over-report hand hygiene.” Just over 80% said they would practice social distancing and avoid large crowds.  CBC

2020 has been a “banner year” for toxic masculinity, from refusals to wear a mask as a sign of femininity to a win-at-all-costs approach to elections. Peter Glick, a social psychologist at Lawrence U in Wisconsin, says Donald Trump exemplifies the sort of “locked-in, confrontational version of American manhood” that can show no weakness, even if it means denying reality and “debating his penis size.” Sadly, an organization governed as a “masculinity contest… is supremely dysfunctional,” typically infused with bullying, racial harassment, sexism and belittling of others. Men who refuse to wear masks are being “bold… to the point of recklessness.” They’re not thinking of masks as a heroic way to protect their loved ones, but as signalling “I’m afraid of a little virus.”  Politico

“We’re seeing a very reactive masculinity on the part of some men who value a kind of shallow, performative version of masculinity that is all about winning, about dominance, about seeing everything as a zero-sum game, that you can never lose, you can never show a chink in the armor, even if that involves denying reality.” – Peter Glick, Social Psychologist, Lawrence U

(Well, OK, maybe not the “sheriff” exactly…)  Nottinghamshire Police raided a 200-student rave in a campus residence at uNottingham last Saturday night. Police found parties both outside St Peter’s Court and smaller events inside, along with other gatherings in the area. Two people were arrested for assaulting a police officer, and another crashed a vehicle into a police car while fleeing the scene.  Newsweek

“Whilst it is heartening that the vast majority of people clearly understand and are obeying the current restrictions, it is deeply disappointing that so many others needed such an expensive reminder that the rules apply equally to everyone.” – Detective Superintendent Andrew Gowan, Nottinghamshire Police

Young people tune out public health messaging because so much of it is simply scolding them for social get-togethers without social distancing. “One-way communication doesn’t work,” explains Jaigris Hodson, associate prof of interdisciplinary studies at Royal Roads U. “Young people are especially likely to tune out broadcast-style messages because they’ve grown up with social media that is centred on dialogue.” YouTube news conferences and Twitter PR feeds are “tone-deaf and inauthentic.” Federal NDP Leader Jagmeet Singh and Toronto health communicator Naheed Dosani have both embraced TikTok, but PHOs have not. In addition to meeting young people where they are, public health communicators “need to listen to young peoples’ frustrations, fears and concerns. Then they must speak to young people like human beings, rather than scolding them or speaking as a parent or teacher would to a child.”  The Conversation

uMelbourne released a 2-min video quite unlike their other recruitment spots, compiling excerpts from 20 videos by members of the campus community, into what I can only describe as a pounding, psychedelic kaleidoscope of time-travelling bears, a day in the life of a student, and welcome messages from people across campus. “What comes next is a fresh start. As you approach the end of an era, run head on into the next.”  YouTube

Tomorrow, I’ll conclude this essay into the psychology of anti-maskers with a look at political hypocrisy, caution fatigue, and COVID shaming.  Meanwhile, be safe and stay well!