Today is Canada’s 8th annual Giving Tuesday, so I’ll focus on some recent stories about advancement and fundraising, and draw on just a few of the thousands of tweets, stories, releases, videos, and social campaigns that were circulating early to pave the way for today.

Well, a busy day in CdnPSE, with 72 new cases of COVID19 reported since yesterday…

Bishop’s U now reports they have had 23 cases this fall among students in residence, and 30 cases off-campus. (This brings the total this fall to 53, up 25 from the 28 I reported last Wednesday.) Of those, 17 cases have recovered.

uCalgary has reported 18 new cases since my last tally Nov 17, bringing the total to 132 cases this fall.  uCalgary

Western U’s University Hospital has reported 26 more cases in its outbreak, now totalling 80 cases and at least 4 deaths, and is cancelling outpatient appointments. About 3,000 hospital staff are being tested. (Western’s total is now 167 cases this fall.) London Free Press

uWindsor reported another on-campus case yesterday, for a total of 11 this fall.  uWindsor

Yesterday I summarized the controversy over in-person exams in Quebec, but it is arising in other regions of the country too…

St Francis Xavier U plans to proceed with in-person exams this month, although some students have turned to the media with their concerns that the school is not doing its part to control the spread of COVID19 by moving to an online format. Provost Kevin Wamsley wrote to students that they should “keep calm and study on,” and that “we have successfully navigated the semester free of COVID to date and we fully expect to complete semester as planned, including our exams.” Some students who rushed home early, before the Atlantic Bubble burst, want accommodations for their exams.  Global

Refocus Your Case for Support

Amidst a global pandemic and a massive economic recession, with so much hardship out there, it nonetheless remains possible to successfully fundraise, if you align your “asks” to current donor concerns. Reach out to your donors regularly, with empathy and concern for their welfare, and messages that are about them, not just you. Some will be overwhelmed with work and home responsibilities, while others may truly want interaction and connection (digitally, of course). “Keep telling your story, making your case, and asking for gifts,” but refocus on building engagement and relationships for the long term. Share information, resources, or diversions of interest. Consider a virtual gala, or independent running race (like uMichigan’s “Hail to the Frontline Virtual 5K”). Focus on immediate research or student support needs, “be merciful and get to the point,” and of course, “thank your donors early and often.”  Peterson Rudgers

An August survey of 225 higher ed advancement leaders found that two-thirds face budget decreases of 10-20%, and expect to have fewer staff – while goals are the same or even higher. Naturally, the shift is to digital donor engagement, digital advertising, texting and analytics. Contact methods will be more immediate, and messages will be too, with a focus on student supports, and the need to upgrade systems to pivot to digital delivery. Some are planning crowdfunding, phonathons, video and texting approaches. “We need to frame educational impact as urgent and compelling.”  Ruffalo Noel-Levitz

Some of the world’s wealthiest individuals have stepped up in the pandemic: over 10% donated to COVID19 causes in the first 5 months of 2020, and have contributed in kind as well. But these philanthropists are different from most billionaire donors in the past 5 years: they are younger, wealthier, and more likely to be self-made. This may have implications for higher ed’s traditional emphasis on cultivating older donors, which has only been growing over the past decade – and create new opportunities for fundraisers who pitch big, transformative ideas. Also, “self-made, rather than inherited, wealth brings with it a ‘heavy involvement’ mindset that few development teams are equipped to handle… Transactional philanthropy is a non-starter.” EAB 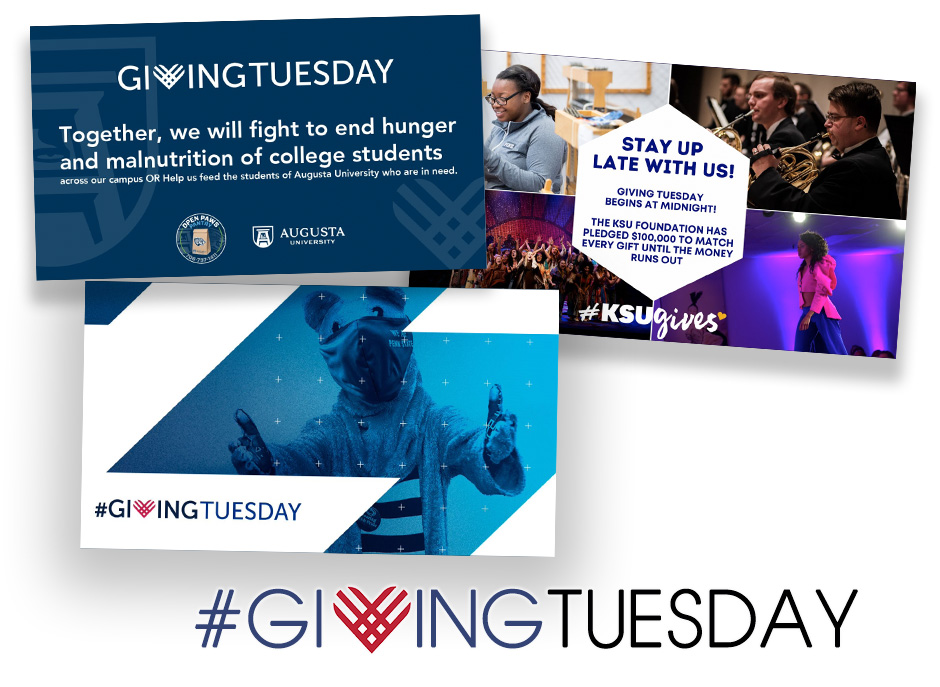 After the indulgent consumption of US Thanksgiving, Black Friday, and Cyber Monday comes a more selfless Giving Tuesday, and in 2020 many institutions hope donor generosity will be magnified by pandemic kindness…

New York’s 92nd Street YMCA and the United Nations Foundation launched the first Giving Tuesday in 2012, “with the hope that after several days of big sales and rampant consumption, there’d be interest in giving back.” The hashtag went viral and $10M was raised the first year. The movement steadily gained momentum internationally, and in 2019 Giving Tuesday became an independent organization, and the day raised $511M in online giving. According to one survey, 54% of consumers have heard of the day. For the past few years, Facebook has offered to match millions of dollars in donations – and they hit the limit within seconds each time.  Vox

Of the thousands of higher ed Giving Tuesday appeals I have noticed this week, most focus on the immediate needs of students…

9 Nova Scotia universities, “in an unprecedented move,” have combined their efforts today to improve food security for students. The J&W Murphy Foundation has pledged to match funds raised, starting with a minimum donation of $3,500 to each university. Studies suggest that as much as 39% of Canadian university students have experienced some degree of food insecurity, and COVID19 has exacerbated the issue.  MSVU

Vancouver Island U’s 7th annual Giving Tuesday campaign began Nov 16, and targets supports for students “impacted financially and mentally by COVID19.” Since March, VIU has supported >1,300 students with emergency funds, allowing them “to buy groceries that month… to stay in their rental housing or… to buy the technology resources they needed to finish their semesters remotely.” Giving Tuesday will raise funds for the newly-created VIU Mental Health Fund, which supports initiatives like the student-led “Talk to Me” program. The VIU Foundation and challenge donors have offered limited matching funds.  VIU

Centennial College is encouraging its community to post social media “Love Notes” to students with the hashtags #CentennialGives, #TorontoGives, or #GivingTuesdayCa, to “flood social media with messages of hope and inspiration for our students, and show them we’re here and we care, through kind words and kinder deeds.” Those deeds, of course, include donating to the Student Emergency Fund, to help students with food and housing needs. (All donations will be matched by the College, up to $25,000.) Centennial

The Gift of Mental Health

Brock U is asking its community to support mental health and wellness resources for students. “With student mental health issues affecting 49.9% of the Brock student population, the need for increased access to mental health supports has never been greater.” Two anonymous donors have pledged to match any new donations of $100+, up to $50,000.  Brock

You may recall that I shared a uVic Cookie Recipe video on Friday that remains a clever example of a light-hearted advancement appeal. Here are a few other recent examples…

uCalgary celebrated the successful completion of its $1.3B campaign this June with a polished 2:30 min video. “Powered by Research. Energized by You.”  YouTube

uSherbrooke released this 1-min video for National Philanthropy Day (Nov 15) to thank donors. It does a nice job putting us right there, in the moments when our support has impacted student athletes, researchers, and others.  YouTube

Stated: Your Purpose, Your Impact

Colorado State U released this impressive 6-min video in August, at the conclusion of its $1B fundraising campaign, “State Your Purpose.” It includes some glorious cinematography, inspiring moments, and brief interviews with passionate and talented student scholarship recipients and researchers. (And even some cute animals!)  YouTube

Thanks for reading, and for all you do to advance the missions of higher ed institutions around the world.  I wish you a successful #GivingTuesday – stay safe and be well!