My participation on eCampus Ontario’s Virtual Learning Advisory Committee, and the province’s new $50M Virtual Learning Strategy competition, has me reflecting on the promise – and particularly the pitfalls – of online learning.

I’m going to start with the latter, in case they’re being overlooked…

A Virtual Moment of Truth

Obviously, 2020 has seen virtually every student and teacher worldwide, primary secondary and tertiary, pivot to remote delivery using Zoom or other teleconferencing platforms. After years of Silicon Valley types asserting that MOOCs represented the future of higher ed (if not the death of universities), and governments hoping that somehow online delivery could bring down escalating costs of providing education, this year has been a moment of truth in many ways.

In 2020, administrators and managers discovered that WFH was far more feasible than they ever expected, for many employees, and some will never return to campus. Technophobic faculty and instructors had no choice but to wade into remote teaching, and I’m sure some of them have overcome their reluctance and become at least grudgingly adept at using the campus LMS and even interacting with students on Zoom. Gen Z students have discovered that in fact they are not such “digital natives” as they liked to think, and have a new appreciation for the in-person classroom interactions, campus life and work experiences most of them lost this year.

And as a sector and a society, we all have developed a fresh appreciation for the inequities that can obstruct access to education, or academic success once enrolled.

Don’t Get Me Wrong

Now, don’t get me wrong: I am hugely enthusiastic about the immense potential of intellectual activity mediated by digital technologies of all sorts. I have been a fan of computers and an early adopter since I started writing simple text-based games on a Commodore PET back in the 1970s. I worked at uToronto’s Centre for Computing in the Humanities during my doctoral work, and started an online Shakespeare listserv that survives to this day. I jumped into Second Life back in 2004, even though I had to upgrade all my equipment just to spend a frustrating day or two there. And (as I have said many times) I’m a lifelong Star Trek fan, so I can certainly imagine holodecks as the ultimate VR – in about 400 years.

Many learners and instructors will benefit from the incredible freedom virtual learning can provide to overcome geographic and chronological limitations, personalize a course of study with adaptive learning and gamified platforms, gain simulated lab or work experience in AR and VR environments, and even extend their intellectual community and collaborations across continents and across linguistic divides. Emerging AI tools will be able to provide students in any time zone 24/7 personalized attention, accelerate genetic analysis and scientific research, and leverage “big data” from student interactions with texts, libraries, and LMSes to proactively encourage their success.

(#ICYMI, I published a 14-min episode of Ten with Ken on “Evolving Classrooms & Technology” that tried to capture some of that enthusiasm.)

But although many students and faculty members share my love of technology and independent scholarly work, I understand full well that virtual work and study is decidedly not for everyone. And this year, the emergency pivot to remote instruction has made the shortcomings of online learning obvious.

On CdnPSE campuses, most of us are spoiled rotten with broadband or even internet backbone connectivity. Even at home, I’m spoiled with 2-gigabit service across 3 redundant pipes. But many less fortunate have no connectivity at all, or service so slow it might as well be nonexistent…

Out on a Limb

F0r me, this image powerfully expresses the challenge some disadvantaged students face in accessing online learning: Alexei Dudoladov, a 21-year-old student in a remote Siberian village, has to climb an 8-meter birch tree in winter to find a cellular signal that will allow him to attend his classes online. His plea went viral on TikTok, naturally. National Post

Australia has emerged from “the greatest unplanned experiment in education methods our nation has ever endured,” and teachers report widespread concern with disadvantaged students. Some lacked devices or internet connectivity, quiet study spaces, or even a safe haven from an abusive home. Schools in disadvantaged communities were more likely to provide hard-copy materials to students, and teachers there felt 4x less confident with basic technology.  The Age

“The notion that technology is incompatible with learning is dead. Can you believe it was less than a year ago we were banning devices from the classroom? In one year we’ve leapt forward a decade in our acceptance of technology in education.” – Melodie Potts Rosevear, CEO, Teach for Australia

The CRTC recommends that every Canadian household have at least a 50 mbps – and while the median speed in urban regions is ~64 mbps, in rural areas the median is ~6 mbps. In BC’s Chawathil First Nation, the band office maxes out at a measly 1 mbps – and the service costs $130/month. Some residents take a 35-min bus ride to Chilliwack, where they can access wifi at a coffee shop. The federal government’s 2019 budget committed $1.7B to improve rural/remote internet infrastructure, including via satellites.  CBC

The FCC reports that 21M Americans don’t have access to quality broadband internet, but some estimates suggest the number is actually double that. In many regions the infrastructure is lacking, but in others the average $60/month cost is prohibitive for many households. For kids studying online, for workers displaced from the office, patients in need of telehealth, even taxpayers accessing government services, internet connectivity has gone from a luxury to a fundamental human right. Public libraries are attempting to create neighbourhood hotspots, cable companies are accused of “digital redlining” to discriminate against low-income communities. Unlike most utilities that require immense national infrastructure, internet has been surrendered to private sector monopolies. “The market simply will not provide the level of broadband access that democracy requires.” Like the US Mail, there is a powerful argument that fibre broadband ought to be nationalized.  Vox

“Broadband is absolutely essential in the ability of people to be able to participate in society, in democracy, and in the economy. We have a digital divide that we’ve talked about for years, but the threat of this crisis is that it becomes a digital chasm.” – Jon Sallet, Senior Fellow, Benton Institute for Broadband & Society

Even when learners have broadband access, online learning further disadvantages the disadvantaged… 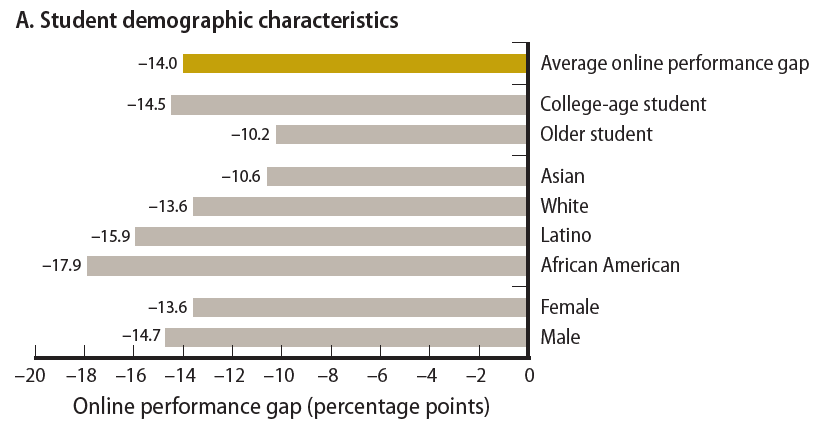 A study of >1M California community college students enrolled in online courses in 2012 found that overall, just 60% passed online vs 70% in F2F classes. Controlling for variables, that’s a 14% learning penalty – but it rises to 18% for Black students, while it drops to just 10% for older learners, and Asian students. For a range of reasons, online learning is tougher for students in applied programs, younger students, and students from disadvantaged backgrounds. (There’s a reason that online graduate programs, and executive MBAs, have been among the most successful to pivot online.)  Public Policy Institute of California

Around the world, community colleges and trade schools have seen greater enrolment declines than have universities, for several reasons. Hands-on programs are tougher to pivot online, but students in these institutions are also more likely to come from lower-income households (at least, outside of Europe). Just as the COVID19 pandemic has emphasized class inequalities between white-collar knowledge workers and frontline “essential” workers, the same may be playing out in higher ed. The OECD observed in May that vocational training was being “uniquely impacted” by the crisis.  Times Higher Ed

A research team from uUtrecht has completed a meta-analysis of 114 studies on “flipped classrooms,” in which lectures are pre-recorded and class time is spent engaged in active learning – and the results are underwhelming. “It could be better, but only when it is appropriately designed.” Researchers calculate that on average, flipped classrooms in secondary and PSE classrooms resulted in a 6.5% improvement in achievement on a standardized math test. Moreover, when F2F instructional time was reduced, students learned less: synchronous interaction with other students and the instructor seems to be fundamental to successful learning. Extra quizzes helped ensure students kept up with the recorded lectures, and reinforced their learning.  The Hechinger Report

Canadian high school student grades seem to have dropped with the shift to remote delivery and compressed terms this year (although admittedly economic and psychological impacts of the pandemic are also contributing). The York Region DSB reports that “more students have credits at risk.” The Hamilton-Wentworth DSB found that course failures at mid-term were 16% – almost double 2019. (Final exams have been cancelled, and teachers are focusing on “credit rescue activities” instead.) Quebec’s provincial association of principals says 3x as many students have failing marks across primary and secondary grades (30% instead of 10%). High school students are not nearly as independent at learning as some would like to believe.  Globe & Mail

“We count the COVID19 numbers in days. We count educational harm in years.” Kelly Gallagher-Mackay, Asst Prof, Wilfrid Laurier U

Some anecdotal reports suggest that some differently-abled students, who are normally disadvantaged in a F2F classroom, are much preferring their learning experience during the pandemic…

The Joys of Digital Learning

Online classes that reduce contact hours with instructors and social interaction among students seem to negatively impact learning outcomes – but not for all students. “A growing contingent of students” actuallyprefer their “cyberspace syllabus,” including introverts with social anxiety, some students with ADHD or on the autism spectrum, or some with learning disabilities that require accommodations. Self-paced learning from the safety of home can actually boost academic achievement for some of these students, provided that the home environment is conducive.  Vox

Fleming College reported a new case of COVID19 on Sunday, at its Sutherland Campus in Peterborough. (Total: 4 cases this fall.)  Global

Ontario’s Windsor-Essex region moved into the “Grey” or “Lockdown” position yesterday, but students at St Clair College and uWindsor are writing exams this week, so adjustments were subtle. St Clair students with hands-on exams were socially distanced with no more than 9 students per room, and exams were scheduled throughout the day and evening. uWindsor exams were “all” virtual anyway, but research areas had to adjust capacity. Campus study spaces and fitness facilities have been closed. In-person classes for the Winter 2021 term will be limited to 10 people.  Windsor Star

BCIT announced Friday that blended and remote delivery will continue through spring and summer 2021, until at least Jun 30.  BCIT

Mea Culpa: Yesterday I cited a story from the Abbotsford News that claimed (remarkably) that U Fraser Valley saw spending on salaries and benefits rise by 45% between 2018 and 2020. I probably should have said “incredibly,” because it strained credulity, and when I get that nagging doubt (even at 3am) I should double-check before running the story. Instead, UFV reached out to me with the correct information: the increase was a much more believable 17%, “due to a combination of general wage increases, retroactive payments and accruals for anticipated costs of negotiated general wage increase, and PSEC approved salary increases.” My apologies for magnifying the local reporter’s error!

Thanks for reading.  Be safe and stay well!