“A Stalemate Between Fatalism and Hope”

Good morning, and happy Monday! (Some of you may already be enjoying your winter break, but if you’re reading this, your mind is at least a little bit on work.)

Spoiler alert: it’s Monday, time for my weekly round-up of bad news. I want to get it all out of the way today (if I can) so that we can finish out this week, and this year, with more upbeat stuff!  (This newsletter and I will be taking a break – and giving you one too – from Dec 21-Jan 8.)

So our focus today will be on pandemic trends, vaccine progress and setbacks, and budget cuts and layoffs. On the upside, there are 2 more Ontario universities offering compassionate grading options to their students…

Worldwide, 72.2M cases of COVID19 have been recorded since the pandemic began, and 1.6M deaths. Canada has now surpassed 460,000 cases, and the country is on track to see almost 15,000 deaths by Christmas. Ontario ICU beds are already full in lockdown areas, and PHO zones are continuing to climb into orange and red. Alberta hospitals, already operating at or above capacity in Edmonton and Calgary, brace for worse over the next month as they wait for new restrictions to have an effect. Manitoba’s hospitalization rate per capita is the worst in Canada. 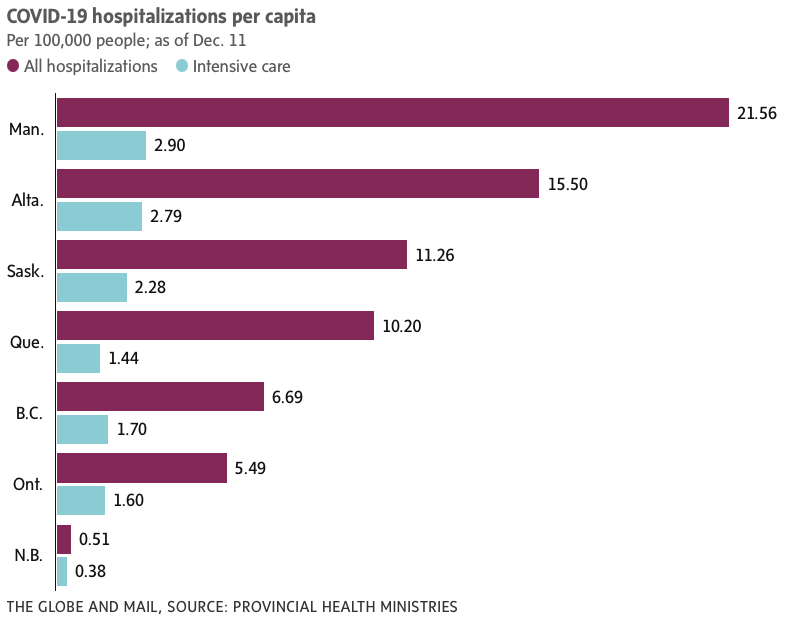 “We are hanging on by our fingernails.” – Rebeccah Rosenblum, Emergency department doctor, Royal Alexandra Hospital, Edmonton

In Europe, Italy is experiencing record-breaking deaths which some experts blame on a reluctance to impose restrictions this fall, and a failure to reinforce its healthcare system during the summer.

“If you can act sooner, even a bit lighter in the measures, they work better than acting harshly a bit later or too late.” – Matteo Villa, Research Fellow, Institute for International Political Studies, Milan

American Thanksgiving was just over 2 weeks ago, so right on schedule COVID19 case counts, hospitalizations and deaths have been skyrocketing. The US has just surpassed 300,000 COVID19 deaths – “nearly 1 of every 1,000 Americans” – and the CDC warns it may see the equivalent of a 9/11 per day for months. The current record is just over 3,300 deaths per day, and 108,000 Americans are in hospital.

“Probably for the next 60 to 90 days, we’re going to have more deaths per day than we had at 9/11 or we had at Pearl Harbor.” Robert Redfield, Director, US CDC

California has been setting new records for COVID19 deaths this week, and they are not expected to peak until Feb 18. The state had 12,477 patients hospitalized with COVID19 as of Thursday.

The first Pfizer-BioNTech shipment arrived in Canada last night, and an initial 30,000 doses will gradually roll out to 14 distribution centres across the country. With the FDA’s approval on Friday night, the first US shipments of the Pfizer vaccine started rolling out of the plant in Kalamazoo MI on Saturday. UPS and FedEx will be the primary distributors (as if they didn’t already have enough to do this month) and shipments will be constantly tracked by GPS, temperature monitored, and closely guarded by law enforcement. 2.9M vaccinations will begin at 636 sites across the nation by Wednesday. Other vaccines from Moderna, AstraZeneca, and Janssen are already under “rolling review” with Health Canada.

“This is a game changer. Not to dramatize the situation we’re in, but we’re at war with this virus. And the vaccine is the beginning of the end.” – General Gustave Perna, COO for Operation Warp Speed

GlaxoSmithKline and Sanofi reported Friday that their COVID19 vaccines produced an insufficient immune response in older adults, and therefore will need refinement and will not be available until late 2021. Also Friday, researchers at uQueensland and Australian pharma company CSL said they were abandoning their COVID19 vaccine because it triggered false positive tests for HIV. It might have been possible to re-engineer, but would set back development 12 months or more.  Global

Peru has suspended trials of China’s Sinopharm COVID19 vaccine because of a “serious adverse event” with one of the 12,000 volunteers. He reportedly experienced “decreased strength in his legs” among other symptoms.  National Post

9 Things that Could Go Wrong

A clinical research and epidemiologist warns that we must temper our enthusiasm for the vaccine, with the knowledge that much could still go wrong. Almost certainly, anti-vaxxers will spread misinformation and fuel vaccine hesitancy. Others will get a false sense of security and start neglecting health precautions. The disadvantaged, without access to a family doctor, may be left behind when it comes to vaccination. Some people won’t get their second dose, which could actually help the vaccine evolve to resist the vaccine. There might be shortages of the vaccine, or more likely of vials, needles, swabs or dry ice. Worst case, although remote, would be the possibility of unexpected long-term side effects surfacing years after immunization.  Vox

US college athletics alone has been hit with >6,600 cases of COVID19 – in fact, that is based on numbers from little more than half the elite NCAA schools.

Since Friday, CdnPSE has added at least 8 more confirmed cases of COVID19…

Algonquin College reported a COVID19 outbreak on its Pembroke campus last week, where 3 staff members tested positive. Then Sunday, they added that a student has tested positive at the same campus. The PHO reported that “all staff and students within this cohort were previously deemed high-risk contacts and had already been given direction to self-isolate and get tested.”  CTV  |  AC  |  RCDHU

uWaterloo reports an outbreak in its Claudette Millar Hall residence, as another student has tested positive, and was found to have been a close contact of a previously-reported case.  UW

Western U’s University Hospital (I need a shorthand for this, don’t I?) that its outbreak spread to a 9th unit, and added another death. (So far, the outbreak has infected at least 153 and killed 15.)  London Free Press

In response to the financial, enrolment and operational impacts of the COVID19 pandemic, CdnPSE continues to announce efforts to streamline and reduce staff…

uAlberta’s Board of Governors approved the academic restructuring plans recommended by Senate, which I reported last Wednesday. 13 faculties are being integrated into 3 colleges. “This week, we witnessed our community making challenging decisions with respect and collegiality.”  UA

uAlberta is planning to cut 650 jobs by 2022 to address a $127M shortfall, on top of ~400 jobs already cut in 2019-20 through layoffs, attrition and retirements. UofA’s 2 unions are reportedly concerned about “the rapid speed at which decisions are being made.” Edmonton Journal

Fraser Valley is reportedly offering a retirement incentive program in order to avoid layoffs and balance its budget. UFV expects 30-40 people may apply. Between 2018 and 2020, media reports that UFV’s spending on salaries and benefits increased by a remarkable 45%.  Abbotsford News

uLethbridge announced 13 permanent layoffs this week due to lack of work because of COVID19. 12 are caretakers, and 1 is an administrative support person.  Lethbridge News Now

The situation looks even more bleak to our South…

This Fall in Australia

Australian National U (Canberra) is reported seeking 215 redundancies, in addition to 250 already negotiated. Monash U is seeking 277 voluntary redundancies. UNSW Sydney intends to cut ~500 jobs, and more than half will be forced redundancies. RMIT U (Melbourne) rejected media reports in September that it was considering 1,200 job cuts, indicating the target is more like 250. But that is on top of 355 voluntary redundancies just completed, and doesn’t count casual positions. The National Tertiary Education Union estimates >11,000 permanent jobs will be eliminated, not counting casual and term employees.  Times Higher Ed

MacQuarie U announced last week that they have saved $13.5M through voluntary redundancies this year, but now need to cut another $25.1M in academic salaries across 4 faculties in particular (Arts, Science/Engineering, Medicine/Health/Human Services, and Business). Faculty committees will assess their peers on recent performance, and individuals will be allowed a 2-page defence but not an interview. Professional staff exits previously cut $25M, and the university warns it may need to cut another $38.3M in 2022.  Campus Morning Mail

uDelaware announced in September it was facing a $250M deficit, and would pursue a voluntary retirement incentive program, scaled back hours, unpaid leave and temporary reductions to retirement contributions – “for all staff” but not faculty.  US News

The American Council of Education estimated in September that the pandemic’s impact on US colleges, in lost revenues and new costs, would “substantially exceed $120 billion,” as it wrote to Congress requesting financial relief (which so far has not been forthcoming). uMaryland in particular was looking to cut $292M from its budget. Forbes

Non-profit public and private institutions in the US shed ~337,000 jobs between February and August – and the financial impacts of declining enrolments at community colleges, and declining first-year international students, may make the 2020-21 fiscal year ever tougher. Ithaca College (NY) is already planning to cut nearly one-quarter of its faculty. The Penn State system plans to cut ~350 faculty positions.  Chronicle

“We can’t delay. That would be kicking the can down the road, and we’re not going to kick the can anymore.” – LaJerne Cornish, Provost, Ithaca College

Laurentian U Senate approved a pass/fail grading option, proposed by the students’ association, to provide “compassionate and equitable outcomes” for students. CBC

Wilfrid Laurier U’s Senate has approved a student proposal to give undergrad and grad students the option to convert one half-credit course to “Credit” for the Fall 2020 term. The Senate Academic Planning Committee is also drafting “a permanent policy on a CR grade option, to take effect as of Winter Term 2021.”  WLU

On Friday, Ontario’s MCU announced that eCampus Ontario will be administering a new $50M Virtual Learning Strategy funding competition early in the new year. Ontario PSE institutions are invited to submit EOIs for initiatives to enhance digital content, capacity, fluency and delivery in ways that are learner-driven, collaborative, and will advance “digital by design” PSE across the province. (Briefings start this Wednesday, if you’re at all interested in submitting.)

Full disclosure: I’m serving on the Virtual Learning Advisory Committee for this program, and looking forward to seeing some innovative ideas! But rest assured, I am not an uncritical booster of online learning for all. If this year has taught us anything, it should be to appreciate the unique strengths and affordances of face-to-face learning opportunities, as well as the potential (and pitfalls) of virtual delivery. I’ll tackle some of those in tomorrow’s Insider…

Thanks for reading, and I hope your week gets off to a great start!