Light at the End of the Pandemic Tunnel

It’s Thursday, so time for my twice-weekly roundup of the big picture for the COVID19 pandemic. There have been a few developments this week that have been burning a hole in my proverbial editorial pocket…

I mentioned on Monday that I will try to limit that global overview to Mondays and Thursdays, so that things don’t get too far out of date, but also so that I can focus some attention elsewhere. Especially on Fridays, when we want to be in a lighter mood for the weekend, right? (Let me know if you think the approach is an improvement.)

Things look dire in the US, France, and much of Canada right now – and are likely to get worse before they get better. I’ve spent some time updating my CdnPSE spreadsheet to include 688 cases of COVID19 so far this fall. (Although that vastly understates the total, I am sure.)

But of course, the light at the end of the tunnel is that we now have 2 vaccines nearing the clinical trial finish line… 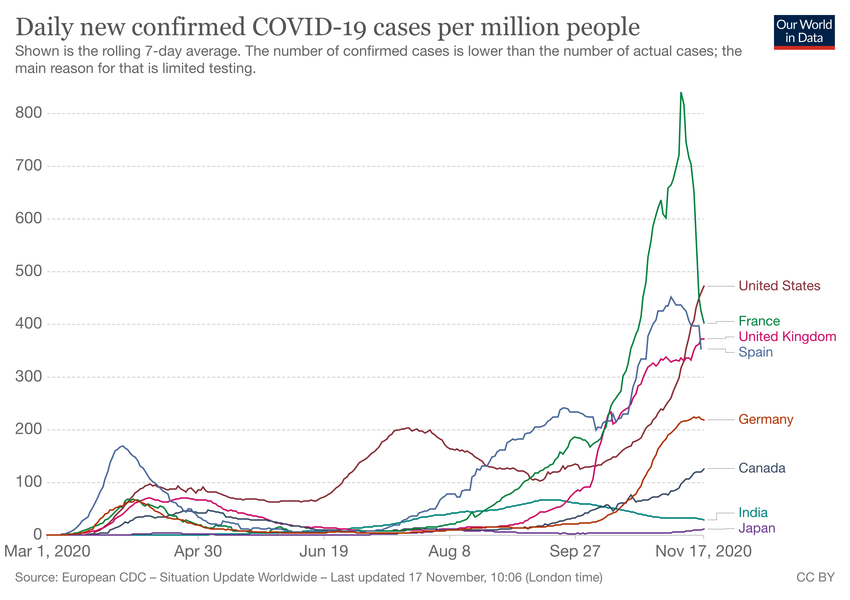 India has >8.9M cases, second only to the US, but the pace of new infections appears to be slowing. (Diwali, celebrated last weekend, could change things in the next few weeks.)

France has passed 2M cases, and has been in a second lockdown since late October. New cases have dropped substantially as a result, but hospitalizations have reached an all-time high.

South Australia is grappling with a new outbreak, and with just 22 cases has imposed a strict 6-day statewide lockdown as of midnight last night. (All schools, universities, restaurants and pubs will be closed.) A hotel cleaner acquired COVID19 from a traveller who returned from the UK and was in quarantine.

COVID in the USA

The US surpassed a quarter-million COVID19 deaths­­­ yesterday morning, and that number may double before a vaccine becomes widely available. North Dakota now has the highest mortality rate in the world, and South Dakota comes in third. (Both have the lowest use of face masks in the US, and you may recall the Sturgis Motorcycle Rally debacle there.) In contrast, Michigan has shut down dining, gyms, schools and colleges for 3 weeks. (To which Trump’s COVID19 advisor, Scott Atlas, urged people in Michigan to “rise up” against restrictions.) Governors in NJ, CA, IA and OH implemented restrictions this week on gatherings, and encouraging face coverings.

“We are in the worst moment of this pandemic to date. The situation has never been more dire. We are at the precipice and we need to take some action.” – Gretchen Whitmer, Governor of Michigan

Over the past week, the US has averaged 158,000 new cases a day, and daily hospitalizations are also hitting record numbers (76,830 on Tuesday) – so expect the death toll to continue to rise over the weeks ahead. An estimated 3.6M Americans are currently contagious, based on a model by a Columbia U epidemiologist. An eventual death toll of 2,000 per day is “essentially baked in.”

With (US) Thanksgiving next week, things will be catastrophic long before Christmas. Not to mention the paralysis of the White House coronavirus task force, the roadblocks to presidential transition, and the potential of a mid-December shutdown of the federal government. As the Washington Post says, “Trump is engaging in US history’s deadliest-ever sulk.”

“When you have a fire, you send the firetruck. You don’t wait and say, ‘Okay, let me wait a little bit, maybe that fire isn’t going to spread that much.’ We already moved into exponential growth. Just hit the brakes as soon as you can.” – Ali Mokdad, Epidemiologist, uWashington

I said on Monday that it wasn’t a good sign that the US was looking to Canada as a cautionary tale for how notto handle Thanksgiving. Now, Anthony Fauci is warning that Canada is “getting into trouble.” The prospect of #COVIDzero seems out of reach now.

“Canada, which was supposedly doing so well, is also getting into trouble. There’s a lot of community spread… [The vaccine should be] an incentive to double down even more with the classical and simple public health measures.” – Anthony Fauci, White House Coronavirus Task Force

Quebec seems to think its second wave is levelling off. Despite >3,000 cases of COVID19 in classes and 1,200 of them closed, Quebec’s teachers’ unions and prominent parent groups are opposed to closing schools or extending the winter break. (>27% of active outbreaks in Quebec are tied to educational institutions.) On the other hand, students at Polytechnique Montreal are protesting the school’s plan to hold in-person exams next month – right up until Dec 23, which they say poses an unacceptable risk to holiday gatherings with older relatives.

Ontario is reporting record daily deaths from the pandemic, and premier Doug Ford warns that Toronto, Peel and York regions are “staring down the barrel of another lockdown.” For the third day in a row, Ford insisted he “won’t hesitate” to issue lockdowns. (Um…) New restrictions for the GTA are expected tomorrow.

Manitoba continues to face the highest per-capita infection rate in Canada. Indoor service at bars and restaurants was banned last week, and the maximum size of gatherings capped at 5. The province has just instituted a new $298 fine for anyone not wearing a mask in indoor public places, and is considering closing more stores and reducing the limit on gatherings even further. A private security firm will augment police and other authorities who can issue fines and lay charges.

Starting today, masks are mandatory indoors across Saskatchewan, and home gatherings are limited to no more than 5. The opposition is calling for a shutdown of non-essential businesses in the province, such as bars, gyms, and bingo halls, and for restaurant dining rooms to be closed.

Alberta reported 730 new COVID19 cases and 11 deaths on Tuesday. 432 Albertans have died, including an Edmonton man in his 30s. 40% have contracted COVID19 in households and private parties – and 75% “from an unknown source.” Despite restrictions imposed last week on group fitness activities, and curfews on restaurants and bars, the PHO reports that some are “finding loopholes.” Calgary’s emergency management chief urges a “short, sharp break” to get the virus under control. Premier Jason Kenney is resisting, however: “We’re not going to enforce our way out of this, we’re not going to turn Alberta into a police state.” (Sigh…)

BC is continuing to set new records for COVID19 cases, and its premier is urging national restrictions on non-essential travel ahead of the Christmas holiday season. He has already banned non-essential travel in the Lower Mainland, and PHO Bonnie Henry is expected to announce more restrictions today. (Ironically, Tourism Vancouver Island had just launched a national campaign to attract Canadian “snowbirds” this winter. They have suspended the media buy.)

Nunavut reported its first case of COVID19 just 2 weeks ago, and now reports 70, pushing the territory close to the limits of its healthcare system. Earlier this week, with just 18 cases, the Premier has ordered a 2-week shutdown of nonessential businesses and schools.

Light at the End of the Tunnel

In the past 2 weeks, one of the biggest uncertainties about the pandemic has been resolved: apparently, a vaccine can prove effective at stopping the novel coronavirus. As The Atlantic declares, “the end of the pandemic is now in sight.” Even more than that, two separate labs have independently demonstrated that mRNA technology works, holding out the promise of rapid responses to some future pandemics as well. Of course, we’re still dealing with early data that hasn’t been peer reviewed or confirmed, and while we have 2 months of safety data, we don’t have a year or two of data about the duration of immunity.

Pfizer and BioNTech announced their vaccine was >90% effective on Nov 9, based on preliminary data. Hourslater, Pfizer CEO Albert Boula sold 62% of his stock, in a pre-scheduled sale worth $5.6M. (Before the announcement, his stock was worth about $1M less.) Then of course, the other 11 COVID19 vaccines in late-stage testing felt the pressure to play catchup. So the next day, Russia announced its vaccine was 92.5% effective. Exactly one week after Pfizer, this Monday, Moderna announced its vaccine was 94.5% effective. Then on Wednesday (2 days later), Pfizer declared its vaccine is in fact 95% effective, and ready to apply for FDA emergency use authorization.

You don’t have to be a conspiracy theorist to be suspicious of the timing, or the way each announcement was a percent or two better than the last.

Public health experts warn that it will likely take a year or more to distribute enough doses for the US (480M doses) and the rest of the world (11.7B) to achieve herd immunity. Pfizer’s vaccine needs to be stored at -80°C, posing a massive challenge for distribution logistics. (Moderna’s stays stable at -20°C.)

Although Canada will need to compete with others for vaccines once they are available, we lead the world in pre-orders per capita: Canada has committed up to $440M to purchase 9.52 doses per person in this country. (Since only 2 doses will be required, this is obviously overkill: hedging our bets against vaccines that don’t pan out. Many critics accuse us of “hoarding.”)

“We’re looking at least the first half of next year as being a period with very, very limited doses. Supplies are going to be limited. There are bilateral deals that many of the companies have done. So many of the doses have already been booked by some countries.” – Soumya Swaminathan, Chief Scientist, World Health Organization

“Until everyone on the planet is safe from COVID-19, no one is.” – Karina Gould, Minister for International Development, Canada

On Tuesday, the US FDA gave emergency use authorization to Lucira Health for the first at-home COVID19 test that uses a nasal swab and provides results in just 30 minutes. It requires a prescription, though, costs $50 US, is only 94.1% as accurate as a PCR test, and has not yet been tested on asymptomatic individuals. New York Times

Most CdnPSEs seem to be suppressing information about COVID19 cases among their students. Many explicitly indicate that they are tracking only those individuals who have been on campus while contagious and have definitively tested positive. Quite a few list only active or unresolved cases on their websites. I know several are not including major outbreaks in their campus hospitals. Some appear to have been pressuring local PHOs not to mention student affiliations with their institutions in announcements. Suffice it to say, the information is challenging to gather and incomplete, to say the least.

But I’ve now added what I have to my CdnPSE spreadsheet – and amazingly, there are 688 cases that have been reported since September. (Please do let me know if you have better information for your institution!)

Since yesterday, I have 17 more cases to add…

McMaster U reports an employee recently on campus has tested positive. (13 this fall by my count.) McMaster

Nipissing U reports a member of its community has tested positive for COVID19, after using the athletic centre on Nov 13.  CBC

Red River College reports 3 more unrelated cases of COVID19, at its Notre Dame and Exchange District campuses in Winnipeg. (10 cases this fall, by my count.)  RRC

uWindsor reported another case of COVID19 on campus this morning. (10 this fall by my count.)  UW

I think the way Canada has lost control of the second wave of this pandemic will have serious repercussions on our appeal to international students over the next few years. This spring, we were being compared very favourably to New Zealand and Australia, and perceived as far safer than the US or UK. By January, if we fail to flatten the curve and our hospital ICUs are overwhelmed, the situation could be far worse.  I’ll revisit that issue in more depth in a future issue. (This one is already way too long!)