After yesterday’s issue, which was heavy with pandemic stats and depressing forecasts, I wanted to try something a little lighter today – so we’re going to focus on science fiction, a hobby of mine and closely aligned with my profession, identifying “signals from the future.”  A speculative fiction mindset can be helpful in building an inspiring vision for the future when strategic planning.

But of course, not all SF is utopian…

Colleges and universities dependent upon international students, or on-campus residential students, have been particularly hard hit by the pandemic and are downsizing significantly… 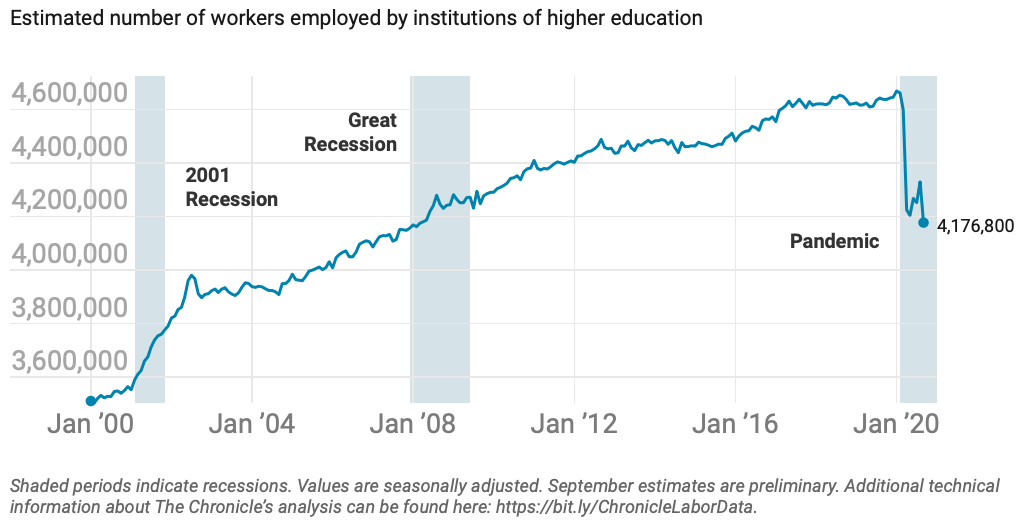 American PSE shed an estimated 152,000 jobs in a single month this fall, according to the US Bureau of Labor Statistics, and 484,000 workers since February. That is essentially 10% of the labour force, which has been literally “decimated,” particularly at public state institutions. (The stats don’t include subcontractors providing campus services.) Some degree offerings and athletics programs may have been eliminated permanently, while many employees have seen their workloads increased.  Chronicle of Higher Ed

A new Pew report calculates that public colleges and universities across the US lost 13.7% in employment this year, with losses in nearly every state. (OR, MT, NM, IA, and NY seem best off; WY, CO, OH, PA, KY and MS worst off.) Higher ed has seen steeper declines than any other sector, besides Leisure/Hospitality.  Pew Charitable Trusts

uMelbourne researchers calculate that public Australian universities have lost $3.8B in revenue this year, and in response have cut 5,600 FTE jobs. An estimated 17,500 casual and researcher jobs are also expected to disappear, “diminishing the tertiary sector’s research capacity and reducing its ability to teach the next generation of domestic students.” The losses amount to 9.5% of Australia’s entire higher ed workforce. uMelbourne is expected to lose $1B in revenue in 2020-22 and has declared 450 FTEs redundant. La Trobe U may lose up to $520M and is expected to lose up to 415 jobs. Monash U will lose about $350M this year alone, and plans 277 redundancies.  The Age

Swinburne U (Australia) says it will close or reduce programs in science, engineering, economics, and business, and cut up to 150 jobs in “merit-based” layoffs. (Atop 138 staff voluntary departures earlier this year.) Swinburne explains that the programs in question were attracting mostly international students, and since Australia’s borders were closed, those enrolments have collapsed. The government’s new tuition policy (which sets much lower tuition for STEM subjects, while also cutting its contribution) also forced the decision. The tertiary education union says cuts this year amount to 10% of Swinburne’s permanent workforce. Staff have passed a vote of no confidence in the VC.  Sydney Morning Herald

Griffith U has announced it intends to cut 299 jobs through voluntary redundancies, in response to a $100M financial hit due to declining international enrolment.  Sydney Morning Herald  (Campus Morning Mailreports that some staff whose work is being outsourced will be able to compete for it, against outside tenders. Academic units in health will be restructured, student supports will use a new model, and academic work profiles will be “rebalanced” toward greater teaching intensity.)

uSydney is reportedly seeking at least 100 voluntary redundancies – and as of Tuesday, 501 people have asked to exit!  Campus Morning Mail

If you’ve seen me present, chances are you’ve heard me explain that I am a born-and-raised Star Trek fan, and I try to hang on to that political and technological optimism about the future (which is why I dislike the darker Trek incarnations, like DS9, but loved Galaxy Quest and The Orville). Lately a number of science fiction headlines have caught my attention, when it comes to projecting future scenarios…

Climate disasters around the globe may not inspire us all to take action because of the “delusion of escape,” but storytelling may provide an antidote, argue a panel of academic leaders and SF authors. People need to be convinced that our way of life could be different, or that emerging technologies could pose unanticipated threats. “Storytelling is a crucial part of imagining the consequences of complacency, and importantly, the versions of the future that we can create.” The COVID19 pandemic functions as a dry run for global cooperation in the face of an existential threat like climate change, but our economic system doesn’t create enough ROI to encourage widespread change. Yet, much of the global economic system is just as imaginary as fiction: “we create narratives that shape priorities and sculpt realities.” We need to make better choices, now, or “we will eventually create a future empty of them.”  Slate

Between wildfires, political chaos, and the pandemic, “these are deeply strange sci-fi plot style times,” but SF can “expand the available playing field” and help us imagine a way out, or a better future. (Or a worse dystopia.) Isaac Asimov’s 1957 novel The Naked Sun depicts a society where future humans abhor physical proximity, meet only by telepresence, and have thousands of robots to do the labour. Vernor Vinge’s Hugo-award-winning 2006 novel, Rainbows End, portrays a future San Diego (in 2025) in which the Internet of Things is widespread, AR is commonplace, and remote education is taken for granted. “We need reassurance that there can be a better future, but with the caution that things might not always turn out as we hope.”  PC Magazine

Sci-Fi novelist Kim Stanley Robinson writes in the New Yorker that we have entered a new era with new ways of understanding our place in history. We are all conscious of imminent mortality, watching the statistics, and listening to the scientists. Unlike the tragic time horizon of climate change, we are motivated by the much more immediate need to flatten the curve. “At the very least, we are all freaking out together.” New Yorker

A “recovering SF writer,” Crawford Kilian, observes that “the COVID19 pandemic and the other events that have aggravated it are already far beyond the plausibility expected of a SF novel.” A time traveller looking back at the pandemic in Canada from the perspective of Jan 1 2022 might observe that Canada “loosened up too soon in the summer of 2020, and never managed to tighten back down.” He anticipates that Bonnie Henry will get promoted to an overhauled PHAC, Jagmeet Singh’s Basic Income Plan will become reality (supported in particular by Albertans), and we will have 3 effective COVID19 vaccines. Widespread cognitive decline caused by 500,000 cases in Canada will pose a major challenge to education and employers for a generation, though.  The Tyee

SF is a Mandatory Strategy

It is partially true that SF fans “are rarely surprised by anything” (although we are often disappointed). But SF can be a methodology in futurism and prototyping, all about speculation and creativity – which can also help keep teams and organizations ready for a changing world with an agile and adaptive mindset. Truly innovative organizations look to longer time horizons, and blue sky new offerings or approaches beyond financial or technical constraints. SF suspends disbelief and broadens our imagination. Less innovative incumbents tend to use strategic analysis and assume a linear, stable, predictable world. “Starting in the future and then working backwards,” SF can help us develop inspiring visions and action plans. In a VUCA world, “extrapolating the future from the past can be terribly inaccurate.” SF might be a better investment of effort than regression algorithms.  Inc

“We don’t value the planet or the future people enough in our current economic system to do justice to them or to dodge the mass extinction event.” – Kim Stanley Robinson, SF Author

Several institutions in BC and Ontario report enrolment declines, and continuing hybrid delivery approaches for the Winter term. Meanwhile, in the “Atlantic Bubble,” MUN is starting to welcome non-academic staff back to campus…

Durham College reports another unrelated case of COVID19 – a student who used the fitness facility on Nov 2. (I think that now makes 19 cases this fall.)  DC

Fleming College reports enrolment is down -30%, largely because of travel restrictions for international students. President Maureen Adamson reports the revenue loss is “in the millions.” Although some students have returned to campus, it is only about 3% of normal capacity. Fleming is offering about 70% of courses this fall, and plans to offer 80% in the winter semester.  Global

Memorial U has a new plan to start returning non-academic staff to campus, for a minimum of 2 days per week, beginning Nov 23. A full return is planned for the first half of 2021. The return will “lead to greater support for students and a gradual increase in services.”  CBC

St Clair College announced Monday that it will continue with primarily online course delivery through the Winter 2021 semester. Most online delivery will be moving to synchronous “real time” delivery, “based on feedback from our students and staff.”  St Clair

Selkirk College reports that COVID19’s impact on enrolment is “less than expected”: final student headcount is down -9% for domestic and -27% for international students, compared to last year. In some cases, such as programs in trades, student demand is unchanged but social distancing requirements have reduced classroom capacity. Winter 2021 delivery will continue to be “in-person where possible and online where required,” although “planning for a steady increase in on-campus activity continues,” depending on PHO rules. Currently ~35% of overall program delivery is being conducted F2F.  Selkirk

Thompson Rivers U reports “better than expected” enrolment this fall, cutting its projected deficit from $9M to just $3M, which it will cover from reserves. International enrolment dropped -13% from last year, and domestic enrolment -1% – while Open Learning enrolment rose +4.6%. Although 120 layoff notices went out this spring, just 25 employees were permanently laid off, while about 30 others took leaves of absence, early retirement, or are working reduced hours. About a dozen administrative positions were also eliminated. TRU is also leaving about 200 positions vacant.  Kamloops this Week

What Do You Want to Change?

OK, it’s not exactly SF, but this 30-sec spot from uLeicester is fast-paced, engaging, altruistic, series of student sound bites describing how they would like to create a more utopian world. Shot in stark B&W, it’s worth checking out. (And frankly so is the 1-min behind-the-scenes vid, which explains the goal was to capture honest, unexpected, and passionate responses to the question.)  YouTube

Thanks for reading, and have a great weekend!  Stay safe and be well,