Good morning – and Happy Thanksgiving, to my American readers (who are nonetheless reading their emails)!

It’s Thursday, so time for a pandemic update (I’ll stick to the most important stuff). There’s also a theme of sorts emerging from some recent stories about students under pressure (and under guard) in residences, acting out in unhealthy ways – and more generally petitioning for compassionate grading options or holiday schedules.

There’s a way in which COVID19 has brought the matter of kindness to the forefront, whether in workplaces, classrooms, communities or politics. And clearly we’re not done with it just yet…

“Be easy on yourself. Forgive yourself if you make a mistake… Give yourself permission for it not to be perfect.” – Santa Ono, President & Vice-Chancellor, UBC 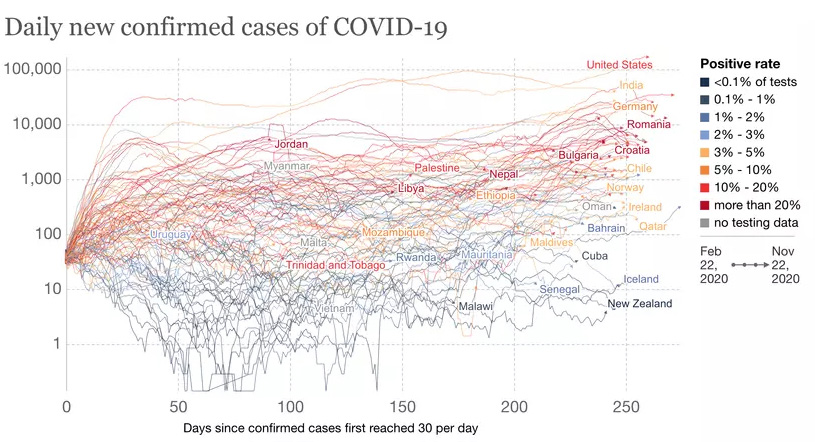 I hate to jinx it by repeating preliminary good news, but the WHO says the COVID19 pandemic has “slowed down in the past week” (for new infections, but not deaths). Lockdowns in Europe appear to be having an impact, although infections in Japan and parts of North America continue to set new records. Singapore is almost virus-free, and Australia is gradually getting back to normal again. England’s lockdown will lift next week, and France will begin easing restrictions this weekend, but restaurants won’t reopen until Jan 20. Hong Kong is trying to encourage testing by offering a $650 payment to residents who test positive.

“The exponential growth of infection numbers has been stopped, the steep curve has been turned into a flattened curve – but we cannot be content with this partial success.” – Angela Merkel, Chancellor of Germany 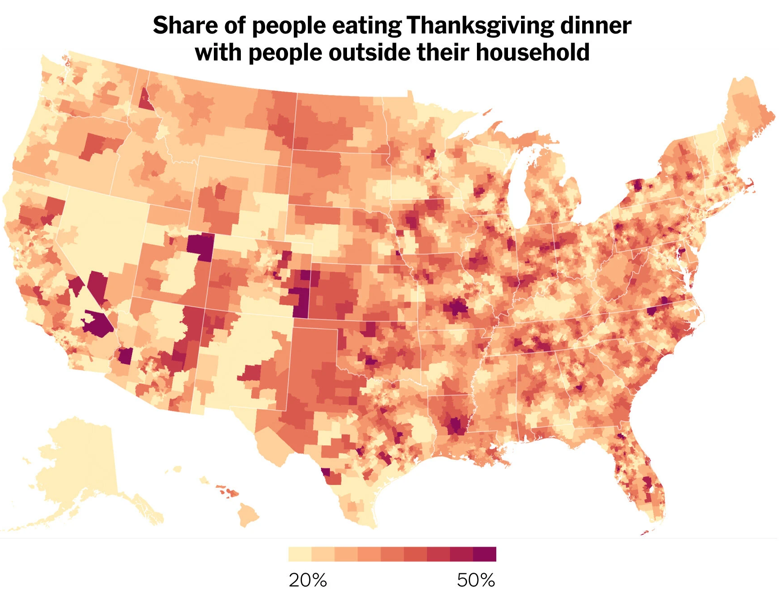 Millions of Americans have travelled this week for Thanksgiving gatherings, despite a “coast-to-coast disaster” of skyrocketing deaths, hospitalizations and infections. (New projections suggest >20M cases by the end of January.) Overall just 21% planned to travel, but that ranged from 9% in parts of Nevada, to >60% in parts of North Carolina. A $50M national ad campaign will attempt to persuade skeptics to overcome vaccine hesitancy.

Across Canada, COVID19 infections, hospitalizations and deaths are rising in most jurisdictions. The government responses to those facts, however, vary widely. With just 16 new cases, Nova Scotia shut down indoor dining at bars and restaurants yesterday. Quebec tightened up its “moral contract” for Christmas, explaining that people can attend just 2 social gatherings during the week. Saskatchewan imposed new restrictions Wednesday, including mandatory masks in schools and the suspension of sports. BC extended its state of emergency through Dec 8, including a ban on all events and social gatherings, and enforcement of mandatory masks in public indoor spaces with a $230 fine.

Yet with far worse pandemic curves, the premiers of Alberta and Ontario are enacting feeble restrictions, too little too late, more concerned about violating individual freedoms and impacting business profits than protecting frontline healthcare workers or the lives of the most vulnerable. 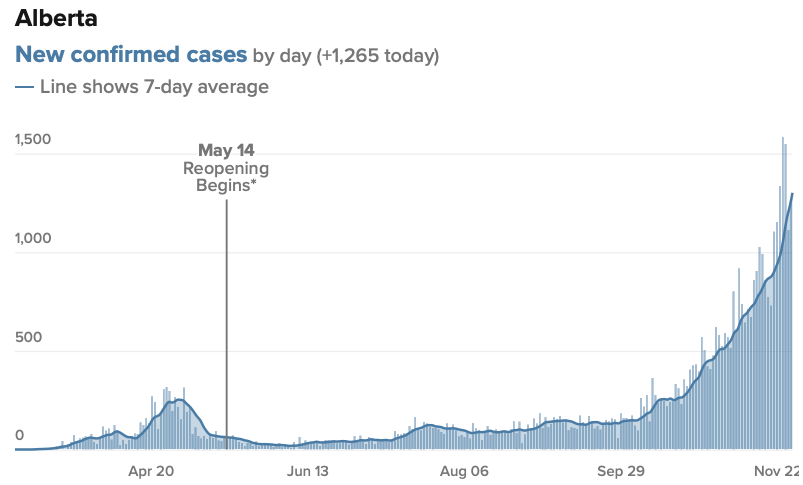 On Tuesday, Alberta premier Jason Kenney declared a state of public health emergency, with “minimum” restrictions on bars, restaurants, megachurches and casinos, while banning all private indoor gatherings and sending grade 7-12 students home to study online starting next week (giving school boards and teachers little notice). Critics argue he ignores medical advice and “dithers” with “half-measures,” and that his “balanced approach is a fast-track to failure.” Contact tracers are overwhelmed and 80% of cases cannot be investigated. The number of COVID19 patients in Alberta ICUs could more than double in the next 2 weeks. As a result, health officials are setting aside an additional 2,400 acute-care beds in anticipation of a surge in COVID19 hospitalizations. One uAlberta infectious disease expert says the measures will reduce transmission, but may not be enough to “avert disaster.” A Calgary urgent care doctor says “all we’ve done is take our foot off the gas.”

“It sure looks like public health policy in Alberta is now being guided by Restaurants Canada and the Canadian Federation of Independent Businesses, not the chief medical officer of health.” – David Climenhaga, The Tyee

“I feel like we are in a car that’s careening towards a cliff, and we had the chance to sort of turn the wheel or to hit the brakes, and all we’ve done is taken our foot off the gas.” – Raj Bhardwaj, Urgent Care Doctor, Calgary

Yesterday, Ontario’s Auditor-General concluded that the province’s response to the pandemic has been “disorganized and inconsistent,” lagged those of other provinces, and sidelined key health officials. With 500 members, the “health command table” is unwieldy and not directed by public health experts. Testing capacityand contact tracing were wholly inadequate. For his part, premier Doug Ford accused the AG of “throwing hand grenades” at the PHO and Health Minister. “Don’t start pretending you’re a doctor… stick with the number-crunching.”

Despite the scathing condemnation of Ontario’s pandemic response, Canada’s most disappointing news this week came from the Prime Minister, who warned on Tuesday that Canadians will wait longer than people in other countries for a COVID19 vaccine, because of a lack of domestic manufacturing capacity. The US and Germany hope to start vaccinations in December, and Spain in January. India and Australia are already producing the AstraZeneca vaccine under license. China has reportedly already vaccinated ~1 million people using one of their 3 vaccines – none of which has reported any results from phase III trials yet. Instead, Canada has been securing therapeutic drugs to treat the most severe cases. Vaccines are not expected to arrive until “the early months of 2021.”

The one vaccine that Canada could conceivably manufacture under license, at least in small quantities, had its own setbacks…

AstraZeneca and Oxford U researchers acknowledged a vaccine manufacturing error that throws preliminary trial data into doubt. A batch of the vaccine with the wrong concentration gave almost one-quarter of the volunteers a half dose, unintentionally – and surprisingly, those volunteers were better protected than those who received 2 full doses. (They were also younger participants, though.) To add to the confusion, results from 2 differently designed trials in Britain and Brazil were combined. Although the AstraZeneca vaccine is the cheapest, easiest to manufacture and distribute, “spotty disclosures have eroded confidence” in the reliability of the results. The odds of a quick emergency use authorization are falling quickly.  New York Times

Purdue U (IN) announced yesterday it will reward >15,000 employees (hired before Sep 1) with a $750 bonus for their “heroic work” keeping the campus open during the pandemic.  US News

U South Carolina president Bob Caslen reported yesterday that he has tested positive for COVID19, and is isolating at home. He visited several large student gatherings on Hallowe’en night “to see the conditions himself.”  USC has tracked >3,000 cases since Aug 1.  US News

Saint Mary’s U (Halifax) reports a positive case in a community member (SMU’s first to my knowledge).  Global

Western U’s University Hospital reported 5 more patients and staff tested positive yesterday, bringing the total to 47 in that outbreak (and 134 this fall).  CBC

Montreal students living in residences are reportedly in the eye of a mental health storm, “cracking under the pressures of online classes, isolation and policing that has them feeling like prisoners.” While Concordia U closed its residences for the year, uMontreal, McGill, UQAM and many CEGEPs have reopened residences at reduced capacity. Student leaders at McGill report that security guards patrol residence hallways, issuing “strikes” to students found gathering in rooms, and some students have had panic attacks. “It’s like doing correspondence courses in prison.” Mental health researchers have observed that “the pandemic is being experienced by some students as a trauma, not a normal type of stress.”  Montreal Gazette

“It’s just all very sad. I’ve been working at CEGEPs for 30 years and I’ve never before seen a campus so quiet, so empty. I really miss seeing the kids and I feel bad for them, since they really look forward to finally coming to CEGEP.” – Claude Roy, Director, CEGEP André Laurendeau

“These are kids, some as young as 17, who are a long way from home, many for the first time. They are under a lot of pressure… and they are sending in uniformed security guards to patrol bathrooms?” – Concerned father of a McGill U student in residence 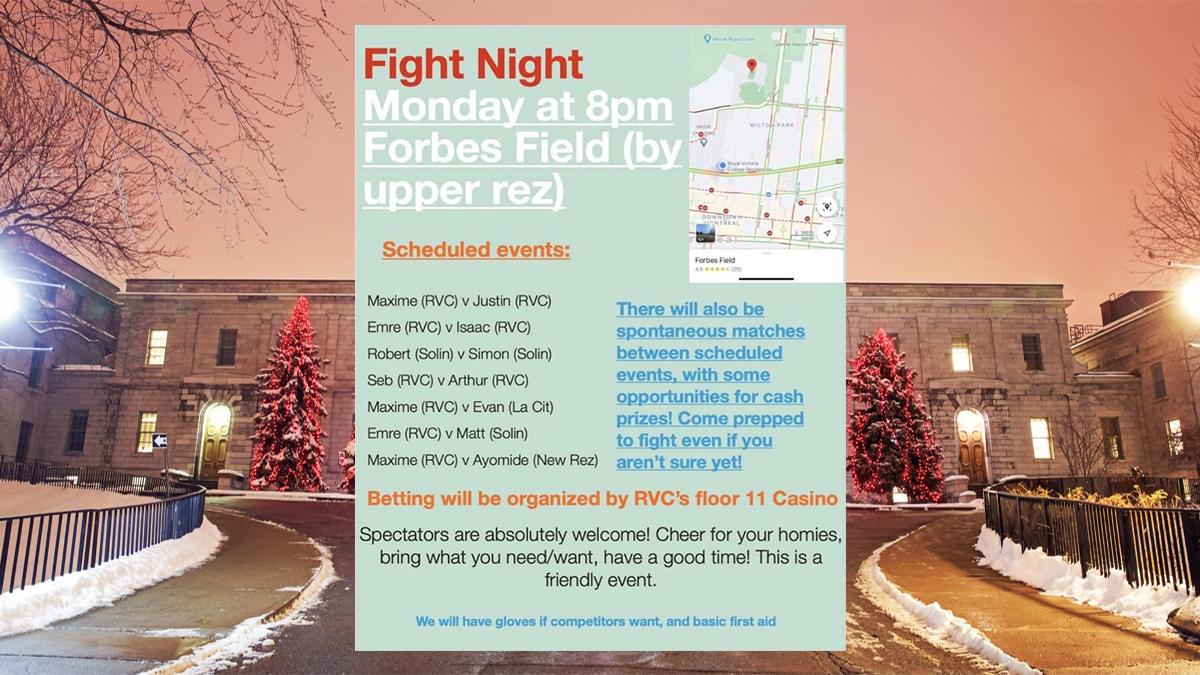 McGill students have brought “Lord of the Flies” to campus with a literal “Fight Night” – complete with posters to advertise the event (breaking the “first rule of fight club”), and organized gambling. Campus security “did not witness any gathering.” Videos from student witnesses have been published by national media, with accounts of crowds numbering 50-60 – but, says one witness, “I didn’t see any blood during the time I was there.”  CTV

“Rez is following the same activities as jails… All they do is smoke together outside. They’re fighting now… I’ve called New Rez ‘Alcatraz’ as a joke.” – Anonymous McGill student, to CTV

I mentioned Monday that Brandon U was joining Carleton and Bishop’s in announcing pass/fail grading options for their undergraduates this term. Students across North America are lobbying for similar compassionate provisions…

uManitoba Students’ Union and Student Senate Caucus have proposed a pass/fail option, or letter grades excluded from GPA calculations, for a maximum of 1 course per term this academic year, as well as the option to pause courses for a temporary incomplete grade. UM says the proposal is “under review.”  CTV

In Washington DC, 3 universities have implemented variations of pass/fail grading for the fall term: American U, George Washington U and Georgetown U. Nearby Howard U, on the other hand, has not. Students there have gathered 2,550 signatures on a petition to extend pass/fail grading, but “university leaders won’t budge.” Likewise 7,770 have signed a petition at uMaryland College Park to extend the pass/fail option from a single course to all courses. “If life is not back to normal, grading shouldn’t be either.”  Washington Post

“Use of pass-fail grading can diminish options for graduate school or postgraduate employment for some students and affect accreditation or micro-credentialing for others.” – Mary Ann Rankin, Provost, uMaryland College Park

Dawson College students have joined those at Polytechnique Montreal in lobbying for all in-person exams to be moved online. The schedules, which include exams right up until Dec 23, will not allow students any time to quarantine before joining family Christmas Eve. Both schools are planning a hybrid of remote and in-person exams – but Concordia U and McGill U have moved all their finals online. A Dawson spokesperson said Tuesday that “plans for in-person exams are currently under review and we may have news to share later this week.”  Global

York U’s Right the Future recruitment campaign is designed to appeal to students who want to “tackle world issues” and “make things right” by “creating positive change for the future.” A series of wordless 6-sec and 15-sec videos focus on homelessness, the environment, and equity/diversity. Each begins with a somewhat depressing view of a homeless man, polluted ocean, or male-dominated STEM lab – but then a red box opens up a window into a better world, in which the homeless man reclines on a couch, the discarded plastic bag becomes a jellyfish, or the robotics lab has much more diverse students in it.  YorkU

Thanks for reading!  Be safe and stay well,