COVID 101: The Second Wave, and Waiting for a Vaccine

Thanks for allowing me an extended weekend – hard to believe it’s been 5 days! Naturally, so much has been happening on the COVID19 front, that we’re going to have to spend today’s issue catching up.

Across much of the country, institutions are closing some facilities and reverting to online delivery in response to elevated PHO restrictions. Instead of isolated cases on campus, we’ve now got full-blown “outbreaks” in residence halls at Western and Laurier. And yet, some students are still disregarding PHO warnings and police fines, fuelling the second wave of the pandemic. They seem unaware of the risks involved in expanding their social circle – and reports are circulating that Brigham Young students are deliberately trying to get infected, so they can sell their convalescent plasma for up to $200 a shot.

“Earlier in the year, we were fighting a semi-invisible disease, about which we had little knowledge, and it seeded in the community at great speed. Now we know where it is and how to tackle it – let’s grasp this opportunity and prevent history from repeating itself.” – Jonathan Van-Tam, Deputy Chief Medical Officer, England

As many have been predicting since March, the northern hemisphere is facing a second wave of the pandemic as it heads into colder weather, just as it did with the Spanish Flu (1918), Asian Flu (1957), and Swine Flu (2009). The world is approaching 38M COVID19 cases, with new daily records of >350,000 infections – and estimates that we are undercounting infections and deaths significantly. 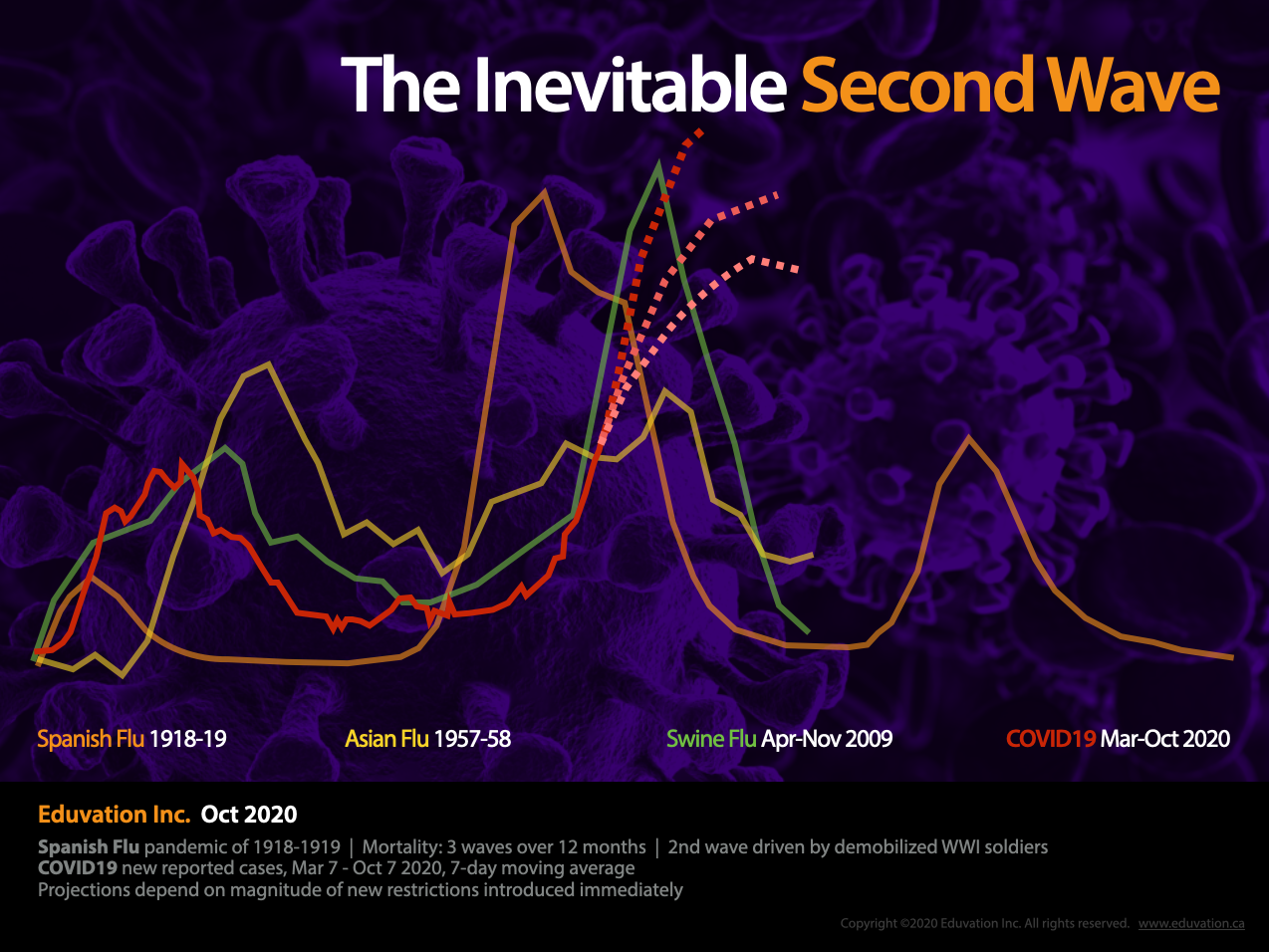 COVID19 case counts are rising rapidly across Europe, hitting near-record levels in Italy, France, Spain, Ireland and Russia — but some scientists are reluctant to call it a “second wave” because there haven’t been enough deaths yet. (Thanks to improved treatments, the moderating effect of face masks, and the fact that much younger people are getting infected.) Britain is at a “tipping point,” says the deputy chief medical officer. 5 cycling teams in the Giro d’Italia have been hit by COVID19, bringing the event to the “brink” of cancellation. 35-year-old Portuguese soccer superstar Cristiano Ronaldo tested positive while with his team – who is going on to play without him in Lisbon today. 7 other players have tested positive.

Here in Canada, Quebec has moved 3 more regions to “red alert” status and one to “orange.” Researchers at McGill and uToronto are calling on the province to share more transparent data by region and age group.

Late last week, Ontario’s premier finally caved and ordered bars, restaurants, gyms and theatres closed in Ottawa, Toronto, and Peel Region – and he says he’s “praying” he won’t have to expand the restrictions to other regions. But outside the red zones, a single spin studio in Hamilton was the source of 61 cases of COVID19 so far, and each case apparently had 20-25 contacts. (Gah!)

Even provinces that had been fortunate are starting to worry, like those in the “Atlantic Bubble.” New Brunswick suddenly has 82 active cases. NL has 8 active cases, NS 4, and even PEI has 3. Manitoba’s Chief PHO expressed his frustration yesterday with symptomatic people “out and about” mingling with non-household members. Contact tracers are overwhelmed because many who have tested positive have also been in close, prolonged contact with up to 40 other people, in multiple venues. (Double Gah!)

Saskatchewan will be bringing in new restrictions on private gatherings this Friday, cutting their size in half to 15. Outbreaks have been linked to bars, churches, and a lumber store where politicians were campaigning. Again, “contact investigations are also having a harder time confirming the source of transmission, because of the larger numbers of contacts that people are having.” (Apoplectic unintelligible sputtering here.)

The sad reality is that restrictions on indoor dining, drinking, dancing and exercise should have been put in place far earlier, if we hoped to keep schools and the rest of the economy open through year-end. Clamping down restrictions when the infection curve has already set new records is far too late: the line will continue straight upward for at least 2 weeks, even if those measures take immediate effect. And even anecdotally, plenty of people stretched the limits on social bubbles for (Canadian) Thanksgiving, so we’ll see the impact of this past weekend in 2-4 weeks as case counts, hospitalizations, and likely also deaths rise.

That’s why it’s particularly astonishing to see the government of Alberta announce they will slash up to 11,000 jobs from the healthcare sector, in the midst of a pandemic. More predictable, although equally tone-deaf, are Cineplex CEO Ellis Jacob’s criticisms of PHO restrictions as “excessive.” (Hardly!)

“These plans are cruel. They are irresponsible and they are stupid. They will create nothing but chaos throughout health care institutions across this province.” – Rachel Notley, Opposition Leader, Alberta

Algoma U reports a confirmed case on campus.  Sault Star

Brock U is reporting its 3rd and 4th COVID19 cases.  Brock

Carleton U has a 6th student in residence who has tested positive for COVID19. (The previous 5 have recovered.)  The Charlatan

Laurier U has had 2 floors of the Clara Conrad residence declared an outbreak by the regional PHO. Reportedly 7 students are infected, 4 of them in residence, but all residents of the 2 floors must isolate for 2 weeks. WLU has had 15 students test positive since Sept.  WLU

Niagara College has reported its first case of COVID19, for someone who was on the Niagara-on-the-Lake campus Oct 5.  CHCH

Trent U reports a student who “does not live on campus or in the Peterborough community” but was on campus Sep 29 has tested positive in their hometown. This is Trent’s first confirmed and reported case. Peterborough Examiner

Western U has a new outbreak of COVID19 in its London Hall residence, where there are currently 4 confirmed cases. The students are isolating elsewhere, and the University is delivering meals. Some close contacts have also been moved to a quarantine location “out of an abundance of caution.” The PHO describes a “zone defence” strategy instead of person-to-person contact tracing.  Western

Meanwhile in the US…

Bethel School of Supernatural Ministry (CA) asked 1,600 students to quarantine after 137 staff and students tested positive for COVID19.  (Ironically, the Bethel Church is known for “praying away” ailments.  Newsweek

Brigham Young U is troubled by reports that students may have intentionally tried to contract COVID19, because nearby blood donation centres are paying up to $200 per visit for convalescent plasma. BYU will immediately suspend and potentially expel students who intentionally exposed themselves to infection. With 34,000 students currently on campus, the school reports just 109 active cases.  NPR

Even if you adhere to the “rule of 6,” you are exposed at just 2 removes to potential infection from more than 250 other people! 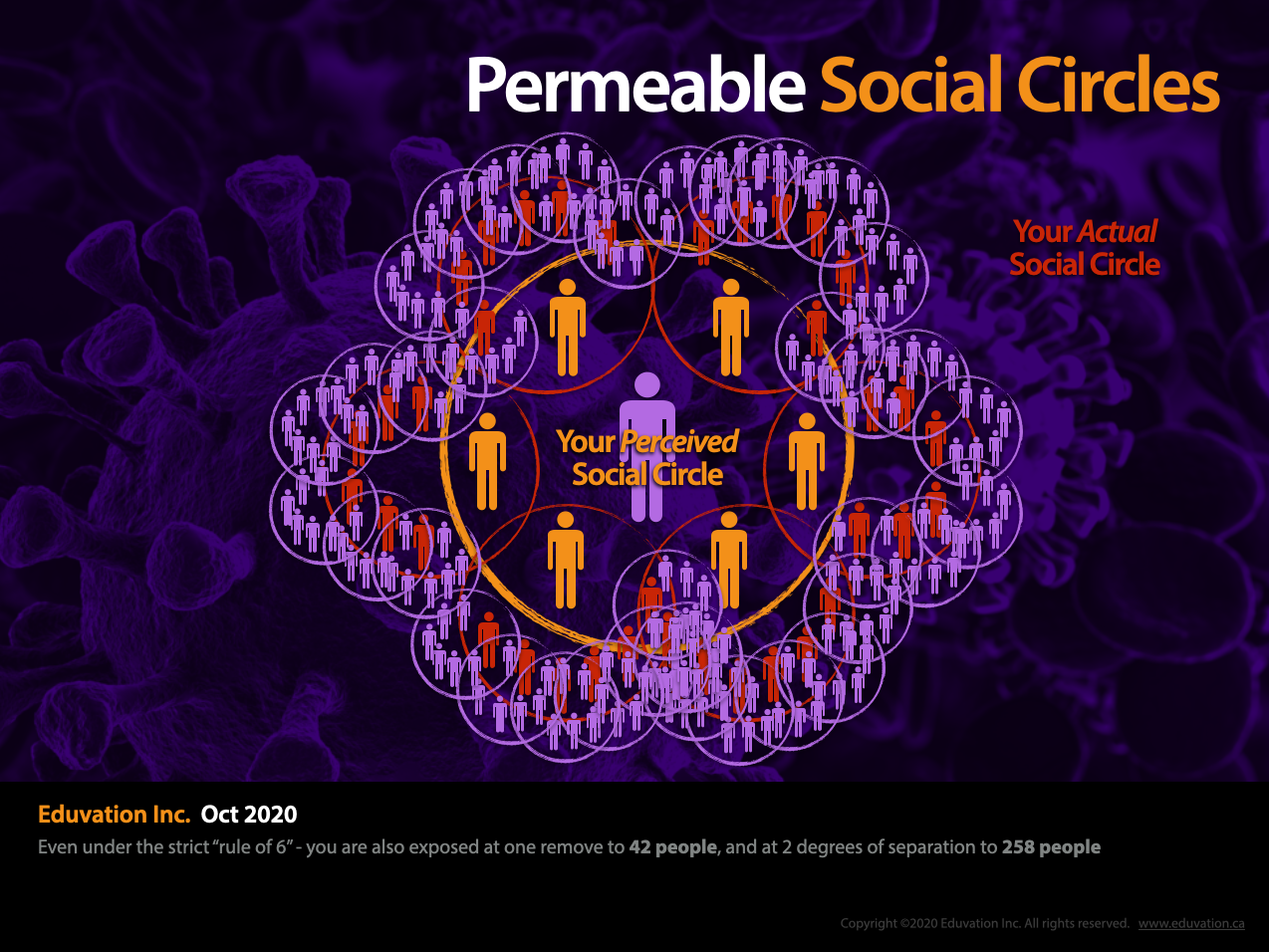 Acadia U is likely the university being attended by a Wolfville NS student who has been fined up to $700 by police for holding a house party with 75 students attending. Toronto Star

St Francis Xavier U has sanctioned all of its student athletes for 2 weeks, taking away practice and training privileges, after several of them broke COVID19 rules by attending an off-campus party.  CBC

Western U students in London Hall report that there are “parties every night,” inevitably leading to the current outbreak of COVID19. The university has reportedly posted “additional security officers” to guard residence building doors and limit access only to those who live there.  London Free Press

Waiting for a Vaccine

With the Trump White House openly embracing the “Great Barrington Declaration,” the WHO is reminding the world that a herd immunity strategy would be unethical, requiring the death of some 10M people worldwide. (Of course, some sociopaths still think it would be worth it, to prop up stock market gains and the economy.)

The right way out of this pandemic still hinges on the arrival of a vaccine, but it will take time to get it right. 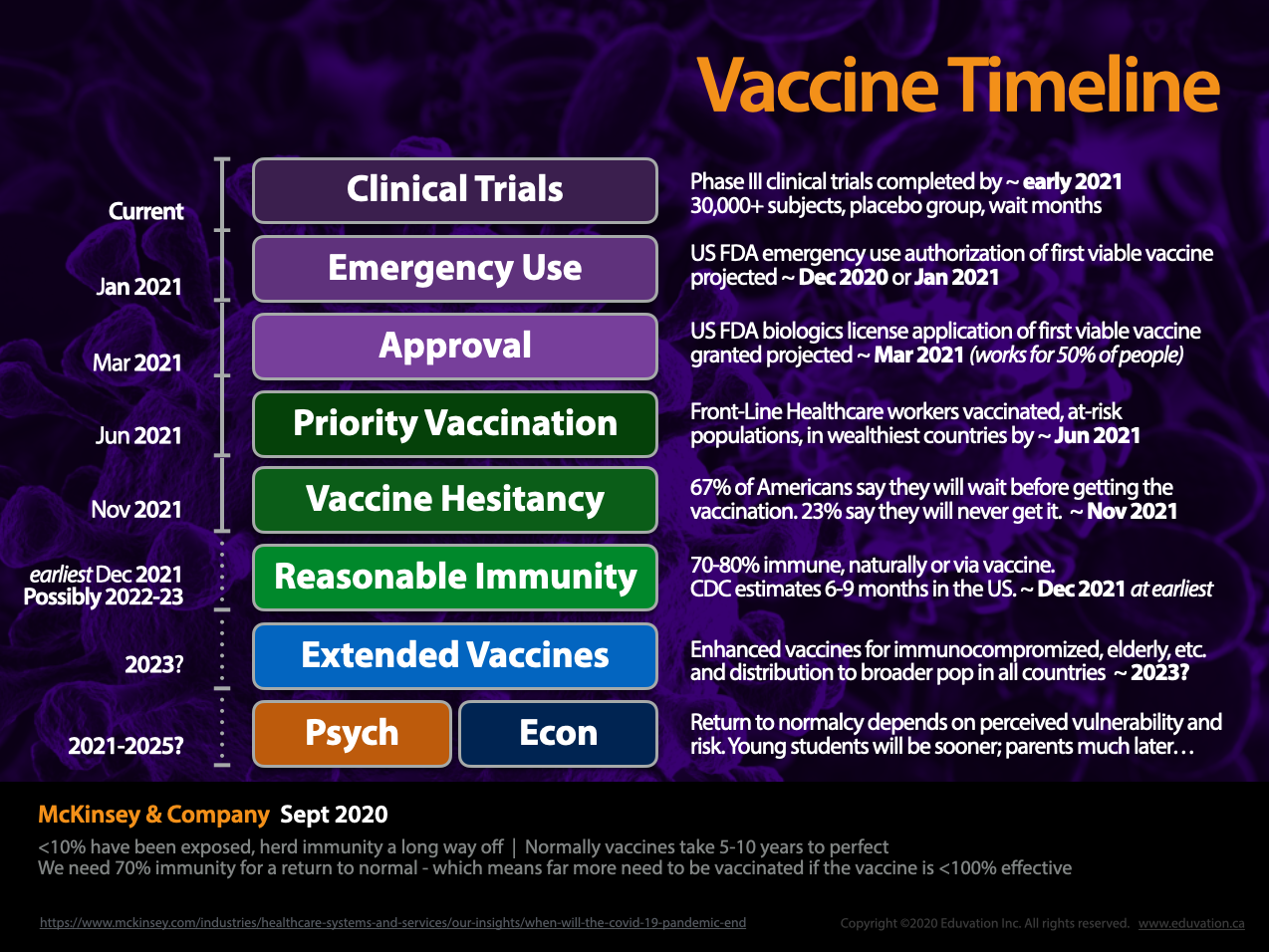 You may recall that AstraZeneca paused the clinical trial of its COVID19 vaccine for more than a month back in early September. (The US trial remains on hold.) In recent days, 2 more vaccine trials have been paused. Eli Lilly & Co paused the trial of an antibody treatment over a “safety concern.” Johnson & Johnson is awaiting an independent review of an unexplained illness among its volunteers, although it still plans to complete recruitment for the 60,000-person trial by Dec or Jan 2021.

Such pauses are not uncommon in clinical trials, but delays are to be expected, and it’s important to understand the timelines here. Politicians like Donald Trump have loudly and repeatedly insisted a vaccine will be available before the Nov 3 presidential election, which is patently absurd. More likely, we will see a vaccine roll out in Q3 or Q4 of 2021, and it will likely take another year or two to achieve “reasonable immunity” and an epidemiological end to the pandemic.

“Never in the history of public health has herd immunity been used as a strategy for responding to an outbreak, let alone a pandemic… Letting the virus circulate unchecked means allowing unnecessary infections, suffering and death… Allowing a dangerous virus that we don’t fully understand to run free is simply unethical. It’s not an option.” Tedros Adhanom Ghebreyesus, Director General, World Health Organization

Algonquin College has closed a campus restaurant, theatre and fitness facility, and is reviewing new PHO regulations in Ottawa to determine if other operational changes are required.  Algonquin

McGill U has cancelled most in-person teaching in response to Montréal’s designation as a red zone in Quebec.  McGill

Mount Allison U has closed all athletics and recreation facilities and services, as the Moncton area moved to Orange level.  MtA

uOttawa has responded to new PHO restrictions by cancelling all events (except prayer services), closing dining areas, gym and pool. No recreational or sport activities will be allowed, except for varsity training.  uOttawa

uToronto has closed its gyms, fitness centres, and campus dining areas in response to PHO restrictions in Toronto.  uToronto

Aurora College (NWT) has released a 3-year strategic plan to transition into a polytechnic university, with a significant emphasis on Indigenization.  CBC

Centennial College has released a COVID19 Second Wave Action Plan to guide the college through “what will most likely be choppy waters over the next while.”  Centennial

Laurentian U has hired Ernst & Young to review its financial outcomes and budgets, and propose potential solutions and opportunities.  CBC

uLethbridge is hosting representatives from Navitas, “the beginning of a process to understand options and address questions that would inform future considerations of their service.”  uLeth

SAIT announced yesterday that it will continue with online and blended delivery throughout the Winter 2021 term. (Internal email)

uWinnipeg has decided that the Winter 2021 term will continue to be delivered remotely, with only a few F2F classes.  uWinnipeg

Tackling the Challenges of the World

uWindsor has just released a series of a dozen 15-sec video testimonials that nicely convey key benefits like customizable double-majors, undergraduate research, field study, or foreign exchange. In this example, Khushali, a student in the Behaviour Cognition & Neuroscience program, describes her research project into antiviral coatings for high-touch surfaces.  YouTube

Thanks for reading. Stay safe and be well!