It’s been a short week here in Canada (thankfully), and yet like this whole pandemic, it has paradoxically also felt really LONG.  TBH, much of my mental and emotional exhaustion stems from the political and public health situation unfolding south of the border, and certainly American universities – and especially the community colleges – are beset with a dystopian nightmare.

No-one in the US has been harmed more by the economic and health impacts of COVID19 than visible minority and particularly Black Americans – and so I also have to dedicate some space today to set the record straight, and share what I have learned since I inadvertently made things worse instead of better yesterday. (See my mea culpa below.)

Here in Canada, though, the worst fears of many varsity athletes came true yesterday, as sports conferences cancelled competition and championships through the Winter 2021 term…

By coincidence, several US reports came across my desk today, providing perspective on the enrolment and operational situation south of the border…

The COVID19 pandemic “is the greatest threat to prosperity and well-being the US has encountered since the Great Depression,” write 2 Harvard economists in the Journal of the American Medical Association. They estimate the total cost to the US alone, through fall 2021, will be $16.2 trillion, including $7.6T in lost economic output, $4.4T in losses due to premature deaths (assuming $7M per life and 625,000 deaths in the US), $2.6T in healthcare costs, and $1.6T in increased mental health costs (if they last just one year). The total is about 90% of US annual GDP, 4x the impact of the 2008 recession, and more than twice the cost of all the wars America has fought since 2001. Or put another way, approximately the cost of “50 years of climate change.”  Harvard Magazine

US Frosh Declined 16% this Fall 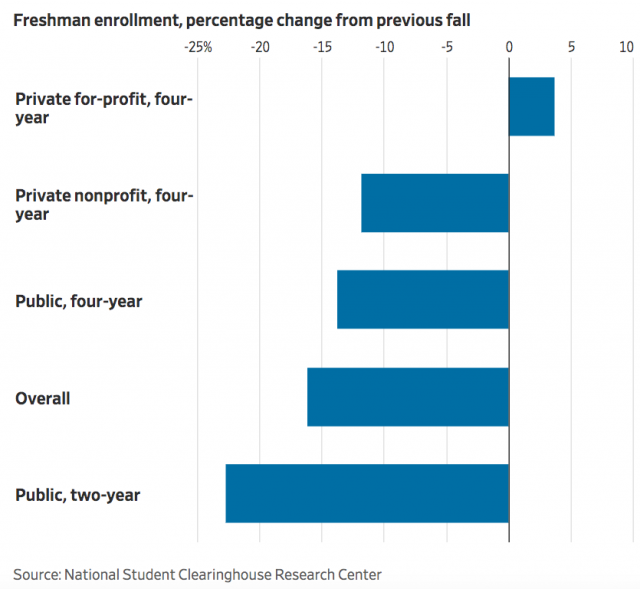 The National Student Clearinghouse Research Centre has updated its preliminary numbers, and now with 54% of US institutions reporting, enrolments fell almost twice as far as it initially appeared. Although grad enrolment rose +2.7% overall, undergrad enrolment now appears to have dropped -4.0% from last year – and community colleges dropped -9.4%. Even worse, first-time undergrad students dropped by -16.1% — and -22.7% at community colleges! Naturally international enrolments also dropped: -13.7% for undergrads, and -7.6% for grads. Only the private for-profit universities, with a long history in online delivery, saw undergrad enrolments rise, by +3.0%, and grad enrolments rise by +9.3%.  NSCRC

An August survey of 433 higher ed admissions directors found that 90% were at least moderately concerned about meeting their goals for enrolment of new students – and 60% were “very concerned.” (They weren’t wrong, judging by the NSCRC stats above). 38% felt that spring campus closures hurt recruitment “a great deal,” and 28% expected their institution to “admit students it probably would not have admitted in prior years.” Compared to 2019, their institutions were less likely to pursue international or out-of-state students, and more likely to pursue online, first-generation, older or part-time students. About 70% of public universities, and 52% of all institutions, changed to test-optional or test-blind admissions this year, and two-thirds expect that to continue. Overall, 12% disagreed with their college’s decision about instructional delivery this fall. Inside Higher Ed

SUNY Oneonta shut down all in-person classes in early September after it experienced the worst COVID outbreak of any university in the state, with more than 700 students testing positive (about 12% of enrolment). Social media posts about students dragged from dorms at midnight by men in hazmat suits went (of course) viral. Now, president Barbara Jean Morris has resigned, and been replaced temporarily with an interim president from SUNY Purchase, where they experienced just 7 cases.  New York Times

What Keeps Presidents Up at Night 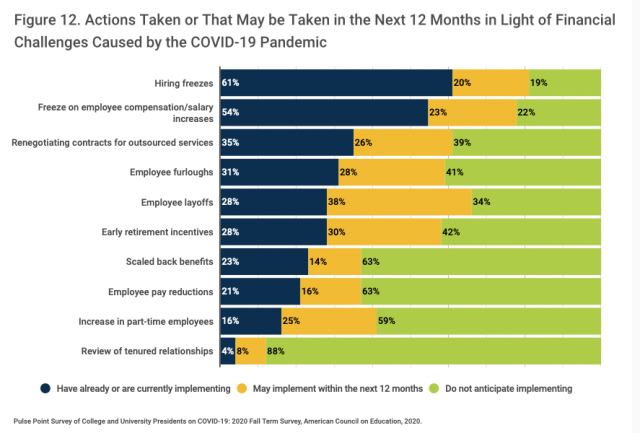 A national survey of ~300 US campus presidents in late September found that most are cutting staff and struggling to provide sufficient COVID19 testing on campus. While 43% are seriously concerned about long-term financial viability, 53% consider student mental health one of their top 5 pressing issues (and 42% included staff and faculty mental health). More than 20% are dealing with employee layoffs, furloughs or salary reductions. The majority report that overall Fall enrolment and international enrolment is down, and many report declining out-of-state enrolment too. Of the 22% who reported minor increases in enrolment, they credit SEM tools, increased financial aid, discounted tuition, expanded online offerings, or retention initiatives. ACE

Announcements about Winter 2021 varsity athletics across Canada were made yesterday…

AUS has formed a committee to explore the possibility of regional competition in the Winter 2021 semester. “We welcome the opportunity to seek out safe and viable ways to resume competition this season.” Its recommendations are due in early November.  AUS

Canada West has cancelled conference competitions, playoffs and championships for the remainder of the 2020-21 season in basketball, volleyball, hockey, wrestling, and rugby. Decisions on curling, track & field, and swimming have been deferred until later. Conference members “have been empowered to explore competitive opportunities” in their regional cohorts.  CanWest

OCAA announced yesterday that sanctioned varsity athletics competitions are cancelled for the 2021 Winter semester at Ontario’s 27 member colleges and universities. “After extensive contingency planning and collaborating with our members, the reality is that there are far too many obstacles to allow the OCAA to operate while providing a safe and quality varsity experience for our student-athletes.”  OCAA

OUA announced yesterday that all sanctioned sport programming and championships for Ontario university athletes are cancelled up to Mar 31 2021. “It has become clear that OUA-sanctioned Return to Competition would not be safe for the 2nd Term.”  OUA

RSEU (Quebec’s student athletics) has suspended all activities for all university sports until at least Jan 15.  RSEU

U Sports also announced yesterday that it cannot offer the Winter 2021 national championships for Canadian university athletes due to the pandemic. “It is not logistically possible for teams to be travelling across the country at this time,” in part because of the “Atlantic bubble.” U Sports says it is working towards a Fall 2021 return.  U Sports

“The remarkable success of the Atlantic Canadian bubble places our conference in a unique position nationally to consider options surrounding return-to-play. And while we approach this committee with great optimism, we also know that we must exercise caution and vigilance with respect to public health guidelines.” – Phil Currie, Executive Director, Atlantic University Sport

Yesterday I shared 3 new strat plans from uCalgary, Carleton, and Holland College – but I forgot I was saving this one in a special file…

“New Thinking” for a “New World”

Last month, SAIT unveiled its new 5-year strategic plan, New World. New Thinking, which emphasizes skills for the future (including a growth mindset, entrepreneurial skills, digital technology and data literacy), learning for life (personalized learning, new delivery models and credentials, and growing CE), global perspective (through international student recruitment, outbound opportunities, and industry or PSE partnerships), and being industry-driven (by enabling a “free flow of people” through secondments and internships, facilitating tech transfer and consulting agreements). “We blur the lines between industry and SAIT to strengthen the economy.” SAIT aims to be “the talent accelerator of choice” and a “preferred lifetime learning partner.” “The story of our province is still being written. Our plan is right for our evolving world.”  SAIT

I also made a more significant oversight yesterday…

I’m truly grateful to have loyal readers who not only spend the time to read closely what I have written, but also (kindly) let me know when I mess up. My job is to keep learning every day, from books, RSS feeds, periodicals, videos, the boards and leadership teams I facilitate – and also from my bright and forward-looking readers. (Sometimes I don’t even know what I don’t know!)

Yesterday I cited a Newsweek story about COVID19 cases on the football teams at uAlabama and uMississippi – and in doing so, I repeated the article’s use of the nickname, “Ole Miss,” without giving it a thought. As one reader pointed out to me, that was a mistake. Although “Ole Miss” is an official, multimillion-dollar brand, it was born (like many traditions at the university in Oxford MO) out of misguided nostalgia for the Confederacy and apologists for slavery. (This July feature in Mother Jones, “The Racism of ‘Ole Miss’ is Hiding in Plain Sight,” explored the implications in some depth, while last November The Chronicle of Higher Ed highlighted the political and financial resistance of alumni, donors and the university administration to changing the longstanding brand.) Some are proposing “uMiss” instead of “Ole Miss,” or “New Miss” instead of “Ole Miss.”

From a position of white privilege, and the safe distance of Canada, one might regard this as a distant, minor quibble over semantics – but the issue of uMississippi’s brand reveals embedded racism in the traditions and culture of the place. It must not be ignored or minimized on a campus where a Black fraternity house was burned to the ground in 1988, a white plantation owner (“Colonel Reb”) was the official team mascot from 1979 until 2003, frat students threw a noose over a civil rights statue in 2014, a confederate rally was held just last February, and last July white students posed for a selfie with rifles and a bullet-ridden memorial to a Black teen. (That teen, Emmett Till, was lynched in 1955 for supposedly whistling at a white woman.) Thousands of racial microaggressions agglomerate into macroaggression. Like those other multimillion-dollar brands, Aunt Jemima and Uncle Ben’s, “Ole Miss” needs to be consigned to the dustbin of history, and the sooner the better. We can start by doing our part. I apologize for my oversight.

Since yesterday, there were just 9 new cases reported in CdnPSE…

uCalgary reports another case on campus 4-7 days ago, in several buildings. uCalgary

Laurier’s Clara Conrad Hall now has 3 floors involved in the COVID19 outbreak, and the 7 cases I reported yesterday have now risen to 15. (With the 8 prior cases, Laurier is up to 23 since Sept, I believe.)  Global

Engineering Classes in a Pandemic

Boston U released a professional, although authentic-feeling, 10-min video to address the question, “How do Engineering Classes Work During a Pandemic?” Senior Aaron Hwang brings us along for his first day of in-person and remote classes, remote-control robotics labs and of course, Zoom classes. “It seems to be putting more strain on the professors” to teach in a Hyflex (“Learn from Anywhere”) model.  YouTube

I hope you find some time to relax this weekend – I’ll be gearing up for a virtual conference keynote on Sunday for the Heads of Canadian Accredited Independent Schools!  But I’ll be back in your inbox on Monday…

Until then, stay safe and be well!