Welcome to the Circus

I’m spending my second day with the good folks at Capilano U (virtually), but still pulled together some of the key happenings out there for you.

Hurricane Teddy is expected to make landfall in Nova Scotia tomorrow, prompting contingency planning at SMU, MtA, and other maritime institutions. (We have our fingers crossed for you guys!)

Since yesterday, Quebec has declared the start of its “second wave,” and Ontario’s premier will unveil a second wave plan later today, as the cases continue to rise. 4 more CdnPSEs have announced their plans for Winter term, and we have application statistics from Ontario universities for this fall.

I’ve also tracked 15-36 new COVID19 cases that impact CdnPSE (depending how you count them). In many cases, the outbreaks are ascribed to irresponsible social gatherings – and I’ve also noticed a wide variety of efforts to stop it, from the soft influence of RAs or social media campaigns, to “COVID marshalls” armed with bodycams, and police issuing thousands of dollars’ worth of tickets.

Since yesterday, it looks like up to 9 CdnPSEs have reported 15 more individuals testing positive for COVID19, not counting 18 at an adjacent hospital, 1 presumptive case, and several unidentified youth in the community…

uAlberta reports 5 men have tested positive for COVID19 at the St Joseph’s College residence. They, and the other 14 building residents, are in isolation – but because some of those residents play on varsity teams, the virus might have spread to 4 teams. Varsity athletics are suspended for 2 weeks as well.  Global

Calgary’s Foothills Medical Centre, adjacent to uCalgary’s Foothills campus, reports that 14 patients and 4 staff members have tested positive, and 1 patient has died. 57 people working in the units are in isolation. The sources have not been determined. (uCalgary’s COVID19 dashboard indicates no cases on campus.)  Winnipeg Free Press

Carleton U apparently now has 3 students “who tested positive” in isolation in residence, according to the student newspaper.  Charlatan

Dalhousie U reports a “probable case” of COVID19: an off-campus student who recently returned after travelling outside of the Atlantic bubble, and has been self-isolating as required. The student’s test came back “indeterminate.” (That is the only active case in NS, and there are only 5 in the other 3 Atlantic provinces.)  CBC

uGuelph confirmed 1 case of COVID19 on its campus. Since the PHO has not declared it an “outbreak,” it is likely not a student living in residence.  Global

London Ont saw 2 more people in their 20s test positive on Monday, following 46 Western students and 1 Fanshawe student last week. (The PHO is not specifying whether these 2 are students or not.)  CBC

uManitoba reports an individual was on the Bannatyne (medical) campus last week, and later tested positive for COVID19. One of their close contacts has also developed symptoms and test results are pending. (Sounds like 2 presumptive cases.) Some in-person classes/labs were postponed on Monday.  uManitoba

Queen’s U reports a positive case in their community. The individual is self-isolating.  Queen’s

The Price of Partying

The first weekend on many campuses resulted in noise complaints and concerns about exceeding PHO limits on public gatherings, but so long as students got a sobering lesson, things turned around…

UK universities are hiring “COVID marshals” and cities are hiring security firms to conduct “high visibility” patrols, in some cases every night from now until Christmas, to discourage irresponsible behaviour and disperse large gatherings of students. Newcastle U faces the daunting prospect of 28,000 students arriving on campus. Students complain that they are being harassed and treated unfairly.  The Guardian

At least 7 UK universities have student cases of COVID19 linked to “illegal freshers’ parties.” 4 students at U St Andrews tested positive after a dorm party, and 40 more are in isolation. Edinburgh Napier U reports at least 20 cases, and Glasgow U reports 9, after a series of parties. The term began earlier in Scotland, so they are uncovering cases first, but presidents across the UK are growing concerned as “students try to negotiate restrictive regulations designed to keep them safe.” Campus security are reportedly wearing bodycams while they disperse the parties, allowing disciplinary action to be taken against some students.  The Guardian

“At first everyone was: oh, security – but now there are positive tests coming out, we are kind of glad that some of these parties got dispersed.” – Marnie Davidson, freshman, Edinburgh Napier U

“Thousands of students descending on university towns, to gather in crowded accommodation, among residents of all ages – this was bound to have a huge impact.” – Richard Tyler, National Coordinator, National Houses in Multiple Occupation Lobby, UK

Shock ‘em with an Outbreak

Londoners were alarmed to see Western and Fanshawe students overflowing the sidewalks on Richmond Row the night of Sep 12, in this TikTok video posted to YouTube by local media. Sure enough, in the days that followed 49 students tested positive for COVID19. But last Saturday night, Sep 19, the media reported that the Richmond Row bar scene was “remarkably quiet – and few if any parties were visible around either school’s campus.” The PHO warns, however, “We’re still very much in that two-week window where the contacts who are already quarantined may become cases.” (All it took was 49 cases of COVID19, overwhelmed testing centres, public panic, and the university president warning that in-person classes were “in jeopardy.”)  London Free Press

Hurt ‘em in the Pocketbook

There are reportedly about 700 students living on campus at uVic this fall. The student paper, The Martlet, reported that 100 students were illegally gathered on campus the night of Sep 11. Saanich Police dispersed them, but the party regrouped shortly thereafter at a nearby elementary school, where they were again dispersed by police. No tickets were issued. This past weekend, students were apparently at it again. On Sep 18, Saanich Police found another crowd of about 100 students gathered on campus, but this time they issued 25 tickets for public alcohol consumption and lack of physical distancing. (Each ticket carries a $230 fine, so it was a $5,750 party, even before the beer.) Police returned to campus Sep 19 and were “pleased to see small groups of 5-8 socializing safely.”  The Martlet

Most academics, and academic institutions, would prefer to gently nudge students into better behaviour – to educate rather than punish…

Some police efforts at social media messaging strike me as a bit tone-deaf (but then I’m not the target market, am I?) Laurier retweeted Waterloo Regional Police’s graphic urging students to “Stay away from large gatherings. Stay safe,” with the hashtag, #NoPlaceLikeHome…

You’ll have to tell me whether the London Police Service does any better, with their cartoonish mascot “Chuck,” and the hashtag, #DontInviteCOVID2urParty. (Thanks Fanshawe for retweeting it…)

RAs on the Front Lines

Even though RAs are trained to cope with racism, depression, and date rape among residents, anxieties over COVID19 infection or campus closure are making their jobs “unbearable,” resulting in strike votes at uMichigan, Cornell, and other US colleges. Barely older than the freshmen themselves, RAs have to play both “good cop” and “bad cop,” acting as mentors and also policing health and safety regulations. Many are lobbying for better PPE and less in-person contact with residents. At uVirginia, RAs complained that 2 hours of Zoom training was inadequate preparation for this pandemic.  Chronicle

“A 2-hour training and an email does not get close to providing RAs and SRs with the emotional, psychological, and physical tools as well as detailed knowledge on how to handle situations related to containing the spread of the virus in residence halls.” – uVirginia Resident Staff petition

Stern prohibitions against socializing, however well phrased or oft repeated, leave students debating a yes/no choice – and all too often, throwing caution to the wind in order to enjoy the social interactions deprived them since March. Just as student life teams have long provided alcohol-free activities to compete with higher-risk alternatives, many are trying to provide safe socially-distanced alternatives to unregulated off-campus parties or bar-hopping. 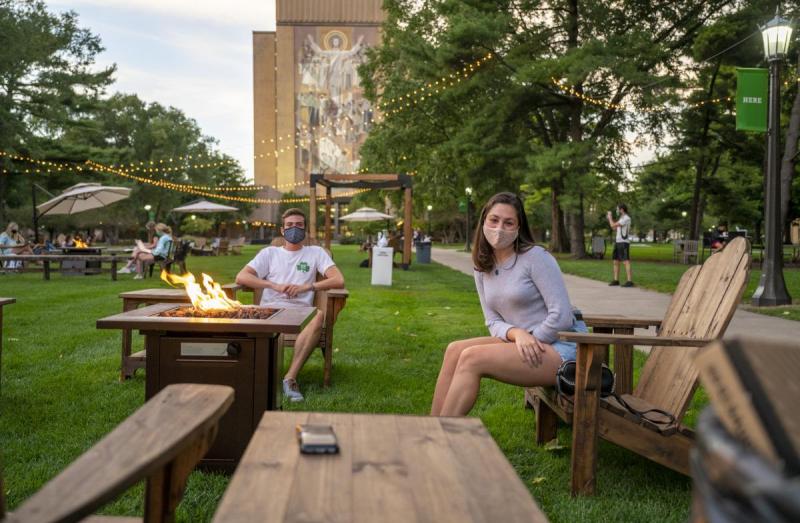 Notre Dame has installed an outdoor lounge of Adirondack chairs and fire pits on the campus green, with a stage for performances and lawn games. They plan to add outdoor heaters, until the semester ends in November. 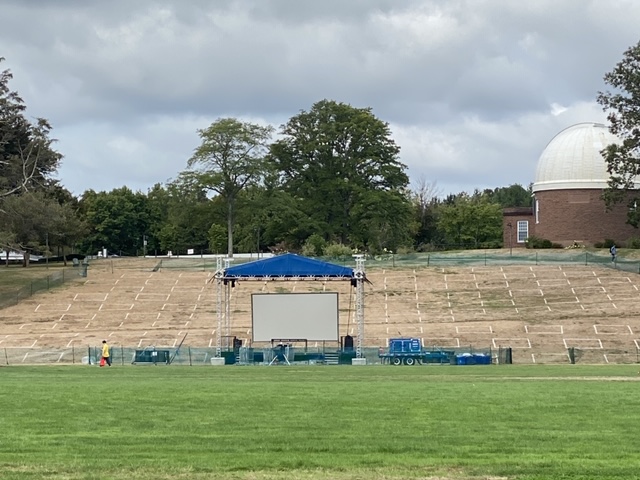 Wesleyan U has created an outdoor performance space, with social distancing markings for up to 100 people on the grass. Wake Forest U and Syracuse U are making tents available to student groups, with fire pits and even Jumbotron screens. “We look like a circus on campus right now, because we have tents everywhere.”  Inside Higher Ed

“I’d like to see colleges supporting students in safe socializing rather than taking an abstinence-only approach that we know is doomed to fail. Asking college students to basically lock themselves in their dorm rooms is not going to be feasible, but what might actually stand a chance of working is giving students an opportunity to stay socially connected and have fun that are lower risk… than crowded indoor house parties.” – Julia Marcus, epidemiologist, Harvard Medical School

It hardly seems newsworthy anymore, as institutions increasingly announce that the Winter term will be the same as the Fall term…

Brock U announced Friday that it will continue with primarily online classes for the full academic year, extending the model through the Winter 2021 term.  Brock

Durham College will continue offering programs through a combination of fully remote and hybrid delivery for the Winter 2021 semester.  Durham

Ryerson U has announced that its Winter 2021 semester will be offered largely online.  Global

Saint Mary’s U has announced “a mix of online and in-person classes” for the Winter 2021 term. “The goal is for every discipline to have opportunities for on-campus experiences, including small class discussion groups, experiential courses, labs, seminars and tutorials.”  SMU

Cape Breton U reports it has dropped 2,500 registrations this fall, and $16.6M in revenue as of Aug 31. “A good number” of students are taking 3 courses instead of the full 5. To address a $16M deficit, CBU has drawn its entire $6.3M reserve fund, rolled back wages 10%, eliminated vacation liability, cut operational expenses, and discontinued 60 contract employees – but it still needs to find $6M more.  CBC

uWaterloo released a series of heartwarming variants on the old “Dear First Year Me” meme from a few years back. Senior Lauren Ewen tells herself to relax, and shares some important advice, like “let people challenge you,” “never feel like you’re unable to change your path,” and of course, “get involved.” Oh – and “you will be required to move for the geese.”  YouTube

Thanks for reading!  Stay safe and be well… whether you’re sheltering from coronavirus, or Hurricane Teddy!