Taking the Bull by the Horns…

Today I’m looking forward to speaking with the board of Université St Paul in Ottawa (virtually), about the future of Post-Secondary Post-COVID. It’s always a pleasure to contemplate the relatively positive long-range picture, instead of the daily chaos.

But of course, that’s partly what this daily newsletter is for, so…

Canada’s COVID19 curve is headed up, and Chief PHO Theresa Tam warns that we are on track to quintuple new daily cases within a month, to twice the level reported at the height of our spring wave. Quebec has raised alert levels in several regions, bringing in tighter restrictions on gatherings and hospitality businesses, while ironically also recruiting retirees to help with COVID19 testing and contact tracing, and encouraging retired teachers to return to the classroom to fill at least 117 vacancies. The Toronto District School Board has delayed the start of some classes while it recruits online teachers. In Calgary K-12 schools, >1,850 students and staff are in self-isolation.

In the UK, where daily case counts have quadrupled in the past month, PM Boris Johnson announced new restrictions on pubs and stiff fines for anyone gathering in groups larger than 6. (Just last month, the government was encouraging people to go back to pubs and restaurants with a discount program – you can see where that got them.)

“Never in our history has our collective destiny and our collective health depended so completely on our individual behavior… The tragic reality of having COVID is that your mild cough can be someone else’s death knell.” – Boris Johnson, UK Prime Minister

As for the US, sigh… president Trump made international headlines by asserting that COVID19 “affects virtually nobody.” (He was talking about those under 18, but still contradicting scientists and himself as recorded in private.) For a mental break, you can enjoy the pretty colours in this animated map that sums up the last 6 months in just 30 seconds: 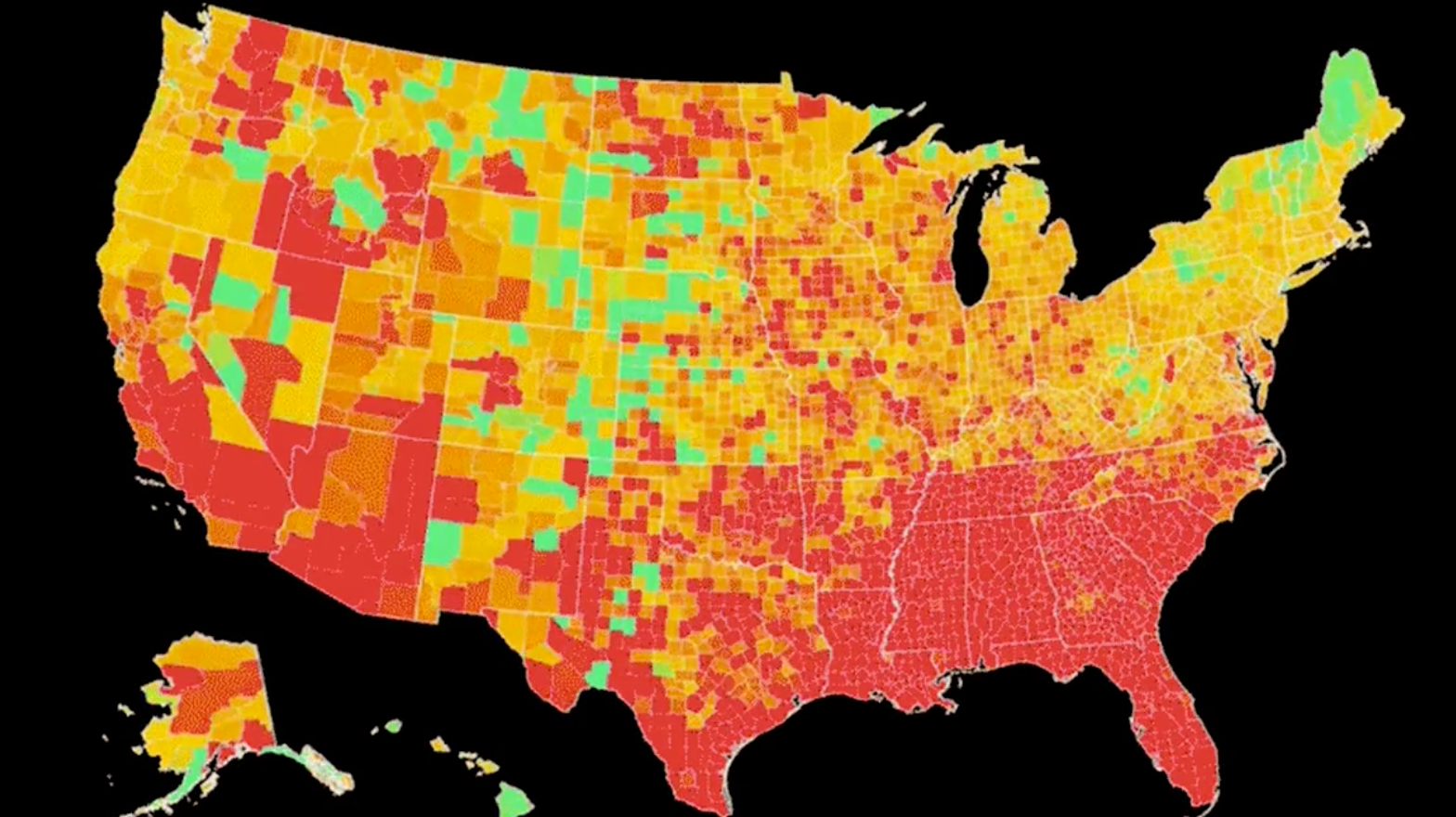 Carleton U announced yesterday 2 more on-campus students have tested positive, bringing the total to 5. The Charlatan

Fanshawe College reportedly has 1 new student case as of Tuesday, bringing their total to 2.  CTV

uGuelph reports a student at their Ridgetown Campus has tested positive.  CBC

Western U reportedly has 1 new student case as of Tuesday, bringing their total to 47 (I think).  CTV

Queen’s U announced yesterday that the majority of Winter 2021 term courses will be delivered remotely. “A small number of on-campus academic activities will be held based on the need for some students to access specialized facilities, such as labs or clinical settings, and to ensure all students can meet the academic requirements of their programs.”  Queen’s Gazette

uWaterloo announced yesterday that, for the Winter 2021 term, “we will continue to deliver most large courses online, with clinical programs, labs or tutorials available in-person as in the fall term.”  uWaterloo

In the good old pre-pandemic days, when colleges and universities commissioned institutional impact studies, it was to proudly demonstrate their spinoff benefits for the local and regional economies. This week we see studies looking at a whole other kind of impact…

Reopening US college campuses likely contributed 1,000 – 5,000 additional COVID19 cases every day this fall – and a new study concludes the “best estimate” is 3,219. (Rather like the contentious analysis of the Sturgis Motorcycle Rally, this uses cellphone GPS data to track student movements, and has not yet been peer-reviewed.)  The researchers emphasize the importance of limiting student movement onto and off campus, and recommend considering the infection rates in their home regions before inviting them back in January.  Chronicle

Doubling the Cases in a Small Town

A new (pre-print) study from the Ivey School of Business at Western U reports that the return of university students to mid-sized cities (like London, on which the analysis was based) could nearly double the cases of COVID19 in the surrounding community within a single semester. Their model city of 500,000 would experience 3,900 infections without the students – but add in 20,000 students contacting 18 people per day, and citywide infections rose 87%.  Testing students every 14 days reduced overall infections by 22%, and testing every 5 days could reduce infections by 40%.  London Free Press

“University students are a high-transmission group. They don’t exclusively have contact with each other. They are highly integrated into the community because they live and work and socialize both on and off campus.” – Lauren Cipriano, Assoc Prof, Ivey School of Business

Canada’s U15 are reticent to undertake significant restructuring of schools or faculties, some of which have been in existence for a century or more. (We all remember the implosion of uSask’s “TransformUS” in 2014 – although if you don’t, check out one of the very first episodes of Ten with Ken.) Which makes it all the more remarkable to watch things unfolding at UofA…

This week, the Academic Restructuring Working Group at uAlberta shared an interim report to elicit input from the campus community, providing 3 scenarios to consolidate the current 18 standalone faculties. Scenario A consolidates 5 faculties into schools within a single Health Sciences faculty:

The most striking and unusual is Scenario B, which consolidates almost all faculties into 3 “divisions” aligned with federal tri-council funding. The faculties would all remain “faculties,” at least in name:

Scenario C is a combination approach, which converts many faculties into schools within 3 faculties (Arts & Science, Health Science, and Applied Sciences), and 6 other integrates 6 other faculties within a shared division (to be named):

No matter how the process unfolds, uAlberta’s new president, Bill Flanagan, has certainly “taken the bull by the horns” (as my father would say, a born-and-raised Edmontonian).  uAlberta

Your World Your Way at uAuckland

Last week, uAuckland (NZ) published a series of 7 dynamic, 2-min student testimonial videos and one that shares segments from them. Impressive students, music, and production – but the titles (like “Meet Alicia”) do nothing to attract clicks.  YouTube

Macquarie U (Aus) has another riff on their “You to the power of (us)” campaign, a 30-sec vid called “Multiply your experience.” It emphasizes personalization options, courses co-created by industry leaders, and with in-built internships. “When you’re powered by our collective, you get the experience you need to get ahead.”  YouTube

Everyone stay safe and be well!