Little Rays of Sunshine in a Pandemic

The past few weeks have been exhausting for us all, so since it’s Friday I’m going to try my level best to minimize the negative news, and start the weekend off with as much positivity as I can muster. (You’ll have to let me know if it works for you!)

Sometimes good news is relative: just 8 new COVID19 cases in CdnPSE today, and a decline of 2.5% in US enrolments could have been much worse.

And sometimes it’s not good for everybody: There’s good news for those who wear glasses, but not contact lenses. British universities are benefiting from closed borders in Australia and New Zealand. And if OER textbooks save students $20M, that’s coming out of publishers’ pockets…

But OK, let’s get the negative stuff out of the way as quickly as possible…

Swiss authorities have ordered 2,500 undergrads at the École Hôteliere de Lausanne into quarantine because off-campus partying led to 11 confirmed cases (so far). The entire student body is 3,500, so 71% are in quarantine. The elite hospitality management school says a “disciplinary investigation” is underway.  AP

“The message they have heard is: ‘You are out of jail, go out and play.’ We don’t want to be the fun police, but we want people to have fun safely.” – Margaret Harris, World Health Organization

Queen’s U – 1 student in residence 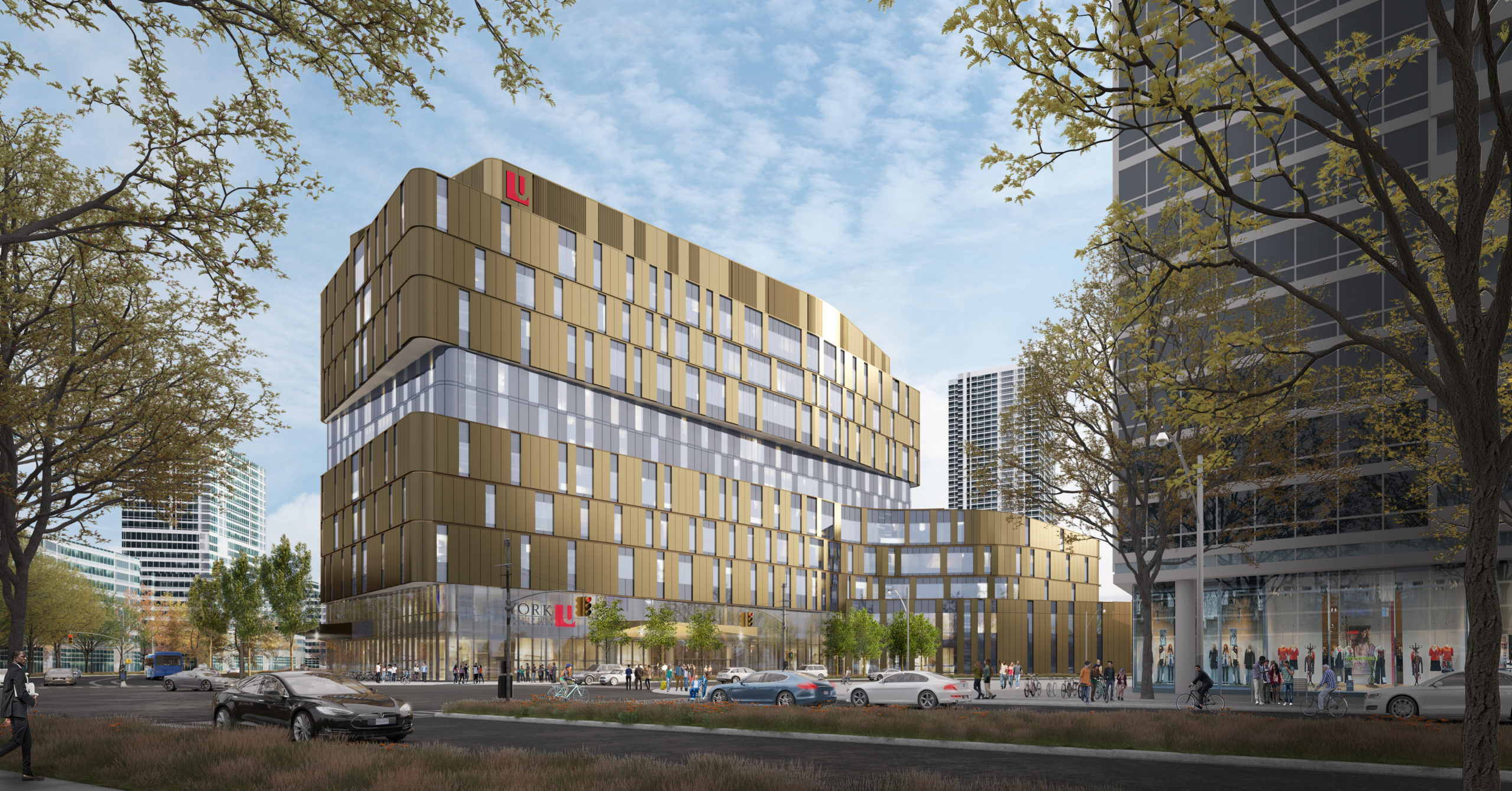 York U broke ground this week on its new ten-storey, $276M Markham Centre Campus, expected to open in fall 2023. York Region projects 34% growth in 18-22-year-olds by 2041, and this campus is located close to downtown Markham and public transit. In the first phase, up to 4,200 students will pursue “professionally relevant degree programs and microcredentials.”  YouTube

uToronto has received a record quarter-billion-dollar donation towards its Faculty of Medicine, which will be renamed for the donors, James and Louise Temerty. “It will extend every single aspect of our programs, transforming education, research and clinical care for decades to come.” Plans include construction of a new building for the Faculty, vastly increased admission bursaries, an elder-in-residence position, and cutting-edge research into AI applications in diagnostics, drug discovery, surgery and patient care.  CBC

BC’s health authorities have announced that young people no longer have to worry about the discomfort of a nasopharyngeal swab COVID19 test: instead 4-to-19-year-olds can do a “mouth rinse gargle” at testing centres across the province. “Getting tested as soon as anybody has any symptoms is incredibly important… Now for K-12 students we have an easier alternative.”  CTV

Finally, there’s hope that we will be able to detect COVID19 before carriers become symptomatic, without the hours-long wait time and without a nasal swab, blood test or even a saliva sample!  Specially-trained sniffer dogs in Finland have been trained to detect COVID19 from a bit of gauze wiped across a person’s skin, and have been deployed at the Helsinki Airport in a trial project. Researchers say the dogs can be trained in as little as 7 minutes, and can detect the disease 5 days before patients become symptomatic, and with “close to 100% sensitivity.” Similar studies are being undertaken in Germany, the UK and UAE. National Post

Waterloo-based DarwinAI has developed an open-source neural network capable of detecting COVID19, and assessing its severity, in moments based on a chest x-ray. Trained on >10,000 x-ray images of lungs, the algorithm looks for variations in air flow. Stony Brook Medicine in New York, and dozens of hospitals around the world, are already using the system to triage and prioritize patients.  Waterloo Record

Naturally, the day after I write about it, newer statistics come out…

UK universities have hit a record 44,300 undergrads enrolled this fall from outside the UK and EU – a 9% increase over last year – according to the UCAS application service. (And UCAS stats usually account for less than half of international enrolments.) Only acceptances from students in the EU are down, about 2%, because of Brexit. Just a few months ago, vice-chancellors warned that a “sector-wide financial crisis” was coming, but enrolments may have been helped by “negative sentiment towards the US,” and the fact that Australia and New Zealand’s borders remain closed. Domestic enrolments have also surged, thanks to the A-levels being waived: 36% of UK 18-year-olds will enroll, also setting a new record. Deferrals rose only slightly, from 5.4% to 5.7%.  The Guardian

Preliminary data from the National Student Clearinghouse, based on 22% of colleges reporting, shows that US undergrad enrolments are down just -2.5% from last fall, but postbaccalaureate certificate programs gained +24.2%, master’s +6%, and doctoral programs +2.1%. The results were particularly encouraging for public universities, who saw an average decline of just -0.4%, and for urban universities the results were in fact slightly positive (+0.5%). Analysts had projected significant declines this fall, and even the -7.5% drop at community colleges is better than many feared. (Although in a typical recession, reskilling students would be flocking to community college programs.)  Inside Higher Ed

“The overall decline of 2.5% for undergraduates is not as bad as many feared, and if it stays that low as more data come in for the fall, I think there would be a big sigh of relief.” – Doug Shapiro, Executive Director, National Student Clearinghouse Research Center

At least for now, uIllinois Urbana-Champaign seems to be winning its fight to keep students on campus, despite a surge of infections in late August due to student parties. UIUC has been testing its 40,000 students aggressively, twice a week, at 17 walk-up testing stations across the campus – conducting 385,000 saliva tests to date. They also “grounded” all undergrads for a mandatory 2-week lockdown after the surge, which seems to have stabilized the situation. Likewise Northeastern U has conducted 147,000 tests and found just 75 positives. The campuses that seem to be succeeding share a commitment to testing asymptomatic students regularly, and are fortunate to be located in regions with low rates of COVID infection. “Testing only symptomatic students doesn’t cut it.”  Chronicle

“The course of the COVID19 pandemic thus far has not been kind to optimists,” observes a new report from McKinsey – particularly when considering the US situation. But we are developing faster diagnostics, exploring 910 drug treatments, and >250 vaccine candidates are in development. (Based on historical trends, about 16% of the 34 candidate vaccines currently in human trials should be successful.) “Normalcy might resume in the first half of 2021, and herd immunity could be reached in the second half.” But only if we stay disciplined, and improve coordination and investments.  McKinsey

The Meek Shall Inherit

Apparently, there is reason to believe that the ocularly-challenged have an advantage in this pandemic, if they wear glasses and not contact lenses. Scientists in China found that patients hospitalized with COVID19 who wore glasses represented just 5.8% of the cases, while 31.5% of the local population. And some COVID19 patients have eye symptoms like conjunctivitis. A controlled trial would be needed to truly draw conclusions. (Either face shields might not be such a bad idea after all, or perhaps people with glasses are just more likely to read and follow precautions?)  Huffington Post

BC Students Save $20M

In mid-September, BCcampus Open Education hit a major milestone, having saved students at least $20M in textbook costs since Fall 2012 when the program began. The calculation is based solely upon textbook adoptions reported by faculty. To date, 593 faculty at 41 institutions in BC have adopted at least one OER textbook.  BCcampus 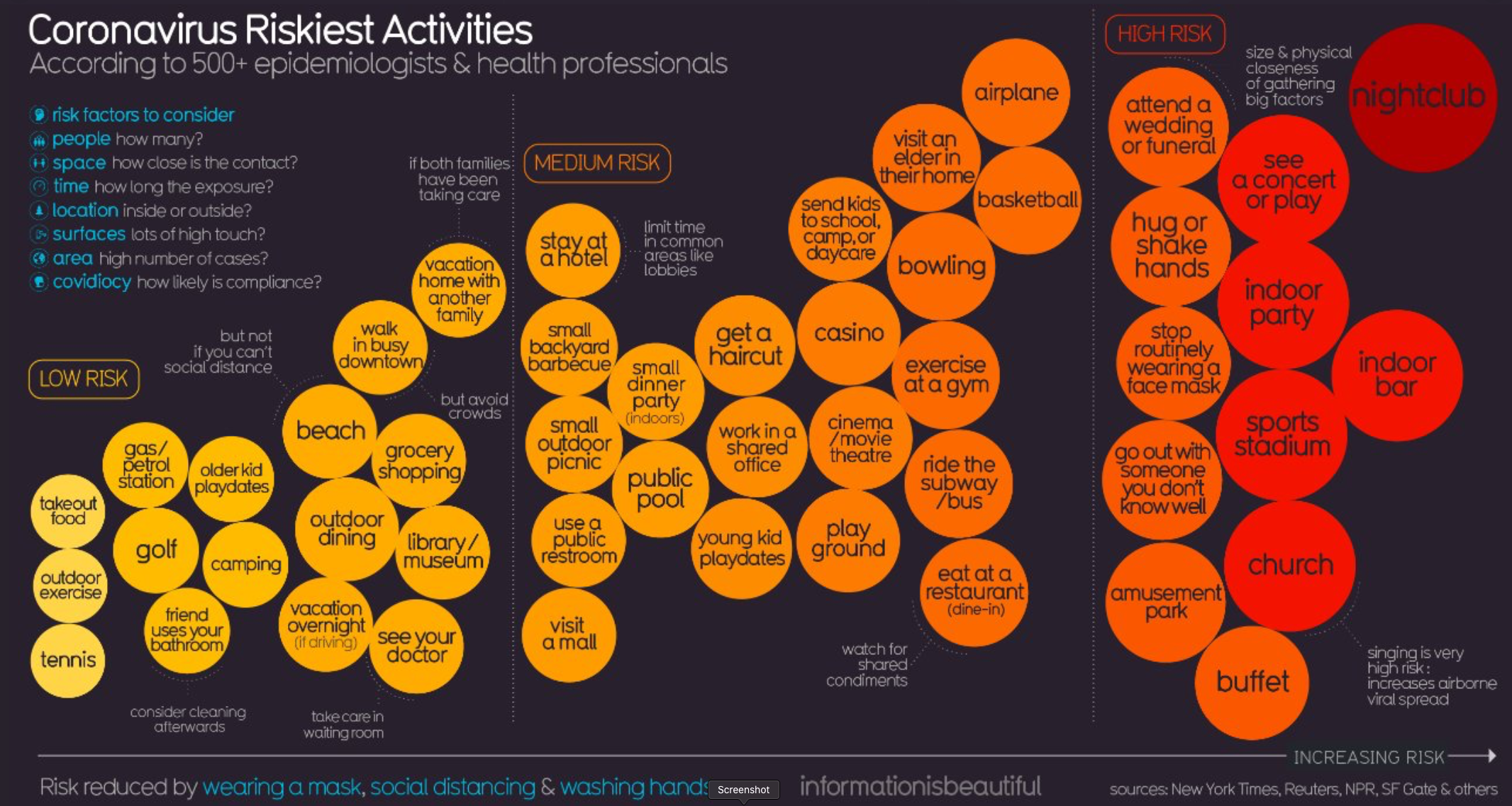 Outdoorsy Types are in Luck

Designer David McCandless has put together an infographic (above) to highlight the most and least risky activities during this pandemic. It’s bad news for bar or nightclub patrons, playgoers or churchgoers – but if you’re into tennis, running, golf or camping, this is your time!  Huffington Post

A global survey of 12,000 youth, aged 18-29, in 112 countries this spring found that, despite the pandemic’s significant impact on education and employment, most remained optimistic about the future. 40% were confident about their future career prospects, and while 38% expressed some uncertainty, just 16% felt fear about the future. Generally men and those who were employed felt more confident, but most confident of all were those whose education was on track. “Amid signs of hope and resilience, almost half of the young people surveyed reported pursuing new training or learning opportunities since the pandemic began.”  World Economic Forum

90-year-old billionaire Warren Buffett says there are 4 choices in life that “separate the doers from the dreamers”: 1) Pick your friends wisely. “Associate with people that are better than yourself.” 2) Go to bed a little smarter each day. “Knowledge builds up… like compound interest.” (Rumour has it that Buffett spends 80% of his daily routine reading!) 3) Improve your communication skills. And 4) Say no! “The difference between successful people and really successful people is that really successful people say no to almost everything.”  Inc

Last week, uRichmond (Va) published a series of 4 vids anchored on key brand attributes: Ambition, Confidence, Curiosity and Drive. Beautiful videography, although there’s not much room for clever copy in just 16 seconds! You’ll get the idea from “Curiosity Thrives Within Us.”  YouTube

uToronto’s 2-min “Welcome to the 2020/21 academic year” vid has the production values and energetic soundtrack of a full-fledged TV commercial, and showcases the campuses, labs, students and alum. Not bad!  YouTube

It’s definitely hard work to hunt down positive stories these days… but hopefully it puts us all in a better mood for the weekend!  Stay safe and be well!