As Canada surpasses 130,000 cases of COVID19, Quebec finally accounts for less than half of them (48%) thanks to what may be a second wave in the west. Still, one concerned parent has created a crowd-sourced website to track cases in Quebec schools. In the US, the first big pandemic wave is fading in the Sunbelt but heading for the Midwest, as cases rise in Iowa, Kansas, North and South Dakota.

Today, let’s take a deep dive into some of the interesting and unusual on-campus precautions being undertaken to make a return to campus possible. But I also have to share some warnings about toilets, testing, and plosives, and some good news like Canada’s first anti-racism policy, positive enrolment news, winter term announcements, and more…

For a change of pace, let’s start off with some good news…

uManitoba’s Rady Faculty of Health Sciences is unveiling what it says is the first anti-racism policy in CdnPSE. The Disruption of All Forms of Racism policy defines multiple forms of racism, the duty to educate, and the right of people to freedom from racial discrimination, harassment or vilification. “Each of us needs to recognize existing racism within our faculty and to take responsibility to eliminate all forms of racism, to promote safe work and learning environments free of racism, and to intervene when witnessing any racism.”  uManitoba

“If a policy does not take race into account in a meaningful way, then racism can remain ‘invisible’ or can be deemed to be nonexistent and therefore allowed to persist and potentially increase.” – Rady Faculty of Health Sciences, uManitoba, Disruption of All Forms of Racism Policy

Redeemer U has released its Reopening Plan for fall, a slick, brightly-coloured web document reflecting the new brand launched last month. One of CdnPSE’s more ambitious plans for “dual delivery” instruction, the plan opens with an emphasis on “Our Shared Responsibility” to follow precautions and show the community CARES (Clean, Assess, Respect, Educate, and Support). Many of the social distancing procedures are typical, although the limit of 50 in-person students is ambitious for a small campus, as is the requirement for PPE within classrooms. Redeemer

uRegina reports a 1.7% increase in students enrolled as of the first day of classes, although official census data is collected later in the month. It appears to be driven primarily by retention, since new domestic students are down slightly, and new international students down more than 50%.  uRegina

Trent U has migrated most courses to virtual or “multi-access” delivery, aside from select classes and labs in science, nursing and social work. But Trent is also offering a first-year seminar course, consisting of 20 students and 1 prof, for students who want to have an on-campus experience. (The course is also being offered online.)  Peterborough Examiner

Containing the pandemic looks tougher and tougher the more we learn…

An increasing number of PSE campuses are testing sewage to identify COVID19 outbreaks early, but we also need to stop and think about the implications: a flushing toilet “aerosolizes fecal matter,” making it a potential disease vector if it has no lid. In fact, a flush spews more than 1 million particles per cubic meter of air, says a Harvard public health prof. “When you flush the toilet, you’re breathing in toilet water, and whatever is in that toilet water — including viruses and bacteria.” Effective ventilation and working U-traps in drains are essential to prevent transmission throughout a building. (We need new decals that urge students to “Close the Lid” – if there even is one!)  Washington Post

“When you flush the toilet, you’re breathing in toilet water, and whatever is in that toilet water — including viruses and bacteria.” – Joseph Allen, Harvard U School of Public Health

On Tuesday it was revealed that Quest Diagnostics, a Florida lab responsible for 22% of the state’s COVID19 test results, failed to report almost 75,000 tests for months, meaning Florida’s case data (which has been alarming anyway) has in fact been under-reported. “It’s rank incompetence on the state and federal level.” Miami Herald

Canada’s federal COVID19 Alert app, which became available in Ontario a month ago, has been downloaded only 2.2 million times – just 15% of the province’s population – and only 100 users reported a positive test result (while 3,000 Ontarians tested positive). Critics have observed that it runs only on late-model Android or Apple smartphones, and the Quebec government has refused to endorse it. Experts calculate that a 60% adoption rate would be necessary to make it truly effective. (It may be futile, but I downloaded it the first day. Of course, I’ve only been out of the house twice since then.)  CTV

If you’ve been reading the Insider for any length of time, you know by now that I’m pessimistic about asymptomatic and aerosol transmission of COVID19, and the futility of enforcing a ban on student socializing, on- or off-campus. But I do sympathize with the administrators at hundreds of campuses across North America, who have spent collectively billions of dollars on health and safety precautions for reopening this fall.

Reserved Seating in the Library

Virginia Tech is offering online seat reservations by library, floor and seat type, to minimize students wandering as they look for a vacant spot. Students check in using their smartphone and a QR code at each seat. Check out the 75-sec demo video on YouTube

uRochester is deploying Occuspace technology to estimate foot traffic based on Bluetooth and wifi signal activity, and to allow students to get a real-time view of occupancy. The system, which has also been installed at UC San Diego, UC Santa Barbara, UC Irvine and McGill U, is anonymous and requires no changes to infrastructure. UR is starting by monitoring patron density in 5 areas of the campus library. Typically 100,000 sq ft can be monitored for less than $15,000 annually. Campus Technology

Monitoring Vitals in the Hall

Alabama State U (among dozens of others) has installed 5 high-tech Draganfly Smart Thermal and Vital Sign screening stations in high-traffic areas, such as the campus food court, to read the temperature, heart and respiration rates of people from 3-4 feet away. Each scanner costs about $20,000. Some experts point out that they do nothing to identify asymptomatic carriers, and are more “a show of force” than something effective – although if they discourage people from coming to campus when they feel symptoms, they could be a good thing. Draganfly is also developing a drone-based version for 6 clients.  CNN

Oakland U in Michigan will require faculty, staff and students on campus to wear a BioIntelliSense “BioButton,” a coin-sized wearable that monitors temperature and heart rate in real time. It connects to a mobile device, and its charge lasts up to 90 days. Of course, >2,000 students have already signed a petition opposed to the idea. Click On Detroit

Alabama State U has also deployed 5 Draganfly AI monitors to track pedestrian traffic on campus in real time, and circle those who are not maintaining 6-foot social distancing. Each Draganfly rig costs about $10,000. (There are loads of other companies offering “dystopian tech” to schools this fall.) CNN

As 20 million university students return to campus in China, many are facing strict rules about how to eat, bathe and travel off campus. Dozens of universities have purchased epidemic surveillance systems, including facial recognition to restrict access, identify those not following mask protocols, and track each student’s body temperatures for 30 days. Cameras have been installed throughout campus dorms, and some students fear the surveillance tech will outlast the pandemic. US News

uWindsor is delivering 98% of courses online this fall, but BFA Acting students will have some half-size F2F performance classes.  Masks will be required, and spacing circles will be outlined on the studio floors to keep students 8-10 feet apart. They are considering specialty masks, plastic barriers or shower curtains so that students can sing. CBC

Safety can be Beautiful

The Virginia Tech College of Architecture and Urban Studies turned plexiglas shields into a colourful design statement, and a work experience for students too. “Let’s try to make this into something that’s not only safe, but beautiful.” Watch it come together in this 2-min video.  YouTube

Drones like those used for crop-dusting are being repurposed in the COVID era to spray disinfect large sports stadiums and indoor theatres. EagleHawk’s system pumps cleaning fluid through a hose to the hovering drone, and can disinfect a Broadway theatre in less than an hour. Drones reduce the need for PPE and worker exposure, and save considerable time and labour. EagleHawk is being used at Cornell U, Wagner College, and others. DroneLife

Since July, the Arabica Smoking Lounge in Montreal has reportedly been home to Canada’s first “intelligent disinfection door.” The $3,150 gate, made by Beijing Sunshine Technology in China, “measures body temperature and purports to kill bacteria with a disinfectant mist, ozone and ultraviolet light.” Although apparently certified by the EU, Health Canada has not authorized the doors for use against COVID19, and UV light is dangerous, but it’s certainly snazzy-looking and apparently reassures patrons. The WHO warns that it would do nothing to stop respiratory aerosols. The owner of the Arabica Lounge has ordered 60 more doors for resale.  Montreal Gazette 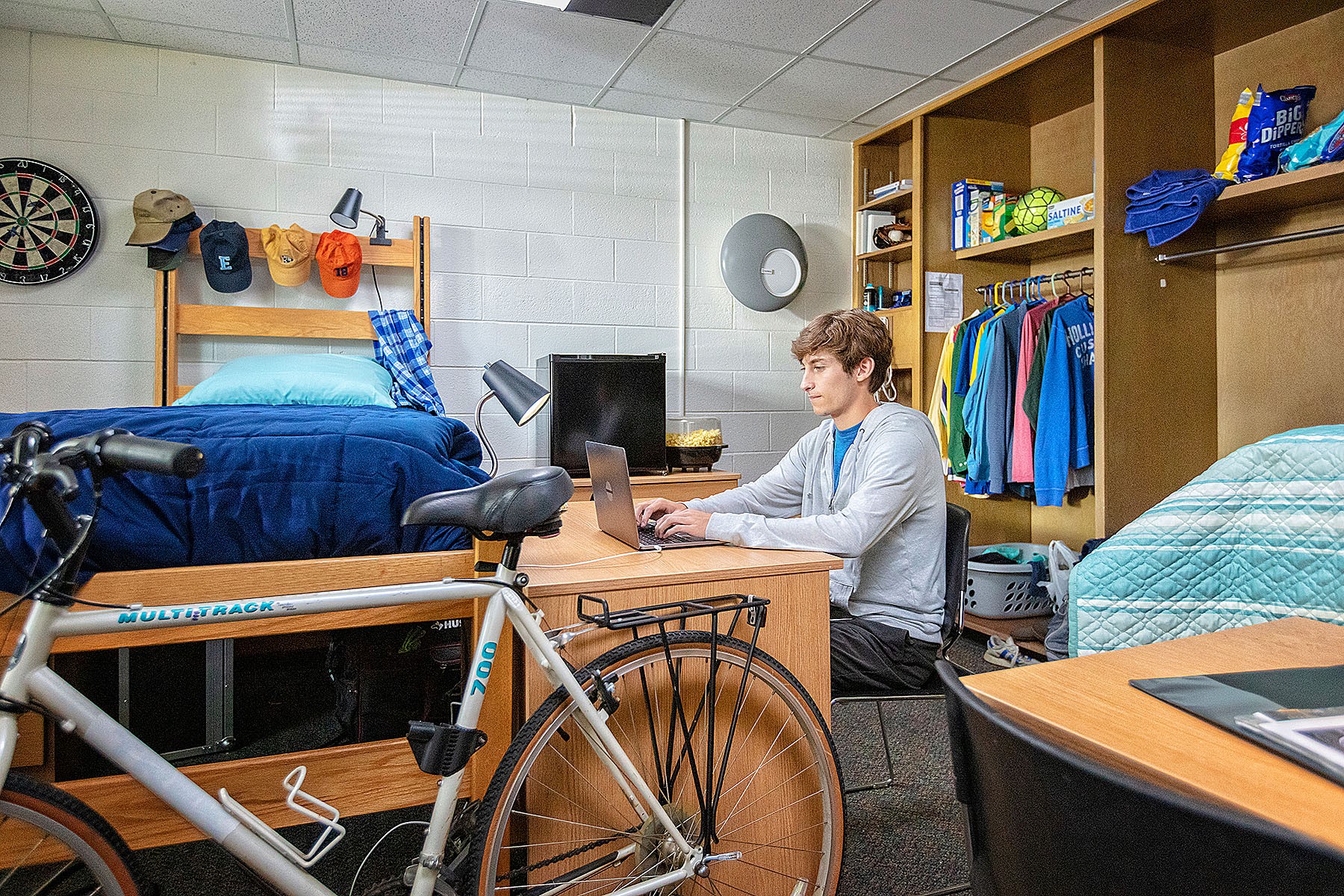 Synexis has deployed hundreds of its patented dry hydrogen peroxide emitters throughout more than 350 facilities worldwide, including campus dorms and recreation facilities at Kansas State U, uOklahoma, and more. The wall-mounted spherical devices convert ambient air and humidity to continuously emit DHP and reduce viruses, bacteria and fungi, in the air and on surfaces. Tests have shown it reduces influenza microbes 99.8% in just 60 minutes.  Synexis

You, too, can be a Snow Trooper 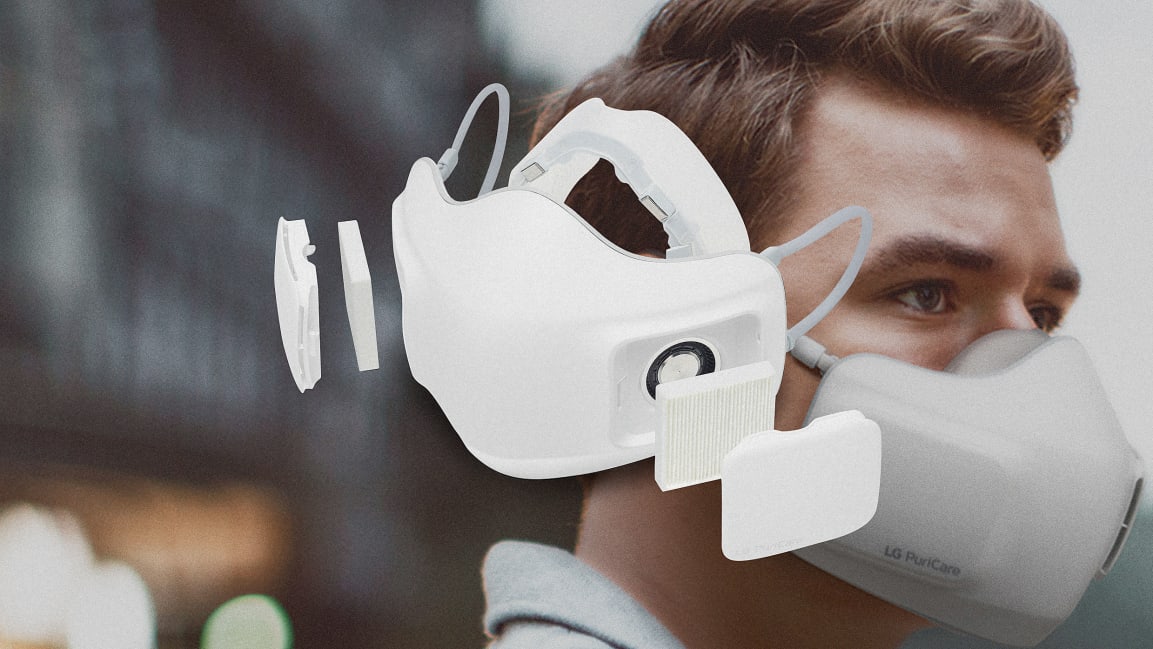 LG has announced an innovative new “breathable” mask, the PuriCare Wearable Air Purifier – “literally a tiny, battery-powered HEPA filter that fits on your face.” It promises “effortless” breathing by monitoring the cadence and volume of your breaths, with fans that spin up to assist when you inhale. Its battery will last 2-8 hours, depending on how much heavy breathing you’re doing. HEPA filters are believed to provide even better protection than N95 masks. It also comes with a UV-sterilizing carrying case. (No word on whether it includes a voice modulator, like those Star Wars toy masks used to have.)  Fast Company

Since my round-up yesterday, a couple more CdnPSE announcements…

Algonquin College announced yesterday that they will “take the same approach for the Winter term as we did for the Fall term,” minimizing F2F instruction and delivering most programs and services remotely.  Algonquin

uVic announced Tuesday that it will “continue to offer predominantly online instruction for the spring term” (Jan-Apr 2021).  uVic

I knew my undergraduate Linguistics courses would prove useful someday…

Mind Your Ps and Ts

For decades, epidemiologists have theorized that languages with aspirated pronunciation (such as English’s plosive consonants, P, T and K) increase aerosol transmission of disease. 17 years ago, a study found dramatically lower SARS rates among Japanese speakers (who have limited aspirated consonants). Researchers in Moscow have confirmed that countries with aspirated consonants are experiencing 20% higher rates of COVID19.  Fast Company

Thanks for reading!  I’ll see those of you who aren’t taking an extra-long weekend tomorrow morning… Meanwhile, stay safe and be well!