This is quite the new reality we’re in, isn’t it? Yesterday morning it was my honour to deliver a faculty in-service virtual keynote at Northern College (to faculty spread across northern Ontario, I suspect). Then in the afternoon, I was delighted to drop in at Saskatchewan Polytechnic’s virtual launch event for their new strategic plan. (I so seldom get to pop by for these events, no matter how much I’ve been involved in the years leading up to them.) And somehow I still managed to get home in time to BBQ dinner, and write this Insider too! As an avid reader of all the Star Trek technical manuals, I’m convinced that matter-to-energy transport is likely never going to happen (even if someone can invent a Heisenberg Compensator) but Zoom is starting to feel like a decent 21st-century substitute!

I want to continue the deep dive we started yesterday, into COVID19 the disease –looking at what we are learning about immunity, treatments, and some optimistic projections for the end of the pandemic. But we’ve also got a bevy of CdnPSE enrolment updates, several new strat plans, and some significant announcements – from a quarter-billion-dollar deficit and a 10-year P3 deal, to social distancing tactics like colour-coded bracelets and safety patrollers. But first (sigh), the latest from south of the border… 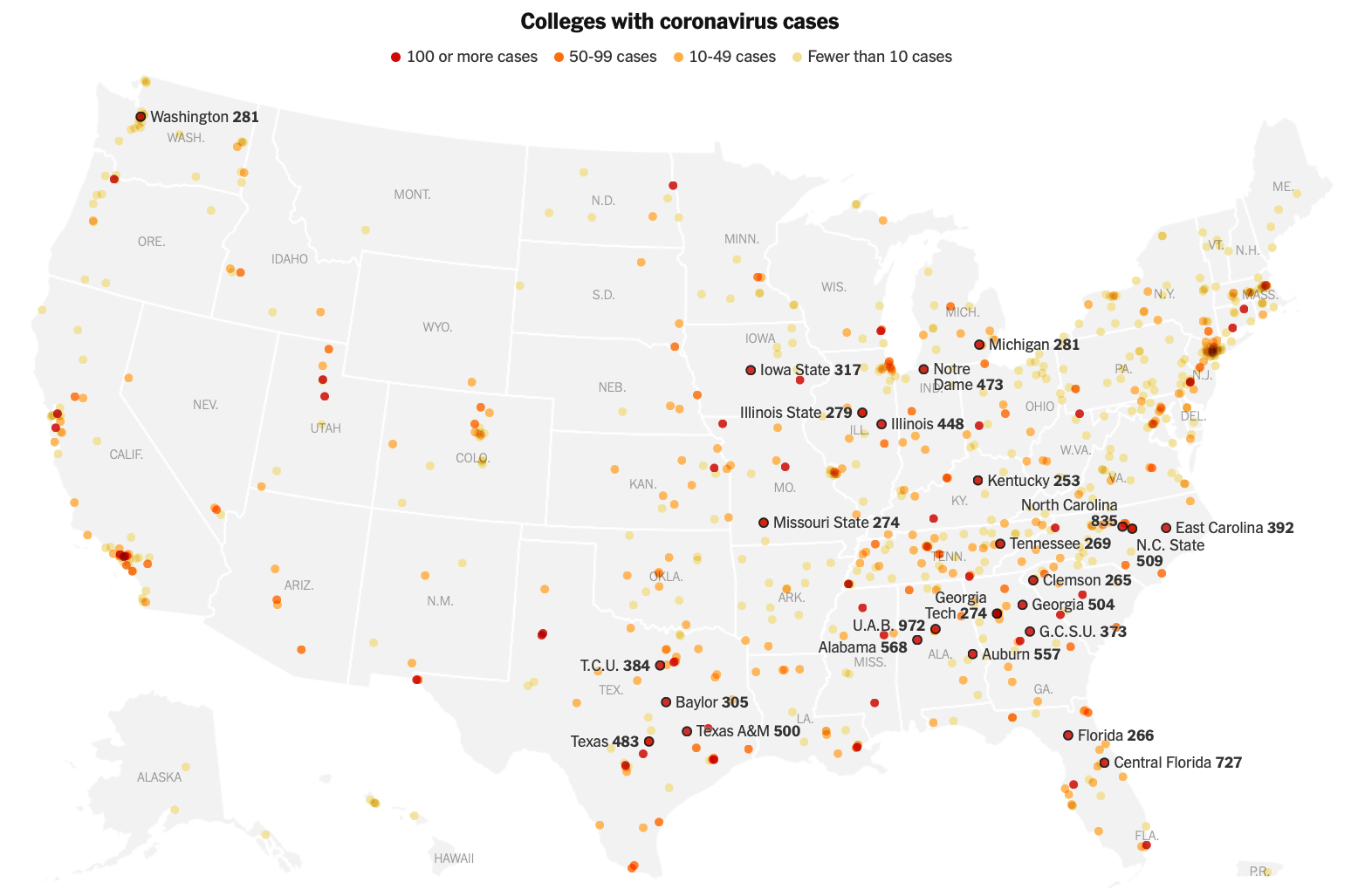 Although we don’t have comprehensive information about Canadian campuses, the New York Times has surveyed more than 1,500 US colleges and universities, and found more than 26,000 COVID19 cases on some 750 campuses. (More than 20,000 of those cases have been added since late July.) Their page includes a searchable database and interactive map.  ­NY Times

North Carolina State U began classes on campus on Aug 10, moved them online 2 weeks later, and has experienced 277 cases of COVID19 in the past week. 1,300 students are in quarantine, and yesterday NCSU ordered almost all of the 6,500 students living on campus to pack up and move out by Sep 6. “The spread of the virus has been unrelenting… It’s simply become untenable for us to continue to offer on-campus housing to such a large number of undergraduates.” ABC

UBC reports that it has fared “comparatively well” financially, projecting a $225 M deficit for 2020-21 in the wake of COVID19, which may cost UBC as much as $138M in tuition and $208M in ancillary revenue.  Business in Vancouver

Ryerson U has announced a 10-year partnership with Navitas to establish a pathway program, Ryerson University International College, grow and diversify international enrolment, improve academic outcomes, and enhance Ryerson’s global reach. Navitas has long-standing partnerships with SFU and uManitoba, and is reportedly negotiating with Western U as well. Ryerson

St Clair College is hiring “safety ambassadors… to patrol the halls and classrooms and make sure everyone is following the rules.” They anticipate about 1,000 students on campus this fall.  CTV

(An obscure Star Trek allusion.) As the US election approaches, the prospect of effective treatments or vaccines carries immense political weight. The FDA seems to be under pressure to endorse unproven treatments. (I want to say “snake oil.) Several documented cases of reinfection within months casts doubt on the durability of immunity. But some experts do believe there is reason for optimism…

Immunity May be Short-Lived

Those hoping that a vaccine (or herd immunity) might bring an end to health precautions may be in for disappointment: researchers in Hong Kong have announced the first confirmed case of re-infection. A 33-year-old man recovered from COVID19 in April, but tested positive again (although asymptomatic) after returning from Spain this month. The case is not definitive proof that immunity is short-lived, however: the two strains were genetically different (as we discussed yesterday). Toronto Star

Yesterday, 2 more patients in Belgium and the Netherlands were also confirmed to have been reinfected by COVID19 within a few months. One had a mild case at first and may not have developed enough antibodies for complete immunity; the other was an older person with a weakened immune system. It remains unclear whether infection or vaccines will be effective, or will simply need to be repeated every year or two. Globe & Mail

Last week, the US FDA granted an emergency use authorization for blood plasma donated by recovered COVID19 patients to treat other patients. The Mayo Clinic has treated 71,000 patients over the past 5 months with promising results – but not in a randomized placebo-controlled trial, so no firm conclusions can be drawn. In a White House announcement, the FDA head claimed convalescent plasma could save 35% of COVID19 patients, but in fact it reduced 13.7% risk to 8.9% risk, and only for a small subgroup of patients who were under age 80 and not on ventilators. “The evidence… is not ready for primetime.” The FDA also issued an emergency use authorization for hydroxychloroquine in late March based on inadequate evidence, and revoked it by mid-June. New Scientist

The WHO is hopeful that the COVID19 pandemic could be shorter than the 2-year Spanish Flu pandemic in 1918, “if the world unites and succeeds in finding a vaccine.” While we have more sophisticated medical science and hospital treatments, we also have a much more connected world in which viruses can spread rapidly. Reuters

Optimism for a Vaccine in 2021

The Trump administration’s “Operation Warp Speed” has committed $8 billion to 7 promising COVID19 vaccines, in the hopes of delivering 300M doses by January. A uVirginia infectious disease specialist shares 9 reasons to be optimistic. Unlike viruses like HIV, the coronavirus can eventually be eliminated by the human immune system, in about 99% of cases. Early trials of 3 vaccines have produced up to fourfold higher antibody levels than in survivors of the virus itself. The virus has multiple vulnerabilities in its spike protein and would have to mutate significantly to evade a vaccine. Phase 3 clinical trials began in July, and industrial scale manufacturing is already under way. Fast Company

We’re continuing to see plenty of positive enrolment reports in the news – although of course, institutions with enrolment declines aren’t likely to issue a media release about it…

Carleton U reports summer enrolment attracted 30% more students than last year, and enrolments for fall are “very similar” to last year. Senate was “supportive” of a plan to deliver the winter 2021 semester online, “with some leeway for selected optional instruction on campus,” and a formal announcement will follow. Carleton

Memorial U reports that its enrolment numbers are “holding steady” for the fall, although international numbers are still “up in the air.” VOCM

Mount Royal U reports a 1% increase in enrolment this fall, despite its switch to largely online classes. About 100 classes, with a max of 30 students each, will be offered on campus starting Sep 3.  Global

Western U has reportedly seen a 29% drop in first-year international students over the past 2 years: CBC claims Western had 1,143 in 2018 and just 816 in 2020. (Uncertainty remains about deferrals for those who cannot enter the country.) CBC also reports that the proportion of first-year international students accepting offers from Western has declined from 19.6% in 2018 to 15.9% in 2019 and just 11.5% in 2020 – when they sent out 26% more offers, anticipating COVID19 challenges. Officials expect to see students arriving later in the year, as travel restrictions ease.  CBC

uOttawa is expecting about 5,000 students on campus for in-person classes this fall CTV, and 1,100 students in residence (about 26% of the usual 4,200). It will open fewer than half of its residence buildings. Move-in begins Saturday. CBC

Loyalist College reports that 65-70% of all its courses this fall have “some element of F2F learning.” YouTube

At welcome-back events across the country, CdnPSE institutions are sharing their visions for the future. Here are three I came across yesterday…

Simon Fraser U officially adopted yesterday the Burnaby 2065 Campus Master Plan, after 2 years of research and consultation. The plan includes a new Biomass plant, expanded athletics precinct, First Peoples’ Gathering House, Art Museum and additional student residence buildings. (The plan works around the UniverCity development atop Burnaby Mountain, which I featured in an episode of Ten with Ken last year.) It also guides future expansion of the campus into existing forest. SFU

At “press time,” our thoughts are with residents and campuses near the border of Texas and Louisiana, who were facing an “unsurvivable storm surge” from hurricane Laura, expected to make landfall around midnight last night. Hopefully the storm’s impact was less serious than feared.

Wherever YOU are, stay safe and be well. It’s almost Friday!