Maybe it’s all the politics, or perhaps all the bad news, but it’s been a long week – which nonetheless went by quickly!

Since it’s Friday, today’s >FFWD looks at something a bit lighter: what the pandemic has done to accelerate pet adoptions and pet industry sales and marketing. I’ve also selected 4 higher ed videos that stood out this week as particularly worth a look, if you have some time during a coffee break today. And of course, the usual crop of CdnPSE campus updates.

But first, let’s get the bad news out of the way…

Austerity on the Prairies

Back in January, when the province of Alberta anticipated a $6.8 B deficit for 2020-21 because of falling energy prices, it made massive cuts to PSE budgets, prompting layoffs of thousands of employees at colleges and universities. Yesterday, things got 4 times worse: the finance minister predicted a record $24.2 B deficit, thanks to the lowest energy royalties in 45 years, and asserted that the government would “cut costs,” not increase taxes. (Maclean’s wryly observes that the province will bring in more from PSE tuition than oil and gas.) And the revised figures do not allow for a potential second wave of COVID19, either. More details will come in November, but they won’t be pretty… Globe & Mail

Also yesterday, Saskatchewan’s finance minister predicted a $2.1 B deficit, which is actually slightly better than the $2.4 B estimated in June. Assuming no further widespread lockdowns, the provincial budget will return to a surplus by 2025, meaning “austerity budgets” in the meantime, but not “cutting” so much as “minding spending.” A provincial election is scheduled for Oct 26; the opposition NDP insists this is no time for austerity. Globe & Mail

Still 3 weeks before classes commence on Sept 14, a student at St Francis Xavier U has been fined $1,000 by RCMP, for failing to self-isolate after arriving in Nova Scotia from outside the Atlantic bubble, as required by provincial law. The student will also be subject to the university disciplinary process. StFX made national headlines for its mandatory student waiver in July. Global

With just 22% of Canada’s population, the province of Quebec has accounted for half of the country’s COVID19 cases, and 63% of its fatalities. Nonetheless, citizens of La Belle Province have the most cavalier attitudes towards the virus and public health measures in the nation, and the government has been determined to reopen schools and require students to attend classes in person – in many cases starting yesterday. Predictably, the repercussions are starting to appear…

Unions for more than 70,000 teachers across the province emphasize that it’s not too late to rethink the back-to-school plan, incorporating a later start and smaller classes. (Earlier in the week, more than 150 Quebec doctors signed an open letter urging similar changes.) The unions claim there is already a shortfall of about 1,000 teachers, due to early retirements and medical exemptions.  Montréal Gazette

In the east end of Montréal, on the very first day that schools reopened, 3 teachers and staff at 3 different schools tested positive for COVID19, and 8 were put into isolation. A fourth employee on the north shore has reportedly also tested positive, and a private school south of Montréal, College Français, sent an entire class home after learning a child’s parent had tested positive.  The province’s top doctor thought the action was excessive. Globe & Mail

In Quebec’s Eastern Townships, near uSherbrooke and Bishop’s U, 49 cases have been confirmed in the past 6 days alone. LaTribune

CEGEP Séminaire de Sherbrooke has reported one case of COVID19 among its students, barely 4 days into the school year. About 40 other students were put into preventive quarantine. Radio-Canada

Some pediatricians have raised concerns that COVID19 tests may not be sensitive enough to accurately detect the virus in children, and certainly there have been many documented cases of false negatives throughout the population. The nasopharyngeal swab test is about 90-95% accurate “if you are shedding virus at that time,” but will not detect infection earlier. “I’m certain that we’re going to find out one day that these symptoms are COVID, even though these kids have swabbed negative.” CBC

A single delegate to a biotechnology conference in Boston back in February may have brought COVID19 from France, but genetic tracing shows that many of the 175 Biogen executives present took it worldwide from there. Researchers estimate roughly 20,000 people in the Boston area may have acquired the virus from that one event, and its “fingerprints” are seen across the US and around the world. The optimal setting for such a “superspreading” event is a lengthy indoor meeting, with poor ventilation and extended contact with many other people. “One bad decision can affect a lot of people.” New York Times

If Reopening were an Experiment…

Two scholars at uColorado Boulder ask, “If a college’s reopening were an experiment… would it be approved by an institutional review board?” IRBs have to weigh the risks and benefits of even the most benign telephone survey involving human subjects (believe me, I have the scars to prove it). So why have IRBs not weighed the added benefits of in-person instruction against the risks to all stakeholders? “Extraneous considerations” like the financial health of the institution must be ignored in such a calculation. And research subjects – in this case, students, faculty, staff, and the surrounding community – would need to provide informed consent, with the option to opt out.  Inside Higher Ed

I’ve got to admit, I’ve been wondering the same thing… But OK, let’s lighten up!

The COVID19 pandemic has accelerated many trends reshaping higher education and our society. Since it’s Friday, and Wednesday was International Dog Day, let’s look at things cute and fuzzy…

Demand for companion animals boomed early in the pandemic, leading to shortages of pets available for adoption at many animal rescue organizations and breeders. Faced with the prospect of extended time at home, in isolation, many people made the decision that now was the time to bring a furry friend home. (Out of a sample size of 2, both my children did so independently this spring.) And pet surrenders are down about 24% from last year. There is concern that animals, particularly rescues, will experience some serious separation anxiety when their owners eventually stop WFH and return to their office or school schedules again. Montréal Gazette

Cats, Puppies and Horses, Oh My!

The SPCA in BC reports that inquiries to adopt cats and dogs have risen about 50% during the pandemic, creating a shortfall and waiting lists hundreds of people long. One dog attracted 60 adoption applications online within an hour. They have placed about 4,500 animals – mostly cats, kittens, dogs and puppies, but also smaller rodents, horses and farm animals. With fewer animals in their shelters, it has been easier to observe social distancing precautions and bring fewer employees on the premises too. Vancouver Sun

Historically, people spend more on their pets during an economic downturn. Multiply that by increased pet ownership, and pet supply manufacturers are in for a busy year! Online retailer Chewy has hired almost 10,000 new employees for its fulfilment centre to meet a 36% increase in sales. Subscription service BarkBox has seen sales increase, while they have tried to be extra flexible about payment terms. Even animal videos, the “killer app” of social media, are booming: The Dodo has seen YouTube views and watch time increase more than 170%. AdWeek 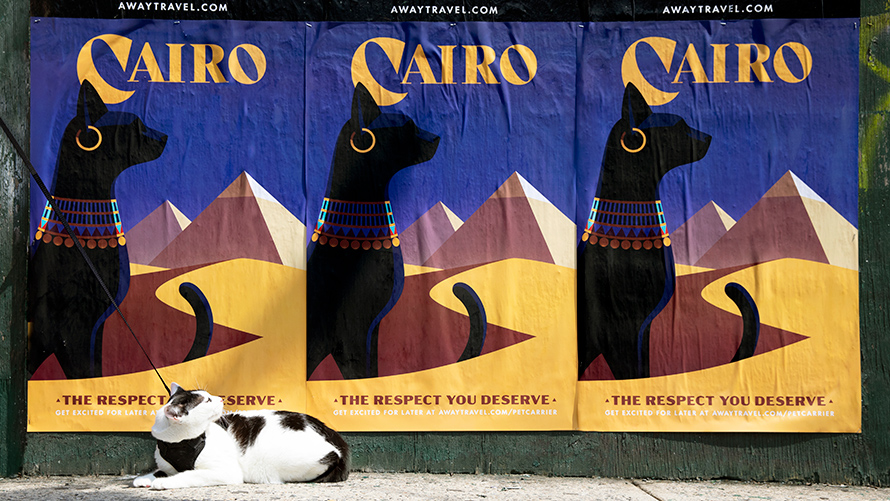 And if pet owners aren’t spending enough, luggage brand Away is marketing new pet carriers directly to the animals: if humans are dreaming of vacationing again, surely their pets are too? Away is running retro-style OOH travel ads in 4 “pet-dense” cities (Boston, Chicago, New York and San Francisco), with scented travel posters low to the ground (“at nose level”) near popular dog parks. Egypt is a place where cats can find “the respect you deserve.” In Yosemite, dogs can pee on a sequoia. They have also partnered with some animal influencers on Instagram, like Lionel the Hedgehog. AdWeek

Campus housing has had plenty of requests to bring companion animals along into residence in the past – will the Great Pandemic of 2020 accelerate that trend? Will dog owners get more exercise, and better life balance? Will they prefer more WFH? Will we see more volunteers for “bring your pet to work day” and for campus therapy dog programs?

Brandon U will enter the fall term in “Phase Blue,” its most cautious level of strict constraints, with campus mostly closed to students and completely closed to the public. Masks are mandatory. Brandon

Cambrian College says it is the first in Ontario to offer a November intake for its flexible graduate certificate programs in several management disciplines. Cambrian

uLethbridge plans to continue with virtual celebrations for its fall convocation. uLeth

Olds College has announced that face coverings are mandatory for all on-campus indoor public spaces. Olds

uOttawa says it will be the first Ontario university to open its own COVID19 assessment centre, dedicated to its own campus community. It expects two-thirds of its researchers back on campus next month, about 5,000 students, and some faculty and staff. uOttawa

As usual on Friday, I share a handful of higher ed videos that stood out, from thousands this week just #ICYMI…

Speaking of puppies, Northeastern U released a really peppy 1-min public health video called “Hey, Huskies!” It explains how Huskies can “protect the pack” with masks, distancing, testing and hand hygiene. If you like dance beats and bright colours, check it out. YouTube

Ohio State U released a much gentler 1.5-min pro-mask video this week, “What’s Your Why?” in which students explain why they will do what it takes to stay safe and healthy on campus. In many ways it’s a lot like hundreds of others I’ve seen this month, but it is much better produced than most. YouTube

Saskatchewan Polytechnic released a dynamic 50-sec brand video with the launch of their new strategic plan on Wednesday. “Leading the RISE: Bringing Polytechnic Education to New Heights.” It’s worth a watch!  YouTube

uLa Verne (CA) management professor Louise Kelly makes a decent case that, just as businesses that invest during a recession are the ones that outperform afterwards, students should invest in their education now so they are ready when the economy recovers. (1 min)  YouTube

Somehow, that turned out to be a longer issue than I expected… but you have all weekend to digest it if necessary!  I’ll try to get some serious reading in before Monday’s edition.

Until then, stay safe and be well!