Losing It, Losing Out, and the Upside of Feeling Down

To try to foster a good mood for the weekend, I thought I would try NOT to think about the campus chaos in the US, or the latest political outrages on Twitter. Instead, let’s step back – waaaaay back – and take the long view.

Today, let’s look at global demographic trends to the year 2100. Although certainly there’s bad news in there for Millennials. And Boomers, Australians, Indian females, Republicans, and Europeans. Oh, and potentially community college enrolments.

In fact, I hadn’t considered that high school drop-out rates would likely increase as a result of the COVID19 disruption, so add that to declining demographics, economic weakness, and uncertainty about campus delivery… and things could look pretty bleak for a few years, especially for less selective institutions.

Sigh. So it’s hard not to fall back into pessimist territory – but at least there’s research to suggest that pessimism gives you a survival advantage!

It looks as though the spread in the world’s second-largest COVID19 hotspot, Brazil, may be about to slow – but they are still reporting more than 49,000 new cases a day. India, the #3 country, hit a record high of 69,000 new cases yesterday, and France and Spain also hit 4-month highs this week – prompting the WHO to warn that Europe may see a resurgence now that PHO restrictions are easing. As they said back on Tuesday, we are clearly “nowhere close” to herd immunity.

The UN warns that more than 1 billion students worldwide face a “generational catastrophe” because of pandemic disruptions to education – disproportionately affecting those with disabilities, from low-income, remote or racialized communities, and exacerbating pre-existing inequality. CTV

As a result of the pandemic, Australia’s population in 2030 could be 1 million fewer than previously projected, resulting in an aging workforce and a $117B annual cost to the economy. Like Canada, Australia has relied on immigration for much of its growth, but they project an 85% decline in 2021. Even if a vaccine is found within 12 months, KPMG estimates the shortfall in population would be about 420,000. They recommend the aggressive recruitment of international students, with streamlined pathways to residency. ABC

uWashington research suggests that population declines in India and China could be more rapid than previously thought, thanks to more accessible education and contraception. As a result, the global population will peak just after mid-century (see graph above). African population will triple by 2100, and Nigeria is expected to be the second-largest nation on Earth, ahead of China, by 2094. Net migration is expected to keep the populations of Canada, Australia and the US fairly stable, despite low fertility levels. WEF

Between 2017 and 2030, almost 7 million fewer female births could occur in India because of sex-selective abortions. This could have a significant impact on the global sex ratio in the coming decade, when India is expected to overtake China as the world’s most populous country. New Scientist

The De-Aging of America

US colleges have known for a decade that a steep decline in traditional-aged students was coming in 2025. (They were all born by 2008 after all.) But last year’s enrolments were already softening, and now COVID19 has not only made it more difficult to recruit college students, but the shift to remote instruction may well drive a surge in high school drop-outs too. In some cases, half of K-12 students are skipping their Zoom classes. Those at-risk students might well have headed to rural institutions, community colleges or universities with an access mandate. Add to that the economic pressures of the recession and “decreased consumer confidence,” and EAB projects US first-time enrolments could drop by almost a third by 2025 (see graph below). EAB 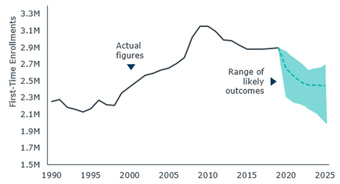 US Census data reveals that Generations Y and Z, the 166 million racially diverse people born since 1981, are now the majority in America, and poised to take over influential roles in business and government. Just 162 million Americans are aged 40+, members of the Gen X, Baby Boomer and older cohorts. The young majority are bearing the brunt of the recession, job losses, evictions and systemic racism (this is “the second stage of a double economic whammy” for older millennials) – but they also make up 62% of eligible voters in the US… NY Daily News

Boomers are Losing It

The average cognition scores of adults aged 50+ increased between 1890 and 1947 – but began to decline with early Baby Boomers (born 1948-53) and declined even further for the later Boomers (1954-59). The “shocking” decline is seen across genders, ethnicities, education and economic levels, says an Ohio State U sociologist – although it tends to be associated with loneliness, depression, inactivity and obesity. (The test used sounds much like the infamous “person, woman, man, camera, TV” test Donald Trump has bragged about.) Science Daily

The Upside of Feeling Down

(With apologies to Thomas Homer-Dixon’s excellent book.) A Stanford biological anthropologist argues that undervaluing optimistic long-shots and overestimating the likelihood of bad outcomes may have given pessimism an evolutionary advantage. (Assuming, of course, that it didn’t stop pessimists from having children at all.) Economists often argue that the poorest people “have nothing to lose,” but in fact they can be “especially risk-averse,” contradicting the theory of expected utility. “Any time where you have to avoid zero, pessimism will pay off, because you’d rather leave money on the table than run the risk of going extinct.” Futurity

Universities sound fairly bullish about enrolments this Fall, although things won’t be entirely clear until after the course withdrawal dates…

Overall, Ontario universities report a 2.26% increase in confirmed first-year students this fall (107,001 this year, 104,635 last fall). This does not reflect upper-year or graduate enrolments, and of course it is not spread evenly across the province. Global

Laurier reports “very strong” interest in its 2020/21 programs, and an increase in the number of incoming students who considered WLU their first choice. Enrolment is “in line with our expectations,” although students are “now in the process of making their final decisions in unusual and challenging circumstances.” Global

uLaval reports preliminary data that shows a 4% increase in CEGEP graduates enrolling, although the data won’t be confirmed until Sep 30. Courses will be delivered in 6 modes, with the majority hybrid or co-modal. Laval

uWaterloo reports that “fall enrolment appears to be up,” although they won’t have official numbers until Nov 1. Global

With far more hands-on, trades and technical programs, many Ontario colleges are more anxious about enrolment declines this fall. (In the past few months we’ve heard some brutal scenarios being considered at Sheridan and Conestoga, for example.) It has always been true that universities can lower their admission cut-offs and scoop students out of the college pool, whereas colleges have no such option.

Face mask policies are being intensified on campuses in BC, QC and PEI, while remote working is being extended to the end of 2020…

uAlberta’s new president, Bill Flanagan, advised the community that “most of us who are currently working remotely will continue to do so until at least Dec 31,” and that a decision about the Winter term will be made by November. uAlberta

uCalgary reports an employee in “Science B” tested positive for COVID19 4-7 days ago, but they “were not on campus when they were infectious.” uCalgary

Holland College (PEI) launched Phase 3 of its Ease-Back Plan on Thursday. Face masks are now “strongly recommended” and a daily self-assessment is mandatory. More than half their full-time programs will be blended. Holland

Montréal’s 12 CEGEPs plan a “variable” approach to resuming classes this fall, with some students in class regularly, others purely online, and others taking hybrid courses (particularly at Dawson College). On campus precautions will include physical distancing, face masks, and even goggles “where necessary.” Some institutions are aiming for 30% of students back on campus, while others “want a maximum presence.” (Thatsounds worrying…) Montreal Gazette

Selkirk College (BC) announced yesterday that face masks will be mandatory on all its campuses in all indoor common areas and “where physical distancing is difficult to maintain.” The College ordered 6,000 masks from a local quilting shop for staff. Selkirk

Acadia U announced yesterday that the provincial government now requires all students arriving in Nova Scotia from outside the “Atlantic Canada bubble” complete an online check-in, self-isolate for 14 days, and get 3 COVID19 tests during that time. There will be a testing facility on campus. Acadia

Dalhousie U announced the same requirements yesterday, although the testing will be scheduled by Nova Scotia Health, and may be off-campus. Dal

Queen’s U provost Mark Green emphasized yesterday the important role of students in containing the pandemic, and their responsibility to test negative before leaving home to move to Kingston. Quarantine is “strongly recommended” for Canadian students upon arrival, and mandatory for international students. (Ontario is requiring students arriving from outside Canada be tested at least once during the quarantine as well.)  Queen’s Gazette

If you’ve read this far, you’re obviously one of those people who prefers the burden of knowledge to the bliss of ignorance…  Thanks for reading, and have a safe and restful weekend!